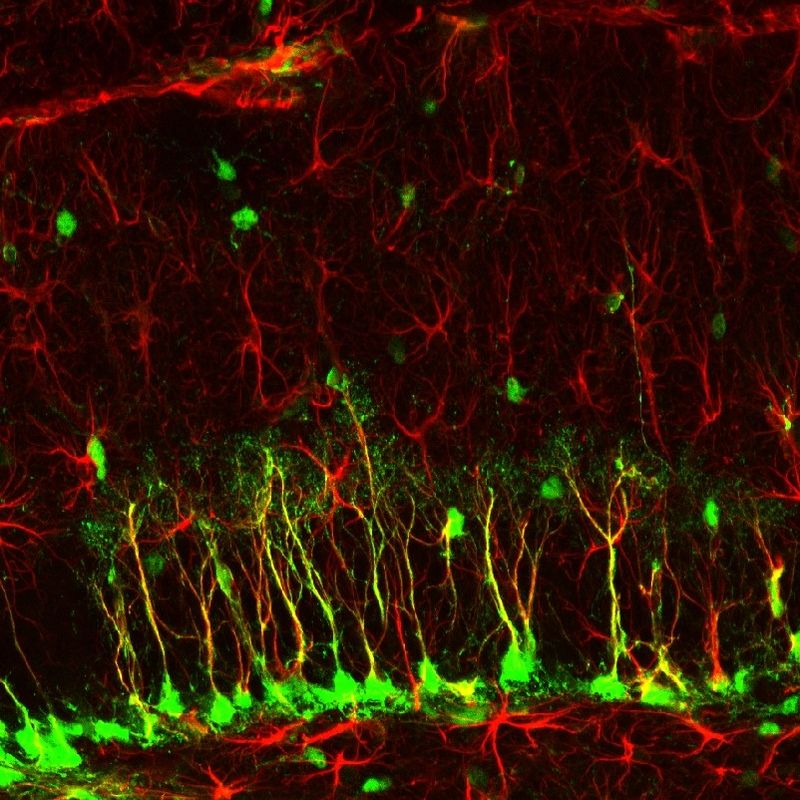 Neurogenesis is the creation of new neurons in the brain. Some scientists think that it may improve memory and help with anxiety and depression, though this is still an active area of research. One thing’s for sure: the brain continues to birth new neurons throughout life. Get reading to finally understand the science behind it.

Neurogenesis is the birth and growth of new neurons, which was originally believed to be absent in the adult brain [1].

“In adult centers, the nerve paths are something fixed, ended, immutable. Everything may die, nothing may be regenerated.” – Raymon y Cajal (doctrine of late 19th to early 20th century)

This was taken for granted late into the 20th century, and any opposing findings were met with skepticism [3].

Image: the first evidence of hippocampal neuron generation in an adult mammalian brain [4].

A 1961 study showed that neurogenesis occurs in the brains of adult mice. Two years later, neurogenesis was found to occur in the hippocampus of adult mice and cats. This discovery was mostly ignored, though, as it seemed just too far-fetched to dogma-entrenched scientists of the days [5, 6].

With the development of new technologies in the 1990s, hippocampal neurogenesis was finally proven to happen in monkeys and humans. Centuries-old dogma was crushed once and for all. Neurogenesis was established as a scientific concept [7].

Nowadays – having neuroimaging and other modern technologies at our disposal – neurogenesis is far easier to measure. It’s opened a whole new field of research important for advancing our knowledge of the brain in both health and disease [7].

We now know that neurogenesis occurs in two areas of the adult human brain: the dentate gyrus (DG) of the hippocampus and the subventricular zone (SVZ) of the lateral ventricles [8].

The function of the SVZ is still relatively unknown in humans. Researchers think that new neurons travel from there through other brain areas to reach the olfactory bulb, where they can become interneurons – neurons placed between other neurons to strengthen the brain circuitry and ensure good communication [9, 10].

The olfactory bulb is critical for detecting and distinguishing smells [11, 12]. It also seems to be used to process pheromones [13] and monitor amino acids (leucine, tryptophan, etc.) [14].

Interestingly, some scientists think that olfactory impairment may be a marker of presymptomatic Alzheimer’s disease, though this hasn’t been sufficiently proven [15]. Still, an experimental hypothesis posits that impaired neurogenesis may be implicated in Alzheimer’s and other neurodegenerative diseases.

Studies suggest that stem cells and precursor cells (similar to stem cells but more restricted in what they can turn into) are needed for neurogenesis. They are essentially “blank slates” that are able to develop into neurons and other brain cells [16].

Evidence of Neurogenesis in Other Brain Regions?

Recent research suggests neuronal proliferation and differentiation might occur in other parts of the brain too. The evidence is still highly inconclusive and most scientists consider it insufficient [17].

One group of scientists found cells similar to those collected from the hippocampus and SVZ in the cerebral cortex, septum, striatum, spinal cord, hypothalamus and white matter [18]. Based on these findings, they suggested the occurrence of the first stages of neurogenesis in other brain areas.

The evidence for new neurons in areas other than the two established regions is controversial.

Scientists explain that this is due in part because of the difficulties that come with analyzing the neuronal cells that divide slowly or infrequently. There are questions of what constitutes proof that a cell is newly born and if it is, in fact, a neuron [17, 24].

This post explores associations between neurogenesis and aspects of health.

The majority of studies we discuss deal with associations only, which means that a cause-and-effect relationship hasn’t been established.

Nor does it mean that increasing neurogenesis (and consequently, hippocampal volume) will improve mood, unless clinical data about a direct link are available. However, data are lacking to make such claims.

Additionally, even if a study did find that poor neurogenesis contributes to depression, a lack of neurogenesis is unlikely to be the only cause. Complex mood disorders like depression always involve multiple possible factors – including brain chemistry, environment, health status, and genetics – that may vary from one person to another.

Neurogenesis Is Not Just the Birth of New Neurons

More broadly, neurogenesis is not just the birth of new neurons. The term can also encompass neuronal differentiation, survival, maturation, and the integration of new neurons [2]

Science suggests that this process is most active during prenatal development and has a lot to do with neuroplasticity, an umbrella term for the brain’s way of reorganizing itself and forming new neural connections [2].

Researchers think that children’s high neuroplasticity is why they have such an easy time learning languages, and why it’s a hot field of research. Still, the link between neuroplasticity and neurogenesis is not so straightforward. One does not necessarily equal the other, and most of the research is still is the very early stages [2].

Neurotrophins are a subtype of growth factor proteins that help to promote the survival of neurons – in other words, they act as brain food (neuro=brain, trophic=food or nourishment) [26].

Growth factor proteins are thought to signal particular cells to survive, differentiate, or grow. They include:

Focus on the Hippocampus

What is the Hippocampus?

The hippocampus is a part of the brain that is thought to play a key role in learning and memory, spatial navigation, and control of emotion [27].

Why Does the Brain Increase Neurogenesis in the Hippocampus?

Additionally, the hippocampus is connected to other areas of the brain implicated in mood, emotional balance, cognition, and decision-making [29].

Reduced hippocampal size has been associated with schizophrenia, depression, anxiety, and epilepsy. However, a causal relationship hasn’t been established [30, 31, 32, 33, 29].

Damage to the hippocampus can be caused by head trauma, stroke, seizures, and Alzheimer’s disease. Some studies suggest that oxygen deprivation, infections, stress, and inflammation can also damage the hippocampus and reduce neurogenesis, though more research is needed [34, 35].

In 1953, the link between the hippocampus and long-term memory formation was first hypothesized, after an epileptic patient had surgery to remove parts of his hippocampus. The patient developed severe amnesia after the surgery [36].

Many other studies have since shown that the hippocampus helps create new memories, though the role of neurogenesis in this process is still elusive. Some neurons die after being created while others are ensured long-term survival and integration within the existing brain architecture [37, 29].

Nonetheless, most researchers think that learning and memory require structural changes in the hippocampus. Neurogenesis is a likely candidate, though studies have had mixed findings [29].

The hippocampus is one of the first areas of the brain to be affected by Alzheimer’s disease. Studies suggest that cell loss in the hippocampus leads to confusion and memory loss in the early stages of the disease [38].

Researchers are investigating whether neurogenesis in the hippocampus is a worthwhile therapeutic target in [39, 40]:

However, we are still at a lack of answers. Some consider the hippocampus might turn out to be a brain biomarker, one that could tell doctors whether a given treatment is working or not. No solid science backs this up yet [41, 42].

Some research teams have proposed neurogenesis as a potentially therapeutic strategy for stroke and traumatic brain injury (TBI). However, research is mostly limited to animals [43, 44, 45].

Further studies need to clarify the relevance of neurogenesis after traumatic brain injury in humans.

Scientists have hypothesized a link between BDNF-induced neurogenesis and cognition. But recent research has shattered that view [47]. BDNF, when overexpressed in the forebrain, seems actually cause learning and memory impairments. More research is needed.

According to one hypothesis, reduced brain plasticity in adulthood is a feature, not a defect.

To be sure, there’s a balance to strike. In line with this theory, only new neurons that survive to be integrated into the brain structure can support cognitive function. Human studies have yet to test if this theory holds [48].

While there’s nothing definitive in mammals yet, scientists have seen something similar happen in songbirds: when neurogenesis occurred in their song nuclei, it peaked when they acquired new songs [49].

The authors explained that these new neurons were not stagnant, they were operable, useful brain cells [50].

The Case of ECT and Seizures

Unfortunately, just because neurons have formed doesn’t always mean they’re performing properly. That’s one of the reasons why the effects of electroconvulsive therapy (ECT) on brain physiology puzzle the scientific community. ECT seems to increase neurogenesis but it’s also known to cause widespread cognitive side effects [48].

Also, prolonged seizures have been shown to worsen cognition, even though they increased irregular adult neurogenesis in the dentate gyrus. Neurogenesis was also linked with an increased number of epileptic episodes [51, 52].

Could this explain some famous hallucinatory epileptic experiences from the literature? Writer Fyodor Dostoevsky described this feeling through one of his characters in the novel “The Idiot,” through Myshkin’s character:

“…there was a moment or two in his epileptic condition almost before the fit itself…when suddenly…his brain seemed to catch fire at brief moments…His sensation of being alive and his awareness increased tenfold at these moments which flashed by like lightning. His mind and heart were flooded by a dazzling light…culminating in a great calm, full of understanding…” [53]

Modern science has yet to understand when and why adult neurogenesis is functional and when it may be detrimental. Targeting and controlling these processes might turn out to be a worthwhile medical endeavor, but far more research is needed before it becomes a reality.