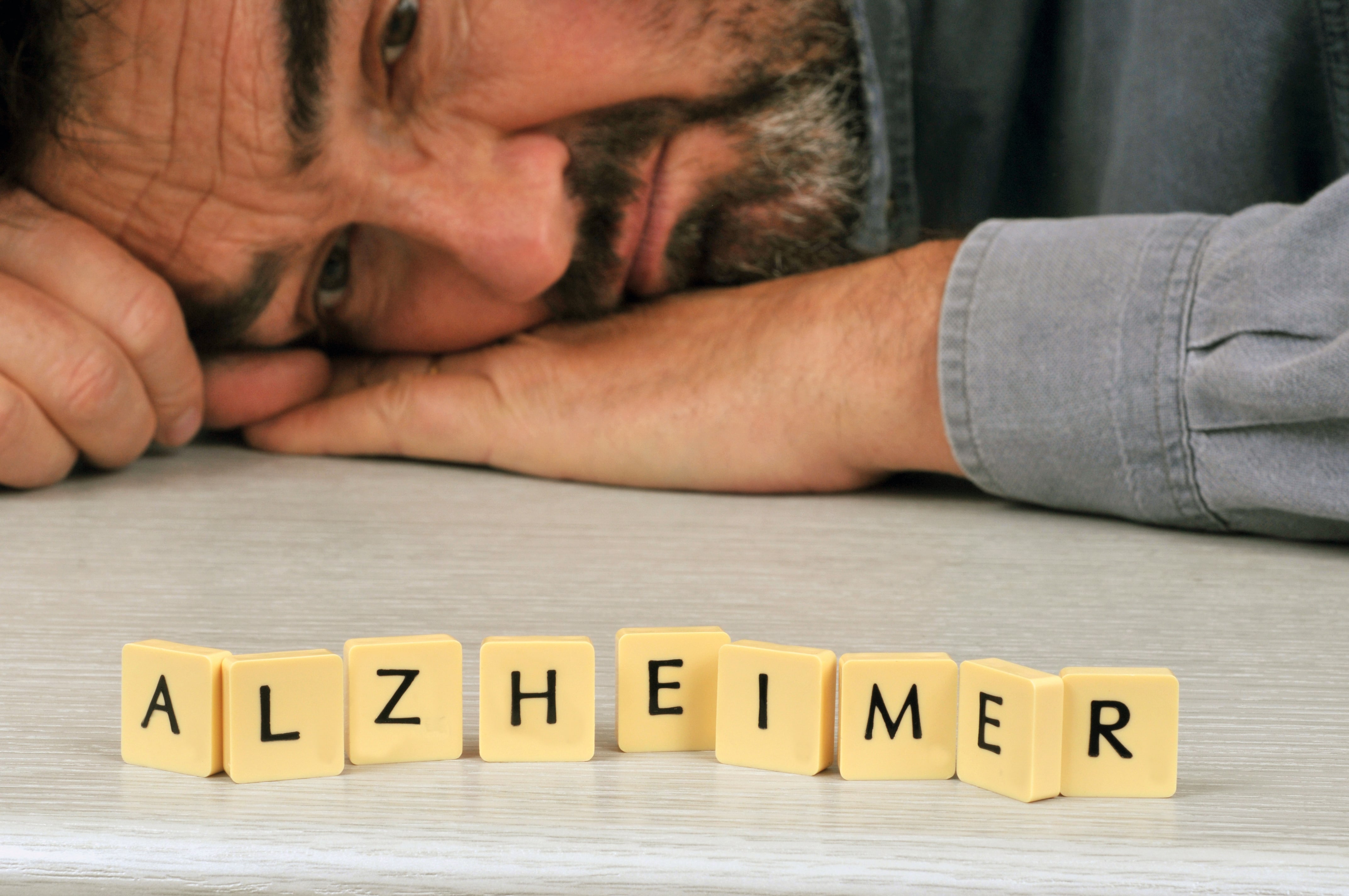 Alzheimer’s disease develops slowly, over several years. It is thought to be a disease of the modern, unhealthy lifestyle. Though Alzheimer’s is commonly diagnosed in people over 65 years old, many people nowadays start to experience signs of cognitive decline at a younger age. Read on to learn about the signs & symptoms, diagnostic tools, and conventional treatment options.

What is Alzheimer’s Disease?

You may have landed here from one of our posts from the Alzheimer’s series. If so, you know about the lifestyle and genetic factors that may underlie Alzheimer’s, as well as the ways in which you can naturally prevent and improve this disease.

In this post, you’ll get a run-through of the basics: the signs and symptoms of Alzheimer’s, diagnosis, progression, and more.

Alzheimer’s disease (AD) is a progressive degenerative brain disease. That is: Alzheimer’s gets worse with time. The brain is thought to undergo small changes decades (20+ years) before the first symptoms show [1].

Only after years of these incremental brain changes do individuals notice symptoms, such as memory loss and other cognitive problems [1].

The symptoms of Alzheimer’s disease occur because brain cells and the connections between them (synapses) become damaged, especially in areas of the brain responsible for memory and reasoning [1, 2].

The brain, especially the areas responsible for cognition, undergoes small changes in Alzheimer’s disease decades before the first symptoms arise.

With time, the damage becomes pronounced enough to cause symptoms. As the damage progresses, symptoms increase and start to interfere with daily functioning. At this stage, a person is said to have dementia due to Alzheimer’s disease [1, 2].

Alzheimer’s can damage neurons in other parts of the brain, such as the areas that control movement. Activities that used to be central to a person’s identity, such as going to family events or physical activity, are often no longer possible at this stage [1, 2].

Ultimately, neurons in parts of the brain that handle basic bodily functions, such as walking and swallowing, are affected. People in this final stage of AD require constant care, and eventually, the person afflicted dies from the disease [1].

About 95% of Alzheimer’s cases are so-called “late-onset” or “sporadic” type, usually diagnosed in people aged 65 years or older. The remaining 5% of cases are termed “early-onset” or “familial Alzheimer’s Disease” and are due to rare genetic mutations. In early-onset Alzheimer’s, symptoms normally set in from age 30-65 [4].

In this series, we will mainly discuss the late-onset form of Alzheimer’s disease.

The Global Burden of Dementia

Currently, there are 40-50 million cases of dementia worldwide. That number is increasing by 1 every 3 seconds, so that in 20 years the number of cases will be doubled [5].

More women than men (27 vs 17 million) had dementia in 2016, and dementia was the fifth leading cause of death globally, accounting for 2.4 million deaths [5].

An estimated 28 million years of life and productivity were lost due to dementia worldwide from 1990 to 2016. Of these, 6 million could be attributed to preventable risk factors such as obesity, high blood sugar, and smoking [5].

The number of dementia cases is on the rise worldwide. Dementia is the fifth cause of death globally, and it can shatter the work capacity and health of whole nations.

The Stages of Alzheimer’s Disease

At this stage, the brain and cerebrospinal fluid undergo measurable changes (known as biomarkers), but symptoms are not yet noticeable. This stage may begin decades before any memory loss. Additionally, not everyone who experiences these brain changes will go on to develop the disease [1].

At this stage, people undergo both measurable brain changes (biomarkers) and experience symptoms of cognitive impairment. The decline in thinking abilities may be noticeable to friends or family, but it will remain unnoticeable to someone who doesn’t know the person well [1].

At this third stage, noticeable memory, thinking, and behavioral problems become evident, along with characteristic brain damage. The cognitive impairment is severe enough to interfere with daily functioning [1].

While the dementia is still mild, patients may be able to drive or work independently. However, moderate dementia causes difficulties with daily tasks such as bathing or dressing. Incontinence and personality changes may also arise. When dementia becomes severe, patients are likely to require constant care [1].

Duration of the Illness

Memory loss that interferes with daily functioning is the most common symptom of Alzheimer’s disease (AD), especially in the early stages when dementia is mild [1].

Since AD causes a slow but progressive decline in memory and thinking ability, people who are afflicted may experience a range of cognitive symptoms, including all of the following [1].

Losing sense of time or place:

Problems with speaking or writing:

Withdrawing from work or social activities:

In the most severe stages, patients ultimately develop a severe loss of mental function due to brain degeneration. All patients are completely dependent on a caregiver and can only communicate with simple words or phrases [7].

There is no definitive biological test that can diagnose Alzheimer’s disease at present. Doctors will, therefore, use other tools to diagnose AD, including [1]:

A biomarker is a measurable biological change that can confirm the presence or absence of a disease. For example, high blood sugar is a biomarker of diabetes. Some potential biomarkers that are being studied right now for Alzheimer’s disease (AD) are [1, 9]:

We may discover more accurate biomarkers in the future. Combining genetic tests and blood tests that measure gene expression (such as proteinomics and miRNA signatures) is the most promising approach [9].

Biomarkers of Alzheimer’s disease include beta-amyloid, tau, and FGG proteins, but they are not reliable and accurate enough at the moment.

Other Forms of Dementia

Although doctors can almost always determine if a person has dementia, it may be difficult to identify the exact cause.

Alzheimer’s disease is the most common cause of dementia, accounting for 80% of cases. Getting a correct diagnosis is key, as it ensures you’ll receive the right treatment. Other forms of dementia are outlined below [1].

Vascular dementia accounts for 5-10% of cases. It is caused by damage to brain cells due to blockage of blood vessels or bleeding in the brain [1].

While memory loss is the hallmark of Alzheimer’s disease, impaired judgment and reduced decision-making ability are more likely to appear first in vascular dementia. There may also be problems with motor function, such as slow gait or poor balance [1].

Lewy body is a form of dementia that is due to clumps of the protein alpha-synuclein inside brain cells. Compared with Alzheimer’s disease, people with Lewy body dementia are more likely to experience sleep disturbance, hallucinations, poor balance, or movement problems. Like vascular dementia, Lewy body dementia accounts for 5-10% of cases [1].

Initially, doctors considered it rare for people to have more than one type of dementia, but recent studies show that over 50% of patients with Alzheimer’s disease are likely to suffer from other forms of dementia as well. The risk of having mixed forms of dementia is highest for people older than 85 years [1].

Alzheimer’s disease is the most common cause of dementia, though other diseases may also be the culprit in up to 20% of the cases.

Conditions That May Resemble Dementia

Science has yet to identify the underlying Alzheimer’s disease-triggering pathway that could be targeted with conventional treatment. Pharmaceutical treatments today only target the symptoms and replenish the levels of neurotransmitters to improve patients’ quality of life.

Acetylcholine is the most important neurotransmitter for attention, learning, and memory. A drop in its activity – due to a loss of neurons or the connections between them – impairs cognitive function [10].

In Alzheimer’s disease, the so-called cholinergic neurons that use acetylcholine get damaged and destroyed. Acetylcholine transporters may also stop working, making it harder for acetylcholine to get to its job in the first place [11, 12].

Drugs that inhibit an enzyme called acetylcholinesterase, which breaks down acetylcholine, increase acetylcholine levels in the brain, compensating for the loss of neurons [11, 12].

Both donepezil and galantamine, described below, are acetylcholinesterase inhibitors.

In a review of 30 studies involving more than 8k patients with AD, donepezil was found to be mildly effective at improving cognitive function and daily functioning [13].

In a trial of 36 patients with AD who had not previously responded to donepezil, galantamine significantly improved their ability to make decisions, and neuropsychiatric symptoms (e.g. apathy, irritability, movement). The reason galantamine worked better may be because of its ability to improve the function of nicotinic receptors in the frontal lobe [16].

Acetylcholinesterase inhibitors like donepezil and galantamine increase acetylcholine brain levels to compensate for the cognitive decline in Alzheimer’s disease.

Glutamate is the main excitatory neurotransmitter in the brain. Where GABA calms the brain, glutamate activates it. Ideally, GABA and glutamate should be in balance. Excess glutamate over-stimulates brain cells until can no longer handle the stimulation – and they die. This is one of the characteristics of Alzheimer’s disease [17].

Memantine is a medication that blocks NMDA receptors, which glutamate acts upon. Memantine protects neurons from the toxic effects of excess glutamate release (excitotoxicity) without disrupting normal neuronal function [18].

Memantine is a drug that counters glutamate toxicity in the brain, which might help brain cells survive longer in people affected with Alzheimer’s disease.

Aducanumab is a human monoclonal antibody that reacts with and clears beta-amyloid proteins. In a trial of 165 patients with AD, intravenous infusions of aducanumab significantly reduced beta-amyloid plaque deposits in patient’s brains. The drug also slowed the patient’s decline in cognitive function. Aducanumab is currently undergoing a phase 3 trial [19].

Other drugs such as verubecestat, semagacestat, solanezumab, and gantenerumab have mainly failed in clinical trials [20, 21, 22, 23].

New drugs like aducanumab are engineered antibodies that might help break down harmful amyloid-beta plaques in the brains of people with Alzheimer’s disease.

In the late stages of the disease, people need to be under constant medical care. Doctors diagnose Alzheimer’s based on overall symptoms, family history, and brain scans. New tests might make early and more accurate diagnosis a reality, based on blood markers and genes.

If you haven’t read through the other parts, head on over to:

The ApoE gene is the most significant known cause of Alzheimer’s disease and mild cognitive impairment. Find out whether your genes predispose you to conditions like these and what you can do about it.