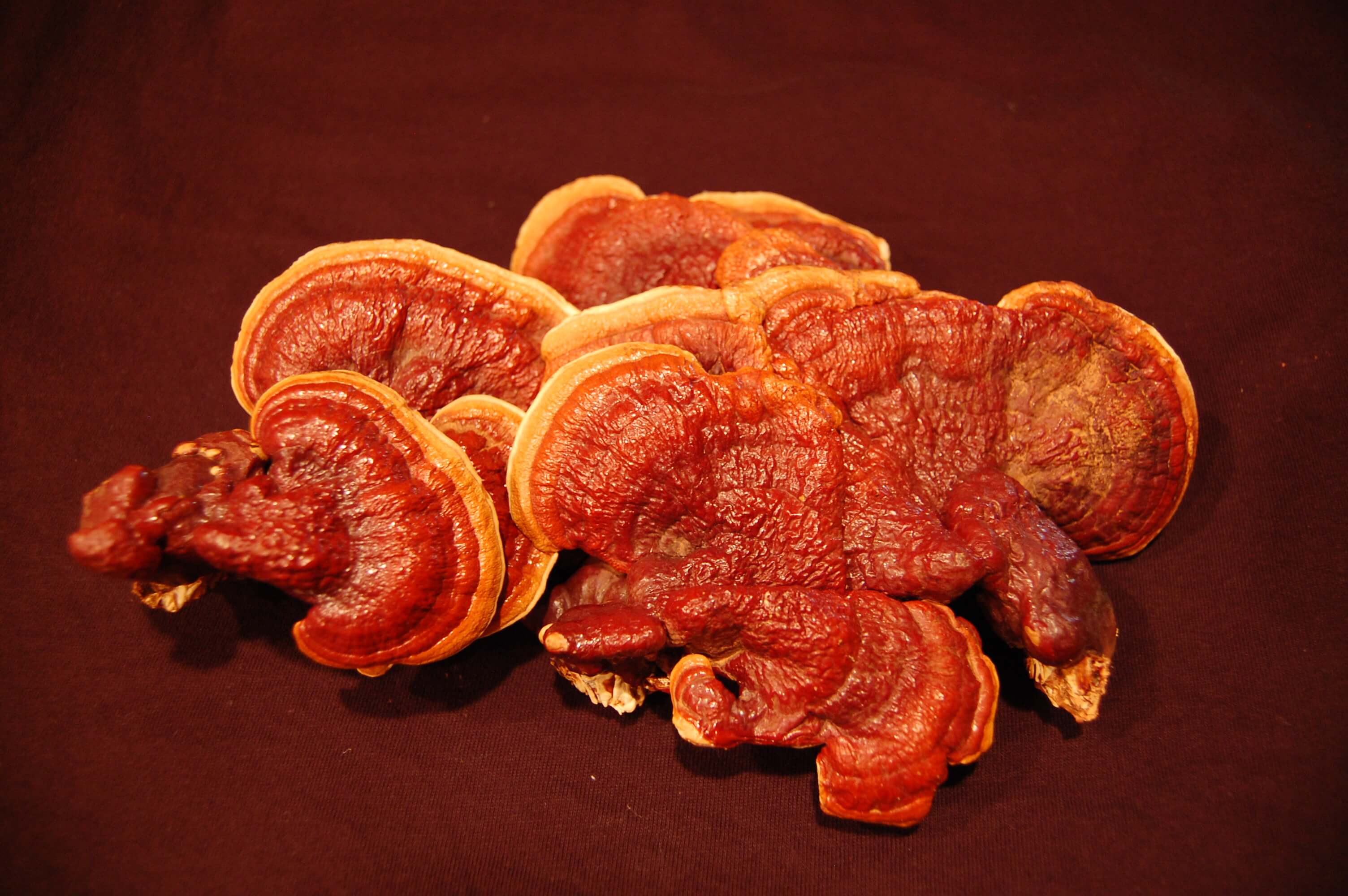 This single mushroom may offer immune support, reduce stress and anxiety, be anti-inflammatory, anti-cancer, and much more. Read more about reishi mushroom to learn why it is traditionally called “The God of Fungi”.

Ganoderma lucidum/“Lingzhi” (soul/spirit) mushroom, commonly known as “Reishi mushroom”, is a potent fungus that has been used for thousands of years in traditional Chinese medicine. Proponents claim it is especially good at modifying the immune system by increasing it when weakened, or lowering it when it is too active [1].

It has 400 different bioactive compounds reported to have a number of potential effects including modification of the immune system, anti-inflammatory, anti-tumor, antibacterial, antiviral, anti-diabetic, and anti-oxidative [1].

The following purported benefits are only supported by limited, low-quality clinical studies and some animal and cell research. Although some results are promising, there is insufficient evidence to support the use of reishi mushroom for any of the below-listed uses. Remember to speak with a doctor before taking reishi supplements and never use them as a replacement for approved medical therapies.

Most people have heard about reishi for balancing immunity. Studies have identified high amounts of compounds that may strengthen the immune cells and improve general immune system health [2].

Two clinical trials on 75 people with advanced-stage cancer showed that both reishi mushroom extract and complex carbohydrates isolated from this fungus increased the counts of several immune cells (CD3+, CD4+, CD8+, and CD56+) and the blood levels of several cytokines (IL-2, IL-6, IFN-gamma), but decreased IL-1 and TNF-alpha [3, 4].

In a clinical trial on 40 male soccer players on a training program to improve endurance performance (‘living high-training low’), reishi mushroom helped correct the reduction in the CD4+/CD8+ ratio caused by the training. The authors suggested this may help the players fight infections [5].

Studies have shown that reishi may reduce inflammation in rheumatism, asthma, and pink eye without notable side effects [6].

The extracts of reishi and other mushrooms showed anti-inflammatory and antioxidant activity in cells. Among them, reishi was the most effective at inhibiting nitric oxide production in response to bacterial carbohydrates (LPS) [10, 1].

Forty-eight breast cancer patients reported reduced anxiety and depression, as well as increased quality of life, when they received reishi spores along with their cancer treatment [11].

In a clinical trial on 132 people with neurasthenia, complex carbohydrates isolated from reishi mushroom improved fatigue and other symptoms and were well tolerated [12].

A commercial herbal formula with reishi mushroom and two herbs used in Chinese medicine (Chinese licorice and Sophora flavescens) improved lung function (although less than prednisone) in a clinical trial on 91 asthmatic people and a study in mice. The complex was well tolerated and caused no adverse effects in another trial on 20 people [13, 14, 15].

Studies revealed that compounds found in reishi effectively inhibit the release of histamine from mast cells, which may explain its benefits for asthma [16, 17, 18].

Below, we will discuss some preliminary research on the anticancer potential of reishi mushroom. Although the results are promising, further clinical trials are needed before establishing if this fungus and its compounds are useful in cancer therapy.

Do not under any circumstances attempt to replace conventional cancer therapies with reishi mushroom or any other supplements. If you want to use it as a supportive measure, talk to your doctor to avoid any unexpected interactions.

In a clinical trial on over 200 people with colorectal cancer, treatment with reishi mushroom extract reduced the number and size of tumors [19].

As previously mentioned, both reishi extract and a complex carbohydrate isolated from this mushroom enhanced immune responses in 2 trials on 75 people with advanced colorectal cancer, possibly helping them fight the disease [3, 4].

Similarly, a complex with citronellol and the extracts of reishi mushroom, dong quai, and dang shen (Codonopsis pilosula) increased immune cells in another trial on 105 cancer patients receiving chemo or radiotherapy [20].

A genistein-rich extract obtained by culturing reishi mushroom with soybean extract didn’t reduce the blood levels of a prostate cancer marker (PSA) by over 50% in 52 men with a history of this disease, but 8 out of the 13 men in the active surveillance group had either no rise or a slight decline of this marker after the treatment. This extract prevented the formation of new blood vessels in colorectal cancer tumors in mice [21, 22].

Treatment with reishi for 13 weeks reduced tumor growth and weight by roughly 50% in mice with breast cancer. Cell studies showed it inhibited the cancer-promoting mTOR pathway [24].

In a cell-based study, the blood collected from patients with lung cancer suppressed the proliferation and activity of immune cells (lymphocytes). Complex carbohydrates isolated from reishi mushroom partly counteracted these effects [25].

Although the results are promising, further clinical trials are needed before establishing if reishi mushroom and its compounds are useful in cancer therapy. Do not under any circumstances attempt to replace conventional cancer therapies with reishi mushroom or any other supplements. If you want to use it as a supportive measure, talk to your doctor to avoid any unexpected interactions.

In a clinical trial on 61 people infected with a virus that causes warts (human papillomavirus), a combination of reishi and Turkey tail mushroom (Trametes versicolor) cleared the infection in 88% of the patients [30].

An herbal formula with reishi mushroom and other extracts decreased herpes zoster pain in 5 people with shingles. The same mixture sped up symptom relief in a small trial on 15 people with cold sores or genital herpes [31, 32].

In two clinical trials on 138 men with urinary tract infections, reishi mushroom extract improved the symptoms and was well tolerated [33, 34].

The mushroom also inhibited the growth of several fungal pathogens and enhanced the antibacterial effects of antibiotics against infectious microbes in test tubes [36, 37].

An active compound isolated from reishi mushroom (beta-D-glucan) reduced the risk of narrowed arteries (atherosclerosis) in 71 people with chest pain by acting as an antioxidant [8].

Reishi extract also reduced damage to the cells that line blood vessels in a small trial on 14 people with kidney damage, thus reducing the risk of heart attacks [38].

In a clinical trial on 26 people with diabetes, reishi helped reduce both blood cholesterol and insulin resistance. However, a similar trial on 84 people found reishi ineffective to reduce cardiovascular risk factors in diabetics [39, 40].

A protein-rich extract of this mushroom lowered blood pressure, with the effects lasting up to 8 hours, in hypertensive rats [41].

In a small trial on 14 people with proteinuria, a sign of kidney disease, reishi resolved this condition and restored the balance of their immune system [38].

In a clinical trial on 42 healthy people, reishi extracts enriched in triterpenoids and carbohydrates reduced oxidative damage to the liver and even reversed mild fatty liver condition [7].

In a clinical trial on 32 people with rheumatoid arthritis, a supplement with reishi mushroom and an herbal mix used in traditional Chinese medicine (San Miao San) was well tolerated and slightly reduced pain. However, no antioxidant or anti-inflammatory effects could be proven [43].

Reishi improved brain function of alcohol-consuming rats, both by increasing the energy supply to the brain and decreasing the levels of inhibitory neurotransmitters [42].

However, spore powder of reishi mushroom was ineffective at improving any symptoms in a pilot study on 42 people with Alzheimer’s disease [45].

Similarly, a commercial supplement with reishi and another mushroom used in traditional Chinese medicine (Cordyceps sinensis, or caterpillar mushroom) had no cognitive enhancement effects after 30 days in a clinical trial on 96 healthy people [46].

Taken together, the evidence suggests that reishi mushroom is ineffective at improving brain function, both in healthy people and those with Alzheimer’s.

Keep in mind that the safety profile of reishi mushroom is relatively unknown, given the scarcity of well-designed clinical studies. You should consult your doctor about any potential side effects, based on your health condition and possible drug or supplement interactions.

Most studies suggest none or no noticeable side effects noted by biological markers or subjective experiences [11, 47].

One toxicity study showed no evidence for liver, kidney or DNA toxicity with reishi intake [48].

Due to its effects on the immune system, it may make some autoimmune or inflammatory conditions worse by activating/increasing the already overactive immune system.

Because reishi mushroom is not approved for any conditions, there is no official dose. Users and supplement manufacturers have established unofficial doses based on trial and error. They normally recommend taking 1-2 caps per day of the extract.

5+ Health Benefits of Rosemary + Side Effects