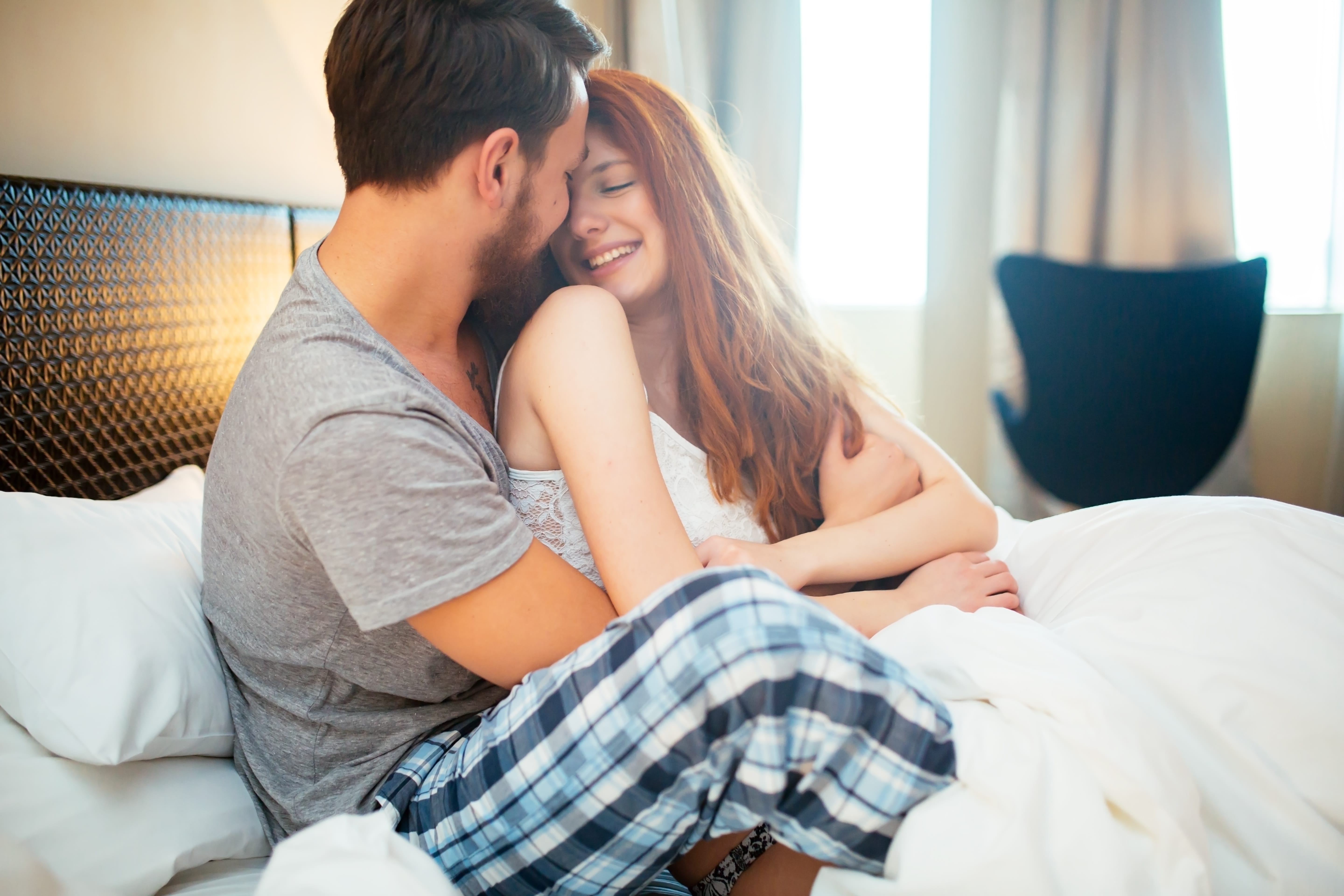 Some call it the “love hormone”: oxytocin helps us form social bonds and improves our mood. How does it work, and what factors increase or decrease it? Find out here.

In this section, we’ll discuss the normal functions of oxytocin, and some of the potential benefits of intranasal oxytocin. Note, however, that intranasal oxytocin has only been approved for specific medical purposes (such as treatment-resistant depression and stimulating labor during pregnancy), and it should only be administered with a doctor’s approval [1, 2].

If you believe that you might benefit from oxytocin, discuss this option with your doctor. In general, we strongly recommend against using oxytocin on your own — especially if you are pregnant.

Giving oxytocin to people increases trust and generosity and reduces their fear of social betrayal [3].

Disclosure of emotional events is a sign of trust in humans. When recounting a negative event, humans who receive oxytocin (nasal) share more emotional details and stories with more emotional significance.

Oxytocin supplementation increased empathy in healthy men. Even after experiencing social alienation, people who received intranasal oxytocin were still more trusting of others [5].

In mice, oxytocin inhibited fear responses by inhibiting activation of the amygdala [6].

Some researchers have argued oxytocin has a general enhancing effect on all social emotions; intranasal oxytocin has also increased envy and “Schadenfreude” (joy at the pain of others) in human trials [7].

Oxytocin is a major sex hormone. It plays an especially prominent role in female sexual function, but it mediates romantic bonding in both men and women. Furthermore, measurable drops in blood oxytocin are associated with sexual dysfunction in women taking antidepressant medication [10, 11].

However, researchers have yet to identify a way to use oxytocin to reliably improve sexual dysfunction. In one study, intranasal oxytocin appeared to improve markers of sexual function in thirty perimenopausal women; however, the placebo also improved the same markers, meaning that the improvement could not be attributed to the oxytocin treatment [12].

Oxytocin evokes feelings of contentment and trust and reductions in social anxiety [14].

Under certain circumstances, oxytocin appears to indirectly inhibit the release of stress hormones such as cortisol. However, no studies have yet identified a way to use oxytocin to reliably reduce anxiety or improve symptoms of depression. Many studies have attempted the feat, but their findings have been inconclusive [15, 16].

Some researchers believe that oxytocin prevents neuroinflammation and therefore protects neurons in the developing brain. Oxytocin has been found to prevent severe damage in animal models of stroke, and recent evidence suggests a role for protecting the fetal and infant brain during gestation, birth trauma, and early growth [17].

The role of oxytocin in inflammation beyond the brain or in the adult body is unclear.

Oxytocin neurons in the hypothalamus may help suppress appetite under normal conditions, and other hypothalamic neurons may trigger eating via inhibition of these oxytocin neurons [18, 19].

This population of oxytocin neurons is absent in Prader-Willi syndrome, a genetic disorder that causes intellectual disability, impaired growth, uncontrollable eating, and obesity [18].

Due to its similarity to vasopressin, it can reduce the excretion of urine and sodium slightly [20].

No firm or conclusive clinical evidence supports the use of oxytocin for any of the conditions listed in this section. Below is a summary of the existing animal and cell-based research, which should guide further investigational efforts. As such, the studies listed below should not be interpreted as supportive of any health benefit.

Oxytocin is currently under investigation for its potential to inhibit the development of tolerance to various addictive drugs (opiates, cocaine, alcohol) and reduce withdrawal symptoms. Oxytocin administration has reduced addictive behavior in animal studies, but not in human trials so far [21].

Conditions With a Dysfunctional Oxytocin System

Oxytocin may strengthen existing social bonds (for example, between relatives/friends), but it does not help create new bonds between strangers, implying that it is less of a “love”, “empathy” or “moral” molecule and maybe more of an “us-versus-them” molecule [27].

Oxytocin promotes ethnocentric behavior, incorporating the trust and empathy of in-groups with their suspicion and rejection of outsiders. It promoted dishonesty when the outcome of lying benefited the group to which an individual belonged (the in-group) [29].

When given oxytocin, individuals alter their subjective preferences in order to align with in-group ideas over out-group ideals [30].

The in-group bias is evident in smaller groups; however, it can also be extended to groups as large as one’s entire country leading toward a tendency of strong national zeal. A study done in the Netherlands showed that oxytocin increased in-group favoritism of their nation while decreasing acceptance of members of other ethnicities and foreigners [31].

It has thus been hypothesized that this hormone may be a factor in “xenophobic” tendencies. Furthermore, oxytocin was correlated with participant desire to protect vulnerable in-group members [32].

Many factors have been found to increase oxytocin release or to activate oxytocin receptors, but these broadly lack enough clinical research to be considered effective for this purpose. Before making significant changes to your diet, exercise, or supplement regime, be sure to talk to your doctor to avoid adverse effects or unexpected interactions.

Broadly speaking, sexual behavior triggers the release of oxytocin. More specifically, oxytocin is released during or after the following behaviors or events [10]:

The following lifestyle practices and events have been found to promote oxytocin release in at least one human study.

Fenugreek is believed to be a “galactagogue” (stimulator of milk production) in Middle Eastern and South Asian systems of traditional medicine. Human trials are still lacking, however [48].

According to limited human trials, certain types of aromatherapy could potentially increase oxytocin release in the brain, thereby increasing trust and relaxation.

Certain supplements and probiotics could potentially increase oxytocin release, but these are generally lacking in clinical research, and none have been approved by the FDA for this purpose. Talk to your doctor before using any new supplement.

Magnesium is required for oxytocin to function. Magnesium deficiency may impair oxytocin signalling, but no clinical trials have determined whether magnesium supplementation increases oxytocin release [51, 52].

Vitamin D has binding sites in the genes that produces the oxytocin receptor and an oxytocin precursor. Some researchers have suggested that vitamin D deficiency may increase a fetus’s odds of developing autism due to a lack of oxytocin [53].

L Reuteri probiotics increased oxytocin release in experimental rats, but human studies have not yet investigated this effect [54].

Likewise, caffeine increased brain oxytocin in mice, but this result has not been investigated in human studies [55].

Other hormones interact with the oxytocin signalling system, but there is no particular evidence that taking or increasing these hormones imparts a benefit to oxytocin. We strongly advise against taking hormones without a doctor’s prescription.

Certain drugs have been found to increase oxytocin, but with significant adverse effects. We strongly advise against taking any illicit drugs for any reason.

One of the many reasons that bisphenol A (BPA) is considered dangerous is that it may decrease oxytocin across generations. In a mouse study, mothers with BPA levels similar to the average human produced offspring with impaired oxytocin and vasopressin signalling, an effect which persisted to the fourth generation of experimental animals [61].