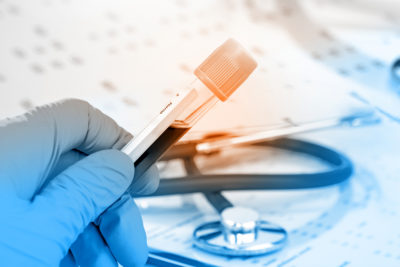 Thyroglobulin is a protein used to make thyroid hormones. Doctors mainly check its levels to determine if thyroid cancer has returned after surgery and radiation. Thyroglobulin antibodies may point to autoimmune thyroid diseases such as Hashimoto’s and Graves’ disease. Learn more about thyroglobulin, blood test normal range, and the causes of high/low levels.

Thyroglobulin is a large protein used by the thyroid gland to make thyroid hormones (T4 and T3) and store iodine in the body [1].

Thyroglobulin is made in the thyroid by the so-called follicular cells. When the thyroid is stimulated by thyroid-stimulating hormone (TSH), it combines iodine with thyroglobulin to create the hormones T4 and T3 (the “4” and “3” refer to the number of iodine atoms attached) [2].

While most thyroglobulin stays in the thyroid, a small amount leaks out into the bloodstream. Levels in the blood are directly proportional to the size of the thyroid. For example, thyroid cancer cells enlarge the gland and make thyroglobulin in high amounts.

In fact, any disorder that increases the size of the thyroid (cancer, autoimmune disease, nodules, etc.) can raise thyroglobulin levels [2].

Thyroglobulin Test – When is it Ordered?

Doctors usually order the thyroglobulin test after thyroid cancer surgery, most often in combination with an ultrasound of the neck. It helps determine if cancer has returned.

Detectable thyroglobulin levels that continue to rise a year after surgery suggest that cancer has come back. A neck ultrasound helps in confirming this [3, 2].

If levels are undetectable within a year after surgery, the risk of cancer returning is low. If you had thyroid cancer, however, your levels will be monitored yearly for life to ensure you’re still cancer-free [2].

Thyroglobulin antibodies (TgAb) can interfere with the measurement of thyroglobulin and cause falsely low or undetectable levels. This is why a TgAb test is always ordered at the same time as a thyroglobulin test [4].

The normal range for thyroglobulin is:

In countries where iodine deficiency is common (not the US), the reference range may be higher [5, 6, 7].

Women tend to have slightly higher thyroglobulin levels than men [8].

Pregnant women will typically have high thyroglobulin levels during the third trimester [9].

You shouldn’t take biotin (vitamin B7) for 12 hours before giving a blood sample as it may interfere with the results [10].

Antibodies to thyroglobulin (TgAb) are commonly found in people with autoimmune hypothyroidism (Hashimoto’s thyroiditis and atrophic thyroiditis) and hyperthyroidism (Graves’ disease). More than 50% of people with these diseases test positive for TgAb [11, 12].

However, 2-5% of people with normal thyroid function may also have thyroglobulin antibodies, which tend to increase with age. Women are twice as likely as men to test positive for TgAb [11, 12, 13].

Antibodies to thyroglobulin are also found in other autoimmune diseases including rheumatoid arthritis (12-23% of patients), type 1 diabetes (30%), and Celiac disease (11-32%) [11].

Thyroglobulin antibodies mistakenly tag thyroglobulin as a harmful substance, which causes the body to mount an autoimmune response against it [14].

Thyroglobulin levels are a marker of thyroid health. Low or high levels don’t necessarily indicate a problem if there are no symptoms or if your doctor tells you not to worry about it.

Differentiated thyroid cancer (DTC) is cancer of the follicular cells of the thyroid. It is the most common cancer of hormone-releasing glands (endocrine) and accounts for 85-95% of all thyroid cancers. DTC produces thyroglobulin, causing its levels in the blood to rise substantially [15, 16].

DTC is treated by surgically removing the thyroid. After surgery, most people are given radioactive iodine to destroy any leftover thyroid tissue [16].

Thyroglobulin is very useful after surgery to determine if cancer has returned or spread to other parts of the body. However, it is not a good marker for diagnosing DTC, as several other diseases cause high levels. It is also not useful in DTC patients who had normal levels before surgery or in those who still have leftover thyroid tissue after surgery [2, 17, 18].

It is measured 9-12 months after surgery. If the levels are undetectable and an ultrasound of the neck is negative, the patient is cancer-free and has a low risk of the cancer returning [16, 17, 3].

If the levels are detectable, then levels will be monitored every 3-6 months to catch trends. If it’s decreasing, cancer has probably not returned, while an increasing trend suggests cancer has returned or spread [17, 3].

About 20-30% of people with DTC test positive for thyroglobulin antibodies. In these cases, thyroglobulin is not useful in determining if cancer has returned or spread. Instead, doctors will need to rely on other imaging techniques such as a PET or CT scan [3].

However, it is not used to monitor the return of cancer in PDTC patients as its effectiveness has not been confirmed. Initial studies do suggest that detectable thyroglobulin levels after the treatment for this type of cancer increase the risk of cancer returning and death within five years [19, 20].

Most benign (non-cancerous) thyroid tumors are capable of producing thyroglobulin. Thyroglobulin levels are usually slightly above normal levels in these cases [21].

Nodules are solid areas of tissue or fluid under the skin. They can be caused by either a low or high thyroid, but are also at times found in people with normal thyroid function. Most nodules are benign but a small percentage may be cancerous [22].

Most people with an underactive thyroid have high TSH levels, which increase the production of thyroglobulin. In a study of 18 people with hypothyroidism, 12 had extremely elevated thyroglobulin levels [24, 25].

A deficiency in iodine causes the body to release more TSH. In turn, the thyroid produces more thyroglobulin [27].

Cirrhosis is scarring of the liver caused by alcohol, hepatitis, or non-alcoholic fatty liver disease. In a study of 134 people, those with cirrhosis had 84% higher thyroglobulin levels than healthy controls [29].

Acromegaly is a disorder caused by the overproduction of the growth hormone from the pituitary gland. People with acromegaly have enlarged thyroids that produce higher levels of thyroglobulin [30].

Improving your thyroglobulin levels won’t necessarily cause improvement in thyroid function, but it can be used as a biomarker for your thyroid health.

The following is a list of complementary approaches to support the thyroid that may also balance high Tg levels. Though studies suggest various dietary and lifestyle factors may lower Tg levels, additional large-scale studies are needed.

Remember to talk to your doctor before making any major changes to your day-to-day routine.

In a study of over 400 people, 47% of smokers had high thyroglobulin levels compared to only 18% of non-smokers. This increase was linked to a greater risk of thyroid gland swelling (goiters). A compound in tobacco smoke called thiocyanate prevents the thyroid gland from using iodine properly, which triggers its enlargement [34, 35].

Iodine supplements will help lower your thyroglobulin levels only if you’re iodine-deficient. The iodine dosage will vary depending on the severity of the deficiency.

A study of 100 people with mild iodine deficiency found that taking 80 μg/day of iodine reduced thyroglobulin levels by 24% [37].

However, keep in mind that iodine supplementation may be ineffective, or even dangerous, if your iodine levels are normal.

In a study of 18 people with hypothyroidism, 20 – 60 mg/day of selenium decreased thyroglobulin levels [40].

Vitamin A will help lower your thyroglobulin levels only if you’re vitamin A-deficient.

Thyroglobulin levels are a marker of thyroid health. Low or high levels don’t necessarily indicate a problem if there are no symptoms or if your doctor tells you not to worry about it.

1) Too Much Synthetic T4 hormones

Thyrotoxicosis factitia (TF) is a condition caused by taking too much synthetic T4 hormones (levothyroxine). It mimics an extremely overactive thyroid. Thyroglobulin levels are very low or undetectable in people with this condition [43].

Thyroglobulin can help doctors determine if an overactive thyroid is due to TF or other causes [44].

Make sure to use levothyroxine only if your doctor prescribed it, and strictly follow their dosage instructions.

Improving your thyroglobulin levels won’t necessarily cause improvement in thyroid function, but it can be used as a biomarker for your thyroid health.

The following is a list of complementary approaches to support the thyroid that may also balance low Tg levels. Though studies suggest various dietary and lifestyle factors may increase Tg levels, additional large-scale studies are needed.

Remember to talk to your doctor before making any major changes to your day-to-day routine.

Cold exposure activates brown adipose tissue (BAT), a type of fat tissue that generates heat and keeps you warm. Thyroid hormones are required to activate brown fat tissue. Essentially, cold temperatures increase the activity of the thyroid gland to keep the body warm, which makes more thyroglobulin as a result [49].

A study of 535 people living in Greenland found that hunters exposed to cold weather on a daily basis had 46% higher thyroglobulin levels than city-dwellers [49].

In a study of 12 people living in Antarctica, thyroglobulin levels increased by 24% after seven months (due to a 43% increase in TSH levels) [50].

However, this has only been found in animal research and clinical trials are needed to come to any conclusions.

There are at least 52 mutations in the thyroglobulin gene that correlate with low thyroglobulin levels or irregularly-shaped thyroglobulin. Many of the mutations result in inherited (congenital) hypothyroidism, which causes an underactive thyroid in newborns [52, 53].

SNPs in the thyroglobulin gene that may be associated with Graves’ disease include [54]:

SNPs in the thyroglobulin gene that may be associated with Hashimoto’s disease include [55, 56, 54]:

Thyroglobulin is important to monitor if you had thyroid cancer and underwent surgery in the past. The test will help your doctor determine if cancer has a high or low chance of coming back, lower levels indicating a better outcome.

This marker increases proportionally to the size of the thyroid gland, which means that benign tumors, nodules, an underactive thyroid, and Grave’s disease can also raise its blood levels.

Some complementary approaches that may support the thyroid, as measured by lower thyroglobulin, include quitting smoking, selenium supplements, and iodine for deficient people. On the other hand, cold exposure may support the underactive thyroid and increase Tg levels.

Speak to your doctor before applying any of these approaches.

Neuroscience
4.6
34
31 Natural Factors that May Increase Myelin
Neuroscience
0
Brainstem, Tuberomammillary Nucleus & Locus Coeruleus
Neuroscience
4.7
3
All About GSK3B: What It Does, How To Inhibit It, And More