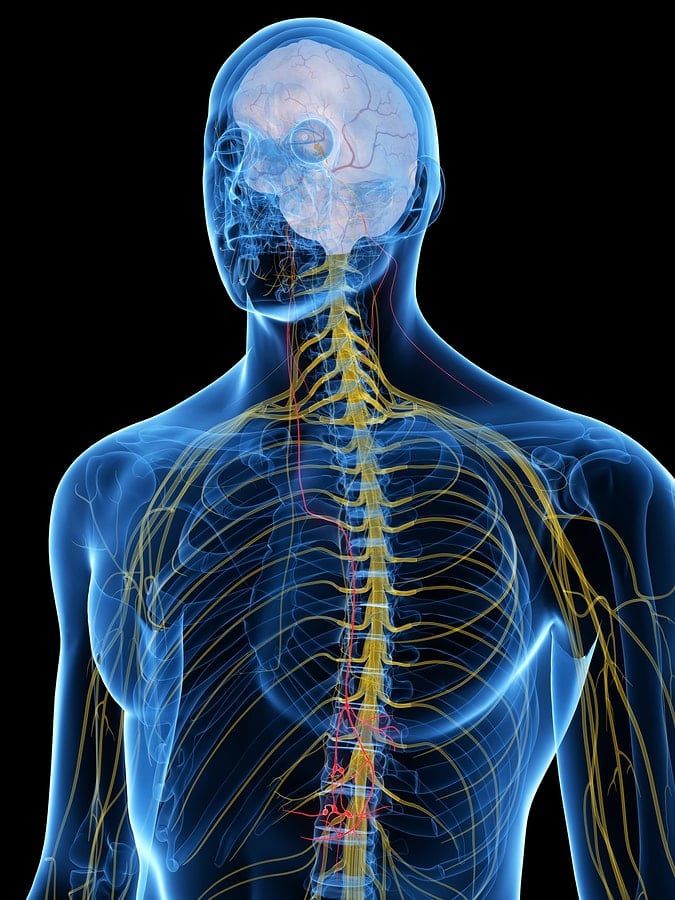 The vagus nerve plays many roles in the body. Scientists think that it drives gut-brain axis communication. Recent research has linked several disorders with vagus nerve problems. In this post, we will review how this “wandering” nerve works and how its activity can affect health.

What is the Vagus Nerve?

According to a new scientific paradigm, vagal nerve dysfunction may be at play in people with fatigue, food sensitivities, anxiety, gut problems, “brain fog,” and depersonalization [1, 2, 3].

Researchers suggest that these people may have lower vagal tone–meaning the nerve has a lower ability to perform its functions. Some scientists hypothesize that vagus nerve activity can predict chronic diseases and unhealthy lifestyle choices in general [3].

Although intriguing, we are still lacking solid research that would back up these hypotheses.

One question scientists face is which aspect of the vagus nerve is malfunctioning and to what extent it is the problem vs. other aspects of a person’s biology.

Additionally, the majority of studies covered in this article deal with associations only, which means that a cause-and-effect relationship hasn’t been established.

For example, just because anxiety has been linked with low vagal tone doesn’t mean that and anxiety is caused by low vagal tone. Data are lacking to make such claims.

Also, even if a study did find that low vagus nerve activity contributes to anxiety, vagal tone is highly unlikely to be the only causative factor. Complex disorders like anxiety always involve multiple possible factors–including brain chemistry, environment, health status, and genetics–that may vary from one person to another.

That said, let’s take a look at exactly what the vagus nerve does in the body.

The vagus nerve is part of the parasympathetic nervous system, referred to as the rest-and-digest system. It’s not the only nerve in the parasympathetic system, but it’s the longest one. Scientists also sometimes view it as the most important one because it has such far-reaching effects [4].

The word vagus means “wanderer,” because this nerve wanders all over the body to reach various important organs.

Given its importance for gut health, vagus nerve sluggishness or damage has been implicated in digestive disorders including dyspepsia, gastroparesis, GERD, ulcerative colitis, anorexia, and bulimia, to name a few [4].

The vagus nerve is important for the rest-and-digest system.Various health problems, including indigestion and anorexia, have been linked with its blunted activity.

In general, nerves (including the vagus) can be damaged or their activity altered via 3 main pathways [5, 4]:

How It Affects Your Body

In the brain, the vagus nerve helps control mood. Limited studies suggest that its imbalance is implicated in anxiety and depression [2].

The vagus nerve thought to be largely responsible for the mind-body connection since it goes to all the major organs (except the adrenal and thyroid glands) [6].

Some researchers hypothesize that this nerve might be intimately tied to how we connect with one another–it links directly to nerves that tune our ears to human speech, coordinate eye contact, and regulate emotional expressions. It also influences the release of oxytocin, a hormone that is important in social bonding [7].

One study suggested that higher vagal tone is associated with greater closeness to others and more altruistic behavior [8].

Vagus activity of a child may be affected by their mother. Infants of mothers who were depressed, angry, or anxious during pregnancy had lower vagus activity in one study [9].

Some studies suggested that the vagus nerve is important for getting in the mental state of “flow.” It’s believed that the combination of sympathetic (fight-or-flight) and vagus activation creates the right environment for a flow state [7].

Vagus nerve stimulation might increase wakefulness (by increasing orexin in the prefrontal cortex). It has been shown to decrease the amount of daytime sleep and rapid eye movement in epilepsy patients with traumatic brain injury. In comatose rats, it seemed to promote the recovery of consciousness after traumatic brain injury [10].

However, over-activating the vagus nerve has been linked with “sickness behavior” (fatigue, sleepiness, depression, anxiety, appetite loss, pain, lowered motivation, and failure to concentrate) in animals when activated by inflammatory markers in an inflammatory state (IL-1b) [11].

In the gut, it increases stomach acidity, digestive juice secretion, and gut flow. Since the vagus nerve is important for increasing gut flow (motility), having less vagus activation has been linked with IBS risk and slower flow. Large human studies are needed to confirm these findings [12].

Scientists are investigating whether stimulating the vagus nerve can increase the release of histamine by stomach cells, which helps release stomach acid. Stomach acid releases the intrinsic factor, which helps absorb vitamin B12 [13].

Thus, scientists hypothesize that low stomach acidity may be, in part, a vagus nerve problem. They believe that satiety and relaxation following a meal may be partially caused by activation of the vagus nerve’s transmission to the brain in response to food intake [14].

In the liver and pancreas, it helps control blood glucose balance [16].

In the gallbladder, it may help release bile, which helps break down fat and absorb fat-soluble vitamins [17].

In the heart, it controls heart rate and blood pressure. A promising, small study on heart failure patients suggested that vagal nerve stimulation in addition to conventional therapy may improve symptoms. Larger trials are needed [18].

Some research suggests that the vagus nerve promotes general kidney function. It helps with glucose control and increases blood flow, which improves blood filtration. Vagus activation likely also releases dopamine in the kidneys, which helps excrete sodium and, thereby, lower blood pressure. This mechanism is not fully clear in humans, though, and more studies are needed [19, 20].

The vagus nerve also goes to the bladder. A potential side effect of its stimulation is urinary retention. On the other hand, less vagus stimulation may make people urinate more frequently [21, 22].

Certain practitioners hypothesize that their patients who complain about frequent urination may have a vagus nerve issue, in combination with other factors such as low vasopressin, low aldosterone, and high cortisol). Although this is possible, clinical studies about these connections are lacking.

In the spleen, it can reduce inflammation. Note that vagus activation may theoretically affects various organs (by releasing acetylcholine), but when it activates in the spleen the response is thought to be more systemic [23].

It may affect fertility and orgasms in women by connecting to the cervix, uterus, and vagina. However, the effects of the vagus nerve on women’s health are still largely unknown, and most of what we know comes from animal studies [24, 25].

In the tongue, it helps control taste and saliva; while in the eyes, it helps release tears. It also innervates the ear. Scientists are studying if types of ear stimulation can also activate the vagus nerve while also affecting tinnitus [26, 27].

The vagus nerve may stimulate the spleen, reproductive organs, and glands in the ears and mouth.

Symptoms and disorders shown here have been associated with vagus nerve dysfunction in limited studies. A cause-and-effect relationship hasn’t been established in most cases. Work with your doctor or other health care professional for an accurate diagnosis.

Conditions that May Improve From Vagus Activation

An implantable vagus nerve stimulator is indicated and FDA-approved only in people with seizures and treatment-resistant depression [35, 36].

Ongoing research is investigating whether various types of vagal stimulation — ranging from implantable devices to manual stimulation or relaxation-induced activity — may be used in [36]:

However, vagus nerve stimulation has not been approved by the FDA for any of the health problems listed above. Large-scale clinical data are still lacking.

On the other hand, low-frequency HRV is associated with both sympathetic (fight or flight) and parasympathetic (rest and digest) activation.

More human research is needed to verify and better understand these connections and how the “wandering” vagus nerve impacts overall health.

What Is Dopamine & Is It Bad In Excess?