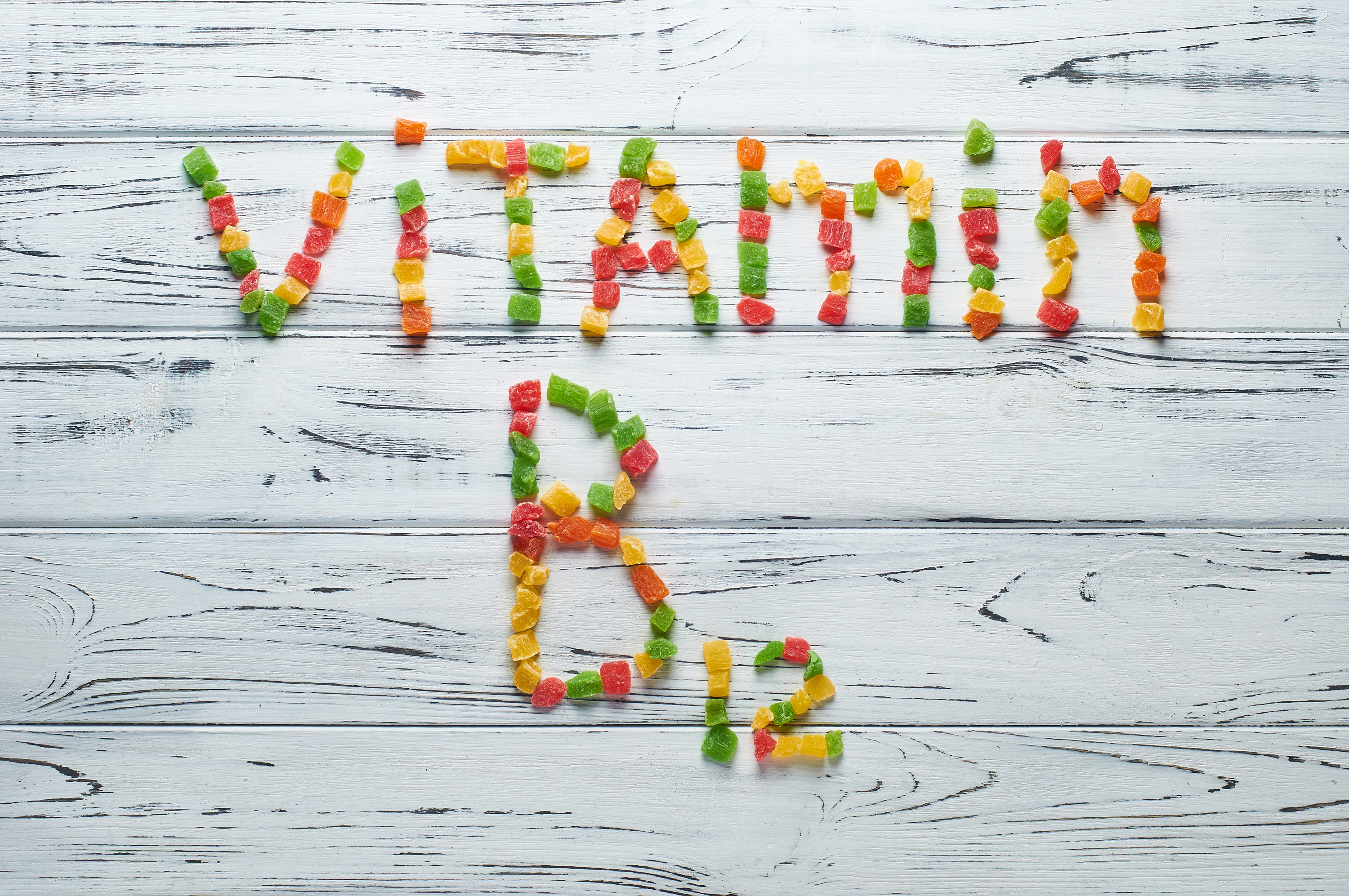 Vitamin B12 is part of the Vitamin B complex, sometimes referred to as a “painkilling vitamin”. It helps DNA production, cardiovascular support, and energy metabolism. In this post, learn more about vitamin B12, its functions, benefits, causes of deficiency, and food sources.

Vitamin B12 is a very important marker to monitor, especially if you haven’t been leading the best lifestyle or you have known chronic health issues.

What is Vitamin B12?

Vitamin B12, also referred to as cobalamin, is a water-soluble vitamin [1].

It contributes to the successful synthesis of DNA, the normal functioning of the nervous system, and the production of energy [2].

The liver is the main site of storage of vitamin B12 in the human body [3]. Humans can obtain vitamin B from dietary sources, fortified foods, and supplements [4, 5, 6].

It can take the form of cyano-, hydroxyl, methyl, and deoxy adenosyl-cobalamin [7].

Cyanocobalamin, the most stable and unnatural form of vitamin B12, is most commonly used in supplements and does not have a direct cofactor role in cellular metabolism.

The most biologically significant forms of vitamin B12 are methylcobalamin and coenzyme B12 (5’-deoxy-5’-adenosylcobalamin) [8, 9].

Vitamin B12 was considered the “Painkilling Vitamin” in some countries as far back as the 1950s [10].

In the vitamin B12 blood test, the normal range for vitamin B12 is between 200 and 900 nanograms per milliliter (ng/mL).

Oral or intramuscular vitamin B12 supplementation can prevent and treat vitamin B12 deficiency of different origins. High oral doses (647-1032 mcg daily) can be equally effective as an intramuscular treatment, even in cases of pernicious anemia or malabsorption disorders [13, 14].

However, more severe cases with the symptoms of nerve damage may require prompt intramuscular treatment [15, 16].

Hydroxocobalamin (Cyanokit, up to 10 g intravenously) intravenously is likely effective for cyanide poisoning due to inhalation, ingestion, or skin exposure. This treatment has been approved by the FDA, including cyanide toxicity treatment in pregnancy [17, 18, 19, 20].

Vitamin B12 deficiency causes excess homocysteine (hyperhomocysteinemia), which is a proven risk factor for cardiovascular disease [21].

Supplementation with vitamin B12, alone or in combination with folate and vitamin B6, can successfully reduce homocysteine levels [22, 23, 24].

Injected methylcobalamin, a form of Vitamin B12, reduces the clinical symptoms in legs such as paresthesia (an abnormal sensation like tingling or pricking), burning pains, and spontaneous pain in some patients with diabetic neuropathy [28].

A meta-analysis of 7 clinical trials confirmed its moderate benefits for some symptoms of diabetic neuropathy, including pain [29].

In one study, methylcobalamin significantly improved symptoms, such as pain and prickling sensation, in patients with neck pain [30].

It appears to be safe and effective for nerve pain due to herpes simplex infection (postherpetic neuralgia), according to two clinical trials of 178 patients [31, 32].

Higher homocysteine and decreased B12 levels have been associated with an increased risk of age-related macular degeneration (AMD) [38].

Further clinical studies should investigate the effects of vitamin 12 alone on AMD.

A review of 11 studies found that prolonged supplementation with folate and B12 (several weeks to years) may decrease the risk of depression relapse in the long run. Short-term effects were insignificant [41].

Topical cobalamin improved the symptoms of atopic dermatitis – such as skin rash, redness, and itching – in two clinical trials of 70 patients. It was effective and well-tolerated in both adults and children [42, 43].

Larger clinical trials are needed to confirm the benefits of topical vitamin B12 for atopic dermatitis.

No valid clinical evidence supports the use of vitamin B12 for any of the conditions in this section. Below is a summary of up-to-date animal studies, cell-based research, or low-quality clinical trials which should spark further investigation. However, you shouldn’t interpret them as supportive of any health benefit.

Cobalamin may have a role in the prevention of disorders of brain development and mood disorders as well as Alzheimer’s and vascular dementia in the elderly [44].

A meta-analysis of 68 trials found that Alzheimer’s disease patients have significantly lower B12 levels. Additionally, they identified elevated homocysteine as a risk factor for Alzheimer’s [45].

According to one study, taking vitamins B12, B6, and folic acid for two years may slow down brain atrophy in areas associated with cognitive decline and Alzheimer’s disease in some patients [46].

In a trial of 126 patients, the majority of cases with a primary circadian rhythm sleep disorder (CRSD) responded well to B12 supplementation and bright light therapy. However, patients with a secondary CRSD (due to another health condition) didn’t respond as well [47].

The response was variable in another study of 106 patients with different types of CRSD, but most groups experienced mild-to-moderate improvements [48].

On the other hand, methylcobalamin (3 g/day) had no beneficial effects on 50 patients with delayed sleep phase syndrome (DSPS) [49].

Further trials are needed to clarify the conflicting effects of B12 supplementation on sleep disorders.

According to the available clinical evidence, vitamin B12 supplementation may not help with:

When it comes to nutritional yeast, only fortified products contain vitamin B12. Despite some misleading claims of supplement manufacturers, yeasts don’t naturally contain the form of vitamin B12 our bodies can use.

The long-term consequences of less severe B12 deficiency are not fully known but may include adverse effects on nerves, heart health, mental health and cognition, and more [63].

B12 deficiency may be associated with infertility and miscarriage in some women [64].

However, the effects of vitamin B12 supplementation on heart health and stroke risk aren’t clear and require further investigation.

A blood disorder that results from vitamin B12 deficiency (malabsorption) is called pernicious anemia [68].

Low levels of B12 have been linked to depression, Alzheimer’s disease, and other types of cognitive and mental impairment [69, 41].

Multiple studies show that B12 deficiency in the elderly can increase the risk of weakness, frailty, and disability, and increase hospital stay [70, 71, 63, 72].

With regard to bone health, some studies show that B12 deficiency is associated with lower bone mass [63, 73].

Although rarely, vitamin B12 deficiency can cause blurred vision or eye pain. This can occur when an untreated B12 deficiency results in damage to the optic nerve [74].

Pregnant women require higher levels of B12 to prevent birth defects (over 300 mg/dL [77]).

Infants born to B12 deficient mothers or receiving deficient amounts of animal-sourced foods are susceptible to deficiency between the ages of 6 – 12 months [78].

Drugs That Increase the Risk of Deficiency

Some patients with type 2 diabetes who are prescribed metformin may be at risk for cobalamin deficiency [79].

Proton pump inhibitors or Histamine 2 receptor blockers (Zantac, Tagamet) may lead to B12 deficiency, as a result of poorer absorption [80, 81].

Genes, notably TCN2, related to B12 deficiency are associated with autoimmune gastritis [83].

8 Benefits of Aloe Vera + Side Effects