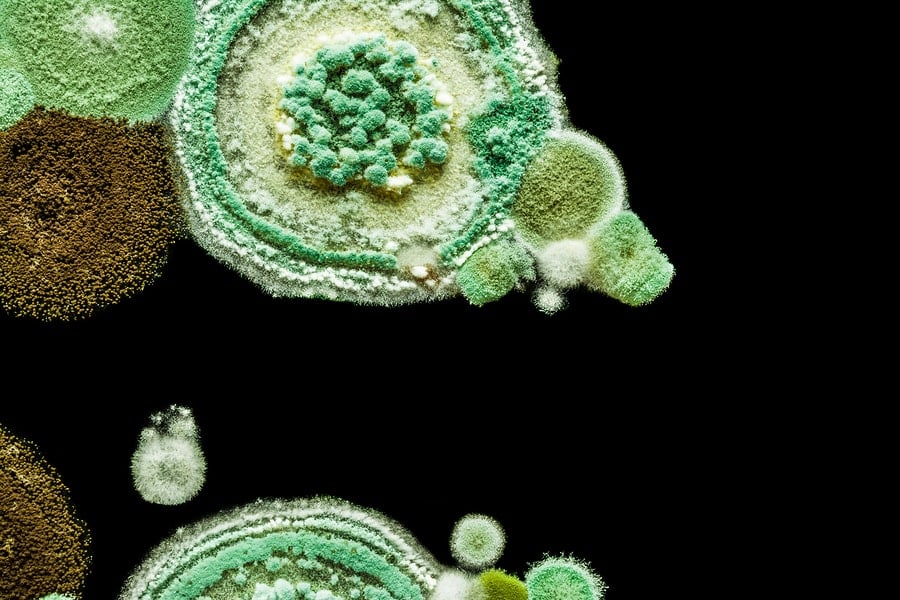 Mold exposure has been linked to headaches, allergies, irritation, and all kinds of other health problems. Learn more about the negative effects of mold here.

Molds are fungi. They can grow inside houses or other buildings, and some researchers and doctors believe that exposure to mold can cause health problems. The harmful effects of mold can be caused by exposure to mold directly, mold odor, mold byproducts, or dampness.

Headaches, fatigue, allergies or other unexplained symptoms are sometimes associated with the amount of time spent in a specific building or room. Some call this “Sick Building Syndrome,” and some researchers have attributed it to mold exposure [1, 2].

Breathing mold or mold-derived byproducts into your lungs can be harmful in a variety of ways.

A meta-analysis showed that building dampness and mold increase the incidence of respiratory infections and asthma by 30 – 50% [3].

A similar study on residential home dampness and mold showed an 8 – 20% increase in the incidence of respiratory infections and bronchitis [4].

In children, exposure to indoor mold was associated with up to 50% more coughing. Moreover, stronger effects were seen for asthma in more crowded households [5].

A study on infants showed lung iron overload and lung bleeding disorders were significantly more abundant if they lived in homes with higher levels of fungi in the air and surfaces [6].

In buildings with water damage, respiratory illness was significantly associated with the presence of fungi and fungal metabolites [7].

Mold odor at home or work was associated with reduced lung function, especially in women [8].

Exposure to dampness and mold is associated with a significantly increased incidence of asthma [9, 10].

Asthmatic children living in mold-contaminated homes had a higher proportion of blood neutrophils compared to people who were not exposed to mold [10].

In patients with asthma, exposure to mold odor is associated with significantly reduced lung function [11].

In people who are allergic to mold, asthma is more common and much more severe [12].

The presence of visible mold in the home was associated with a worse quality of life, as measured by taking more sick days – both physical and mental [13].

Also, in patients with asthma, exposure to workplace dampness and mold was associated with a reduced quality of life [14].

A questionnaire study was performed with 36,541 randomized parents. It found that moldy homes were associated with inflammation in the eyes, nose, throat, and skin [21].

Reported mold or mold odors were associated with a 70% increase in reporting one of the following symptoms [22]:

In another school study, mold or water damage was associated with respiratory infections, eye irritation, nasal congestion, and sore throat [23].

In a questionnaire study of 36,541 parents, moldy homes were associated with headache and fatigue in the people who lived in them [21].

6) A Link to Autoimmunity?

In one study with 209 people, abnormally high levels of antibodies were found (ANA and antibodies against myelin) in people exposed to mold. The researchers who made this observation argued that mold may, therefore, be associated with lupus and multiple sclerosis [24]. However, this study had poor design and selection bias.

One Swedish study of 7500 participants found that people were up to twice as likely to have eczema in buildings with mold odor, condensation, and high humidity [25].

Another American study of 8400 people also found that people were close to twice as likely to have eczema in building with a musty odor [26].

Saccharomyces cerevisiae is a common species of yeast sometimes called baker’s or brewer’s yeast. While not a mold, it is a fungus. One study argues that S. cerevisiae presents the closest evidence we have linking fungi to autoimmune disease [27].

Antibodies against S. cerevisiae were found in 60–70% of patients with Crohn’s disease, and 10-15% in ulcerative colitis compared to 0-5% in healthy people [29].

Some researchers believe that a protein in yeast is similar to proteins in our body, and the immune system can get “confused” and start attacking its own, similar proteins [28].

A Link to Alzheimer’s?

One study laid out 7 case reports of people who had Alzheimer’s or Alzheimer’s-like symptoms, which they believed may have been associated with various strains of mold found in their houses [30].

However, there is no well-documented link between Alzheimer’s disease and mold. This is simply the early speculation of a single author.

Exposure to fungi or spores can lead to systemic fungal infection, also known as mycosis [31].

This is more common in people with compromised immune systems, for example, systemic lupus erythematosus, who are more likely to get certain fungi infections [32].

One study showed an increased incidence of mycosis in alcoholic liver disease patients, which was further associated with increased mortality [33].

The use of antibiotics, pregnancy, diabetes, and HIV/AIDSare linked to vaginal yeast infections, whereas clothing and personal hygiene do not appear to have an effect [34].

If your home or office has taken on water or flooded, remediation should be rapid and complete. Everything should be thoroughly dried and may need to be removed if mold is already present [36]. Mold can develop within 48 hours of taking on water [37].

When in doubt, call a professional cleaning service. If you believe that mold exposure has caused health problems for you or someone close to you, seek medical attention.

Do You Suspect Mold?

It’s very hard to pinpoint whether a certain health issue started as a result of mold or another underlying factor or health condition. There are other possibilities, such as air pollution, VOCs, carbon dioxide, environmental chemicals, radon, tobacco smoke, and airborne infections that could also cause someone to be sick.

If you suspect that mold plays a role in your health issues, talk to your doctor about this possibility. They will help you rule out other underlying factors and identify whether mold is the culprit.

35 Supplements That May Boost Mood