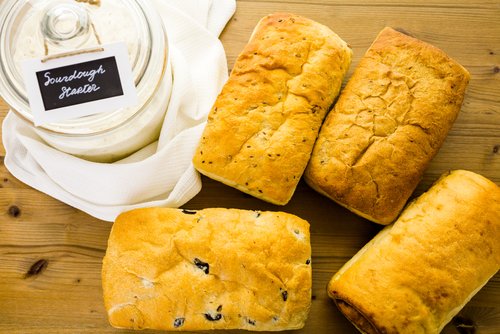 S. cerevisiae, also known as brewer’s or baker’s yeast, is full of nutrients and is a promising probiotic for gut health, skin health, and wound healing. Read on to learn more.

What is Saccharomyces cerevisiae?

Saccharomyces cerevisiae is the yeast commonly referred to as brewer or baker’s yeast. This microorganism has been instrumental to winemaking, baking, and brewing since ancient times.

The commercial product known as “nutritional yeast” contains the inactivated S. cerevisiae. This product is high in protein, fiber, and B vitamins, especially folate.

S. cerevisiae is a veterinary probiotic widely used in animal nutrition [1]. Although several S. cerevisiae strains have proven probiotic potential in humans, only the related S. boulardii is currently licensed for use as a human probiotic [1].

S. cerevisiae is a rich dietary source of folate [2].

S. cerevisiae was shown to increase the folate contents of rye flour-water mixtures [3].

S. cerevisiae probiotic supplements have not been approved by the FDA for medical use. Supplements generally lack solid clinical research. Regulations set manufacturing standards for them but don’t guarantee that they’re safe or effective. Speak with your doctor before supplementing.

The following purported benefits are only supported by limited, low-quality clinical studies. There is insufficient evidence to support the use of S. cerevisiae for any of the below-listed uses. Remember to speak with a doctor before taking S. cerevisiae probiotics, and never use them in place of something your doctor recommends or prescribes.

In another trial, however, S. cerevisiae had no beneficial effect on IBS symptoms and wellbeing. However, it seemed to have some effect in the subgroup with constipation [7].

S. cerevisiae extract (SCE) is used in cosmetics, where it reduces oxidative stress and improves skin conditions. It was shown to enhance skin moisture and skin microrelief in volunteers [10].

Topical treatment with a water-insoluble glucan from S. cerevisiae enhanced venous ulcer healing in humans. In a patient who had an ulcer that would not heal for over 15 years, this treatment caused a 67.8% decrease in the area of the ulcer [11].

No clinical evidence supports the use of S. cerevisiae for any of the conditions listed in this section. Below is a summary of the existing animal and cell-based research, which should guide further investigational efforts. However, the studies listed below should not be interpreted as supportive of any health benefit.

Phytic acid (phytate) is found in many cereal grains, oilseeds, legumes, flours, and brans. It forms insoluble complexes with minerals such as iron, zinc, calcium, and magnesium, and lowers their bioavailability. Humans lack the enzymes for phytate complex degradation [2].

By degrading phytate, S. cerevisiae may improve the absorption of iron, zinc, magnesium, and phosphorus [2, 12].

Agricultural products, food and animal feeds can be contaminated by mycotoxins, specific toxins produced by fungi. These toxins can lead to various diseases in humans and livestock.

Vaginal administration of S. cerevisiae positively influences the course of vaginal candidiasis by accelerating the clearance of Candida [15].

S. cerevisiae, as monotherapy or as an adjuvant, accelerated the tissue-repair process and ameliorated periodontitis in rats [19].

Gastrointestinal mucositis is a major and serious side effect of cancer therapy. S. cerevisiae reduced oxidative stress, prevented weight loss and intestinal lesions, and maintained the integrity of the mucosal barrier in mice with mucositis [21].

S. cerevisiae is consumed on a daily basis worldwide. Although it is generally safe, in rare cases, S. cerevisiae may cause infections [22] and allergic responses [23].

Anti-S. cerevisiae antibodies (ASCA) have been found in many autoimmune diseases in which increased intestinal permeability occurs, including type 1 diabetes, coeliac disease, Crohn’s disease, and others [24, 25, 26]. High ASCA were also found in obesity [27].

To avoid any adverse effects or unexpected interactions, talk to your doctor before starting any new probiotic supplements.

In cell and animal studies, researchers have observed that S. cerevisiae: