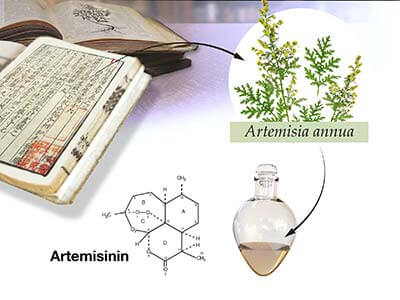 Artemisinin, a compound of sweet wormwood, is among the best treatments for malaria and has produced promising results in cancer trials, but the WHO has sternly warned against using it without a doctor’s recommendation. Read on to learn more.

This compound (along with its derivative drugs), is part of the World Health Organization’s recommended treatment of uncomplicated malaria caused by Plasmodium falciparum [1].

The drug and its derivatives have been so effective in treating the disease, that Youyou Tu received the Nobel Prize in Physiology or Medicine in 2015 for discovering it [2].

A number of semi-synthetic derivatives were also prepared from this herb for use in malaria treatment programs. The best among them include artemether, artesunate, and artenimol (β-dihydroartemisinin, DHA) [3].

The WHO has warned against using uncompounded artemisinin or using artemisinin for any purpose other than malaria treatment, citing the possible disaster that could occur if Plasmodium falciparum developed a resistance to the drug [4].

As such, we strongly recommend against using artemisinin without the express prescription of a medical professional.

According to the WHO, artemisinin is a central part of the most effective treatment for uncomplicated malaria. The malaria parasite, Plasmodium falciparum, is far less likely to develop resistance to treatment when artemisinin is included in combination with other antimalarial drugs; hence, the WHO has recommended the use of artemisinin combination therapies (ACTs) in patients with malaria [4, 5].

Artemisinin is about 90% effective in curing uncomplicated malaria caused by Plasmodium falciparum. However, the widespread use of drug monotherapy has resulted in the development of resistance to malarial parasites [4].

Several combination therapies have shown high efficacy against sexual and asexual stages of both chloroquine resistant and sensitive P. vivax [6].

No clinical evidence supports the use of artemisinin for any of the conditions listed in this section. Below is a summary of the existing animal and cell-based research, which should guide further investigational efforts. However, the studies listed below should not be interpreted as supportive of any health benefit.

Artemisinin and its derivatives have shown positive immune and anti-inflammatory effects as well [8].

In lab experiments, they could inhibit IL-1β, IL-6, and IL-8 production from synovial cells of Rheumatoid Arthritis patients [9].

At the same time, it could selectively enhance the T-cell function in mice [11].

Artemisinin reduced the replication rates of Hepatitis B and C viruses and a range of human herpesvirus [15, 16, 17, 18].

In one randomized controlled trial, artesunate combined with NP (a chemotherapy regimen of vinorelbine and cisplatin) elevated the short-term survival rate of patients with advanced non-small cell lung cancer (NSCLC) [19, 20].

Artemether treatment was beneficial in improving the quality of life of a 75-year old male patient with pituitary macroadenoma [22].

Many substances have anti-cancer effects in cells, including downright toxic chemicals like bleach. This doesn’t mean that they have any medical value. On the contrary, most substances (natural or synthetic) that are researched in cancer cells fail to pass further animal studies or clinical trials due to a lack of safety or efficacy.

Artemisinin and resveratrol possessed a synergistic anti-tumor effect in a cell study [23].

Because of the WHO’s warnings, we strongly recommend against using artemisinin for any reason without a doctor’s prescription.

During the treatment of malaria, 500 mg of artemisinin per day is typically administered for five days [30].

Side effects are similar to the symptoms of malaria: nausea, vomiting, anorexia, and dizziness [31].

A rare but serious adverse effect is an allergic reaction [32].

Artemisinin treatment can cause the red blood cells to rupture, particularly in those with predisposing factors for anemia [33].

To avoid adverse effects and unexpected interactions, only use artemisinin as directed by a medical professional.