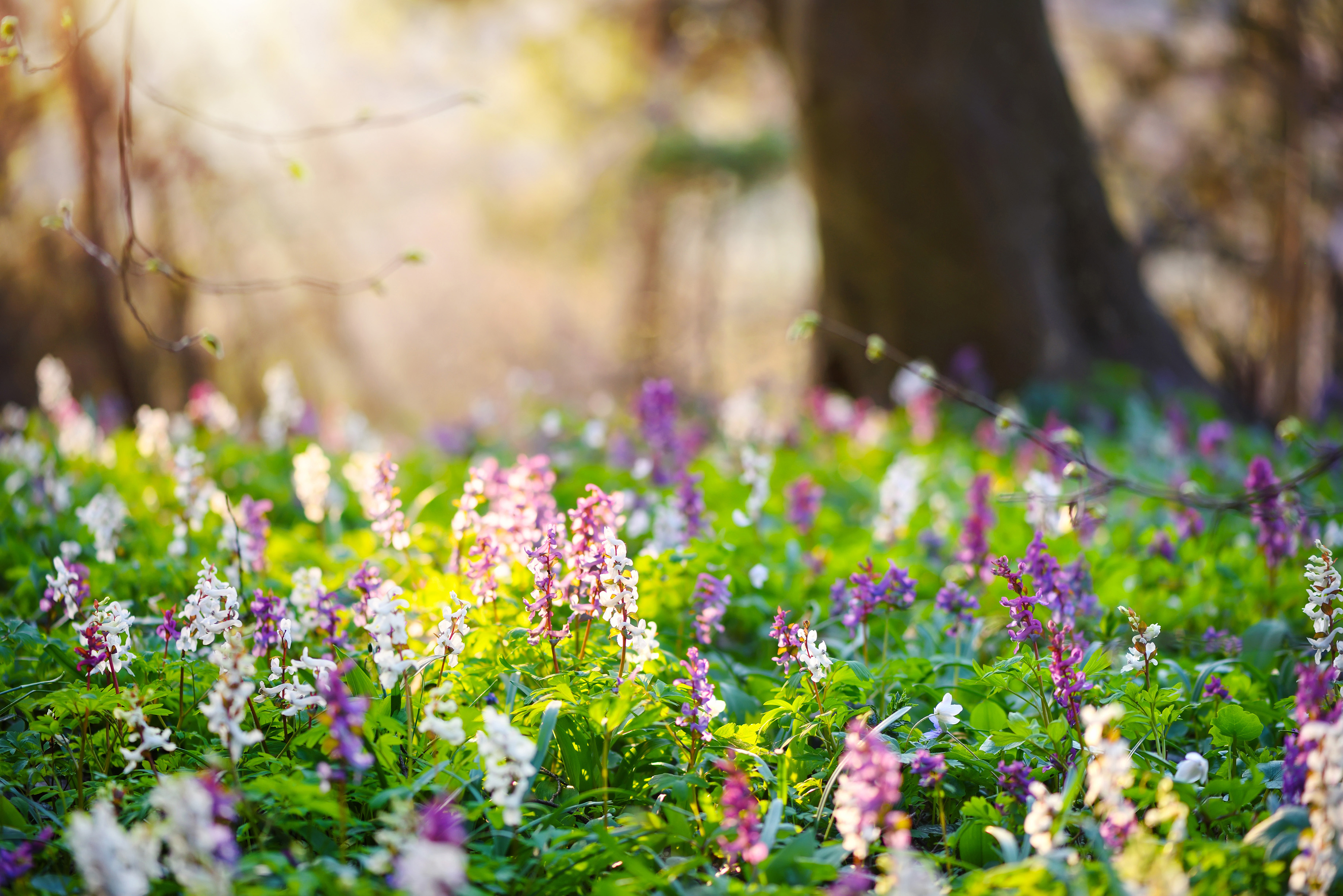 While corydalis might not be well-known in the West, this plant is indispensable in Traditional Chinese Medicine. It’s praised for its ability to reduce pain from osteoarthritis, digestive issues, and nerve damage. Corydalis may also help you relax and combat addictions, but the evidence is limited. Read on to learn the benefits, side effects, and dosage.

Corydalis encompasses over 470 types of plants that grow in the plains of Northern China, Japan, and Siberia. In this article, we’ll focus on Chinese corydalis.

Chinese corydalis is a small plant with thin leaves and pink flowers. This plant belongs to the poppy family and is closely related to the opium (red) poppy. It mostly grows in the mountain regions of Zhejiang, an Eastern Chinese province, where people call it Yan hu suo [1].

Some herbalists claim corydalis is the second most effective pain reliever, right behind opium. Unlike opium, corydalis does not seem to cause severe side effects or lead to addiction. But beware: the evidence to back up its use is limited and it is not safe during pregnancy [2].

In Traditional Chinese Medicine (TCM), corydalis is said to invigorate the blood and move Qi (“life energy”). It is a key ingredient in many TCM formulas for reducing pain and discomfort from the following conditions [2]:

According to TCM, corydalis is blended with other botanicals for enhanced benefits [3, 4, 5].

What makes corydalis plant a popular traditional remedy for pain? The answer lies in corydalis roots. The roots abound in a variety of medicinal alkaloids, such as [6, 7, 8, 9]:

The most concentrated ones – THP, L-THP, DHC, and DHCB – act on the brain to provide pain relief and relaxation [7].

Painkiller Effect – How Does It Work?

Pain is one of your body’s defenses against harmful stimuli. Multiple pathways sync to control pain, and Corydalis alkaloids might help by acting on all the following ones [10, 11, 12, 13]:

The opioids we normally produce – endorphins and enkephalins- help us cope with everyday social situations minimizing fear, pain, and anxiety. These molecules also play an important role in the acute stress response and appetite – all through the opioid receptors [14].

Opioid painkillers strongly activate these receptors and ease chronic, severe pain. DHC in corydalis also activates opioid receptors, while other compounds in the plant may prevent the side effects [15, 13].

Lastly, inflammation is part of the body’s natural response to infection and injury. However, persistent inflammation can turn into chronic pain and DHC helps to lower inflammatory markers (TNF-alpha, IL-1b, and IL-6) [19, 20, 13].

Corydalis might work by activating the opioid system, reducing inflammation, and balancing dopamine in the brain.

Over a third of pain-relieving TCM herbal cocktails use corydalis as a key ingredient. It is particularly popular in remedies for premenstrual syndrome (PMS), menstrual cramps, and endometriosis [21, 22].

In a small clinical study of 79 patients suffering from osteoarthritis, corydalis was as effective as diclofenac at lowering knee pain [24].

Corydalis may reduce pain as well as synthetic anti-inflammatory drugs – but with fewer side effects.

Besides ulcers, persistent burning-like stomach pain can be a sign of indigestion or functional dyspepsia. Symptoms of dyspepsia include sluggish digestion, a heavy feeling after meals, and chronic constipation [25+].

Corydalis root is a key ingredient in DA-9701 or Motilitone – an herbal remedy for functional dyspepsia. In 2 clinical trials with over 800 patients, Motilitone (30-50 mg daily for 4 weeks) greatly improved symptoms of low stomach acid and provided relief from stomach cramps [26, 27, 28].

Stomach ulcers are sores on the lining of the stomach or small intestines that can cause a dull, throbbing pain [29].

Bacterial infection with H. Pylori and chronic use of nonsteroidal anti-inflammatory drugs are two common causes of most ulcers [30, 31, 32].

TCM herbalists describe corydalis a sedative and tranquilizer. It is usually prescribed for anxiety, insomnia, and restless leg syndrome [2].

Corydalis is an ingredient in JWZXG, a popular TCM mixture of 9 herbs. An analysis of 14 clinical trials confirmed it may reduce anxiety. Its effects were similar to azapirones – a class of anti-anxiety drugs. It did not reduce anxiety as much as SSRI antidepressants, yet it was safer and better tolerated [5].

L-THP might also help you fall asleep when you are in pain. In mice with the inflamed sciatic nerve, L-THP treatment led to a deeper, longer sleep [38].

Corydalis may be a useful remedy for anxiety and sleep, but clinical trials are needed to substantiate the benefits.

No valid clinical evidence supports the use of corydalis for any of the conditions in this section. Below is a summary of up-to-date animal studies, cell-based research, or low-quality clinical trials which should spark further investigation. However, you shouldn’t interpret them as supportive of any health benefit.

In the United States, about 130 people die daily from a drug overdose. Overdose-related deaths have increased 6-fold in the past two years, indicating an opioid use crisis. Many of these drugs are potent pain-killing opioids [39].

Although beyond the scope of its traditional uses, corydalis might help battle addictions. Aside from relieving pain, which may lessen the use of synthetic opioids, it also reduces drug cravings [40].

In a clinical study of 119 heroin-addicted patients, L-THP from corydalis (60 mg 2X a day for one month) significantly reduced heroin craving and withdrawal symptoms [41].

In a small clinical trial, 300-600 mg of dl-THP per day improved heart rhythm in patients suffering from a specific type of heart arrhythmia (supra-ventricular premature beat or SVPB). These arrhythmias make people feel as if their heart skipped a beat or is fluttering [51].

No clinical evidence supports the use of corydalis for any of the conditions listed in this section. Below is a summary of the existing animal and cell-based research, which should guide further investigational efforts. However, the studies listed below should not be interpreted as supportive of any health benefit.

When nerves become damaged, the body often responds with sharp, burning-like pain. This type of pain is called neuropathic and it impacts about 10% of adults [58].

In animals with spinal nerve damage, corydalis reduced neuropathic pain. Unlike most painkillers, even high doses of the herb didn’t cause sleepiness or dependence [59].

In another study, corydalis reduced burning sensations and pain in rats with a pinched sciatic nerve. It worked for both sudden (acute) and chronic pain [60].

Corydalis may reduce the pain caused by damaged or pinched nerves without significant adverse effects, but clinical evidence is still lacking.

The scientific research is currently lacking to back up these claims.

Despite centuries-long use, only a handful of clinical studies on corydalis exist. It was investigated for relieving pain, healing stomach ulcers, reducing anxiety, and lowering blood pressure.

To uncover the full medical potential of this plant, further well-designed clinical trials are needed.

General safety information on corydalis is lacking. In limited clinical trials, the plant was well tolerated with minimal side effects.

However, if you plan on using corydalis, here are the precautions you should take:

Corydalis is not recommended for use by pregnant or breastfeeding women. TCM doctors advise to avoid corydalis during pregnancy, as it causes uterine contractions that can lead to miscarriages [62].

Corydalis might be toxic in very large amounts due to the effects of L-tetrahydropalmatine (L-THP).

At least a dozen cases of L-THP toxicity have been recorded, three of them in children [63, 64].

Ingesting large doses of L-THP can cause the following reactions [65]:

That said, corydalis roots contain only a fraction of L-THP, so the risk of poisoning is minimal when taking the whole plant extracts as opposed to purified L-THP.

Corydalis root can be safe at the right doses. Pregnant women should avoid it, while others should consult with their doctor first.

Corydalis alkaloids can potentially interact with [66, 67]:

Can It Cause Hallucinations?

Many alternative health websites claim that corydalis can lead to hallucinations. There is no reported evidence to support these claims.

Since corydalis is not approved by the FDA for any condition, there is no official dose. Practitioners, users, and supplement manufacturers have established unofficial doses based on trial and error. Discuss with your doctor if corydalis may be useful as a complementary approach in your case and which dose you should take.

After harvest, corydalis roots are dried and can be used for medicinal purposes. You can buy the whole root, powder (in bulk or capsules), or tinctures. To help relieve pain, most TCM practitioners recommend the following doses:

Frying corydalis roots in vinegar or alcohol (as in tincture) increases the alkaloid content, which might provide more potent pain relief [61].

Most supplements are available as capsules, with 400-500 mg of corydalis root per capsule. However, corydalis is rarely used alone in TCM. It’s usually combined with other herbs for synergistic effects, which lowers its dose.

The opinions expressed in this section are solely from the users who may or may not have a medical background. SelfHacked does not endorse any specific product, service, or treatment. Do not consider user experiences as medical advice. Never delay or disregard seeking professional medical advice because of something you have read on SelfHacked.

Most users reported good results with corydalis for pain relief. Reviewers mention it helped them with the following:

However, corydalis did not work for everyone. Some users thought the supplement was not more effective than standard painkillers. One person mentioned it made them feel sluggish and impaired their focus.

Corydalis is a time-tested herb in Traditional Chinese Medicine. Its active compounds act in synergy to relieve pain caused by stomach issues, cancer, and osteoarthritis. It may also reduce nerve pain, drug addiction, and anxiety, but the evidence is limited.

Although generally safe, high doses can cause side effects and poisoning. Pregnant women should avoid corydalis, while others should consult with their doctor before supplementing.

13 Health Benefits of Ginger + Side Effects