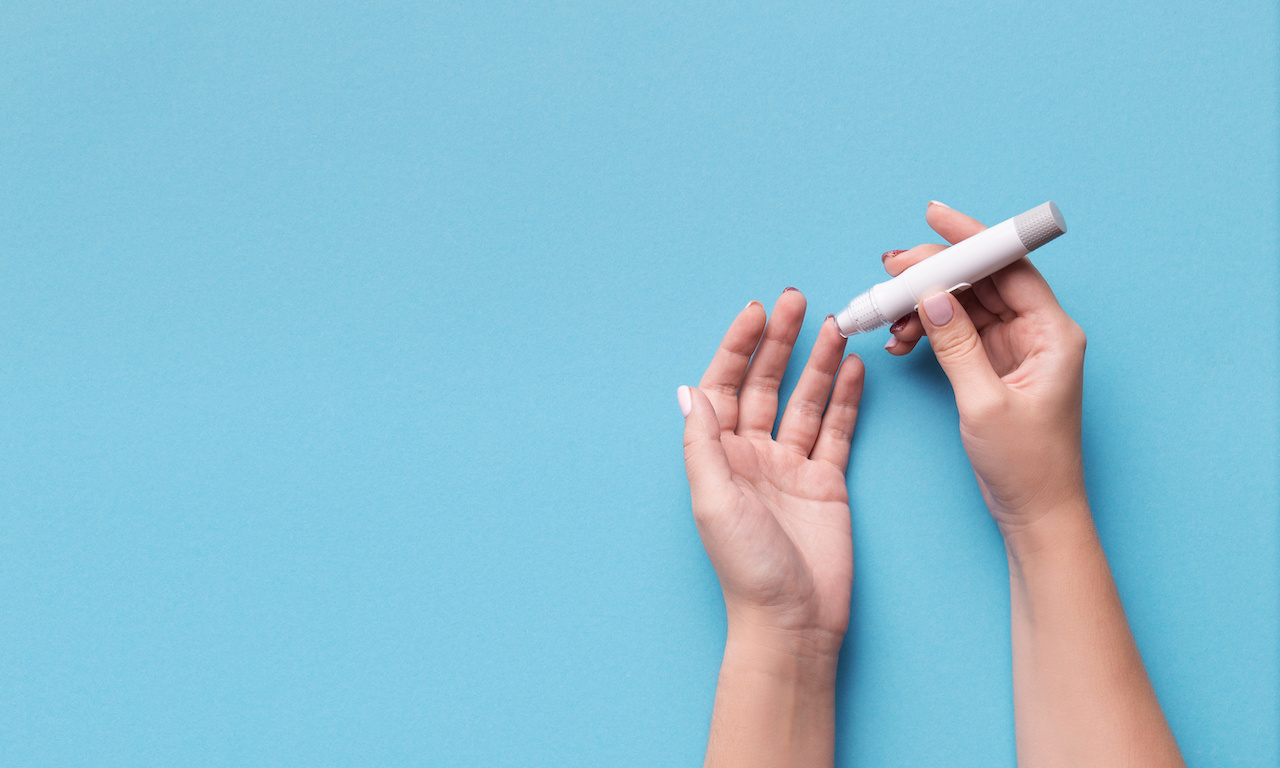 Are you gaining weight easily? Your blood sugar levels may be normal, but what about your insulin? Testing your insulin can reveal hidden problems in the way your body controls your blood sugar, years before they escalate to more serious issues, such as diabetes. Read on to learn more about low & high fasting insulin, what they mean, how they affect your health, and what you can do to improve your levels.

Insulin is a hormone produced by beta cells in the pancreas. When you eat, your digestive system breaks down carbohydrates into glucose, which is absorbed into the blood [1].

The rise in blood sugar stimulates the pancreas to release insulin, which moves glucose from the blood into cells, particularly into muscles and fat tissue. It also moves glucose into the liver, where it is stored as glycogen, a source of energy [1].

In type 1 diabetes (and advanced type 2 diabetes), the body cannot make enough insulin. This causes two big problems. First, the cells of the body become starved because they do not receive the glucose they need for energy. Second, rising blood sugar produces oxidative stress, which can lead to complications such as nerve damage or heart and kidney disease [2].

Type 2 diabetes is characterized by insulin resistance: this is when you are producing enough insulin, but your cells are not getting the message. They are in essence “resistant” to the effects of insulin. The pancreas will try to compensate by releasing extra insulin, which massively raises insulin blood levels [1].

This test measures the insulin levels in your blood after at least 8 hours of fasting. A healthcare professional will collect a blood sample from your vein and send it to a lab for analysis. Other tests that may be performed to evaluate blood sugar and insulin levels include:

Why Is the Test Performed?

Fasting insulin is an important but often overlooked test that can help identify insulin resistance.

Insulin levels are usually out of order long before there are abnormalities in blood sugar levels. That’s why a blood sugar test might come back completely normal even if you are suffering from insulin resistance [4].

Other than to check for insulin resistance, your doctor may order this test to:

How to Prepare for the Test

You will normally be asked to fast (not eat or drink) for at least 8 hours before the test [5].

In healthy people, insulin levels are lowest after not eating for several hours. This is why fasting insulin tests are so reliable: if insulin is high after a fast, something may be very wrong [6].

The normal range of fasting insulin varies somewhat between labs, but around 2 to 20 mIU/mL is considered normal by most [7, 8].

Causes listed below are commonly associated with low insulin. Work with your doctor or another health care professional to get an accurate diagnosis. Your doctor will interpret your insulin result, taking into account your medical history, signs and symptoms, and other test results.

The most common cause of low insulin is type 1 diabetes, an autoimmune disease in which the pancreatic cells that normally produce insulin are destroyed [9, 10, 11].

Diseases that impair pancreatic function or damage the pancreas, other than type 1 diabetes, also lower insulin levels. One example is inflammation in the pancreas or pancreatitis [12, 13].

Insulin levels will also drop after pancreatectomy, a surgery to remove all or part of the pancreas. This procedure may be performed to transplant part of a donor’s healthy pancreas into a diabetic patient [14].

Hypopituitarism or pituitary insufficiency is a rare condition in which the pituitary gland doesn’t make enough hormones. People with this condition have lower insulin levels [15]

Low insulin doesn’t necessarily mean you have a medical condition that requires treatment. But it may point out some serious underlying health issues. Work with your doctor to find out what’s causing your low insulin and to treat any underlying conditions.

Causes listed below are commonly associated with high insulin. Work with your doctor or another health care professional to get an accurate diagnosis. Your doctor will interpret your insulin result, taking into account your medical history, signs and symptoms, and other test results.

Insulin resistance is when the cells become “resistant” to the effects of insulin. The pancreas will try to compensate by releasing extra insulin, which raises insulin blood levels [1].

Insulin resistance as a state can last many years before developing into prediabetes and diabetes.

It’s common in conditions such as obesity and polycystic ovary syndrome [17, 18].

The relationship between obesity and insulin is bidirectional. Obesity impairs the cell’s response to insulin, causing insulin resistance and increasing insulin levels. Higher insulin levels, on the other hand, increase weight gain [19].

Type 2 diabetes (T2DM) is the most common cause of high insulin. In later stages of the disease, the pancreas becomes damaged, and insulin production drops. At this later stage, type 2 diabetes becomes similar to type 1 diabetes [22, 23].

Insulinomas are tumors in the pancreas, usually benign, that produce insulin. Untreated, they can cause anxiety, visual disturbances, dizziness, hunger, heart palpitations, weakness, seizures, and even coma [24, 25].

Apart from insulinomas, insulin can also increase in pancreatic cell hyperplasia, when there are more pancreatic cells made but the cells still appear normal (they are not a tumor) [26, 27].

Cushing’s syndrome is a rare disease that may cause high insulin levels. It is characterized by excess cortisol production, and is usually due to a pituitary tumor. Cushing’s syndrome involves loss of muscle mass, and a diminished ability of muscles to take up insulin from the blood [28, 29].

Acromegaly is another rare disease that causes excess growth hormone and insulin-like growth factor-1 (IGF-1) levels. This disease is most often caused by a tumor in the pituitary gland. High growth hormone stimulates the production of insulin beyond normal levels [30, 31, 32].

Certain drugs may also increase insulin levels. These include:

Elevated insulin doesn’t cause any symptoms in and of itself. In fact, insulin levels can be elevated for years, without causing any other issues.

Metabolic syndrome is a group of health problems that often occur together and increase one’s risk of type 2 diabetes and heart disease. You have metabolic syndrome if you have three or more of the following [39]:

High blood pressure and cholesterol mostly take the blame for heart disease. However, sugar and insulin are also important. Evidence is mounting that insulin and insulin resistance could be at the center of the metabolic problems leading to heart disease [44, 45, 46].

According to several studies, high insulin levels can help predict the risk of heart disease, independent of blood pressure and cholesterol. While it is still not clear whether high insulin can cause heart disease on its own, it is involved without a doubt [47, 48, 49].

High insulin levels are associated with a higher risk of heart disease risk.

In an observational study of almost 10,000 people, those with higher insulin levels were more likely to die from cancer. This was true whether the individual was obese or not [50].

Similarly, a study of 2,000 people who were followed over 15 years found that those with higher insulin levels were more likely to die from cancer. This was again independent of other factors including whether they had diabetes, obesity, or metabolic syndrome [51].

Studies suggest that conditions to which high insulin is tied, including metabolic syndrome and insulin resistance, are themselves linked with a higher risk of cancer [52, 53, 54, 55].

In multiple studies of thousands of people, high insulin was linked with a higher risk of dying from cancer.

In an observational study of 683 people aged 65 years or older, the risk of AD doubled in those with high insulin. Another study of 980 people between the ages of 69 to 78 found a similar link between high insulin and AD [59, 60].

High insulin and insulin resistance may cause or contribute to Alzheimer’s in several ways. A study of 186 late-middle-aged people revealed that insulin resistance accelerated the deposition of beta-amyloid in the brain. As these proteins build up into plaques, cognitive symptoms like memory loss develop [61].

High insulin may promote the buildup of beta-amyloid and Tau proteins in the brain, thereby accelerating Alzheimer’s disease.

The most important thing is to work with your doctor to find out what’s causing your high insulin levels and to treat any underlying conditions.

Change your diet! A healthy diet with a lower caloric intake, with carbohydrates derived from vegetables, fruits, whole grains, legumes, and dairy products is recommended over intake from other carb sources, especially those that contain added fats, sugars, or sodium [62, 63].

Studies have linked eating more fiber to lower insulin levels. Make sure you are consuming enough dietary fiber. High fiber foods include flaxseed, fresh vegetables and beans should be a part of the diet [64].

Lose some weight if overweight. Body fat is the main contributor to insulin resistance [65]. Losing even a small amount of your body weight can be very beneficial.

Losing weight improves how your body responds to insulin and reduces your risk of diabetes. Being obese is the number one risk factor for developing diabetes [66, 67, 68]!

Engage in moderate exercise! Regular exercise is a great way to keep insulin and your glucose levels under control [69, 70, 71, 72].

If you are not getting enough sleep, sleep more. Studies have shown that sleep helps lower insulin levels [73].

However, heavier consumption has a negative effect and increases the risk of type 2 diabetes. Discuss your alcohol intake with your doctor.

Talk to your doctor about the following foods and supplements. Initial studies suggest they may help decrease insulin levels or may be otherwise beneficial against insulin resistance:

Fasting insulin measures the level of insulin in your blood. Fasting insulin outside the normal range could indicate diseases such as type 1 or type 2 diabetes. Higher insulin levels are linked to insulin resistance and may increase the risk of heart disease, cancer, and Alzheimer’s. The best things you can do to lower high insulin are to eat a healthy diet, exercise, and lose weight.