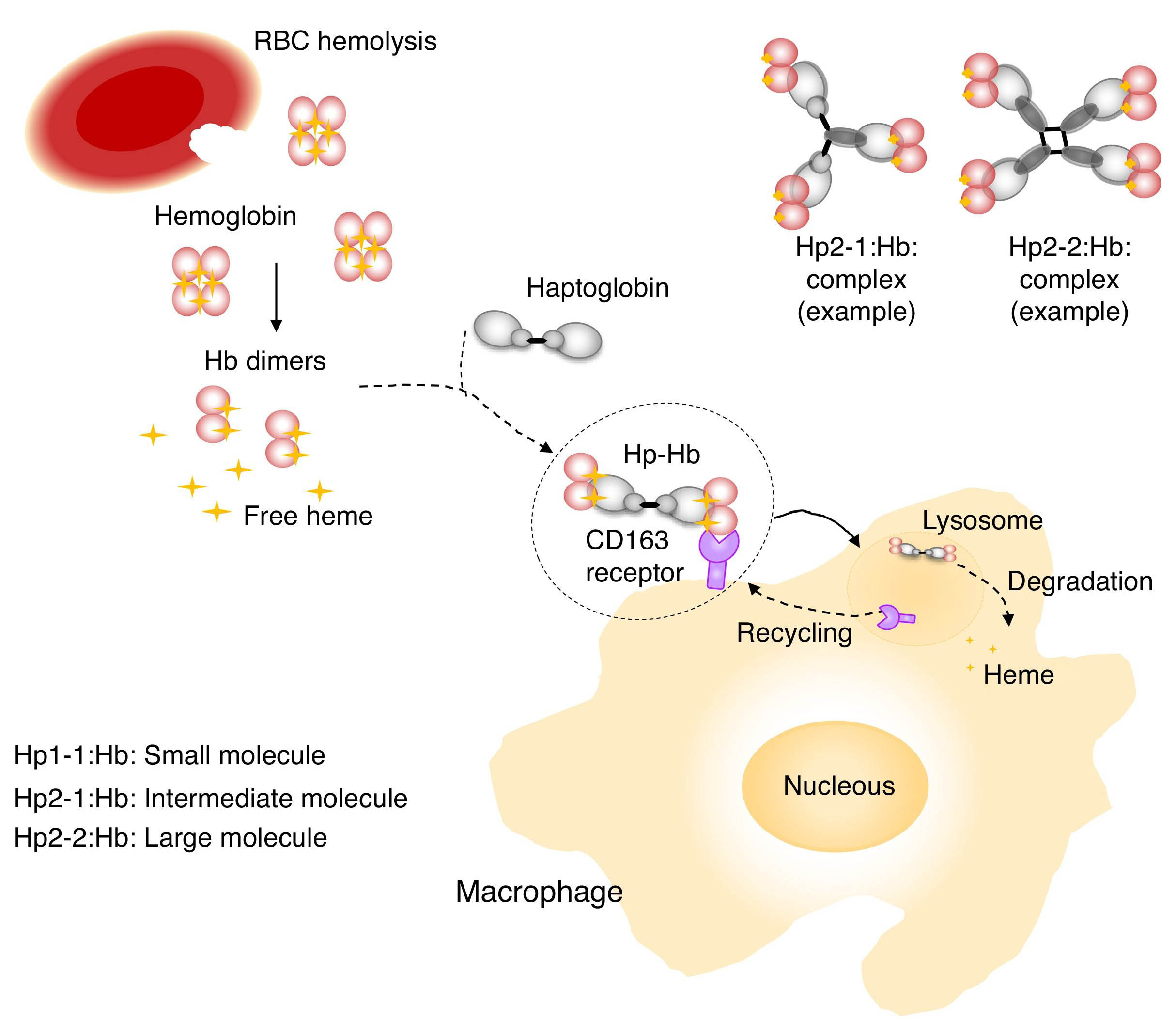 Haptoglobin binds to free hemoglobin and reduces inflammation and oxidative stress. Doctors test hemoglobin to check for abnormal destruction of red blood cells (hemolytic anemia). Common genetic variants in the haptoglobin gene have been associated with heart disease, diabetes, and other inflammatory and immune disorders. Read on to learn more about this protein and the ways in which it keeps you healthy.

Haptoglobin (Hp, medical abbreviation: hpt) is a protein primarily produced in the liver, but also in other tissues including the lungs, fat tissue, skin, spleen, brain, intestine, arterial vessels, and kidneys. It is released into the bloodstream [1, 2].

A major function of haptoglobin is to bind free hemoglobin in the bloodstream.

Hemoglobin is normally found within red blood cells, but gets released when they rupture – this process is called hemolysis. Hemolysis occurs in some diseases, including infections, malaria, and some types of anemia.

Apart from normally being found in the body, haptoglobin can also be administered during surgery or in some diseases where hemolysis is increased.

Haptoglobin is mainly produced by liver cells (hepatocytes). Its production is stimulated by inflammatory cytokines such as IL-1, IL-6, and TNF [3, 4].

Therefore, haptoglobin is an acute phase reactant that increases with infection, inflammation, and injury [5].

Free hemoglobin in the blood causes oxidative damage to cells and tissues, contributing to a number of health issues, including hardening of the arteries and kidney malfunction [6].

Haptoglobin prevents kidney injury by recycling hemoglobin-bound iron and preventing it from accumulating in the kidneys [8].

Haptoglobin has anti-inflammatory potential due to its ability to suppress the production of inflammatory cytokines: TNF-alpha, IL-10, and IL-12 [9].

Mice without haptoglobin developed more severe inflammation in a model of multiple sclerosis [10].

There are currently no studies in humans that focus on haptoglobin’s role in inflammation.

3) May Promote the Growth of New Blood Vessels

Studies suggest that haptoglobin is a growth factor essential to forming new blood vessels. Increased levels of haptoglobin in inflammatory or ischemic (low oxygen) conditions may improve blood supply and promote the growth of collateral vessels, which play an important role in tissue repair [11, 12].

You can check your haptoglobin levels with a blood test.

Your doctor will usually order a haptoglobin test to check for abnormal destruction of red blood cells (hemolytic anemia), and to distinguish this type of anemia from anemia due to other causes, such as iron-deficiency.

Although haptoglobin can detect hemolytic anemia, it can’t tell what’s causing it. If needed, your doctor will run other follow up tests.

In addition, this test is less reliable in infections and inflammatory conditions [13].

The normal range for haptoglobin is around 35-200 mg/dL. Ranges will vary between laboratories due to differences in equipment, techniques, and chemicals used.

A normal result doesn’t mean that there is no abnormal red blood cell destruction. Your doctor will interpret your results in conjunction with your symptoms, medical history, and other test results.

Causes listed below are commonly associated with low haptoglobin levels. Work with your doctor or another health care professional to get an accurate diagnosis. Your doctor will interpret your results, taking into account your symptoms, medical history, and other test results, such as red blood cell (RBC) count, hemoglobin, hematocrit, and reticulocyte count.

These can decrease haptoglobin:

Haptoglobin levels can decrease during pregnancy with otherwise normal laboratory tests. Usually, Haptoglobin levels return to normal after delivery. This is likely due to the increased retention of fluids (otherwise known as hemodilution) [18, 19].

A lack of haptoglobin in newborns is common. By three months of age, haptoglobin becomes present in the majority of infants [20, 13].

A low haptoglobin, together with high reticulocytes and low RBCs, hemoglobin, and hematocrit points to hemolytic anemia [21].

Hemolytic anemia is a condition that occurs when red blood cells are prematurely destroyed [22].

During red blood cell destruction, substantial amounts of hemoglobin are released into circulation and taken up by haptoglobin. This clearance of excess hemoglobin from the blood depletes haptoglobin. Research suggests that around 80% of people with hemolytic anemia have low haptoglobin levels [14, 15].

Symptoms associated with hemolytic anemia include [23]:

Haptoglobin is an acute phase reactant. This means it’s elevated when there’s inflammation or infection. Once these conditions resolve, levels usually return to normal within several weeks.

Causes listed below are commonly associated with high haptoglobin levels. Work with your doctor or another health care professional to get an accurate diagnosis.

These can increase haptoglobin:

In humans, there are two common variants of haptoglobin, Hp1, and Hp2. Most people carry two copies of either variant or a copy of each [35, 36]:

Scientists think that Hp1 was the original variant. Hp2 is thought to have originated in India about 2 million years ago and has since spread all over the world [11].

Hp1 is more efficient in inhibiting damage caused by free hemoglobin compared to the Hp2 variant. The activity by genotypes is as follows [37, 41]:

Apart from the Hp1 and Hp2 variants, there are other mutations in this gene that can cause a lack (Hp0) or an excess of haptoglobin in humans [42].

Before we dive into the research associated with this gene, keep in mind that the studies below are largely based on association, suggesting that certain genetic variants, such as Hp1-1 or Hp2-2, are more or less common in people with these conditions. More research is needed to know what role, if any, Hp1 and Hp2 variants play in actually contributing to these conditions.

In addition, all these conditions are dependent on a multitude of factors, and haptoglobin variants may have only a minor effect. Therefore, just because you may have the Hp1-1, Hp1-2, or Hp2-2 genotype, that doesn’t necessarily mean you are at an increased or decreased risk of developing any of these conditions!

Studies suggest that people with Hp1-1 may have a stronger Th1 response [12].

Research suggests that Hp1-1 may be beneficial against:

Hp1-1 has been associated with an increased risk of:

Hp1-2 genotype has been associated with an increased risk of:

Research suggests that H2-2 may be beneficial against:

However, studies have found a link between Hp2-2 and increased risk of:

A study in 400 people found that diabetic individuals who were Hp2-2 were 5 times more likely to have heart disease compared to diabetic Hp1-1 individuals [7, 68].

Scientists suspect that a slower rate of free hemoglobin clearance in those with the Hp2 variant may increase the hardening of the arteries and therefore poses a greater risk for heart disease [7].

Studies have found an association between Hp2-2 and a higher risk of heart attack, stroke, and heart failure. The Hp2-2 genotype has also been associated with other complications such as aneurysms, carotid plaque ruptures, and decreased survival after coronary artery bypass [12].

Furthermore, studies suggest that people with the Hp 2-2 variants have lower blood haptoglobin levels, which may additionally contribute to heart disease development [38].

Hp2-2 people who have diabetes may benefit from antioxidant supplementation such as vitamin E, iron chelators, or a combination of both to reduce the severity of heart disease [35].

A meta-analysis of 8 studies with 3,939 patients showed that Hp2-2 carriers with diabetes benefited from vitamin E supplementation [69].

According to scientific reviews, supplementation with vitamin E in Hp2-2 individuals has the potential to reduce cardiovascular events by up to 35 – 50% [70, 71].

In a study of 20 diabetics, vitamin E improved blood vessel function individuals with Hp2-2 after eight weeks of treatment [72].

Remember, always consult a doctor or another health care professional before using supplements as they may interact with your health condition or your medication!

Prehaptoglobin-2, a precursor of Hp2 (the protein that Hp2 is made from), is also called zonulin. Zonulin causes tight junctions in the gut to open, thereby increasing intestinal permeability [4, 12].

Zonulin is increased in immune and inflammatory diseases related to increased gut permeability, such as celiac disease and type 1 and type 2 diabetes [4, 12].

Some scientists think that people with Hp2-2 (2 Hp2 variants) may have an increased risk of immune and inflammatory disorders due to higher intestinal permeability [4].

This variant results in a nonfunctional gene (no protein product). People with two copies of this variant don’t have detectable haptoglobin levels in the blood. Hp0 is found mainly in East Asia (1-4%) [73, 74].

Hp0 increases the risk of anaphylactic reaction after blood transfusion (due to anti-haptoglobin antibodies) [74].

The A variant of rs5472 has been associated with higher Hp levels [75].

The G variant is associated with higher Hp levels (‘GG’ and ‘GA’ compared to ‘AA’ carriers) [76].

The A variant has been associated with higher total and LDL cholesterol [76, 77].

Studies have found that the T variant of rs8062041 may be protective against sleeping sickness in Africans [78].

Causes of Low / High Hemoglobin Levels & How to Improve

Potential Dangers of High Ferritin Levels + How to Reduce It