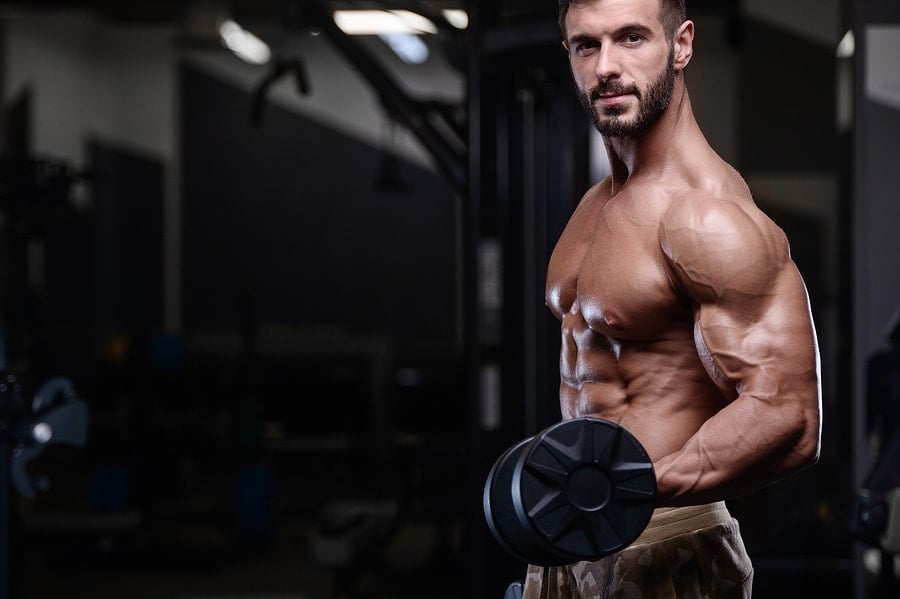 Ibutamoren mesylate (MK-677) stimulates growth hormones, but studies have found potential harm and side effects. Why do people use it? What are the dangers? Read on to find out.

Disclaimer: By writing this post, we are not recommending this drug. Some of our readers who were already taking the drug requested that we commission a post on it, and we are simply providing information that is available in the clinical and scientific literature.

We strongly recommend against taking ibutamoren for any reason. This drug was never approved for human use. It is considered unsafe and ineffective.

Ibutamoren is frequently discussed on online forums for its muscle-building properties. It is available online and used by those wishing to increase their growth hormone levels. Be aware, however, that it is illegal to sell ibutamoren for human consumption.

However, clinical studies of this compound are few. Below we will highlight the current knowledge about ibutamoren.

Ibutamoren (also known as ibutamoren mesylate or MK-677), is thought to promote the secretion of the growth hormone (GH) and increase insulin-like growth factor 1 (IGF-1) [1, 2].

Therefore, some people expect that ibutamoren may also affect these functions. However, so far, clinical studies describe only the effects ibutamoren has on appetite – and as expected, like ghrelin, ibutamoren increases it.

According to some studies, ibutamoren could potentially increase growth hormone levels with little or no increase in other hormones, such as cortisol. Cortisol suppresses the immune system, reduces wound healing, and impairs learning and memory, and it’s usually not good to have this hormone elevated [4, 5].

Ibutamoren is an unapproved drug that may raise growth hormone and IGF-1. It is believed to have no impact on other hormones such as cortisol.

Why Some People Use Ibutamoren

Remember that none of the following uses are backed up by sufficient clinical studies. Almost all of these points are based on a proposed increase in growth hormone; people assume that ibutamoren increases the effects of growth hormone, as well.

However, because of the lack of research and insufficient safety data, we believe you’re better off talking to your doctor about approved growth hormone drugs or lifestyle & supplement changes that have been shown to increase growth hormone.

We strongly recommend that you do not take ibutamoren for any purpose. It has already been shown to have dangerous side effects, and more adverse effects may yet be discovered.

Ibutamoren is frequently used as an anabolic substance, to increase lean body mass – in other words, to create bigger muscles. It is orally active and can be taken once a day.

By boosting growth hormone and IGF-1, ibutamoren may increase muscle mass and reduce body fat. It’s popular among bodybuilders and can be taken orally. However, its purported benefits are unproven, and it may be unsafe.
8 Ways To Use Your DNA & Optimize Your Health

In a study of eight food-deprived healthy volunteers, ibutamoren reversed protein loss that could cause muscle wasting [9].

In 123 elderly patients with hip fracture, ibutamoren improved gait speed and muscle strength and reduced the number of falls [10].

Growth hormone (GH) increases bone turnover and eventually bone density. However, because of the increased turnover in subjects treated with growth hormone, bone density can initially drop before increasing [2, 11].

Basically, it takes time (over a year) to see the bone density increase.

In one study with 292 postmenopausal women, ibutamoren increased bone mineral density, which helps increase bone strength and is thought to prevent osteoporosis [13].

These initial studies show some promise, but they are not of high enough quality to prove a benefit to bone density. Future clinical trials may provide further evidence and shine a light on any adverse side effects.

Ibutamoren improves bone mineral density in the long run, though it may initially lower it due to increased bone turnover. However, the evidence of this effect is still considered insufficient.

Apart from scientific studies, there have been many reports of improved sleep quality across online forums. However, these reports may be due to a placebo effect. User experiences are never enough evidence to try potentially dangerous unapproved drugs.

Growth Hormone (GH) secretion and muscle mass both decline from mid-puberty throughout life [2].

In a study with 65 older adults, daily ibutamoren increased GH and IGF-1 levels to those of healthy young adults without serious adverse effects [2].

Ibutamoren’s potential effect on lifespan is still under investigation. Current available studies have been small and of relatively low quality; they are considered too small to prove a benefit, especially given the unknown safety profile of this drug.

Ibutamoren may promote longevity by increasing growth hormone and IGF-1. However, this potential benefit is based on very small, low-quality studies.

Some people use ibutamoren as a nootropic because it acts on the ghrelin receptor, which has nootropic effects. You can read more about these effects in the post on ghrelin. Science is, however, yet to determine if and how ibutamoren affects cognitive performance.

Two indirect mechanisms by which ibutamoren may improve brain function include:

A study questioned the association of low IGF-1 and Alzheimer’s disease, and whether ibutamoren could help. However, in this study, ibutamoren was ineffective at slowing the progression of Alzheimer’s in humans [20].

Some users claim ibutamoren has nootropic effects. It might boost cognition by improving sleep quality and increasing IGF-1, but the only clinical trial testing this hypothesis found no nootropic benefit.

It had a similar effect on severely GH-deficient men, but insulin and glucose increased, too [22].

Growth hormone increases tissue regeneration and wound healing, so ibutamoren might help with these [23, 24].

There are individual reports of ibutamoren being helpful, but scientific studies are lacking.

Comprehensive clinical testing is required to determine the side effects of a drug, and ibutamoren has not undergone such testing. Thus, ibutamoren may have other (potentially severe) side effects which have not yet been discovered. That’s why we say you shouldn’t take this drug: we don’t know enough about its safety profile.

That said, the most frequent side effects of ibutamoren in the existing literature are increased appetite, mild lower extremity edema, and muscle pain [2].

Several studies report an increase in fasting blood glucose and a decrease in insulin sensitivity [2, 22].

These side effects are similar to those observed in people with elevated growth hormone levels, mainly joint pain and insulin resistance [25, 26].

Although most studies report little or no side effects, one study was terminated because of serious adverse events. That’s a big deal and usually a sign that researchers considered the compound extremely unsafe. Stopping a clinical trial because of adverse events is a giant red flag and a very good reason not to take the compound in question.

It would be prudent not to take ibutamoren because of these dangers.

As an anabolic, ibutamoren should be avoided if you have cancer. Both growth hormone and IGF-1 may promote cancer growth [27].

We would not recommend taking ibutamoren for any reason, but especially if you are Th1 dominant, since growth hormone has immune-stimulatory properties.

Ibutamoren may cause muscle pain and heart failure. It can raise blood glucose, appetite, insulin resistance, blood pressure, and cancer growth. Small and limited studies have already found serious adverse events suggesting that this is an unsafe compound.

Ibutamoren is an unapproved drug that may boost growth hormone (GH) and IGF-1. Unlike other GH stimulators, it can be taken orally, once daily. Bodybuilders use ibutamoren to build muscle and lose fat. Some people claim that ibutamoren can also improve bone density, sleep, and cognitive function, but there are no studies to back this up. Ibutamoren may cause leg swelling, muscle pain, and insulin resistance. In rare cases, it may increase blood pressure and cause heart failure. Cancer patients should avoid ibutamoren, since it may feed the growth of tumors. Clinical trials have, thus far, been too small to reliably identify adverse effects; the safety profile of ibutamoren is thus incomplete. We recommend strongly against taking ibutamoren for any reason.

We at SelfDecode advise speaking to a doctor before taking any drug, especially an unscheduled drug with limited long-term safety data in humans.