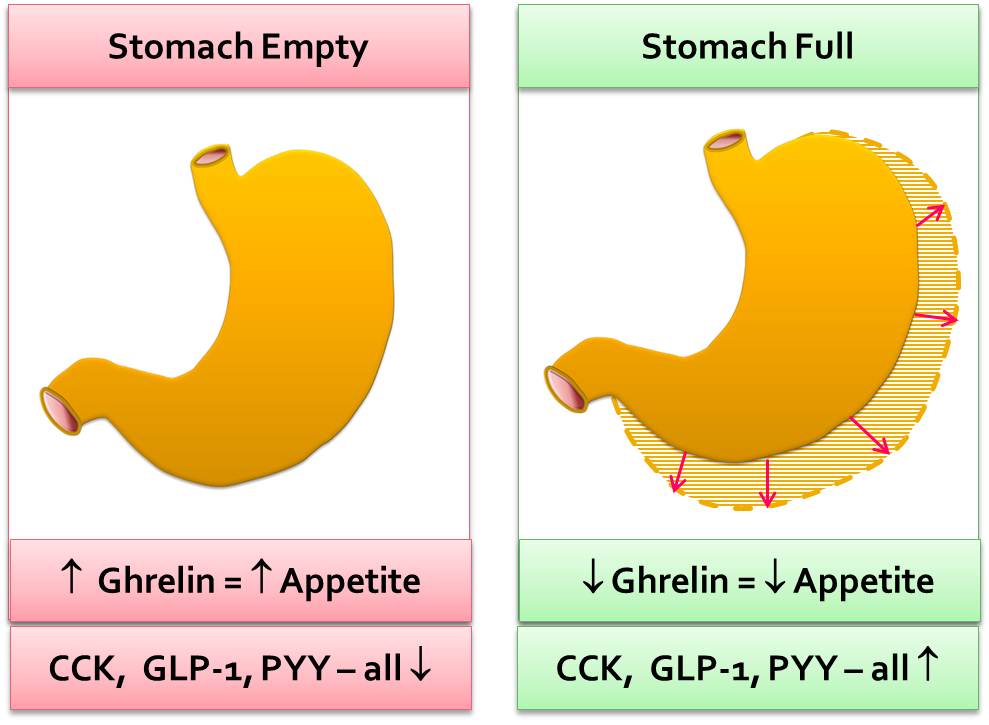 Known as the hunger hormone, ghrelin stimulates appetite and promotes eating. It isn’t necessarily “good” or “bad,” though it may become dysregulated in various health conditions and disease states. When is ghrelin beneficial, and when can it do harm? Learn more here. 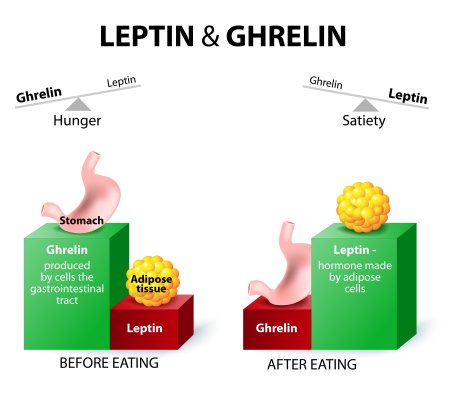 Ghrelin is a hunger hormone that stimulates appetite and is mainly produced by specialized stomach cells [1, 2].

Ghrelin is considered a multi-functional hormone that is also produced by various tissues and organs including the gut, pancreas, kidney, reproductive organs, placenta, bone, and brain [3, 4, 5].

Injections of ghrelin in both humans and mice have been shown to increase food intake in a dose-dependent manner: the more ghrelin someone has in their bloodstream, the more they eat [6, 7].

The less body fat we carry, the more ghrelin we produce: a mechanism by which the body maintains body weight and promote increased food intake if it doesn’t have sufficient fat reserves [8].

Ghrelin gets released into the blood and goes into the brain, where it sends a hunger signal to the hypothalamus. Ghrelin receptors are found in high concentrations in the hypothalamus of the brain and in the pituitary gland [9, 10].

This section is a discussion of the role of ghrelin in general health. None of these should be taken as a reason to try to increase ghrelin levels artificially; if the ghrelin system is dysregulated, an underlying health condition is likely at fault.

If you feel that you are unusually hungry, if you have runaway weight gain, or if you are suffering from another symptom that you believe could be connected to ghrelin, talk to your doctor about the possible causes and appropriate treatment or management plans available to you. 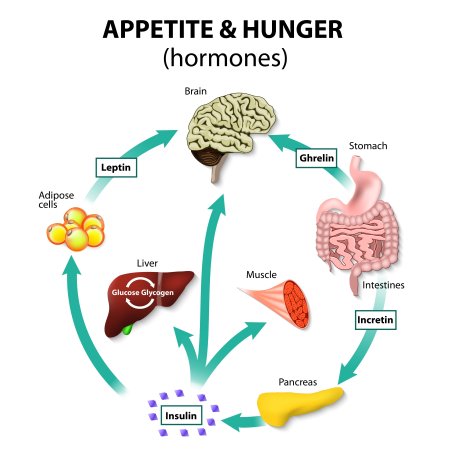 A number of reports describe ghrelin to be a potent anti-inflammatory mediator both in organisms and in cells and a promising therapeutic agent for the treatment of inflammatory diseases and injury.

Ghrelin is needed for immune tolerance. It increases the anti-inflammatory cytokine IL-10 [12].

Ghrelin protects cells against toxic by-products of oxygen reactions and inflammatory injury [12], which is signaled by pain, heat, redness, swelling, and loss of function [17].

Ghrelin protects the lungs, liver, kidneys, and other organs from toxic by-products of oxygen reactions and inflammation injury [12].

Ghrelin has shown potent anti-inflammatory effects in rat and mice models of arthritis, resulting in a slowed progression of the disease [12].

Ghrelin produced in the stomach can enter the hippocampus (an area of the brain important for long-term memory storage) through the blood.

In mouse brains, ghrelin alters the connections between nerves and cells to enhance learning and memory [18, 19].

Restricting calorie intake, which has been shown to increase ghrelin levels, improved memory in elderly people [21].

Ghrelin may enhance neuronal firing by activating the NMDA receptor [19].

Blocking the ghrelin receptor type 1a (GHSR1a) impairs both memory acquisition and memory consolidation in rats [24].

Ghrelin is neuroprotective [25] and activation of the Growth Hormone/IGF-I axis (by ghrelin) is a potential Alzheimer’s treatment [26] and Parkinson’s treatment [27].

When supplemented, Ghrelin dose-dependently increases stomach acid secretion [28, 29], by a mechanism involving the vagus nerve [30, 29] and histamine synthesis and release [31].

In cells, ghrelin dose-dependently enhances the contraction of stomach muscle cells when stimulated [32].

Several studies have shown a dose-dependent effect of ghrelin on quickening stomach emptying and intestinal transit in rodents. The vagus nerve in part mediates this effect [33].

Ghrelin has been shown to have a series of important therapeutic potentials for the treatment of gut motility disorders, such as constipation [33].

The mechanisms responsible for the low blood pressure effects of ghrelin include the suppression of fight or flight activity [37], inhibiting the renin-angiotensin system in humans [38] or direct vasodilatory action [39, 40].

Acute ghrelin treatment improved survival in a heart attack by preventing an increase in the frequency of heart arrhythmias (rats) [41].

In a randomized, double-blind, placebo-controlled study, ghrelin infusion had no acute effect on markers of bone turnover in healthy controls. However, people who had high ghrelin levels had less bone destruction [45].

Many of the benefits of ghrelin come as a result of activating this receptor.

Ghrelin increases the production of mitochondria [25].

Ghrelin is a robust activator of mitochondrial function in the hypothalamus [25].

Ghrelin reduces free radicals by increasing UCP2 in the brain [25].

Ghrelin has been shown to stimulate AMPK and SIRT1 [33].

This dopamine release and amplification can increase physical activity [49] and motivation.

This section is a discussion of the role of ghrelin in general health. None of these should be taken as a reason to try to decrease ghrelin levels artificially; if the ghrelin system is dysregulated, an underlying health condition is likely at fault.

If you feel that you are suffering from symptoms that you believe could be connected to ghrelin, talk to your doctor about the possible causes and appropriate treatment or management plans available to you.

Whether ghrelin acts as an antidepressant or as a depressant is debated.

Recent studies suggest that Ghrelin may have antidepressant properties.

Antidepressant-like behaviors in mice have been observed in response to increased ghrelin levels. These mice were more social and motivated to survive in a forced swim test [51].

However, a study on rats found that ghrelin activity in the brain caused depressive-like behaviors. These rats were less motivated to survive in a forced swim test [52].

Most studies, however, agree that ghrelin is associated with anxiety.

Mice injected with ghrelin had higher levels of the stress hormone cortisol and demonstrated anxiety-like behaviors.

Similar results were found in rats with increased ghrelin levels. These rats were less social and avoided open areas [52].

Ghrelin acts as a signal to the brain to induce food intake [53] and enables the storage of surplus calories in fat cells [54].

People who are trying to lose weight or fasting may produce more ghrelin [55].

The more fat you have, the less ghrelin you produce, which is supposed to make you thinner and keep your weight in homeostasis [8].

Ghrelin favors the accumulation of stomach fat [56], which in turn favors the formation of liver fat and increases the risk of developing insulin resistance [57].

Chronically high levels of ghrelin have been shown to increase food intake and promote fat storage in white and brown fat cells [58].

In healthy individuals, ghrelin is secreted when the stomach is empty, letting you know when it’s time to eat [6].

However, in obese subjects, ghrelin levels do not significantly decrease after a meal [61].

Obese and overweight individuals tend to have lower ghrelin levels than healthy individuals, suggesting that ghrelin does not directly contribute to obesity except in patients with Prader-Willi Syndrome whose exceptionally high levels of ghrelin are correlated with obesity and over-eating [62, 63].

High ghrelin levels are associated with conditions characterized by a lack of energy, resulting in weakness and wasting of the body. Such conditions include anorexia, cancer, chronic disease, and chronic failure of the heart, kidneys, and lungs [67].

When individuals with anorexia nervosa fast, they have higher fasting levels of ghrelin than in healthy individuals. These increased ghrelin levels may be an adaptive response to stimulate eating [68].

According to some researchers, increased ghrelin levels may indicate the development of ghrelin resistance; that is, the body may be producing normal amounts of ghrelin, but it doesn’t stimulate the appetite. This has been demonstrated in animal models: in mice suffering from cancer-related wasting, ghrelin’s ability to stimulate appetite was reduced [69].

Ghrelin treatments have been shown to increase caloric intake in cancer patients with impaired appetite [70] and in healthy volunteers [6].

Ghrelin has been found to counteract muscle and tissue wasting syndromes associated with cancer, heart disease, and chronic disease [12].

Ghrelin has been found to inhibit the function and reproduction of sex cells in male and female animals. In male animals, high ghrelin levels inhibit sperm production [71].

In the female reproductive system, high ghrelin levels prevent changes in the uterus that are necessary for fertilization [72].

This is one mechanism by which calorie restriction may inhibit fertility:

Ghrelin may promote the ability of cancer cells to migrate to and invade other parts of the body (to metastasize) [79].

This spread and growth make cancers difficult to treat, resulting in lower life-expectancy [79].

In a laboratory study of cancer, blocking ghrelin production in cells reduced the spread of cancer [79].

Risk-taking behavior has been observed in hungry animals that take more risks searching for food when they are running low on energy [80, 81].

Ghrelin activates the HPA axis and causes a release of cortisol [22, 83].

Ghrelin levels change throughout the day. They are higher at night and lower during the day [63].

During the day, ghrelin is highest during a fasting period when the stomach is empty, and lowest right after a meal [55].

Doctors won’t often order a ghrelin test; there are better and more reliable alternatives for any conditions that might be indicated by high or low ghrelin.

The “Ghrelin Test” in GH Deficiency

Challenging with ghrelin may help identify growth hormone (GH) deficiency, in particular after aneurysmal subarachnoid hemorrhage. In this test, the patient is given ghrelin intravenously, and their growth hormone levels are monitored thereafter. Because ghrelin strongly provokes GH release, the patient’s response indicates whether or not they have GH deficiency [84].

Some factors have been associated with increased ghrelin production or release in humans. Increasing (or decreasing) ghrelin may or may not be beneficial to one’s health; your doctor can help you decide what strategies are best for your health. Talk to your doctor before making significant changes to your diet, lifestyle, or supplement regimen.

Likewise, some factors have been associated with decreased ghrelin production or release in humans. Decreasing ghrelin may or may not be beneficial to one’s health; your doctor can help you decide what strategies are best for your health. Talk to your doctor before making significant changes to your diet, lifestyle, or supplement regimen.

Start Optimizing Your Health Based On Your Genes

Take a look at your personal genetic data to find the root cause of your health issues and build a regimen that works to overcome any negative health effects from your genes. Start your personalized journey to optimal health with SelfDecode today.