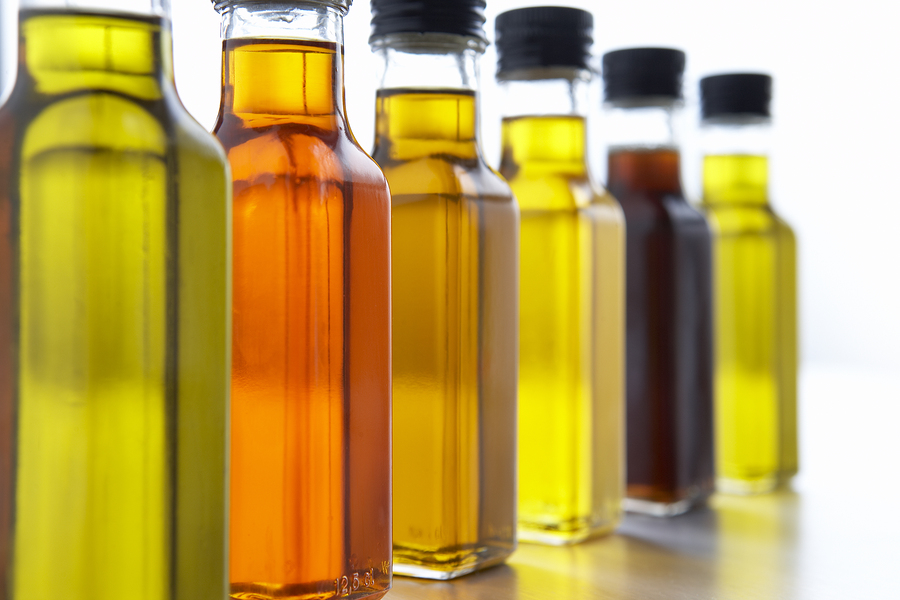 Oleic acid is a major component of olive oil greatly responsible for its beneficial effects on heart health, metabolism, mental health, and more. Besides olive oil, some other oils and fat sources also contain significant amounts of this monounsaturated fatty acid. Keep reading to learn about the benefits, food sources, and safety of oleic acid.

What Is Oleic Acid?

Oleic acid is a non-essential fatty acid, which means it is produced naturally by the human body [1].

Monounsaturated fats have only one double bond and are defined by the number of carbons in their omega side chain. Oleic acid is sometimes abbreviated as (C18:1), referring to its carbon structure [1].

Most naturally occurring monounsaturated fats are of the cis-isomer conformation, referring to the orientation of the double bond. Artificially produced trans-isomers are associated with negative health outcomes [1].

This article focuses on the cis oleic acid isomer.

Olive oil is the largest dietary contributor to human intake of omega-9 monounsaturated fats. Other good sources of oleic acid are in the following table [2].

Oleic Acid in Olive Oil and the Mediterranean Diet

Olive oil is an important component of the Mediterranean diet [3].

The Mediterranean diet has been linked to a variety of health benefits, including improved heart health, lower blood pressure, lower rates of obesity, and lower incidence of type 2 diabetes [3, 5].

Oleic acid is responsible for some of the health benefits of this diet, but other potentially beneficial compounds in olive oil (squalene, antioxidant phenolic alcohols, polyphenols, and vitamin E) also contribute to these benefits [6].

Oleic acid plays an active role in many body processes by changing cell membrane composition and altering which receptors are present on the membrane as a result.

By changing receptor presence at the cellular membrane, oleic acid has the following effects. It:

An increased level of oleic acid in the cell membrane reduces the oxidative damage caused by free radicals [11].

Oleic acid is an important building block of the brain and nervous system. It is required for the formation of myelin and for nerve growth and repair [12].

Please note: the majority of potential oleic acid benefits have been studied as a part of monounsaturated fat-rich diets. These benefits may be partly contributed to other MUFAs, too. Being the most abundant fatty acid in olive oil, oleic acid is mainly responsible for its beneficial effects.

Below we’ll outline the potential benefits of MUFA and olive oil-rich diets, as well as some health effects unique to oleic acid. It’s hard to distinguish the health effects of oleic acid from other biologically active compounds until more research is done.

According to preliminary research, a diet rich in MUFAs may improve heart health by reducing cholesterol and lipid levels, inflammation, and high blood pressure. The Mediterranean diet, with olive oil as the primary fat source, was particularly effective [13, 14, 15, 16].

165 patients who were at high risk for heart disease went on a diet including olive oil. Those patients had decreased blood pressure, total cholesterol, low-density cholesterol, and triglycerides [17].

Increased levels of oleic acid in the vessels of rats fed a high olive oil diet were associated with an increase in receptors that lower blood pressure [20].

Diets high in monounsaturated fatty acids (MUFAs) may be healthier for diabetic patients than low-fat, high-carbohydrate diets. The Mediterranean diet, with olive oil as its main source of fat, improves glucose control and insulin sensitivity [21].

The ADA recommends using this diet to improve blood sugar control. By following this diet, there is a 20%-23% lower risk of developing type 2 diabetes [22].

Olive oil intake is associated with a decreased risk of developing type 2 diabetes, according to a meta-analysis of 29 trials. However, some other substances in olive oil other than oleic acid may also be responsible for these effects [23].

Olive oil-rich diets such as the Mediterranean diet can improve blood sugar control and insulin sensitivity. More research is needed to clear up the role of oleic acid in these benefits.

The Mediterranean diet can help suppress rheumatoid arthritis (RA) symptoms. According to a study of 413 participants, high content of MUFA sources such as olive oil in this diet may be the key to beneficial effects on the joints [25].

In addition, olive oil consumption was associated with a lower risk of rheumatoid arthritis in a study of 330 subjects [26].

43 RA patients given fish oil (high in omega-3) and olive oil (high in MUFA/oleic acid) had the best improvements in both pain and mobility, compared to fish oil alone or a placebo (soy oil) [27].

In a study of 187 women, oleic acid status was associated with increased bone strength, while certain MUFAs showed the opposite connection [28].

Olive oil may improve joint and bone health, and oleic acid is likely responsible for these benefits.

Diets high in MUFA and olive oil correlated with lower levels of depression in a study of 12,059 Spanish students. On the other hand, total fat intake was positively associated with depression [31].

A Mediterranean-like diet rich in olive oil was inversely associated with depression in a trial of 1,362 participants [32].

14 young adults who consumed high amounts of oleic acid over the course of 3 weeks reported less anger compared to those in the high palmitic acid (a saturated fatty acid) group. However, it wasn’t clear if this was due to increased MUFAs or decreased saturated fatty acids [33].

In 20 adolescent boys with ADHD, oleic acid levels in the blood were positively linked with brain plasticity and extrovert personalities [34].

Due to their high oleic acid content and other beneficial compounds, olive oil and Mediterranean diets may improve mood and mental health.

In nearly 3,000 volunteers, increased intake of MUFAs from olive oil was associated with a lower risk of severe skin damage from the sun. On the other hand, there was no association with MUFA intake from animal products [35].

Being the primary fatty acid in olive oil, oleic acid is mainly responsible for the observed skin benefits.

In two studies of more than 5,000 women, those with high levels of oleic acid in their diets were less likely to have cancer [36, 37].

According to a clinical review, diets high in oleic acid correlate with lower rates of breast cancer [39].

However, mice with salivary gland tumors fed an oleic acid-rich diet increased tumor progression, possibly due to a lack of other monounsaturated fats in the diet [40].

Despite the promising preliminary studies, olive oil and other sources of oleic acid can’t be proclaimed effective for cancer prevention or treatment.

No clinical evidence supports the use of oleic acid for any of the conditions listed in this section. Below is a summary of the existing animal and cell-based research, which should guide further investigational efforts. However, the studies listed below should not be interpreted as supportive of any health benefit.

Injection of oleic acid and albumin at the injury site in mice reduced the pain and involuntary movements associated with paralysis after spinal injury [41].

Injections of oleic acid in a mouse pain model reduced pain and inflammation [42].

Dietary Studies Include Many Factors

Determining which components contribute the most to those effects can be difficult without tightly controlled studies, especially when diets were self-reported by participants [43].

Population (epidemiological) studies often did not distinguish between men and women, and many intervention studies had exclusively male participants. In cases where data for men and women were analyzed separately, the effects on blood cholesterol levels were often smaller in women than in men [44].

Oleic acid is generally safe and well-tolerated in the amounts normally present in foods. However, excess levels may be associated with certain health risks.

Omega-9 concentrations (expressed as a percent of the overall cell membrane) in red blood cells of 3,000 patients were correlated with the risk of dying after 10 years. The relationship was nonlinear (U-shaped), indicating that both low and high levels of omega-9 could increase the risk of heart failure and death [45].

Converting one’s diet exclusively to any single fat source can be detrimental.

In mice, increased dietary intake of omega-9 fatty acids (like oleic acid) has been linked to poor reproductive outcomes, including smaller litters of pups and shorter gestation periods. This is likely due to changes in steroid hormone synthesis during gestation [46].

When mothers consumed high oleic acid diets during pregnancy, lowered sperm count and motility were observed in male offspring due to increased DNA damage (fragmentation and oxidative stress) in mice [46].

As mentioned, olive oil is the best and most extensively studied source of oleic acid.