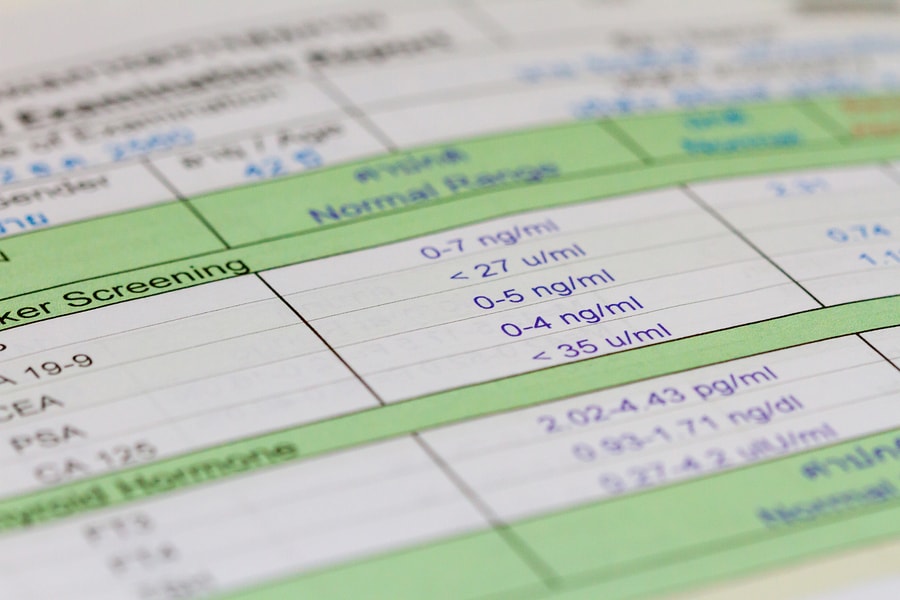 Normal lab ranges are values that 95% of a healthy population falls into. They help doctors make diagnoses and treatment decisions. But they don’t always tell you what’s optimal.

In some cases, normal ranges are created using populations that contain a significant number of unhealthy individuals, leading to ranges that don’t reflect a healthy population.

In addition, normal ranges don’t take into account the large population research that looks at the association of certain ranges with risks for disease and mortality. That’s mainly because there is not enough evidence for a causative link between an optimal level and health for it to guide decision making. When enough evidence accumulates, normal ranges change.

For these reasons, normal ranges for some tests aren’t helpful for the person that is trying to take control of their health or live the longest and healthiest life they can.

However, the opposite is also true. Just because your suboptimal lab value is associated with increased mortality or risk of disease, that doesn’t imply that you have an increased risk of anything. Observational population-level studies need to be followed up with further studies to corroborate or dismiss these associations.

Remember, a lab value in most cases doesn’t mean anything in isolation, your doctor interprets it together with your symptoms, medical history, and other test results, and orders further tests if needed.

TSH is a hormone released by your pituitary gland that tells your thyroid to make thyroid hormones, T4 and T3. The normal reference range for TSH is widely debated by researchers. Most labs have a range somewhere between 0.4 and 6 mIU/L, but many researchers have called for the upper limit to be decreased to between 2.5 and 3 mIU/L. One reason for this is that levels above 2.5 mIU/L have been linked to an increased risk for developing an under-active thyroid (hypothyroidism) and even mortality [1, 2, 3, 4, 5].

Another reason is that the population used to create the original normal range contained a significant number of people with undiagnosed autoimmune thyroid disease. This led to higher TSH levels that don’t represent a truly healthy population. Indeed, recent studies have found that carefully-screened groups without thyroid dysfunction suggest an upper normal limit between 2.1 and 3.7 mIU/L [6, 5, 7, 8, 9, 10].

As you can see, a TSH value within the normal range does not always mean your thyroid is functioning optimally. Talk to your doctor if your TSH levels are on the high end of the range. Your doctor will interpret this test, taking into account your medical history and other test results.

The normal upper limit for triglycerides is 150 mg/dL. But there is a lot of research showing that the upper limit should be much lower.

When scientists reviewed 61 studies with over 726k people, levels below 90 mg/dL were associated with the lowest risk of mortality. Another meta-analysis of almost 14k people found that levels below 88 mg/dL were linked to the lowest mortality risk [11, 12].

Triglycerides above 90 mg/dL have also been linked to a higher risk of developing diabetes [14].

As you can see, for markers like this one, relying on normal ranges can be misleading. It can give you a false sense of security and prevent you from taking steps to improve your levels.

If your triglycerides are higher than optimal, work with your doctor or with another healthcare professional to devise a strategy for improving your triglyceride levels and your overall health!

Most labs use a lower limit of 3 ng/mL to diagnose a folate deficiency, but researchers have called for the limit to be raised to as high as 13 ng/mL [19].

What levels should you aim for if you want to be optimal in terms of health and longevity? Research points to an optimal level that’s much higher than the established normal one.

For example, in a study of 28.8k people, levels below 17 ng/mL were associated with an increased mortality rate [20].

Another study of 1,921 people found that the lowest risk of heart disease was seen in people with levels above 9.6 ng/mL [21].

Levels above 11.3 ng/mL were associated with a 39% reduced risk of lung cancer compared to levels below 7 ng/mL [22].

This shows that the optimal lower limit for folate is much higher than the current normal lower limit, and is another reason why you shouldn’t rely on the established normal range to determine if your levels are truly healthy.

Now bear in mind that folate levels reflect a person’s vegetable and fruit intake, so it’s not unsurprising that lower folate levels have been linked with adverse health effects. If your folate is on the lower side, that means that it may be a good idea to up your intake of fresh fruits and veggies.