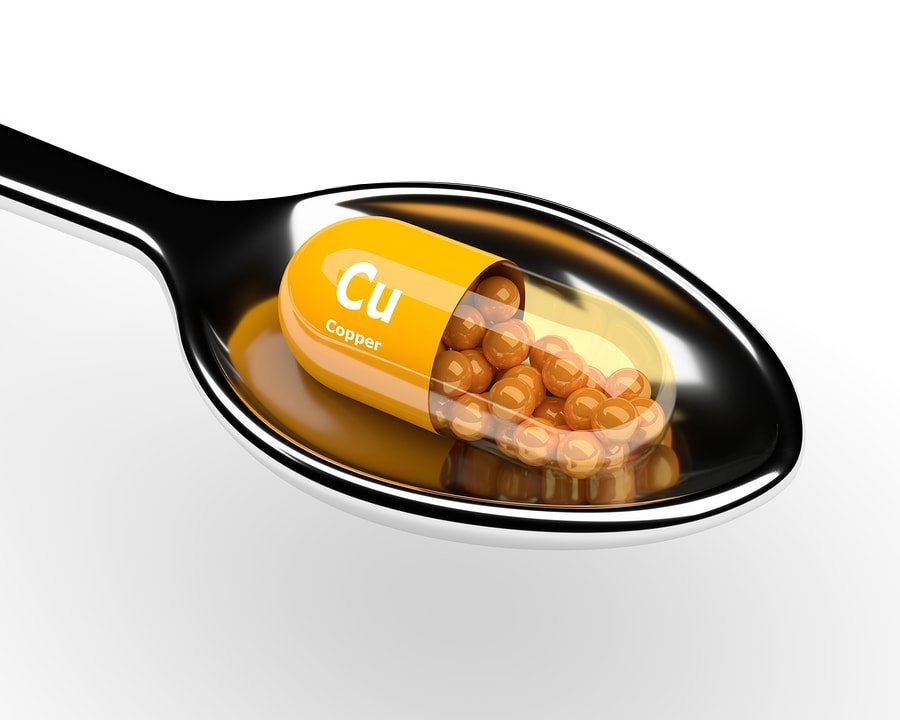 This post will tell you everything you need to know about ceruloplasmin, including the normal range, what it means if your levels are high or low, and much more.

Ceruloplasmin (Cp) is a protein that is bound to and transports most of the copper in the blood. It also plays a role in iron metabolism [1, 2].

Ceruloplasmin has a complex network of interactions in the body, playing a role in many aspects of maintaining health. It is known to interact with at least 125 other proteins [3].

It belongs to a group of proteins called “acute phase” proteins. This means that its levels will rise in inflammation and inflammatory diseases [4].

In addition, it acts as an antioxidant, with the ability to remove hydrogen peroxide and lipid peroxidases [5, 6, 7].

Ceruloplasmin blood tests are used in addition to copper tests to help diagnose Wilson’s disease and other disorders of copper metabolism [8, 9].

How & Where Ceruloplasmin is Produced

Ceruloplasmin has a water-soluble form that circulates in the blood and is primarily made in the liver. It is produced to a much lesser extent in other parts of the body, including the lung, spleen, bladder, gut, and lymph nodes [10].

Production of ceruloplasmin in the liver is stimulated by thyroid hormones [11].

In obese people, up to 22% of the circulating ceruloplasmin is released by fat cells [12].

The second form of ceruloplasmin is anchored to membranes. It is made in the brain, liver, lungs, and kidneys. This form is believed to play an important role in iron transport out of brain and liver cells [13, 14].

Human white blood cells produce both forms of ceruloplasmin, with peripheral blood lymphocytes having higher levels than all other lymphocyte subsets [15].

Ceruloplasmin must have copper attached to it to function.

Its main role is to transport copper throughout the body [16].

Free, unbound copper concentrations in the blood tend to increase when ceruloplasmin levels are low.

Deficiencies in copper can cause low levels of blood ceruloplasmin because the protein is degraded more quickly when it is not bound to copper [19].

Ceruloplasmin helps move iron out from the tissue. In the brain and liver, ceruloplasmin promotes the movement of iron out of cells and onto transferrin, the main iron carrier in blood [20].

Low levels of ceruloplasmin can cause iron accumulation in the brain, liver, and pancreas.

Deficiencies in dietary copper can lead to iron-related problems such as anemia, and it could possibly have to do with ceruloplasmin transporting iron. However, because mice bred without ceruloplasmin were not anemic, scientists think that copper helps iron utilization independently of ceruloplasmin [21].

Another test looks at the activity of ceruloplasmin in the blood. This test is not widely available but it’s more informative when it comes to diagnosing some diseases, such as Wilson’s Disease [23, 22].

Ceruloplasmin is rarely tested in urine samples. In addition, the concentration or activity in specific tissues can be measured, but those measures are generally taken only for research purposes.

Some scientists think that ceruloplasmin blood tests may be overused, as their diagnostic values are low. In other words, ceruloplasmin levels can’t be used to diagnose any specific condition [24].

Causes listed below are commonly associated with lower ceruloplasmin levels. Work with your doctor or another health care professional to get an accurate diagnosis. Your doctor will interpret your test, taking into account your medical history, signs and symptoms, and other test results.

Low ceruloplasmin levels can be caused by:

The ATP7B protein is involved in exporting copper. A defect in this gene can cause copper accumulation in the liver, resulting in liver disease or failure [43].

When copper export is impaired, it becomes unavailable for incorporation into ceruloplasmin. Without copper, ceruloplasmin loses functionality and is broken down more rapidly.

The disease occurs when a mutation in the gene is inherited from both the mother and father. The estimated prevalence of the disease ranges from 1 in 7,000 to 1 in 30,000 people. In England, 1 in 40 people might carry a recessive mutation in one of their two copies of the gene [44].

Wilson’s disease can lead to liver disease or failure, rupture of red blood cells (hemolysis), and neurologic and psychiatric disorders [42].

Without treatment, Wilson’s disease is fatal, but a variety of drug treatments that reduce copper levels in the body are effective in controlling the disease if diagnosed early [42].

Low ceruloplasmin may contribute to:

Ceruloplasmin is most often low due to an underlying health condition That’s why it’s important to work with your doctor to find out what’s causing your low ceruloplasmin and to treat any underlying conditions.

Check your copper levels. Low levels of ceruloplasmin are sometimes linked to low levels of copper. If your copper is low, you may need to increase it. In addition, if you’re taking zinc supplements, you may want to stop or decrease the dosage, since zinc can compete with copper for absorption.

In other cases, low ceruloplasmin is associated with copper overload (e.g. Wilson’s disease) . That’s why it’s important that you don’t start taking copper supplements before checking your levels and getting a green light from your doctor.

Causes listed below are commonly associated with higher ceruloplasmin levels. Work with your doctor or another health care professional to get an accurate diagnosis. Your doctor will interpret your test, taking into account your medical history, signs and symptoms, and other test results.

High ceruloplasmin levels are found in:

The most important thing is to work with your doctor to find out what’s causing your high ceruloplasmin levels and to treat any underlying conditions.

A combination of caloric restriction and exercise reduced ceruloplasmin levels after 6 months in non-smoking, healthy, overweight adults (ages 25 to 50 years) [67].

After 3 months of treatment with melatonin, ceruloplasmin levels decreased in patients with multiple sclerosis [69].

If you also have excess copper levels (copper toxicity), you may benefit from: