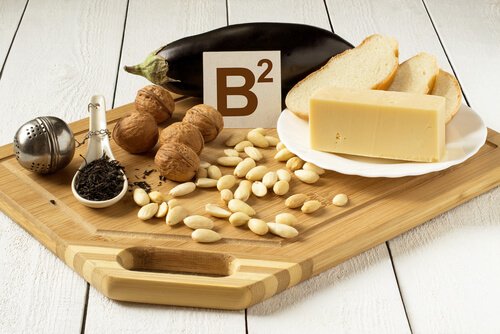 Vitamin B2 (riboflavin) is an essential vitamin that participates in many biological reactions. Supplementation is effective for riboflavin deficiency. In addition, research suggests it may help prevent migraine attacks, cataracts, and bone loss, improve depression, and kill blood-borne pathogens. Read below to learn more about B2, its main health benefits, and recommended doses.

What Is Vitamin B2?

Vitamin B2, also known as riboflavin, is a vitamin that plays an integral role in the body. It is activated to produce the cofactors flavin mononucleotide (FMN) and flavin adenine dinucleotide (FAD), which are necessary for many biological reactions such as those required for breaking down fats, proteins, and carbohydrates [1, 2].

Vitamin B2 is essential to maintain the integrity of mucous membranes, skin, eyes, liver, and nervous system. This vitamin is also involved in the metabolism of other vitamins such as B3, B6, B9, and B12 [2].

The main dietary sources of this vitamin include [1]:

Vitamin B2 is also available in supplements for people concerned with their dietary B2 intake or who take it to reduce migraines, prevent cataracts, or maintain healthy skin, hair, and nails, among others.

Methylenetetrahydrofolate reductase (MTHFR) is a key regulator of homocysteine (and folate) metabolism. Mutations in the gene that encodes this enzyme cause high blood homocysteine levels (hyperhomocysteinemia), which greatly increases the risk of heart disease by damaging the blood vessels and promoting their hardening and clogging [3, 4].

Because riboflavin is required as a cofactor for MTHFR function, deficiency in this vitamin greatly increases blood homocysteine levels. Supplementation with riboflavin is frequently used to lower blood homocysteine levels in people with a deficiency in this vitamin or with the underactive MTHFR variant (677TT), thus reducing the risk of heart disease [5, 6, 7].

Increased dietary consumption of riboflavin has been associated with a significant decrease in age-related cataracts and lens opacity in several studies [8, 9, 10].

Corneal ectasia is the progressive thinning of the cornea, often as an adverse effect of laser eye surgery. The combination of riboflavin with UVA radiation (corneal cross-linking) triggers a reaction that strengthens the cornea by producing thicker collagen fibers. Multiple studies with follow-up periods of up to 6 years have shown disease stabilization and improvement with this procedure [11, 12, 13, 14, 15, 16, 17, 18, 19, 20].

Corneal cross-linking was also beneficial to patients with eye inflammation [21, 22].

Taken together, the evidence suggests that riboflavin helps prevent cataracts and its use combined with UVA radiation helps stop the progression of corneal ectasia and improve eye inflammation. You may discuss with your doctor if any of these strategies may be beneficial in your case.

Although the exact mechanism remains unclear, some scientists believe that mitochondrial defects in people with migraines disturb energy metabolism in the brain. This possibly increases the excitability of brain cells and renders them hyperresponsive to migraine triggers [23].

Riboflavin has been suggested to reverse these mitochondrial defects. Three studies on over 100 adults showed that riboflavin supplementation helped prevent migraine attacks. Its combination with ubiquinone and magnesium was similarly effective in another trial on130 people [24, 25, 26, 27].

Based on the available evidence, 2 meta-analyses concluded that supplementation with vitamin B2 is a safe, inexpensive, and effective way to prevent migraine attacks in adults, but not in children [30, 31].

The evidence suggests that riboflavin helps prevent migraines in adults but not in children. You may use riboflavin supplements as an add-on to your treatment regime if your doctor recommends it.

Riboflavin activated by UV radiation damages the DNA and RNA of viruses, bacteria, and parasites and reduces their growth and survival. This technology can be applied to donated blood to prevent the transmission of infections with blood transfusions [32].

Treatment of whole blood with this technology reduced the infectivity of several:

In a clinical trial on over 200 people receiving blood transfusions, this technology reduced the incidence of transfusion-transmitted malaria [41].

In another trial on 70 children with severe conditions that required frequent transfusions, this technology didn’t increase the frequency of adverse reactions and excessive immune response [42].

All in all, this technology seems effective at killing blood-borne pathogens while preserving the viability and function of blood cells.

In a study on 98 female nurses, marginal riboflavin deficiency was associated with depression [48].

In another study on over 6,500 adolescents, vitamin B2 intake was associated with a reduced incidence of depression, but only in girls [49].

In a clinical trial on 14 elderly, depressed people, supplementation with B vitamins (B1, B2, and B6) as an add-on to tricyclic antidepressant treatment improved depressive symptoms and cognitive function [50].

In another trial on 29 young healthy adults, supplementation with 10x the recommended daily dose of 9 vitamins for 1 year improved mood. The improvement was especially associated with increased blood levels of riboflavin and vitamin B6 [51].

In a study on 865 pregnant women, the consumption of riboflavin during the third quartile was associated with a reduced incidence of postpartum depression [52].

Taken together, the evidence suggests that riboflavin helps prevent depression, especially in women. You may discuss with your doctor if supplementing with riboflavin may be helpful in your case. Importantly, never use it as a replacement for proven therapies prescribed by your doctor.

In a study of people with hyperhomocysteinemia (MTHFR C677T “AA” genotype), those who had the lowest intake of riboflavin had a 1.8-2.6X increased incidence of fractures. Similarly, another study on over 1,200 women found that those with this genotype and low bone mineral density could increase it by eating more vitamin B2 [53, 54].

In another study on over 5,300 elderly people, high dietary vitamin B2 was associated with increased bone mineral density in the neck [55].

Although a bit limited, the evidence suggests that riboflavin supplementation may help prevent bone loss in risk populations. If this is your case, you may discuss this complementary approach with your doctor.

Dietary vitamin B2 intake was associated with improved cognitive test scores in a study on 554 primary school children in rural Kenya [58].

In another study on 137 elderly people, high vitamin B2 intake was associated with improved abstract performance [59].

Although the results are promising, the evidence is insufficient to support the use of riboflavin to enhance cognitive function. Further clinical research is required.

Riboflavin consumption (in addition to vitamin B6) was associated with a reduced incidence of colorectal cancer in a study on over 88,000 postmenopausal women [60].

Another study on over 6,500 people found that high vitamin B6 was associated with reduced incidence of proximal colon cancer but increased rectal cancer in women [61].

A meta-analysis of 10 studies and over 12,000 women found that vitamin B2 intake was only weakly associated with a reduced risk of breast cancer [62].

In a study on almost 15,000 men, there was no association between vitamin B2 intake and prostate cancer incidence or death rate [66].

In a study of 21 esophageal cancer cases from two Iranian regions with low and high cancer risk, the daily vitamin B2 intake of all the cases was below the average [67].

All in all, the evidence is mixed and mainly suggests that vitamin B2 intake has little or no effect on cancer development. More research is needed to draw firm conclusions.

Vitamin B2 (along with other B vitamins) helped reduce the length, pain intensity, and frequency of nocturnal leg cramps in a clinical trial on 28 elderly people [68].

No clinical evidence supports the use of riboflavin for any of the conditions listed in this section. Below is a summary of the existing animal and cell-based research, which should guide further investigational efforts. However, the studies should not be interpreted as supportive of any health benefit.

Riboflavin significantly reduced the expression of HMGB1 (high-mobility group protein B1), which is one of the factors responsible for inflammation in systemic inflammatory response syndrome (sepsis), in mice [69].

In mice, vitamin B2 supplementation increased iron and zinc uptake, rate of conception, weight gain during pregnancy, weight of the pups, and percentage of hemoglobin [71].

In mice with multiple sclerosis, supplementary riboflavin helped suppress the neurological disability symptoms of this condition [74].

However, riboflavin supplementation failed to improve the disability status of multiple sclerosis in a clinical trial on 29 people [75].

The FDA has established the following recommended dietary allowances (RDA) of vitamin B2 [76]:

Vitamin B2 deficiency is extremely rare in healthy, non-malnourished people. Large studies found it affected 0% of children aged 2-8 years old, 5% of girls aged 14-18, and 2% of adults [77].

Vitamin B2 is more common in people with digestive and absorptive disorders, who have undergone bowel resection, are malnourished, or affected by rare genetic syndromes (such as Brown-Vialetto-Van Laere and Fazio-Londe) [1].

Other causes of deficiency include hormone disorders (aldosterone and thyroid hormone insufficiency), therapy with some drugs (such as tricyclic antidepressants and tetracyclic antibiotics), and alcohol abuse [1].

However, because vitamin B2 deficiency is almost invariably associated with low levels of other vitamins, many of these signs are actually caused by other deficiencies [1].

If you experience several of these symptoms, consult your doctor to establish the underlying cause and develop an appropriate plan to improve your health.

Riboflavin is likely safe when taken with food or at normal supplement doses. In some people, it can cause the urine to turn yellow-orange in color. When taken in high amounts it may cause diarrhea and increased urine [1].

Taking high doses (over 100 mg) repeatedly can cause the buildup of a toxic byproduct that is formed when riboflavin reacts with light (tryptophan-riboflavin). This compound causes oxidative damage and is especially toxic to the liver and the retina [1].

A 15-year-old boy developed a severe allergic reaction (anaphylaxis) from a dietary supplement with riboflavin [81].

19 Potential Benefits of Glutathione + Side Effects