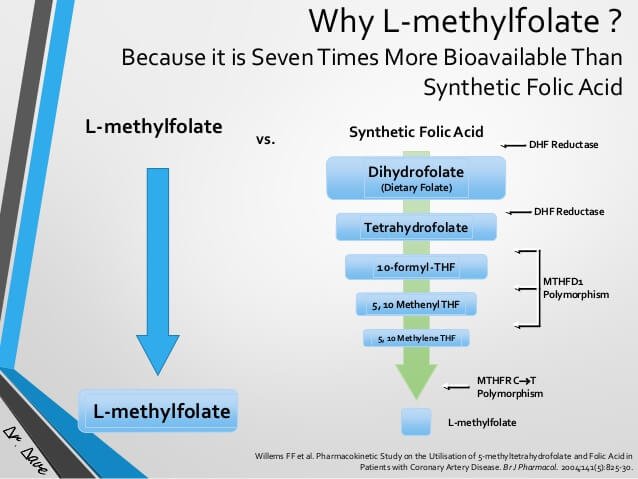 The MTHFR gene is very important for DNA production & many bodily functions. Read on to discover the science behind MTHFR and folate metabolism, plus how to check your SNPs.

The MTHFR gene codes for an enzyme known as methylenetetrahydrofolate reductase or MTHFR. This enzyme is responsible for converting 5, 10-methylene THF to 5-methyl THF, which is essential for the conversion of the amino acid homocysteine to methionine [1, 2].

This enzyme is very important for the production of DNA and methylation pathways that are essential for all bodily functions [2].

MTHFR also plays a central role in the transformation of folate to S-adenosylmethionine (SAM), the universal methyl donor in cells and affects DNA methylation status.

To learn more about methylation in general, check out this post.

Genetic variations in the MTHFR gene results in reduced activity of the enzyme produced and have been associated with a series of diseases and conditions, including cardiovascular disorders, neurological defects, some forms of cancer, psychiatric disorders, diabetes, and pregnancy complications [3, 4].

The two most common MTHFR mutations (polymorphisms) found in humans are:

The enzymatic activity of MTHFR in people with one minor allele in each MTHFR C677T and A1298C polymorphisms is lower than the activity present if only one SNP had a single minor allele [6].

Reduced MTHFR enzyme activity results in a decreased conversion of the amino acid homocysteine to methionine and accumulation of homocysteine in the blood. Abnormally elevated homocysteine levels are referred to as “homocystinuria” or “hyperhomocysteinemia” (Hhcy) [4].

The elevation of homocysteine levels in the blood may increase susceptibility to a number of health conditions [3, 4].

A series of studies have linked MTHFR polymorphisms, especially the C677T, with various types of diseases, but the results are sometimes conflicting and controversial. This controversy may be attributed to small sample sizes and ethnic factors that impact on the presentation of diseases in different populations around the world [2].

The various diseases that have been associated with MTHFR polymorphisms, especially C677T, are briefly presented below.

An association between a given genotype and a condition or disease doesn’t necessarily mean that genotype causes that disease. That being said, the A allele at the C677T polymorphism has been associated with many health conditions, including:

Again, it’s important to take these associations with a grain of salt until more robust studies investigate them further. If you have a genotype linked to low MTHFR activity and you’re concerned about any particular health condition, your doctor can help you develop an appropriate strategy for prevention.

If your tests show high homocysteine, your doctor will likely advise you on an appropriate diet and supplement regimen. This plan is likely to include an increased intake of folate, vitamin B12 (cobalamin) and vitamin B6 (pyridoxal phosphate), which have been found to affect the levels of homocysteine in the blood [4].

The healthy control group had homocysteine under 7 μmol/l, whereas those with schizophrenia averaged 12 μmol/l [67].

MTHFR is an enzyme which affects the methylation of all cells. Methylation is important for various biochemical conversions which determine the expression of your genes [2].

Check the SNPs out on SelfDecode:

It has recently been shown that the human gut can convert the folates from food sources to 5-MTHF (the type of folate that our body can use) very efficiently. However, its ability to convert supplemented folate is limited [71].

Reduced folate ((6S) 5-MTHF) is the bioavailable form of folate which is easily absorbed and metabolized in the human body. It is available as a supplement, usually labeled as methylfolate or L-methyltetrahydrofolate [72, 73, 74].

Additionally, you can supplement with methyl-vitamin B12 (methylcobalamin), the bioavailable form of vitamin B12, instead of the usual vitamin B12. This will make access to vitamin B12 for your body easier.

If you are homozygous for both of the best-known MTHFR mutations (rs1801133 “AA” and rs1801131 “GG”), we strongly recommend talking to a doctor about supplementation and other options.

Folate is an important micronutrient in DNA synthesis, integrity, and stability. If you have alleles that reduce the activity of MTHFR, we recommend looking for the active methylfolate (or L-methyltetrahydrofolate) variety. Talk to your doctor before starting a new supplement to make sure it’s right for you.

The current recommended intake is 400 μg/day for the average adult with an increase to 600 μg/day for pregnant and lactating women [4].

Keep in mind that folate supplementation is known to mask anemia caused by insufficient levels of vitamin B12. To avoid a B12 deficiency, keep your medical professional in the loop about any supplements you choose to take [75].

Learn more about your genes

Upload your DNA for free to SelfDecode.

SOD2 Genes, SNPs & Factors that May Increase/Decrease It