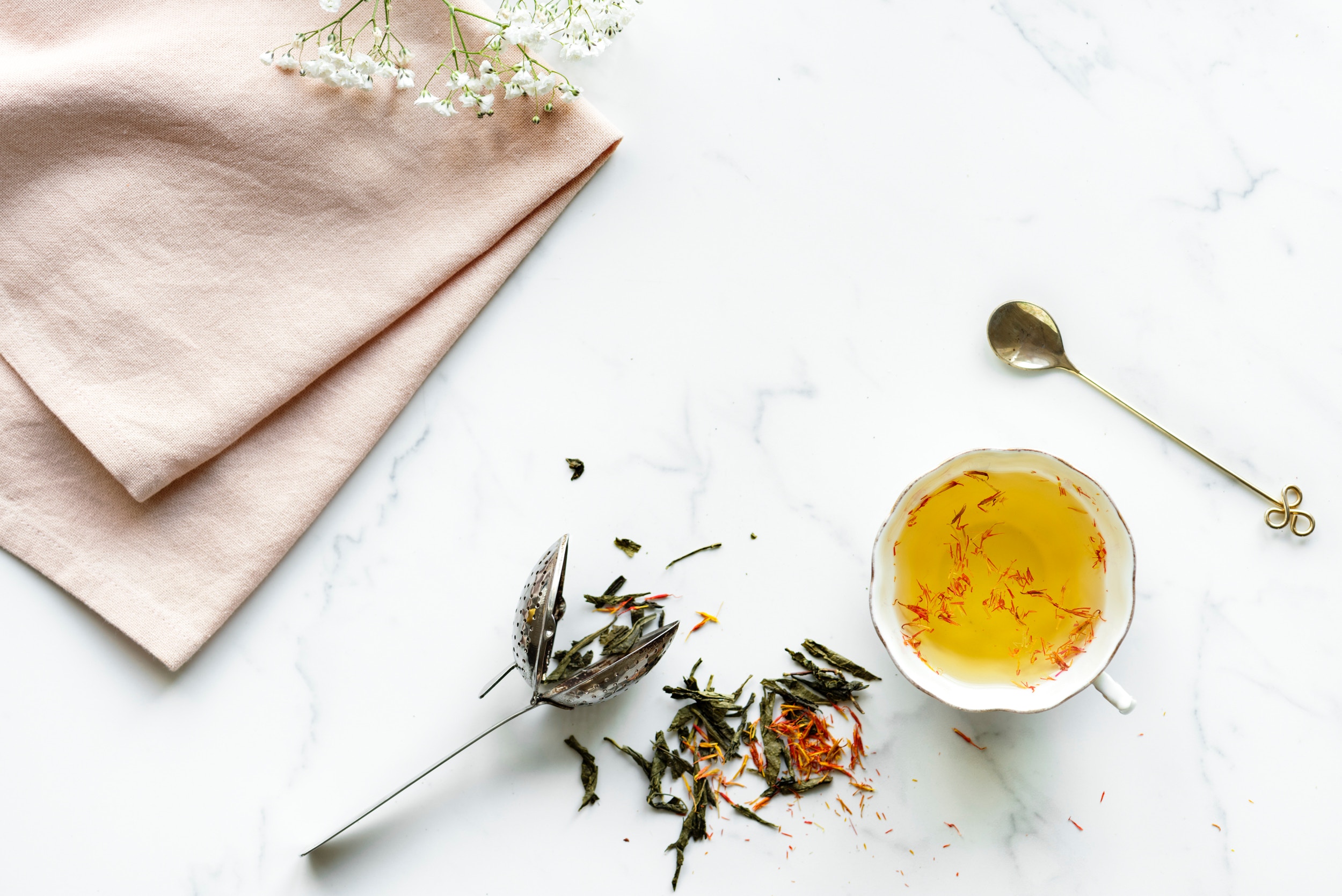 People have long used saffron or the ”golden spice” to season food and color simple dishes bright yellow. Saffron tea is refreshing, healthy, intense, and easy to make. Science supports its use for low mood, cognitive problems, eye health, and PMS but casts doubt on other traditional uses. Read on to discover what saffron tea is good for (recipe included)!

What is Saffron Tea?

Saffron, also known as Za’faran, is a spice collected from the Crocus sativus plant. Alluding to its yellow color and high cost, saffron is often referred to as the “Golden Spice.” It has been used as a seasoning in food and as a coloring agent for over 4 millennia [1].

The Crocus sativus flower consists of thread-like, crimson-colored structures known as stigmas. The stigmas are collected and dried, resulting in the saffron spice [1].

The popularity of saffron has spread from the Middle East across the globe. Some people stick to using saffron as a culinary spice, while others opt-in for supplements.

But a handful of people want to enjoy the refreshing and strong taste of carefully prepared saffron tea. This article is for you!

Saffron tea is an infusion made with the saffron spice (dried saffron stigmas) and boiling water. Various herbs are also usually added to balance its taste, along with honey, coconut milk, or whatever suits your taste buds. As long as you get real saffron, you can’t go wrong.

So let’s take a look at what saffron tea might be good for, how to make sure you’re getting high-quality saffron (instead of a cheaper plant substitute like safflower or cornsilk), and how to prepare delicious saffron tea!

Historically, saffron was used in traditional medicine  as a remedy for a variety of ailments including:

In modern medicine, saffron has gained popularity for its wide range of therapeutic applications, including but not limited to [1, 2]:

However, only a few high-quality, large-scale clinical trials of saffron have been carried out. Most of its modern uses still lack proper evidence.

The chemical signature of saffron is complex: scientists have discovered over 150 compounds in this spice. The most significant to its potential benefits, taste, and smell are crocin, picrocrocin, and safranal [3, 1].

Active components in saffron may vary depending on where it was grown and how it was collected. Therefore, the health benefits observed may differ depending on the quality of the plant and the amount used [4].

Additionally, saffron has not been approved by the FDA for medical use. Speak with your doctor before drinking large amounts of saffron tea.

People traditionally used saffron for many health problems–from asthma to stress to congestion to low mood and more. Science supports only a handful of these uses.

What is Saffron Tea Good For?

Herbal teas, in general, are lower and more variable in their active ingredients than standardized extracts. Thus, their health benefits are likely weaker.

On the other hand, herbal tea is often more affordable, it’s easy to make, and side effects are less likely.

With this in mind, here are 5 potential health benefits of saffron tea, based on the highest available level of evidence.

Scientists think that one way in which saffron extract may support mental health is by increasing levels of dopamine and norepinephrine [1].

In a meta-analysis of five clinical trials (including over 150 people in total), saffron improved the symptoms of depression. Its effectiveness seemed to be comparable to that of standard antidepressants [5].

In 40 women with mild-to-moderate postpartum depression (after childbirth), 6 weeks of saffron supplements were more effective than the common antidepressant Prozac [6].

Similar improvements in depressive symptoms were seen in 61 patients with schizophrenia given saffron extract for 12 weeks in one low-quality study. In another study of people with schizophrenia, high saffron doses were well tolerated. One study showed that crocin, the active compound in saffron, might also reduce the metabolic side effects of antipsychotics [7, 3].

Saffron was safe to use in the above-mentioned studies, but more research is needed to determine how effective it is, especially when used as a tea.

Saffron extract seems to improve symptoms of major depression and postpartum depression, but whether saffron tea can achieve the same is uncertain.

Saffron extract improved cognitive function and reduced dementia in a study of 46 patients with Alzheimer’s disease after 16 weeks [8].

According to test-tube experiments, saffron may improve cognition by inhibiting an enzyme that breaks down acetylcholine: acetylcholinesterase. This enzyme is a target of donepezil, one of the approved medications for Alzheimer’s [9].

In a 22-week study of 54 patients, saffron was as effective as donepezil for Alzheimer’s disease while having fewer digestive side effects [10].

Scientists are also investigating whether crocin, the active ingredient of saffron, can inhibit the build-up of amyloid-beta proteins, a hallmark of Alzheimer’s disease [11, 12].

Active compounds in saffron may boost memory by raising acetylcholine, which makes them promising nutraceuticals for further Alzheimer’s research.
Get the Regimen of A Top Biohacker Preparing His Body to Fight Coronavirus

Two older trials of 58 AMD patients revealed similar effects of saffron, but one of them lacked a placebo control [14, 15].

Saffron extract supplementation was able to improve vision and blood flow to the eyes in animals with this condition. This effect is likely mediated by crocin, which dilates the vessels carrying blood to the eyes [16].

One of the oldest traditional uses of saffron is to soothe premenstrual syndrome or PMS. The symptoms of PMS include mood swings, cramps, bloating, and acne [17].

In a group of 35 women, exposure to the odor of saffron for 20 minutes significantly reduced symptoms of PMS and improved irregular periods. This effect occurred through a reduction of the stress hormone, cortisol [18].

In 180 younger women, an herbal product with saffron, celery seed, and anise extracts (1,500 mg/day for 3 days) significantly reduced the severity and duration of menstrual cramps [19].

According to small studies, saffron might help with PMS, irregular periods, and cramps. More research is needed.

A few caveats limit the reliability of the existing saffron studies:

How to Spot Fake Saffron

Due to the high price of saffron, vendors often sell adulterated versions of this spice.

If you want to make high-quality tea, you need to know how to spot fake saffron.

Adulteration can range from substituting a completely different plant such as safflower (Carthamus tinctorius) or marigold flowers to adding dyes or plant pigments (like turmeric) to recover the color of already used saffron [4].

It is not uncommon to see other parts of the Crocus sativus plant used in place of the stigmas (the part that constitutes the saffron spice) [4].

Some mix real saffron with fake saffron, which makes it even harder to spot the difference.

A practical way to tell the difference is to look closely at the threads. Are they trumpet-shaped? If not, it’s not saffron! Saffron stigmas should maintain a trumpet shape: it looks like three vivid threads that join together at the bottom.

Next clue: taste and smell. Saffron shouldn’t taste sweet. Real saffron should be bitter and slightly astringent when you place it on the tongue. It should also have a distinctly sweet and strong aroma, but this can be hard to identify if you’ve never smelled real saffron for certainty. However, if you don’t smell anything, it’s probably fake.

So remember: if it tastes sweet but doesn’t smell sweet, you are likely dealing with fake saffron.

Another red flag is the price. If it’s too good to be true, it’s likely fake. For example, fake saffron is sometimes sold as cheap as $45 per ounce. Real saffron tends to be around $150 per ounce.

Lastly, pay attention to the color. Real saffron should be red when dry, the moment you place it in water, and once you take it out of water. It should color the water a yellowish-golden hue. Fake saffron is usually colored over with various pigments and it’ll lose its color once you take it out of water–but it’ll probably color the water orange-red.

Therefore, pay close attention when purchasing saffron. Look to get this spice from known, reliable sources.

How to Make Saffron Tea (Recipe)

If you managed to get your hands on real saffron, the next part is easy.

Here is how to make saffron tea step by step:

Have in mind that saffron tea is not safe for everyone. Make sure to read more about the side effects and safety of saffron here.

Saffron has long been used as a culinary and medicinal spice in the Middle East. However, its high price and demand have also created a whole array of fake products.

The most important step to making healthy saffron tea is to purchase real saffron. Check for reputable manufacturers and pay close attention to color, taste, smell, and price.

You can make saffron tea by steeping saffron threads in boiling water, mixed together with other aromatic herbs. Real saffron has a strong and bitter taste. Research suggests that saffron may help boost mood and cognition, support eye health, and soothe PMS and menstrual cramps.