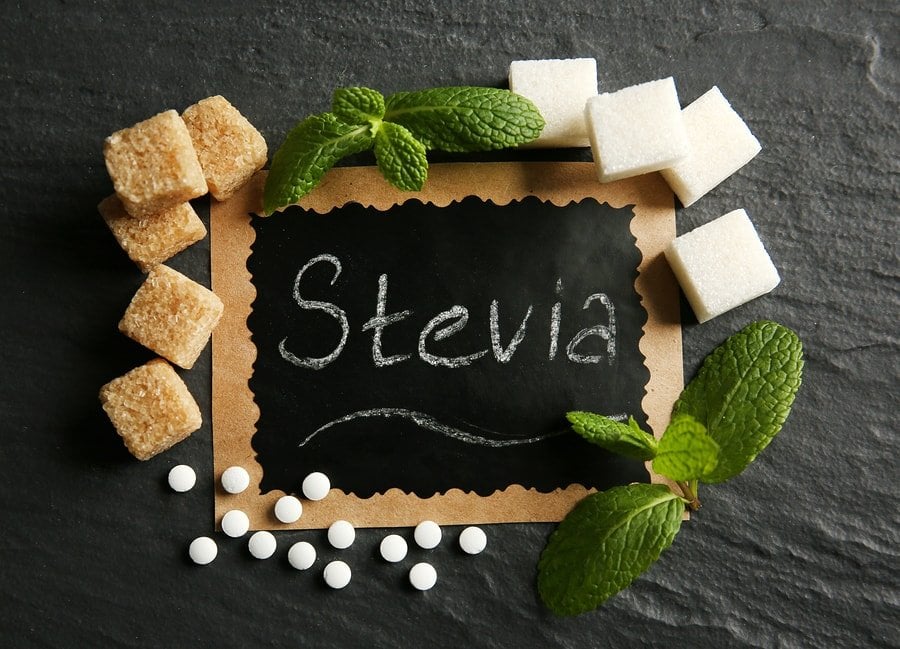 Stevia is a naturally occurring low-calorie sweetener. It may reduce high blood pressure and sugar levels, but the clinical evidence is limited. Scientists have also been researching its potential to protect the liver, kidneys, and more. Read on to learn the potential benefits, dosage, and safety of stevia and steviol glycosides.

Stevia was originally called Eupatorium rebaudiana bertoni in honor of Rebaudi, who was the first chemist to study the chemical characteristics of the plant’s extracts [1].

It was first used as a sweetener in herbal fusions by the Guarani people of South America, but Japan was the first country to market steviol glycosides in the food and drug industry.

Now, cultivation of the plant has expanded to other Asian regions like China, Malaysia, Singapore, South Korea, Taiwan, and Thailand. The plant is a long-lasting shrub that is over 100 to 300 times sweeter than table sugar and has no calories [2, 3].

Indigenous people of South America, particularly in Paraguay and Brazil, have used stevia as a sweetener for hundreds of years. For example, the Gurani Indians of Paraguay have an age-old practice of using stevia to sweeten their Yerba Mate tea.

Stevia was first noticed by the outside world in the sixteenth century when Spaniards discovered the widespread use of stevia in South America.

In recent years, a growing need to find new, naturally sweet, calorie-free alternatives to sugar has led to greater interest in the “sweet herb” from nutritional researchers and commerce [4].

The best known natural products derived from stevia rebaudiana are glycosides such as stevioside (9.1%), rebaudioside A (3.8%), rebaudioside C (0.6%), steviolbioside (a.k.a. steviol), dihydroisosteviol (a.k.a. isosteviol), rubusoside, and dulcoside (0.3%).

In a meta-analysis of nine studies and 756 participants, steviol glycosides caused a considerable decrease in diastolic (lower) but not systolic (higher) blood pressure. The results were most effective when observed over a long period of time [5].

On the other hand, they had no beneficial effects on high blood pressure patients in another trial [6].

Further research is needed to support the potential blood pressure-lowering effects of stevia and its components.

No valid clinical evidence supports the use of stevia for any of the conditions in this section. Below is a summary of up-to-date animal studies, cell-based research, or low-quality clinical trials which should spark further investigation. However, you shouldn’t interpret them as supportive of any health benefit.

A study of 19 volunteers found that post-meal blood sugar levels were lower in stevia consumers than sucrose or aspartame consumers [9].

In a preliminary trial of 12 diabetes patients, steviol glycosides caused a significantly lower increase in blood glucose compared with a control. However, the researchers used corn starch as a control, which has a significant impact on blood sugar levels [10].

Another clinical study failed to confirm the benefits of steviol glycosides for both type 1 and type 2 diabetes patients. More studies are needed to clarify the conflicting evidence [13].

No clinical evidence supports the use of stevia for any of the conditions listed in this section. Below is a summary of the existing animal and cell-based research, which should guide further investigational efforts. However, the studies listed below should not be interpreted as supportive of any health benefit.

Atherosclerosis is also known as hardening of the arteries.

Stevioside is able to reduce the occurrence of hardening of the arteries through multiple mechanisms.

It has the ability to inhibit the hardening of the arteries by reducing macrophages, oxidized low-density lipoprotein (ox-LDL), and fats. This reduces plaque.

In test tubes, stevia has an inhibitory effect against non-human rotavirus infection [15].

Steviol, stevioside, and isosteviol were found to inhibit the formation of skin tumors in mice [17, 18].

In one study, mice treated with stevioside had a lower incidence of benign tumors (adenomas) in the breast. However, these changes are linked to the reduction in body weight due to caloric restriction [19].

However, we can’t make any assumptions in the lack of clinical trials. So far, stevia and its compounds can’t be recommended for cancer prevention or treatment.

In a study on mice, stevioside reduced lung damage caused by lipopolysaccharides by decreasing the wet-to-dry ratio in the lungs, pro-inflammatory cytokine production, and inflammatory cell migration into the lungs [21].

Stevioside, rebaudioside A, and steviol has an effect on the metabolic pathways that involve high-fat levels (lipotoxicity) such as deterioration (steatosis), hepatitis, and liver disease (steatohepatitis).

Obese and insulin-resistant mice were treated with stevioside, rebaudioside A, and steviol, and the results exhibited a significant decrease in liver steatosis levels [22].

According to one study in diabetic rats, stevia leaves could reduce the risk of oxidative stress and thus reduce kidney damage [23].

In another study, Stevia leaves were more effective than I-NNA (N-nitro-L-arginine) in managing diabetes-induced kidney disorders in rats [24].

Based on the published research, independent scientific experts in both the U.S and globally have concluded that stevia sweeteners are safe for people of all ages, and an acceptable daily intake (ADI) of 4mg/kg body weight has been established [25].

The natural, whole stevia leaf has mostly been shown to be non-toxic and safe. Studies indicate that stevioside, the primary chemical that gives stevia its sweetness, cannot cause cellular changes or affect fertility [26, 27].

However, there was one study on male rats that found that consumption of a water extract of the stevia leaf lowered testosterone levels and sperm count. This result seems to be anomalous and probably due to the high levels of stevia used in the study [28].

While stevia has recently become widely used in many countries without indications of toxicity surfacing, its safety is still not adequately tested. This may explain why the FDA has not yet approved crude or whole-leaf stevia as a safe food additive.

People with bronchial asthma, atopic eczema, or an allergy to plants in the Compositae or Asteraceae families – such as chrysanthemums, marigolds, ragweed or daisies – are more likely to be allergic to stevia.

Possible symptoms include swelling and itching of the oral area, hives, GI pain, nausea, and vomiting.