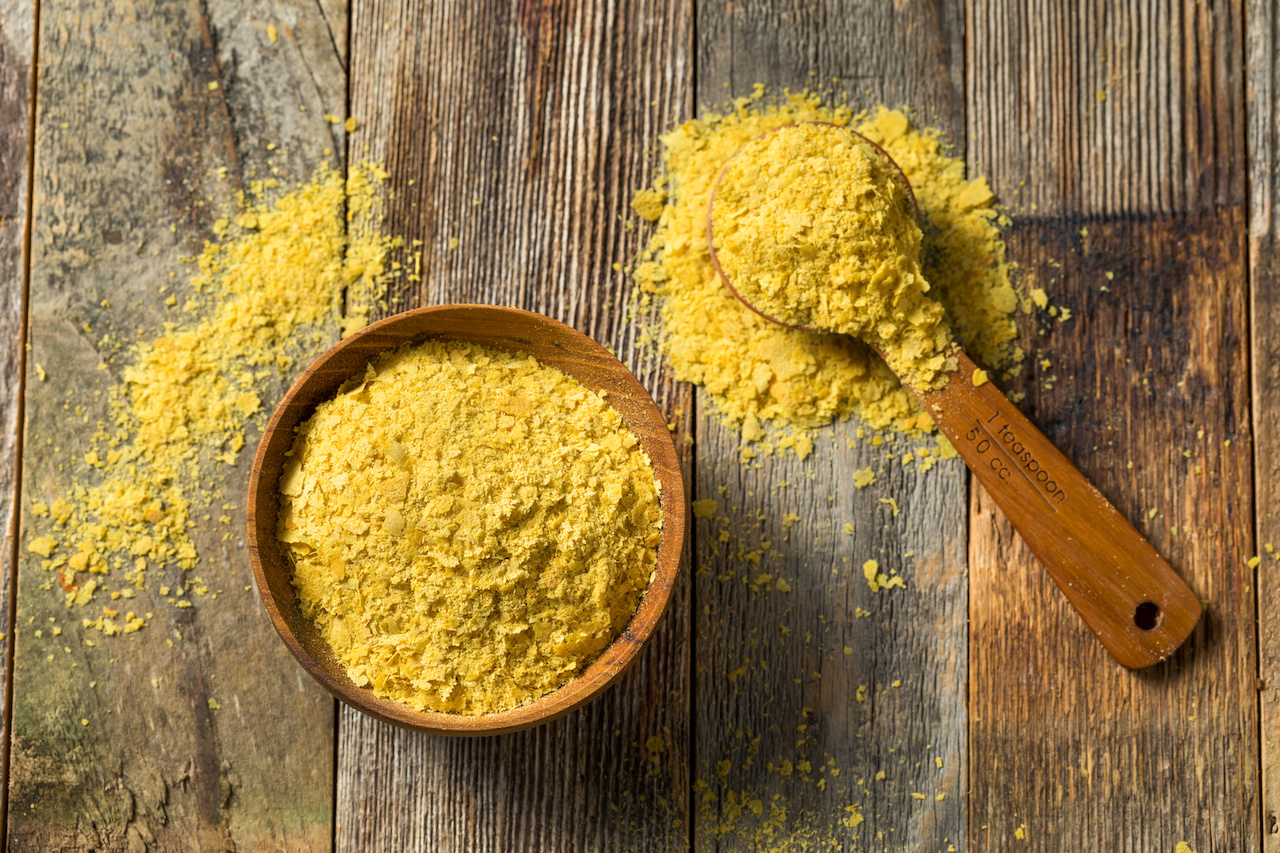 This delicious cooking ingredient is loaded with essential nutrients and gut-friendly fiber. It can support your immune system and rev up your energy, but it’s not for everyone. Read on to learn the pros and cons of nutritional yeast, how to choose the right product, and how to get the most out of it.

What Is Nutritional Yeast?

Nutritional yeast, also known as nooch or “hippie dust,” is a single-cell fungus with incredible nutritional value. It’s made from Saccharomyces cerevisiae, a type of yeast used in brewing and baking [1].

Manufacturers grow S. cerevisiae, deactivate it using heat, and dry it to get the final product. They can select and culture specific strains of yeast for desired nutritional value and properties [2].

Nutritional yeast is a popular cooking ingredient, especially in vegan dishes as a cheese substitute. People also use it to boost their immunity, energy levels, and intake of essential nutrients [3].

Nutritional and brewer’s yeast are close relatives: they both contain S. cerevisiae, but they slightly differ in the production process, nutritional value, and uses.

Brewer’s yeast is a byproduct of the beer brewing industry, usually grown on hops or grains. People use its dried and deactivated form as a nutritional supplement. Depending on the growth medium, brewer’s yeast may contain gluten [4].

The food industry grows nutritional yeast for its dietary uses only. The growth medium is glucose or molasses, which makes the final product gluten-free [2].

Brewer’s yeast has a bitter taste that many find unpleasant; nutritional yeast has a nutty or cheesy flavor and blends well into various dishes.

Brewer’s yeast may be more suitable for diabetics, but it has a bitter taste and may contain gluten. Nutritional yeast is usually fortified with vitamin B12, has no gluten, and tastes much better.

Nutritional yeast didn’t get its name by chance— it delivers a blast of high-quality protein, fiber, B vitamins, and minerals. Plus, it has only 60 calories (kcal) per serving with no sugar and cholesterol (Table 1) [6, 7].

There are two types of nutritional yeast: fortified and unfortified. Fortified products usually contain added vitamin B12, folate, and other B vitamins [2, 6]:

*Depends on the manufacturer (fortification)

Many vegans use nutritional yeast to supplement their diets with vitamin B12. However, yeasts don’t naturally contain this vitamin [8, 9].

They produce a so-called pseudo-vitamin B12, which does not have biological activity in humans. It can compete with other forms of “active” B12 and potentially worsen B12 deficiency [10].

Keep in mind, however, that nutritional yeast can’t treat vitamin B12 or any other nutritional deficiency.

Fortified yeast contains synthetic forms of folate, some of which may not be suitable for people with MTHFR mutations that prevent folate activation (more details below) [15].

These nutrients support your gut health and the immune system, and they contribute to a range of nutritional yeast benefits discussed below [19, 20, 21].

Based on the growing method and conditions, nutritional yeast may also contain [22, 23, 24]:

Nutritional yeast is rich in protein, minerals, B vitamins, and prebiotics. It also contains immunity-boosting beta-glucans. Fortified products usually have vitamin B12 and folate added.

Heart disease is the leading cause of death worldwide, with high blood pressure and cholesterol as major risk factors [25].

Nutritional yeast is packed with cholesterol-lowering components, such as:

That said, the above studies didn’t have placebo controls and used chromium-rich brewer’s yeast. It’s not sure whether nutritional yeast without chromium would produce the same effects.

B-glucans from S. cerevisiae cut cholesterol levels in 15 obese men and caused no side effects. Studies on rats and mice also suggest their cholesterol-lowering potential [33, 34, 26].

Components of nutritional yeast that may help reduce blood pressure include:

Prebiotics (beta-glucans and mannan-oligosaccharides) and cell wall components from S. cerevisiae can support the gut microbiome and help with a range of digestive issues [40, 41, 42, 43].

In animal studies and test tubes, scientists observed the potential of these components to shield the gut by:

That said, nutritional yeast contains inactive cells and thus lacks probiotic effects such as increased nutrient absorption and additional microbiome benefits. These are limited to supplements with active, live strains of S. cerevisiae or S. boulardii [53, 54, 55, 56, 57, 58].

Gut health is the cornerstone of robust immunity. By nurturing the gut and shielding it against pathogens, nutritional yeast (S. cerevisiae) can strengthen the immune system [50, 51, 59].

Two main carbs from nutritional yeast, alpha-mannan and beta-glucan, have immune-boosting properties. They bind to and stimulate the immune cells, making them more efficient against various infections and diseases [60].

In two studies of over 200 participants, a supplement with S. cerevisiae and its products (EpiCor) lowered the risk of catching a cold and reduced symptoms in those who became ill [61, 62].

The same treatment relieved the symptoms of hay fever in 96 individuals [63].

Truth be told, the above studies on EpiCor were funded by a company that owns this supplement, which indicates a massive conflict of interest.

Yeast beta-glucans also showed immune-boosting properties in clinical trials and animal models. They were able to [64, 65, 66, 67]:

Nutritional yeast is rich in zinc, another nutrient that supports the immune system [68].

Many athletes and active people use nutritional yeast as a natural energy booster. It’s loaded with nutrients that support a healthy mood and energy production.

Patients with chronic fatigue syndrome are often deficient in B vitamins and other nutrients. Products based on S. cerevisiae may improve their nutritional status, enhance cognitive function and mood, and reduce other symptoms [69, 70, 71].

Nutritional yeast contains an array of nutrients that support mood and energy, but the available clinical evidence is limited.

Brewer’s yeast is naturally high in chromium, which is partly responsible for these beneficial effects. Chromium-enriched nutritional yeast was able to lower blood glucose by boosting insulin function in animal trials [5, 23, 79].

Nutritional yeast may or may not contain chromium, so make sure to check nutritional labels.

Beta-glucans may also improve lipid and glucose metabolism in patients with diabetes [64].

Researchers observed the ability of yeast hydrolysate to reduce body fat in animal studies, too [82, 83, 30].

Although yeast hydrolysate and nutritional yeast both contain S. cerevisiae, they are produced differently may not have the same effects on weight loss.

Additionally, high amounts of B vitamins may increase your appetite and the risk of weight gain. If you are struggling to shed extra pounds, nutritional yeast may not be the best option [84].

Some components from nutritional yeast may support fat burning, but high amounts of B vitamins can increase appetite and the risk of weight gain.

Nutritional yeast is high in zinc, a mineral that boosts fertility in men [85, 86].

Selenium-enriched yeast may enhance thyroid function and help with autoimmune thyroid disorders such as Hashimoto’s and Grave’s disease [22, 87, 88, 89, 90].

While some nutritional yeast products are rich in these components, no studies have investigated whether they have the above benefits.

The potential of S. cerevisiae to bind fungal toxins is a double-edged sword. Out of 46 analyzed yeast supplements, almost 90% were contaminated with ochratoxin A, which can damage your kidneys [94, 95].

The above study tested brewer’s yeast supplements, but the same threat exists for nutritional yeast, as they both contain inactive S. cerevisiae. To avoid contaminated yeast, make sure to choose lab-tested products from reputable brands.

People allergic to yeasts and molds should skip nutritional yeast. Those with atopic dermatitis (a type of eczema) may also be intolerant to yeasts [96, 97, 98, 99].

If you have kidney stones or gout, avoid all yeasts. They are high in uric acid and its precursor, purine, which may worsen your condition. Try to limit your intake of yeast-fermented products such as beer, bread, wine, and cheese as well [100, 101].

If you suspect that you are sensitive to glutamate, you may want to avoid nutritional yeast.

People with yeast allergies, kidney stones, or gout should avoid nutritional yeast. Others should choose lab-tested products to prevent contamination with fungal toxins.

There’s public concern regarding the safety of nutritional yeast for people with candida infection.

Nutritional yeast contains inactive (killed) S. cerevisiae, which cannot cause or worsen infections. Unless you are allergic to candida and other fungi you should be fine, but it’s always a good idea to consult with your doctor first [96, 97].

On the other hand, active yeasts used for fermentation or probiotic effects may cause infections in people with candida or weakened immune system [103, 104, 105].

Nutritional yeast doesn’t contain gluten, but people with celiac disease (gluten intolerance) or Crohn’s disease may have antibodies to S. cerevisiae. Yeast-based products may worsen symptoms in such patients [106, 107].

No studies have examined the safety of S. cerevisiae in people with non-celiac gluten sensitivity.

Yeasts are also high in tyramine, which interacts with monoamine oxidase inhibitors (MAOIs), a class of drugs prescribed for depression. People on MAOIs should skip nutritional yeast and other tyramine-rich foods [109].

How to Use Nutritional Yeast

Nutritional yeast is a popular cooking ingredient. You can use it as a cheese substitute in various recipes to make a vegan-friendly dressing for:

It usually comes in flakes, but you will also find ready-to-use seasonings with nutritional yeast. Those looking to use it as a supplement may opt for tablets, but they provide much smaller amounts.

Most users praise the cheesy flavor of nutritional yeast, which blends well in countless dishes. Besides cooking, they use it to boost energy levels and the intake of essential nutrients.

Some users also give it to their pets as a nutritional supplement and flea repellent.

People have reported unpleasant “chemical” smell and taste of fortified products, which probably comes from added B vitamins.

Side effects are rare, and they include skin reactions and stomach cramps.

Nutritional yeast is packed with protein, B vitamins, minerals, and prebiotic fiber. Fortified products can contain vitamin B12, selenium, and chromium.

The evidence supports the use of nutritional yeast as a natural energy and immunity booster. It may also shield the heart, improve gut health, and help with diabetes.

Nutritional yeast isn’t suitable for people with yeast allergies, kidney stones, and gout. Some patients with gluten intolerance, eczema, and Crohn’s disease may also want to avoid it.