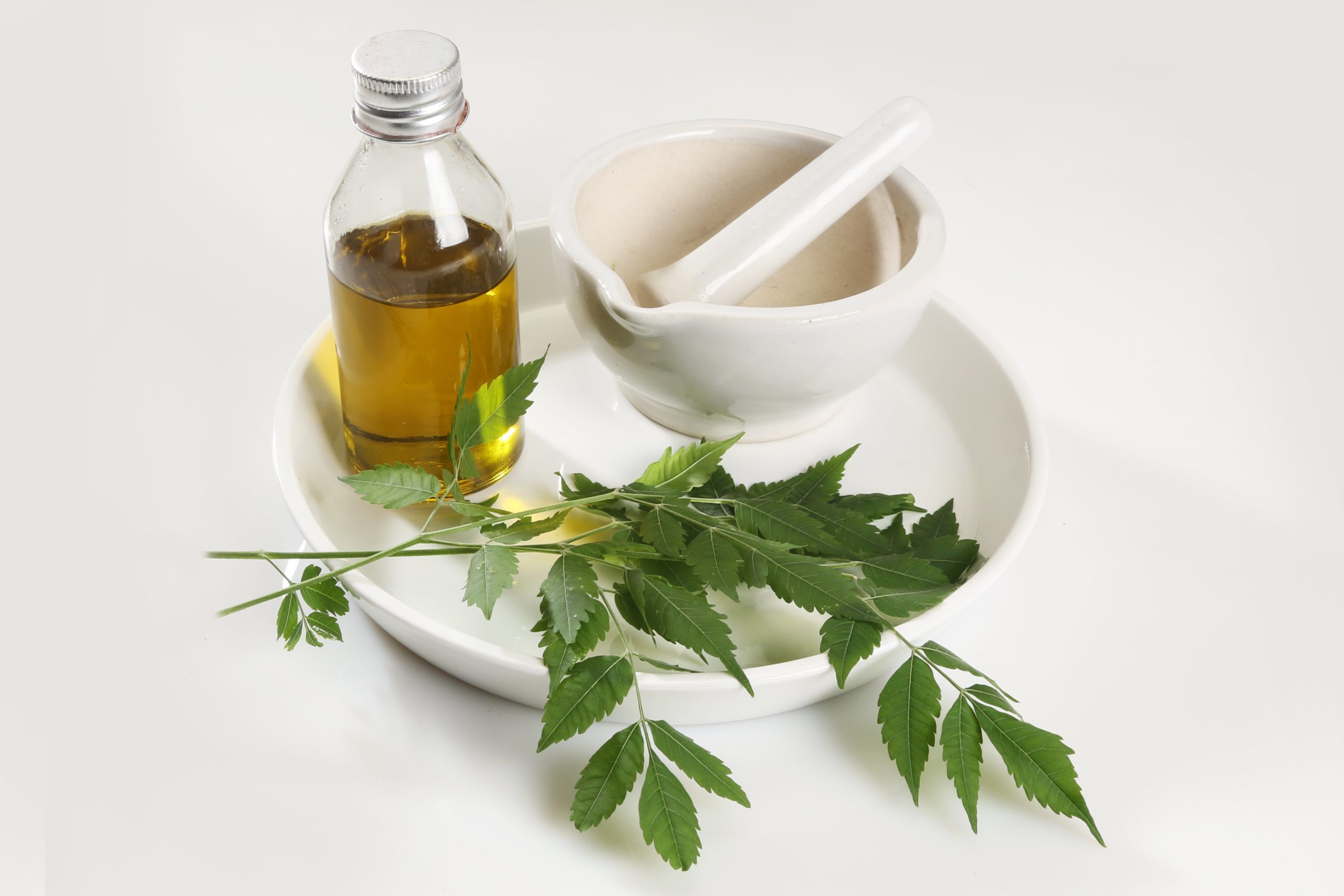 For over 4,000 years, the neem tree has been used in traditional Asian medicine. Abundant in bioactive compounds, neem is a natural antiseptic that can be used on the skin, hair, in cosmetics, on pets, and in the garden. Read on to find out whether it’s safe and how to use it.

What Is Neem Oil?

Neem (Azadirachta indica) is an evergreen tree native to India and Myanmar (Burma), though it can also be found in other parts of Asia and Africa. The tree is also known as Indian lilac [1+, 2].

The Swahili word for the tree, Mwarobaini, translates to “tree of 40”, as the tree is traditionally used to remedy 40 different diseases. In India, it’s sometimes referred to as ‘nature’s drug store’ due to its many traditional health uses [1+, 3, 4].

It’s been used in Ayurvedic medicine, a system of traditional medicine that originated in India, for over 4,000 years [5+].

Virtually every part of the tree, including the bark, seeds, leaves, flowers, and roots, have traditional medicinal uses. For example, chewing neem twigs is a common method for keeping the teeth clean in some rural Indian populations [6, 7, 8].

Neem oil usually refers to the oil obtained from neem seeds, although extracts from other parts of the tree, like the leaves, are also sometimes called ‘neem oil’. The oil has a yellow color and reportedly smells like garlic [9+, 10+].

Neem oil supplements have not been approved by the FDA for medical use. Supplements generally lack solid clinical research. Regulations set manufacturing standards for them but don’t guarantee that they’re safe or effective. Speak with your doctor before supplementing.

Neem oil is usually made from neem seeds, is yellow in color, and has a strong smell. People in rural India traditionally chew neem twigs to keep their teeth clean.

How Does Neem Oil Work?

There is insufficient evidence to support the use of neem oil for any of the below-listed uses. Remember to speak with a doctor before taking neem oil and never use it as a replacement for approved medical therapies.

Neem oil can kill bacteria and fungi cells by destroying their cell walls. This bacteria-killing ability is likely how neem oil may improve acne and dandruff. It’s also why neem can be effective in products like toothpaste [11, 12+, 13, 14].

Neem is commonly used in cosmetics. It may promote wound healing by activating the immune system and helping form new blood vessels. The antioxidants in neem likely protect the skin by scavenging free radicals that can damage cells and cause skin aging [15, 14].

Neem oil can also kill insects, ticks, and mites. It may work by damaging the organs these pests need to feed. This is how neem functions as a pesticide and also how it can be effective at resolving infestations of scabies [16, 17, 18, 19, 20].

This oil may also be a natural spermicide. Components of neem may prevent conception by killing sperm or preventing it from moving [21, 22, 23, 24, 25].

When used orally, neem extracts have been suggested to help prevent cancer. Compounds in neem oil may work by:

In existing tumors, components of neem oil may prevent tumor growth by:

Additionally, neem may help control HIV by preventing the virus from infecting white blood cells and by interfering with its ability to replicate [31, 32, 33].

Scientists hypothesize that neem oil might support skin and hair health by boosting immune defense, collagen production, and antioxidants. It’s also thought to damage the organs of pests. These theories remain to be proven.

Keep in mind that the safety profile of neem oil and neem extract is relatively unknown, given the lack of well-designed clinical studies. The list of side effects below is not a definite one and you should consult your doctor about other potential side effects based on your health condition and possible drug or supplement interactions.

Neem oil applied to the skin is typically touted as safe, with many studies claiming that there were no side effects whatsoever–although such claims should always be viewed with healthy skepticism [34+, 14, 35+].

Rare instances of allergic reactions to neem oil have been reported, usually resulting in a rash. It’s not clear what part of the oil induces these allergies, so users should be cautious [36].

Neem oil shouldn’t be ingested. There have been reports of neem oil poisoning, particularly in children and the elderly. This is likely caused by azadirachtin and can lead to vomiting, seizures, and liver problems. As such, neem is best avoided or used with extreme caution in these groups [14, 9].

Applied vaginally, neem oil can cause genital itching, burning, and stomach pain, though serious side effects are rare. Some studies also reported decreased sexual satisfaction in users’ partners. Neem oil should not be used as a birth control method due to the lack of safety and efficacy data [37, 38].

Ingesting neem extracts, rather than applying neem oil to the skin, may affect heart rate, blood pressure, and fertility. Although serious side effects in humans are rare, it’s advisable to be extra careful taking such extracts and to always talk to your doctor before supplementing [39+, 40].

In rats, using a neem extract during pregnancy didn’t seem to cause problems in their offspring. However, because it can affect fertility in ways that aren’t totally understood, it’s probably best for anyone who is pregnant or is planning to become pregnant to avoid neem oil and neem supplements [41].

Neem oil is likely safe when applied to the hair and skin. It shouldn’t be ingested unless directed by a doctor since proper safety data are lacking.

How To Use Neem Oil

Neem oil supplements have not been approved by the FDA for medical use due to the lack of solid clinical research. Regulations set manufacturing standards for them but don’t guarantee that they’re safe or effective. Speak with your doctor before supplementing with neem oil.

Products based on the neem plant are available in a variety of forms. These include pills, oils, creams, shampoos, toothpaste, mouthwashes, and neem leaves themselves [14, 42].

Since high temperatures can destroy important molecules like azadirachtin, there is some logic behind the idea that cold-pressed neem oil might be “better”. However, there haven’t been studies directly comparing the health effects of neem oil that has or hasn’t been cold-pressed [43].

There is a wide variety in the exact contents of neem-based products. This can be due to the part of the plant being used and in what form it’s taken. Neem oil is not standardized [14].

Because neem oil is not approved by the FDA for any condition, there is no official dose. Users and supplement manufacturers have established unofficial doses based on trial and error. The variety of ways neem can be prepared and consumed make it even more difficult to establish a standard dosage. Discuss with your doctor if neem oil may be useful as a complementary approach in your case and which dose you should take.

Products like shampoos, mouthwashes, and insect repellents based on neem typically contain around 1-2% neem oil, though exact percentages vary [44, 45+, 46, 47].

For extracts, the dosing varies. One study suggested that about 20 mg of one extract per day would be safe, while another used 1 g per day of a different extract and reported no adverse effects [34+, 40].

How to Apply to Skin & Hair

Various cosmetic products contain neem oil while the pure oil is also commercially available. Have in mind that its potency will vary depending on the manufacturer.

Some people are allergic to neem oil. If you plan to use neem oil on your skin, it’s best to do a patch test first. Apply a small amount of the oil on the upper part of your inner arm and wait for at least 24 hours to see how your skin will react [48].

If you don’t develop a skin reaction, you can apply small amounts of neem oil directly to your skin – such as on areas affected by acne. Use sparingly due to its strong bioactive chemicals. This also applies to its use on the hair and scalp.

For hair care, be sure not to mix it primarily with thick oils (such as castor oil), as the mixture will be hard to wash out and may cause hair matting or tangling.

You can try neem oil on your hair and skin by first diluting it in another carrier oil (to about 2%) and applying a small amount. Make sure to do a patch test first.

Users recommend diluting neem oil to a 0.5-1% solution with water. For example, you can follow these ratios:

This should give you a 0.8% neem oil solution (about 30 ml of neem oil per 3785 ml of water), which is used in gardening as a natural pest repellent and insecticide.

The opinions expressed in this section are solely those of neem oil users, who may or may not have medical or scientific training. Their reviews do not represent the opinions of SelfHacked. SelfHacked does not endorse any specific product, service, or treatment.

However, many users also urged caution, particularly with more concentrated forms of neem, as high doses can cause unpleasant side effects.

Several users also commented on the smell of neem oil, with descriptions from “distinctive” to “awful”.

The neem tree has been used in Ayurveda and traditional medicine for thousands of years, but few clinical trials have been carried out.

Neem oil should only be applied to the skin or hair – accidental ingestion can cause poisoning.

Due to the risk of serious bad reactions, neem should always be used with caution, especially in more concentrated pill forms. Neem extract is usually made from the leaves, taken by mouth, and carries a far greater risk of side effects.

Neem oil is probably safe to use on the skin and hair, but it’s best to ask your doctor before supplementing with extracts.

You can also apply neem oil to plants as a natural pesticide. Users recommend diluting the oil with water to 0.5-1% and spraying it on plants.