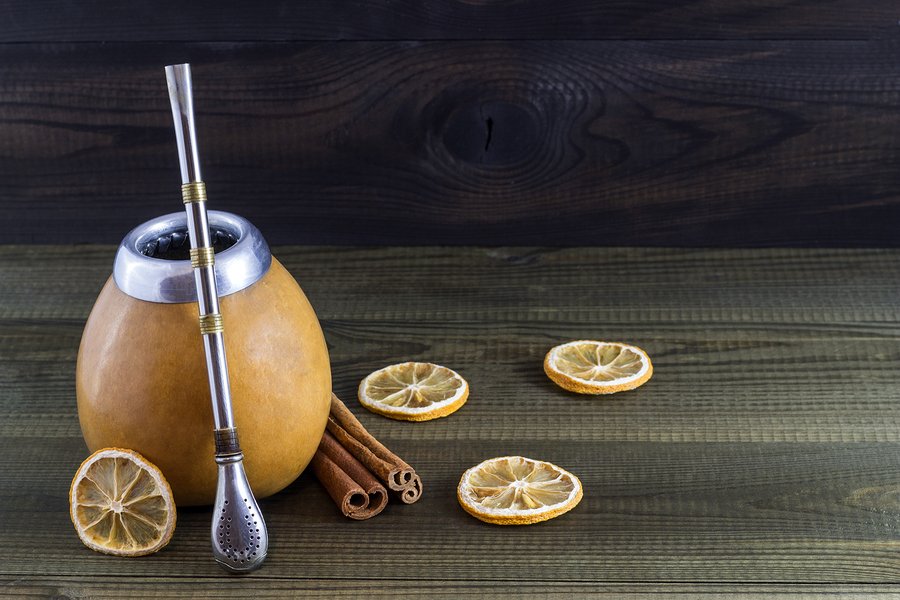 What is Yerba Mate?

Yerba mate (or mate) is a non-alcoholic drink made from the leaves of the tree Ilex paraguariensis. It has been widely consumed in South America for centuries as a social and medicinal beverage. Yerba mate can be consumed as a tea or as an ingredient in foods or supplements [1].

Some people believe that yerba mate decreases cholesterol, protects the liver, stimulates the brain, and protects the heart, among many other benefits [1].

Mate is bitter, and many consider it an acquired taste. Both the preparation of the mate and the drinking process are considered to be almost ceremonial. Learn more about yerba mate and its benefits.

Yerba mate is full of compounds that have beneficial effects. It contains the following compounds [1]:

Also, yerba mate contains a variety of saponins. These saponins are what give mate its distinct taste. They also decrease inflammation and cholesterol [1].

Yerba mate contains approximately 9.8 mg of caffeine per oz. For comparison, a regular cup of coffee has about 17 mg/oz and espresso has 40 mg/oz. Both green and black tea have approximately 5 mg/oz. The effect of caffeine on energy is probably due to its similarity in structure to adenosine; it most likely occupies adenosine receptors in the brain. Binding of adenosine causes sleepiness, so caffeine occupying the receptors instead blocks this sensation [2].

Thus, yerba mate is being researched for potential benefits to heart disease, cancer, aging, and autoimmune disorders through its antioxidant capabilities [6].

Yerba mate is generally recognized as safe, but supplements have not been approved by the FDA for medical use and generally lack solid clinical research. Regulations set manufacturing standards for them but don’t guarantee that they’re safe or effective. Speak with your doctor before supplementing.

People with abnormal cholesterol levels were put into 3 treatment groups, yerba mate, dietary intervention, or both. Surprisingly, only the group consuming yerba mate (330 mL of tea with 20 mg/mL mate) experienced a decrease in LDL cholesterol. Total, HDL, and non-HDL cholesterol and triglyceride levels did not change across all groups (74 participants) [10].

Yerba mate also decreased LDL and increased HDL (good cholesterol) in patients on long-term statin therapy more than statins alone, according to a study on 30 patients with high cholesterol [11].

In a mouse study, it affected food intake and energy utilization and reduced the levels of cholesterol, triglycerides, and sugar in the blood. Additionally, it reduced the accumulation of fat in mice fed a high-fat diet [17].

To test yerba mate’s effect on diabetes, 29 type 2 diabetes and 29 pre-diabetes patients were given either 330 mL/3x a day of roasted mate tea, dietary intervention, or both (over 60 days). In the type 2 diabetes patients, mate tea decreased fasting glucose, glycated hemoglobin A1c (HbA1c), and LDL cholesterol levels. However, total energy intake, protein, carbohydrate, cholesterol, and fiber didn’t change. In the prediabetic patients, tea with dietary intervention improved cholesterol and triglyceride levels and reduced their consumption of fat and cholesterol and increased their fiber intake [20].

Some researchers believe that yerba mate may have an additional effect on diabetes by lowering insulin resistance [21].

AGEs (advanced glycation end-products) contribute to diabetes complications like poor blood flow, bad vision, kidney damage, and inflammation. AGEs are produced from high blood sugar, so if you want to reduce them with yerba mate, it’s best to not add sugar. Yerba mate, as a result of its antioxidant capacity, caused a significant dose-dependant reduction of AGEs by blocking a step in AGE production in test tube studies [22, 23].

Regular (weekly) drinkers of mate were more likely to classify pain following oral surgery as none or light [24].

Yerba mate relieved pain in mice through the noradrenaline pathway [25].

According to one review, yerba mate contains methylxanthines that may have applications in Parkinson’s and Alzheimer’s (disorders of the nervous system) [26].

A case-control study found an inverse relationship between mate consumption and Parkinson’s disease [27].

No clinical evidence supports the use of yerba mate for any of the conditions listed in this section. Below is a summary of the existing animal and cell-based research, which should guide further investigational efforts. However, the studies listed below should not be interpreted as supportive of any health benefit.

Yerba mate contains caffeine, which has a diuretic effect. Thus, it may help reduce the swelling/bloating due to fluid retention [1].

Yerba mate specifically improved short-term memory in as little as 1.5 hours after administration in rats [28].

In another rat study, treatment with yerba mate prevented memory impairment from haloperidol (an antipsychotic) [29].

The anti-inflammatory effect of yerba mate was studied in mice with pleurisy (fluid in the lung). It inhibited inflammation and allowed the lung fluid to be carried away [30].

Yerba mate helps in the treatment of asthma, arthritis, and inflammatory bowel disease (IBD) in mice [32].

It had an anti-inflammatory effect in another animal study [33].

However, in a rat study, mate only reduced the production of IL-6 but not other inflammatory markers [34].

Yerba mate improved the recovery from heart damage, as seen in experiments with rat tissues [35].

Yerba mate is a potential liver-protective compound. It stimulated bile flow and treated gallstones, as well as prevented enlargement of the spleen and inflammation of the stomach in mice [37].

In another study, yerba mate prevented liver inflammation in mice [21].

Continuous intake of yerba mate reduced anxiety in mice probably by way of the acetylcholine/cholinergic system [18].

In mice, yerba mate helps with depression through NMDA receptors (similar to ketamine) [38].

Yerba mate killed certain bacteria and fungus species in experiments with mice. Mate may potentially prevent dandruff, tinea, and eczema by killing Malassezia furfur. It may also prevent food poisoning, Crohn’s disease, meningitis, and cellulitis due to its inhibitory effect on E. coli and S. aureus [17, 39, 40].

Yerba mate also stops the growth of H. pylori, which causes progressive damage to the lining of the stomach [41].

When Yerba mate was combined with guarana and damiana, it slowed the emptying of the stomach and helped people to feel full from less food [1].

In a cell study, yerba mate acted as an anti-mutagen, preventing DNA damage and improving DNA repair after oxidation [4].

However, drinking yerba mate has been correlated with esophageal, mouth, lung, bladder, kidney, and other cancers of the head and neck. The geographical regions where this correlation was found is also correlated with high alcohol consumption and cigarette smoking, increased risk of esophageal cancer was higher in people who never smoke and people who never drink. Consumption of hot drinks is correlated with esophageal cancer, so it’s possible some of the correlations with cancer is temperature related. However, its association with other types of cancer seem to point to other causes [42, 1, 43, 44].

A technique for measuring PAHs (polycyclic aromatic hydrocarbons), a known cause of cancer stemming from red meat and smoking, was used to find that yerba mate is equivalent to smoking (study with 200 healthy adults). Although, it is important to note that many users achieved the same minimum PAH achieved by non-users [8, 9].

Interestingly, a case study found that high mate consumption was negatively correlated with breast cancer risk. Similarly, a review paper stated that yerba mate was associated with lower rates of some cancers and higher rates of others [45, 1].

Pregnant women should not have more than 3 cups of yerba mate tea per day, as too much caffeine can negatively affect pregnancy outcomes and is a risk for infant mortality [46, 47].

To avoid adverse effects and unexpected interactions, we strongly recommend talking to your doctor before using yerba mate.

The preparation of the mate varies considerably from region to region. However, the typical preparation is inside an empty pumpkin container (which is also called “the mate”). There are semi-strict rules about how to prepare a good mate:

Although many people drink mate in solitude, it is traditionally a social activity. People gather together and share the same mate. One person is in charge of pouring, and the mate is usually shared in a circle.

Yerba mate can also be steeped in water near its boiling point, like any other herbal tea. This is called “boiled mate” [48].

Brain
4.5
1
Short-Term Memory Loss: Potential Causes and Treatments
Neuroscience
4.7
3
All About GSK3B: What It Does, How To Inhibit It, And More
Genetics
0
Genes that May Affect Uric Acid Levels