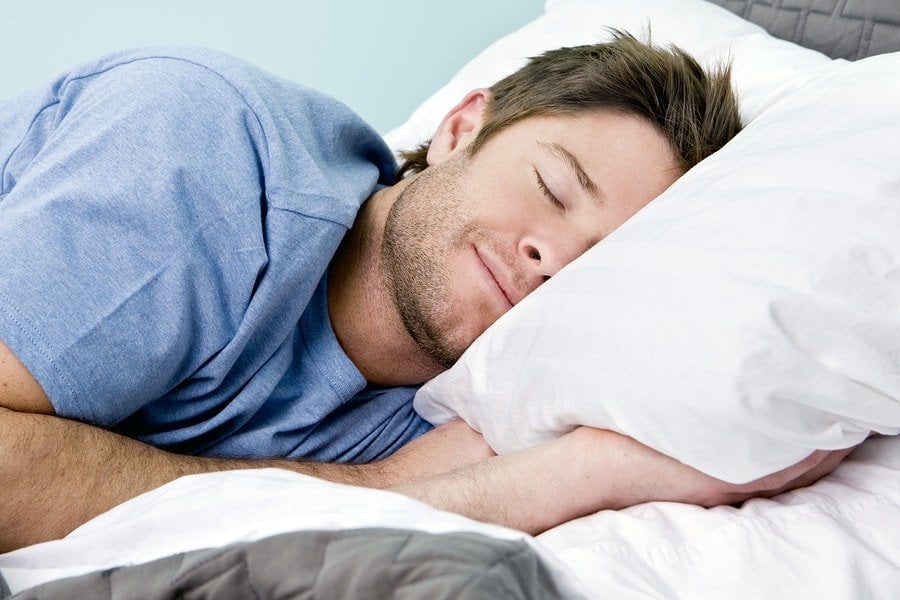 Sleep problems may be caused by lifestyle factors, health conditions, and genetics. If you struggle with insomnia, it is important to understand which genes may play a role. A genetic makeup may influence lifestyle factors and point to specific aspects that need to be addressed. Read on to learn the genetics of your circadian rhythm and sleep requirements.

Every cell in the human body has a molecular clock. This molecular clock controls our circadian rhythm through the ebb and flow of cellular production in 24-hour cycles.

This ebb and flow are controlled by transcription factors (proteins that control cellular production) in a genetic circuit that includes the genes CLOCK, BMAL1, Period (Per1, Per2, Per3, often shorthanded collectively as Per), and Cryptochrome [1].

In addition to the circadian rhythm genes, DEC2 and Per3 are associated with changes in sleep requirements [1].

Therefore, individuals with low functions of these genes may need less sleep.

The SNP rs1801260 (C) inside of CLOCK is linked to eveningness, being more sleepy during the day, and reduced morningness. People with the T allele are more likely to be morning people and have less total sleep duration [4, 5].

The SNP rs2228099 inside of BMAL1 may be associated with insomnia and early awakening among middle-aged women [6].

PGC-1alpha has important roles in metabolism and mitochondrial health. It also activates clock genes, which control the circadian rhythm [7, 8].

Mice without PGC-1alpha have an abnormal circadian rhythm, body temperature, and metabolic rate [9].

In some individuals, the CC genotype of rs8192678 inside PGC-1alpha is associated with worse insomnia in combination with ApoE4 [8].

AhR (Aryl Hydrocarbon Receptor) has important roles in detoxification of certain toxins. In addition, AhR suppresses Per1 production, so it can disrupt CLOCK-BMAL activity and disturb the circadian rhythm [10]. Therefore, it is better to have AhR deactivated most of the time.

DEC2 (encoded by the BHLHE41 gene) represses CLOCK/BMAL1 activity. A mutation in DEC2 is associated with shorter sleep in humans and increased wakefulness in mice [11].

Morningness and eveningness are partly heritable. That means you are likely to have a similar type as one of your parents [12].

People with the longer form also tend to suffer worse from cognitive dysfunction due to sleep deprivation than those with the shorter form [14].

The ABCC9 gene is used for making potassium channels mostly in the hearts and skeletal muscles. The A allele of the SNP rs11046205 correlates with reduced sleep duration, but how exactly this gene influences sleep is unclear [16].

Reducing the function of this gene in fruit flies prevent the flies from sleeping for the first three hours of the night [16].

It’s important to note that just because certain genotypes are associated with a condition or irregular lab marker, it doesn’t necessarily mean that everyone with that genotype will actually develop the condition. Many different factors, including other genetic and environmental factors, can influence the risk of insomnia and other sleep disorders.

Insomnia is partly contributed by genetics; approximately 35% of people with insomnia have some insomniac family members, with the mother being the most commonly affected [17].

In addition to the circadian rhythm genes, like BMAL, PER3 and CLOCK, there are other genes that may play a role in insomnia [18, 19, 20].

Blocking the 5-HT2A receptor promotes sleep in rats. Drugs that block 5-HT2A receptors are under development and clinical trials for the treatment of insomnia in humans [21, 22].

The activation of the 5-HT2A receptor also exhibits a circadian rhythm [23].

Activation of this receptor decreases glutathione and BDNF, two substances that are important for quality sleep [24, 25].

Because stress activates this receptor, people who genetically have higher 5-HT2A activation might be more susceptible to insomnia from stress. Read this post to learn more about 5-HT2A, which might be problematic in people with insomnia.

Adenosine is one of the sleep-promoting substances that are present at low levels in the morning and build up throughout the day. At nighttime, high levels of adenosine and strong activation of adenosine receptors are important for quality sleep [29].

There are four types of adenosine receptors (A1R, A2aR, A2bR, and A3R). Among these, A1R controls the sleep-wake cycle while A2aR helps induce sleep [29].

Like adenosine, uridine is another sleep-inducing substance. High levels of uridine in the brain and uridine receptor activation at night is important for sleep. Uridine binds to the P2Y receptors in areas of the brain which regulate natural sleep [31].

BDNF production during the day correlates with the amount of slow-wave (deep) sleep during the subsequent night, suggesting that BDNF is a measure of sleep pressure (the body’s desire to sleep) [33].

BDNF appears to have a circadian rhythm, being high during the day and lower at night [34].

People the T allele of the BDNF SNP rs6265, which lower BDNF levels, may not sleep as deeply as people with the C allele or the CC genotype. In addition, the T allele correlates with worse cognitive decline due to sleep deprivation [35].

Several genes that control calcium signaling in the brain, including ROR1, ROR2, PLCB1, CACNA1A, NOS3, and ADCY8, are linked to insomnia [36].

ROR1 controls the development of neurons together with ROR2. ROR1, ROR2, and PLCB1 are important in learning and memory. The significant SNP (rs11208305) inside of ROR1 gene is associated with insomnia among some female patients [36].

Other genes containing insomnia-associated SNPs are [37]:

Increasing calcium and cAMP in the cells may help with this pathway.

How Brain and Neurotransmitters Affect Sleep

Upload your DNA for free to SelfDecode

The Link Between Cannabis and Psychosis: Research Clues