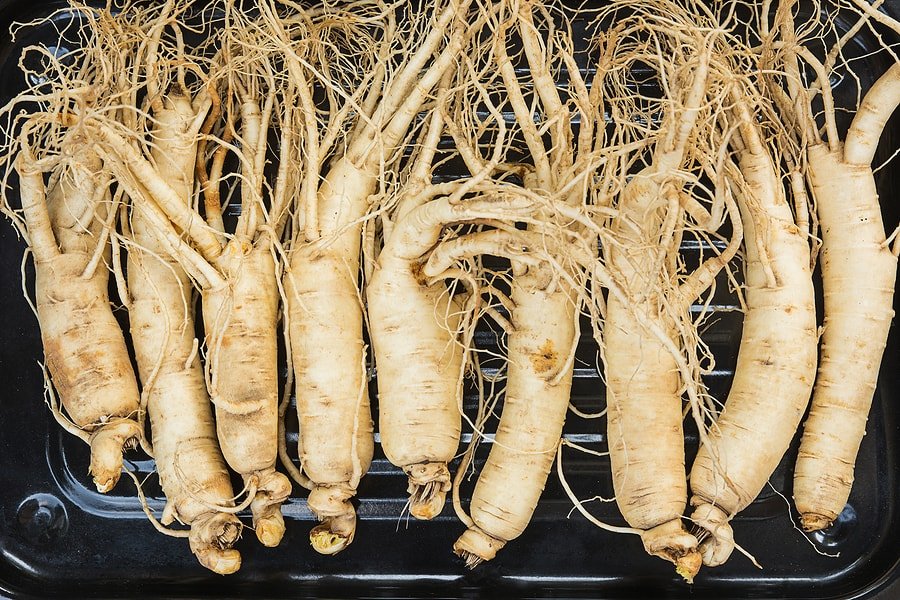 Ginseng is an herbal plant that has been used for thousands of years in Eastern medicine. It’s claimed to improve fatigue, performance, fertility, cognition, and even prevent and fight cancer. It has antioxidant and anti-inflammatory effects. Read on to learn about how this ancient plant may improve your health.

American ginseng is known for its stimulant properties and is used in traditional Native American medicine to relieve headaches and to treat fever and indigestion. Research suggests it may boost mood, immunity, and cognition.

American ginseng (Panax quinquefolius) is commonly used in traditional Native American medicine for relaxation and to combat fatigue. It is also thought to regulate hormones, relieve stress, and stimulate the immune system [3].

Asian ginseng, also called red or Korean ginseng (Panax ginseng), is sometimes considered the opposite of American ginseng. It is thought to stimulate the nervous system and enhance cognitive performance. Preliminary research suggests it may help with neurodegenerative diseases, cancer, and stroke [2].

Siberian ginseng (Eleutherococcus senticosus) may help with fatigue and boost the immune system, much like Asian ginseng. However, Siberian ginseng is not a true ginseng because it comes from a different family of plants [4].

The main active components of American ginseng are ginsenosides. Over thirty ginsenosides have been isolated, which can be classified into several groups [3]:

Ginseng is considered a tonic or adaptogenic that enhances physical and sexual performance and promotes vitality [5].

A meta-analysis of 7 studies and 349 people found that Korean red ginseng was effective in treating erectile dysfunction. However, the total sample sizes and the quality of the studies were too low to draw definitive conclusions. Thus, more rigorous studies are necessary [6].

While 1,000 mg, 3x/day of Korean red ginseng improved male sexual performance in a study of 60 men with mild erectile dysfunction, there was no change in testosterone levels [7].

In a study of 45 men with erectile dysfunction, Korean red ginseng (900 mg, 3x/day) boosted overall sexual performance. 60% of the patients had improved erections, making ginseng an effective treatment for erectile dysfunction. In another study with 90 men, it had the same efficacy rate but 30% of the placebo group also saw improvements [8, 9].

The existing evidence suggests that ginseng may help with erectile dysfunction and fertility issues. You may discuss with your doctor if it may help in your case.

Several components of ginseng, maca, ginkgo, arginine, and yohimbine, all appear to help sexual function by promoting the production of nitric oxide, which improves blood flow to and within the penis [12].

In a trial with 227 people, those who took 100 mg of a Korean red ginseng extract (G115) along with their flu vaccine were less likely to get a cold or the flu. The ginseng group also had higher levels of natural killer cell activity [13].

Those taking red ginseng powder during chemotherapy treatment had a higher 5-year disease-free survival and overall survival rate in a study on 42 people. In another trial on 96 people with lung cancer, ginseng carbohydrates enhanced the immune function by increasing Th1 cytokines (IFN-gamma and IL-2) while reducing Th2 cytokines (IL-4 and IL-5) [17, 18].

Although limited, the evidence suggests that ginseng boosts immune function and may help prevent infections. Discuss with your doctor if it may help in your case.

A meta-analysis of 4 different studies with 429 healthy participants found that ginseng may reduce fatigue. However, the authors concluded that additional studies on larger populations were needed to confirm their results [20].

Similarly, 2 g/day of ginseng for 8 weeks improved cancer-related fatigue in a study with 364 participants. A much higher dose (800 mg/day) improved fatigue, well-being, and overall quality of life in another study of 30 people with this condition [21, 22].

In another study with 90 people, 2 g/day improved chronic fatigue, possibly due to its antioxidant properties [23].

Again, limited evidence suggests that ginseng may help decrease fatigue, especially in people with cancer. You may use it for this purpose if your doctor determines that it may be helpful.

A meta-analysis of 9 studies and over 300,000 people found that ginseng consumption was associated with a decreased risk of developing cancer. The effect was not organ-specific [24].

In a study of 643 people, 1 g/week of red ginseng extract was associated with a reduced risk of cancer, but only in men [25].

Another study with almost 4,000 people found the consumption of different types of ginseng was associated with decreased risk of certain cancers (such as lip, mouth, pharyngeal, laryngeal, esophageal, lung, stomach, colorectal, liver, pancreatic, and ovarian cancer) [26].

All in all, the existing evidence suggests that ginseng consumption is associated with a decreased incidence of many cancer types. You may discuss with your doctor if ginseng may help you prevent cancer.

Note, however, that the studies dealt with associations only, which means that a cause-and-effect relationship hasn’t been established. The fact that a lower incidence of cancer was observed in people consuming high amounts of ginseng doesn’t necessarily mean that its compounds prevent cancer. Complex disorders like cancer always involve multiple possible environmental and genetic factors that may vary from one person to another.

Importantly, the studies by no means suggest that ginseng helps treat cancer. Never take ginseng (or any other supplements) in place of proven anticancer therapies.

In a study with 61 Alzheimer’s patients, both 4.5 and 9 g/day of Korean red ginseng improved cognitive function, which continued to the 2-year follow-up [29].

In another study with 61 people, treatment with 9 g/day (but not 4.5 g/day) Korean red ginseng improved some symptoms of Alzheimer’s [30].

Although promising, the evidence to support this health benefit is a bit limited. You may try ginseng as an add-on therapy for Alzheimer’s or other conditions with cognitive decline if your doctor determines that it may be helpful in your case. Never use ginseng in place of what your doctor recommends or prescribes.

In a study with 71 women, 3 g/day red ginseng increased SOD activity but had no effects on the levels of glutathione peroxidase (another antioxidant enzyme) and 8-hydroxydeoxyguanosine (a marker of oxidative stress) [34].

In a study with 82 people, 1-2 g/day ginseng extract decreased levels of markers of oxidative stress, ROS, and malondialdehyde. The higher dose enhanced glutathione reductase activity and total glutathione content. However, supplementation did not change the total antioxidant capacity or the activities of the antioxidant enzymes catalase, SOD, and peroxidase [35].

To sum up, limited evidence found antioxidant and anti-inflammatory activity in ginseng extracts. Further clinical research should investigate how to use it therapeutically.

In a trial of 17 healthy people, 3 g Korean red ginseng improved artery stiffness but did not change blood pressure [39].

Supplementation with 3 g/day of red ginseng decreased total and LDL cholesterol levels as well as artery thickness in a study with 72 people [40].

However, 3 g/day Korean red ginseng did not improve artery stiffness in a study on 80 people [41].

Because the evidence is based on a few, small clinical trials with mixed results, we cannot conclude for certain that ginseng helps prevent heart disease. Larger, more robust clinical trials are needed to shed some light on this potential health benefit.

A review of 16 studies determined that ginseng slightly reduced fasting blood glucose of both diabetics and non-diabetics but pointed out that the different ginseng types may differ in their effectiveness, making it necessary to conduct more clinical studies [43, 44].

In a study on 36 people, non-insulin dependent diabetics given 100 or 200 mg of ginseng had lower fasting blood sugar levels. The 200-mg treatment improved HbA1c [48].

However, 3-8 g/day Korean red ginseng extract or 250-500 mg/day ginsenoside Re failed to improve insulin sensitivity and the function of the cells that make insulin (beta-cells) in a study of 15 people [50].

A review of two studies determined that consistent ginseng consumption had no effect on blood sugar control in healthy individuals [51].

Again, the mixed results make it difficult to draw conclusions about the potential benefits of ginseng in diabetics. Further clinical research is needed to clarify its effects on blood sugar and insulin.

In a trial on 27 healthy adults, 200 mg of a ginseng supplement (G115) boosted performance on a math task and reduced mental fatigue. In another trial, 30 people improved mental performance and experienced less fatigue after taking 200 mg (but not 400) of this supplement [52, 47].

A similar trial of 30 people had the opposite result: those taking 200 mg of G115 had a slower response on a mental task, while 400 mg improved performance on this task and mood [53].

Ginseng supplementation slightly reduced feelings of depression and improved well-being in a study of 384 people. Similarly, 100-200 mg enhanced mood in a trial on 36 people [54, 48].

Taken together, the mixed results of the few studies make it difficult to establish the effects of ginseng on cognitive function and mood for certain.

Supplementation with 3 g/day of red ginseng improved menopause symptoms in a trial with 72 women. The same dose improved sexual arousal, which is often impaired in menopausal women, in another trial on 32 women [40, 56].

However, ginseng only slightly reduced feelings of depression and improved well-being but did not affect menopause symptoms in a study of 384 women [54].

Korean red ginseng (2 g/day) reduced inattention and hyperactivity in 2 studies on 70 children and 3 adolescents with ADHD [60, 60].

Two small clinical trials cannot be considered sufficient evidence to support the use of Korean red ginseng in people with ADHD. More clinical trials on larger populations are needed to confirm these preliminary results.

However, in another study on 36 people, both the ginseng-treated and the placebo groups lost weight [48].

No clinical evidence supports the use of ginseng for any of the conditions listed in this section. Below is a summary of the existing animal and cell-based research, which should guide further investigational efforts. However, the studies should not be interpreted as supportive of any health benefit.

Ginseng treatment may help with physical performance and increase resistance to stress and aging by causing the hypothalamic-pituitary-adrenal axis to increase blood corticotropin and corticosteroid levels, as seen in animal and cell-based studies [5].

Ginseng and seabuckthorn increased the enzymes that break down alcohol (ADH and ALDH) in mice with acute alcohol intoxication, possibly helping lessens its effects in the body [66].

Side Effects and Drug Interactions

As a stimulant, ginseng may cause nervousness and/or sleeplessness, as well as high blood pressure, anxiety, vomiting, and diarrhea in high doses.