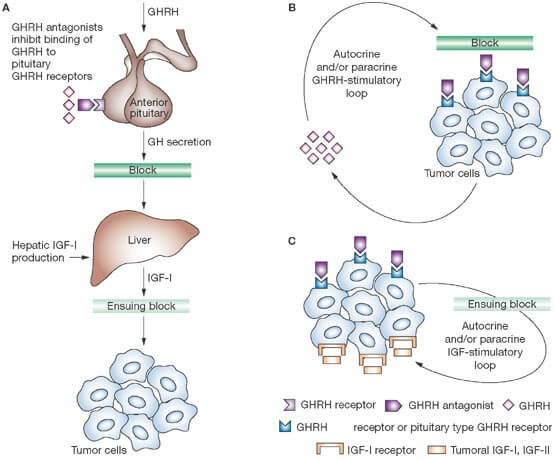 Growth hormone releasing hormone (GHRH) has many positive roles in the human body; it stimulates growth, development, and muscle strength. On the other hand, it’s involved in the progression of certain chronic diseases. Read on to learn the roles of GHRH in health and disease.

What is Growth Hormone-Releasing Hormone?

Growth hormone-releasing hormone (GHRH), also known as somatocrinin, is produced in the brain. The hypothalamus releases GHRH to stimulate the pituitary gland in order to release growth hormone [1].

By regulating the production of growth hormone and other important messengers, GHRH plays a complex role in health and disease.

Please note: the studies quoted in this section are meant to clarify the physiological roles of naturally-occurring GHRH in the human body. They’re not supporting the use of this hormone in treatment or prevention of any health condition.

Human patients who have suffered a heart attack have extensive heart damage. Treatment with GHRH promoters reduce inflammation and improve the mechanisms that remodel and heal cardiac muscle tissue [2].

In large swine who have had heart attacks, daily injections of GHRH reduced the scar tissue buildup in the heart and decreased strain [3].

In rat hearts, GHRH promotes the activation of a kinase that helps protect cardiac cells [4].

In human patients suffering from a traumatic brain injury, the decreased size of the pituitary gland leads to a decrease in GHRH. Treatment with GHRH may improve pituitary size and health [11].

Animals who were injected with GHRH showed a decrease in time taken to heal skin wounds [13].

Mice treated topically with GHRH after suffering an extensive wound had rapid wound closure, reduction in inflammation, and a decrease in scar tissue [14].

Young adults suffering from Prader-Willi syndrome have high risks of developing diabetes, obesity, and heart disease at a young age, increasing the chances of death.

Treatment of these patients with GHRH and growth hormones throughout adulthood decreases overall fat mass and instead promotes lean body mass [15].

During pregnancy, elevated levels of GHRH in placenta tissue decreased cell stress, increased cell growth, and reduced the chance of loss of pregnancy due to tissue death [17].

Patients suffering from pulmonary neuroendocrine tumors (NET) have elevated levels of GHRH that further promote the symptoms of NET [21].

Humans suffering from malignant mixed Mullerian tumors have increased levels of GHRH that increase the size and proliferation of these tumors [22].

In patients suffering from ectopic-acromegaly (lung tumors and lesions) had significant amounts of GHRH within the lesions, promoting their growth and spread throughout the lung [23].

Humans suffering from papillary thyroid cancer have increased levels of GHRH that promote cancer symptoms by promoting the expression of SV1 in tumor cells [24].

In vitro tests of human melanoma cancer cells show high levels of GHRH that require antagonists in order to prevent the spread of skin cancer [25].

Large B-cell lymphoma causes an increase of GHRH, which leads to a growth of the pituitary gland, further progressing the lymphoma symptoms in human patients [26].

In female patients, there are several markers identifiable in leading to breast cancer. GHRH is one of those genes that is shown to promote breast cancer growth and spread [27].

There are increased levels of GHRH and GHRH receptors on 6 of the 9 major breast cancer lines, increasing estrogen, progesterone, and spread of breast cancer [28].

In normally healthy adults, those with higher levels of GHRH had increased lipid profiles in the blood, high glucose levels, and lower insulin levels than those with average GHRH levels [29].

Eye inflammation is the cause of many eye diseases in elderly patients. An increase of GHRH receptors in the iris and ciliary body was shown to promote macrophages and leukocytes, increasing inflammation and decreasing the vision of the patient [31].

In all types of sports, GHRH has been banned by the World Anti-Doping Agency [32].

In some mutations that decrease overall GH production in young adults, treatment with GHRH proves to be toxic to the pituitary gland. This can cause other hormone destruction and deficiencies [33].

Once again, this post is for informational purposes only and discusses the roles of naturally-occurring GHRH. It doesn’t support its use for any condition. If you have a medical condition that may require hormonal treatment, make sure to seek medical attention.