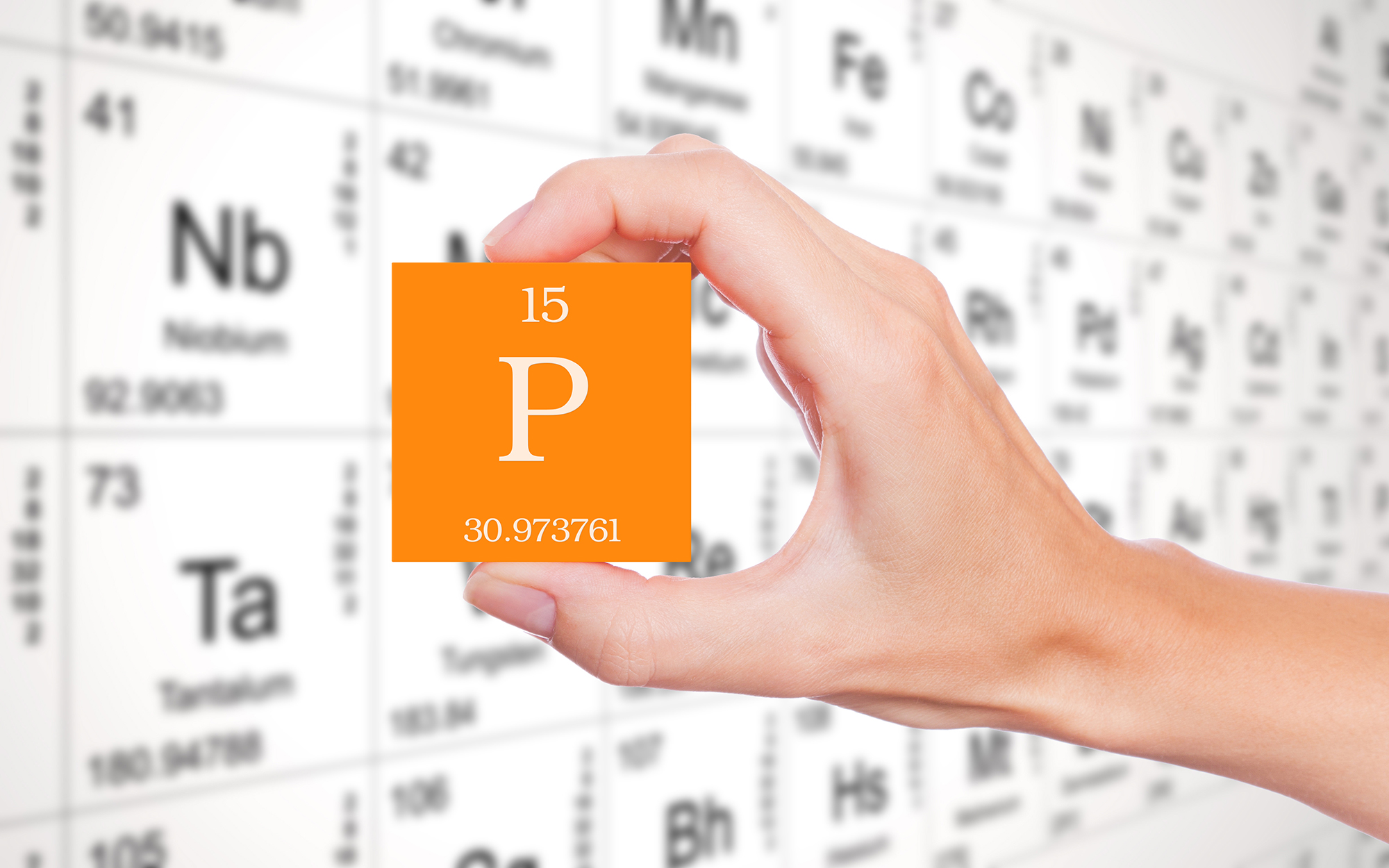 Phosphorus is the second most abundant mineral in the body, essential for energy, bone, heart, lung, and brain health. Imbalances may disrupt your metabolism and raise your risk of chronic diseases. Diet and income can have a huge impact, affecting the number of dangerous phosphate additives in your grocery basket. Learn more about the causes and effects of high blood phosphate and how to optimize it.

Phosphorus is the sixth most abundant element in the body after oxygen, hydrogen, carbon, nitrogen, and calcium. It is the second most abundant mineral and makes up about 1% of our body weight [1, 2].

85% of phosphorus in the body is stored in the bones. The remaining 15% is scattered in tissues throughout the body [4, 5].

Phosphorus has many important roles [2]:

Blood phosphate comprises a very small part of total body phosphate. Nevertheless, it gives a good estimate of phosphate levels in the body [6].

Phosphorus in the Diet: The Role of Processed Food

Phosphorus is naturally ubiquitous in all foods: meat, fish, eggs, dairy, and vegetables. Milk and dairy products are the richest sources of phosphorus [3, 2, 2].

It turns out that the amount of total dietary phosphate is directly influenced by the intake of processed food and beverages. However, this is not due to naturally high phosphorus in these food items. Instead, it’s a result of phosphate salts being used as additives [3].

Manufacturers add phosphates to their products to enhance appearance and shelf life. Phosphorus-based additives are used as pH stabilizers, leavening, and anti-bacterial agents. They account for about 10 – 50% of total daily phosphorus intake in the typical Westernized diet [8, 9].

One study looked into over 2,000 best-selling grocery products in Ohio. 44% of them contained phosphate additives. The additives were particularly common in:

Natural or organic sources of phosphorus need to be broken down by digestive enzymes, leading to slower and less efficient absorption in the gut. The absorption ranges from 40 to 70% and is higher from animal sources (up to 70%) than from plants (up to 50%). Phytates greatly lower phosphorus bioavailability. They are found in whole grains and vegetables [13, 14, 7].

In a non-fortified mixed diet, most of the digestible phosphorus comes from proteins, making protein-rich foods the main source of natural phosphorus [15].

Conversely, inorganic phosphates used as additives don’t require enzymatic digestion. They are rapidly absorbed and have high bioavailability (over 80%) [13, 15].

Phosphorus is absorbed in the gut, stored in the bones, and removed by the kidneys.

Phosphate in the bones acts as a buffer that responds to specific imbalances. It moves in and out of bones as needed. Bone breakdown releases phosphorus, raising its blood levels. Increased bone mineralization, on the other hand, attracts phosphorus into the bones and lowers its blood levels [7, 2].

In adults, kidneys will normally get rid of a fairly constant amount of phosphorus (> 90%). But when the supply is low, kidneys can reabsorb phosphate very efficiently, reducing urine levels down to virtually zero. Also, when there’s phosphate overload, healthy kidneys can rid the body of any excess amounts [1, 2].

Other hormones, such as thyroid hormones, insulin, corticosteroids, and calcitonin, have a more modest role in phosphate metabolism [1].

Phosphorus metabolism is tightly bound to that of calcium – both minerals are affected by the same hormones, usually in the opposite direction. In addition, phosphate can bind calcium in the blood, thereby reducing its levels. Our health depends on a delicate balance between these two minerals [2, 3].

You can measure your phosphate levels by doing a simple blood test.

A result that’s higher than normal, doesn’t necessarily mean that you have a health condition needing treatment. Your doctor will interpret your result, taking into account your medical history, symptoms, and other test results.

Causes shown here are commonly associated with high phosphate levels. Work with your doctor or another health care professional to get an accurate diagnosis.

The following can interfere with phosphate measurement, resulting in falsely high levels:

In the first study of 14,000 US adults, participants with income below the poverty level were twice as likely to have high blood phosphate levels (≥ 4.4 mg/dL) [41].

Similarly, in the second study with over 2,800 people, those who had the lowest income or were unemployed were more than twice as likely to have high phosphate levels [42].

This relationship is probably a direct consequence of diet. People who are poor and live in urban environments consume cheaper processed and fast foods that contain phosphate additives [42].

If you have mild hyperphosphatemia, you probably won’t experience any symptoms.

High phosphate binds calcium and forms crystals (calcium phosphate) that can accumulate in various tissues. In the blood vessels, their buildup (calcification) may cause damage or hardening [3, 45, 46].

In a large study of over 110,000 people, both low and high blood phosphate levels were linked to an increased risk of heart disease. Higher levels within the normal range also increased the risk [47].

In another study of over 2,500 people, higher-range normal levels (> 3.6 mg/dL) were linked to a 1.5X higher risk of calcification in the arteries, while levels above 4 mg/dL increased the risk by over 2X [48].

In a study of over 2,000 healthy people, phosphorus above 4 mg/dL was associated with double the risk of developing chronic kidney disease [51].

In over 12,000 people, higher blood phosphorus levels, even within the normal range, were linked with increased fracture risk in both men and women [52].

Strong bones require a balance between phosphorus and calcium levels. High dietary phosphorus can throw this balance off. In 85 postmenopausal women, consumption of one or more bottles per day of phosphoric acid-containing soft drinks (such as coke) was associated with lower calcium levels [56].

In a study of over 5,500 men, higher baseline blood phosphate was associated with higher odds of poor executive function 4 years later [57].

In over 1,000 dialysis patients, infections were more frequent among those with high phosphate levels [58].

In over 7,000 people, higher phosphate levels were linked to an age-related decrease in muscle strength in those over 65 years old [60].

The relationship between high phosphate levels and cancer is not straightforward. High phosphate levels are mostly linked to an increased risk of cancer, but they may also decrease the risk in some cases. High levels may be more detrimental for men than for women, although this is still uncertain.

In almost 400,000 people, higher phosphate levels were linked to higher overall cancer risk in men. High levels were associated with an increased risk of pancreatic, lung, thyroid, and bone cancer in men, and esophagus, lung, and nonmelanoma skin cancer in women. Conversely, the risk of breast, endometrial, and other endocrine cancers dropped with higher phosphate levels in both sexes [61].

In over 47,000 men, higher dietary phosphorus was associated with greater risk of total, deadly, and high-grade prostate cancer [62].

In a small study of 100 people, all cancer patients had high phosphate levels [38].

Feeding mice with a diet high in phosphate stimulates the growth of lung tumors, both in number and size [63].

In a study of almost 13,000 people, high blood phosphate levels were linked to increased mortality [64].

In almost 1,000 people, baseline phosphorus > 3.9 mg/dL was associated with an increased risk of death from heart disease over the next 5 years [66].

Some studies found that this link holds true only in men. In 6k people monitored for over 10 years, phosphate was linked to deaths only in men [67].

In another study on over 1,300 older men, higher phosphorus levels (≥ 3.6 mg/dL) increased the risk of death from any cause by 1.6 times. In an 18-year follow-up study of over 2,500 people with high blood pressure, diabetes, and/or obesity, higher phosphate levels were associated with more deaths in men [68, 69].

Phosphorus intake alone may increase the risk regardless of blood levels. In over 9,600 healthy adults, higher phosphorus intake was associated with higher deaths from any cause in those who consumed > 1400 mg/day of phosphorus [70].

Decreasing phosphorus levels may lower the risk. In over 6,700 patients with chronic kidney disease on dialysis, phosphate-binding agents decreased deaths from heart disease or other causes by over 20% [71].

The most important thing is to work with your doctor to find out what’s causing your high phosphate and to treat any underlying conditions!

Eat foods that are low in phosphorus to maintain blood phosphate levels within a healthy range. Avoid protein-heavy and dairy products. Most importantly, eliminate foods that contain phosphate additives (cooked ham, roast breast turkey/chicken) and soft drinks. Processed food can have up to 70% higher phosphate content than non-processed alternatives [21, 72, 73].

Adopting a plant-based diet may help, as studies suggest that phosphate is less readily-absorbed from plants, especially those containing phytates [74, 14].

Make sure you are properly hydrated [28].

Avoid using enemas that contain phosphate salts. Your body can absorb these salts, leading to excess phosphate levels in the blood [76].

If you have uncontrolled diabetes, it is critical to bring it under control with diet, exercise, and prescribed therapy [77].

If your phosphate levels high, your doctor will usually prescribe fluids (unless you have kidney failure). If your levels have been high for a long time, phosphate binders such as aluminum and magnesium salts can reduce the phosphate load. These do have side effects and can only be used in a limited capacity [1].

Discuss the following supplements with your doctor: