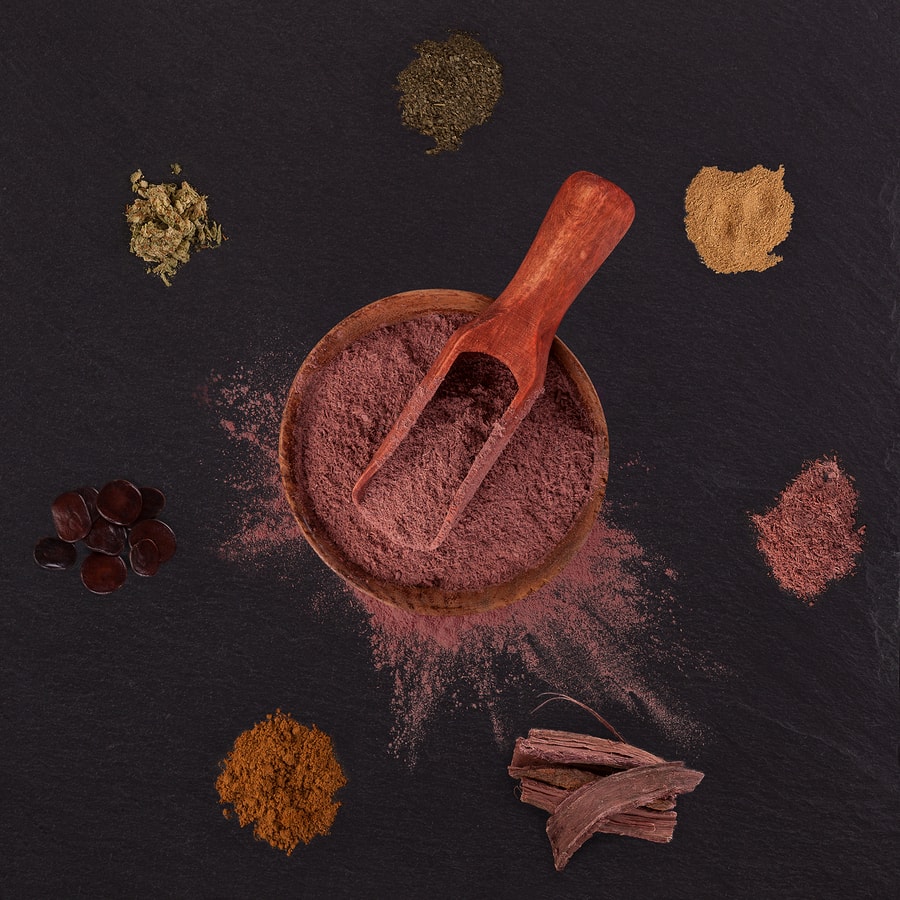 Ibogaine is a psychedelic drug used for drug addiction and spiritual purposes, but it’s banned in the US due to questionable safety and abuse potential. It may also act as a mood enhancer, but the research is limited. Read on to learn the health effects, dosage, and dangers of ibogaine.

Disclaimer: Ibogaine is classified as a Schedule I substance. This means that it is an illegal drug with high potential for harm and no approved medical uses. We highly advise against the use of ibogaine until future studies determine its safety and efficacy in medically-supervised and safe settings. The only aim of this post is to outline the research findings.

Ibogaine is a psychoactive alkaloid derived from the root bark of some plants found in the West African rainforest (Tabernanthe iboga, Voacanga africana, and Tabernaemontana undulata). It has been traditionally used by tribes in Central Africa in ceremonies and religious rituals for its energizing and aphrodisiac properties [1].

Because of safety concerns, ibogaine is currently banned in the United States, Australia, and many European countries, including Belgium, Denmark, and Switzerland. It is legal in several other countries, including Canada and Mexico, where it’s mainly used for addiction treatment [2, 3].

Ibogaine, when consumed, is broken down in the liver and gut wall into noribogaine (12-hydroxyibogamine) [4].

Ibogaine and noribogaine have similar properties, but noribogaine remains in the body longer [5].

Both ibogaine and noribogaine readily cross the blood-brain barrier and are in higher concentrations in the brain tissue compared to the bloodstream [6].

The mechanism of action of ibogaine remains unclear. Some of its effects include:

It illegal to possess or consume ibogaine in the US, Australia, and many European countries. The use of ibogaine can be unsafe, potentially leading to psychotic breaks, changes in heart rate, and even death. Below is a summary of its effects outlined for informational purposes, which in no way supports the use of this substance.

Ibogaine was first introduced as an addiction treatment in 1962 [14].

It reduces opioid use and withdrawal symptoms and stops drug cravings. In contrast to other drug therapies, such as methadone maintenance treatment, even a single dose of ibogaine may lead to opioid detoxification lasting up to 12 months post-treatment [15].

In a recent observational study, a single ibogaine treatment was administered to 14 opioid addicts. In the 12 months following the treatment, opioid use and craving were significantly reduced and in some cases even eliminated [15].

Furthermore, numerous studies of animal models (such as rats and mice) have found that ibogaine exhibits anti-addictive properties against cocaine, morphine, amphetamine, alcohol, and nicotine [17].

Opioid detoxification as a result of ibogaine consumption was achieved in rats, mice, and primates [18].

Purified ibogaine hydrochloride was marketed under the name Lambarene in France (1939-1970) as an antidepressant and stimulator of mental state [15].

In observational trials, ibogaine improved symptoms of depression, anxiety, and obsessive-compulsive disorder for an extended period of time after the treatment [20, 21].

However, recent studies failed to confirm any specific beneficial effects on mood [22].

The following effects of ibogaine have been observed in animal and cell-based studies only and shouldn’t be interpreted as supportive of any health effect or benefit.

Synthetic iboga alkaloids have been proposed as a treatment for obesity in rats. Chronic administration of this substance in rats prevented increases in body weight, decreased fat deposition, and reduced sugar consumption [23].

Additionally, ibogaine has antimycobacterial activity, as shown by the reduction of bacterial cultures of several pathogenic microorganisms [25].

Finally, experiments conducted on human blood cells showed that ibogaine interrupts the replication of retroviruses (such as HIV-1), and blocks the infection process [26].

If you have been exposed to ibogaine and experience poisoning, urgently contact a poison control center near you (call 1-800-222-1222).

Two of the most commonly reported side-effects of ibogaine is involuntary and uncontrollable movement (ataxia) and vomiting [27].

Ibogaine can cause direct damage to the heart muscle or disrupt the electrical activity of the heart. In both humans and animals, high doses of ibogaine decreased the heart rate.

It does so by blocking the activity of an ion channel (ERG potassium channel), which transports electrical signals in the heart cells and regulates the beating of the human heart. This, in turn, results in arrhythmia (abnormal heart rhythm) and a high probability of sudden death [28].

Consumption of ibogaine should be accompanied with heart monitoring since it has been proposed that this arrhythmia could be treated with the use of magnesium and anti-bradycardia pacing [15].

Several deaths have been reported to be attributed to the use of ibogaine. However, some of these fatalities may be due to preexisting medical conditions, such as heart disease or drug use during treatment [29, 28, 30].

There have been 3 reported cases where the use of ibogaine, either for self-treatment of addictions or psycho-spiritual experimentation, resulted in mania [31].

There has been 1 case in which ibogaine worsened symptoms of schizophrenia and induced psychotic episodes [32].

This difference could be due to the dose-dependent mechanism of action of ibogaine. In higher doses (35 mg/kg), ibogaine could trigger epileptic seizures, while in lower doses it generally has an anticonvulsant (anti-seizure) effect [33].

The administration of ibogaine has resulted in neuronal degeneration of Purkinje cells in the rat brain. The Purkinje cells are some of the largest neurons forming the human brain and are located in the cerebellum. This brain toxicity was observed at doses higher than the ones used for invoking its anti-addictive properties (50 to 100 mg/kg) [17].

On the other hand, noribogaine is considered less toxic to the nervous system than ibogaine [34].

However, the neurotoxic effects of ibogaine have only been verified on rats and no research has been done in humans yet.

Substance-drug interactions can be dangerous and, in rare cases, even life-threatening. Always consult your doctor before taking an illegal substance and let them know about all drugs and supplements you are using or considering.

Ibogaine is partly broken down by the CYP2D6 enzyme [35].

This enzyme is responsible for the metabolism of many other substances in the human body. This similar route of metabolism may lead to dangerous drug interactions, which may increase the heart cell toxicity effects of ibogaine and enhance its side effects.

Some substances that could dangerously interact with ibogaine are [35]:

There is no safe dosage for ibogaine, since it is an unapproved drug that poses a significant safety risk. Below is a summary of the dosages used in scientific research, outlined for informational purposes. We highly advise against the use of unapproved substances such as ibogaine.

The doses commonly used for opioid detoxification is in the range of 1 to 2 g, More specifically, it has been administered as a single oral dose in the range of 10 to 25 mg/kg of body weight [12, 36, 37].

Ibogaine was well tolerated with no adverse effects when administered in very low doses of 20 mg in one Phase I study (21 healthy participants) [38].

Similarly, a Phase I study (ascending single-dose, placebo-controlled, randomized, double-blind, parallel group) was conducted to test the safety and toxicity of noribogaine. Single doses of 3 to 60 mg of noribogaine were administered to 36 healthy drug-free volunteers and no adverse effects were observed [5].

Genetic variations found within the gene that expresses the CYP2D6 enzyme affect the enzyme’s activity. In consequence, the metabolism of many drugs of abuse and ibogaine is affected [35].

CYP2D6 is responsible for the metabolism of amphetamine-like drugs, opioids, antidepressants, and numerous other pharmaceutical products [39].

People are divided into different classes of metabolizers, based on the allelic variants in their genome: Ultra-rapid, extensive, intermediate, and poor [40].

In Tabernanthe iboga, ibogaine is more concentrated in the root bark of the plant [2].

Derived from ibogaine, 18-MC is a synthetic iboga alkaloid. Although there are no studies yet testing its safety on humans, data from animal studies are very promising. 18-MC has all the anti-addictive properties of ibogaine [43].

Interestingly, 18-MC does not produce the unwanted neuronal and heart cell toxicity related to ibogaine. Given that 18-MC does not raise extracellular levels of serotonin or bind to the serotonin transporter, it is predicted that it will not have any hallucinogenic properties [44, 45].