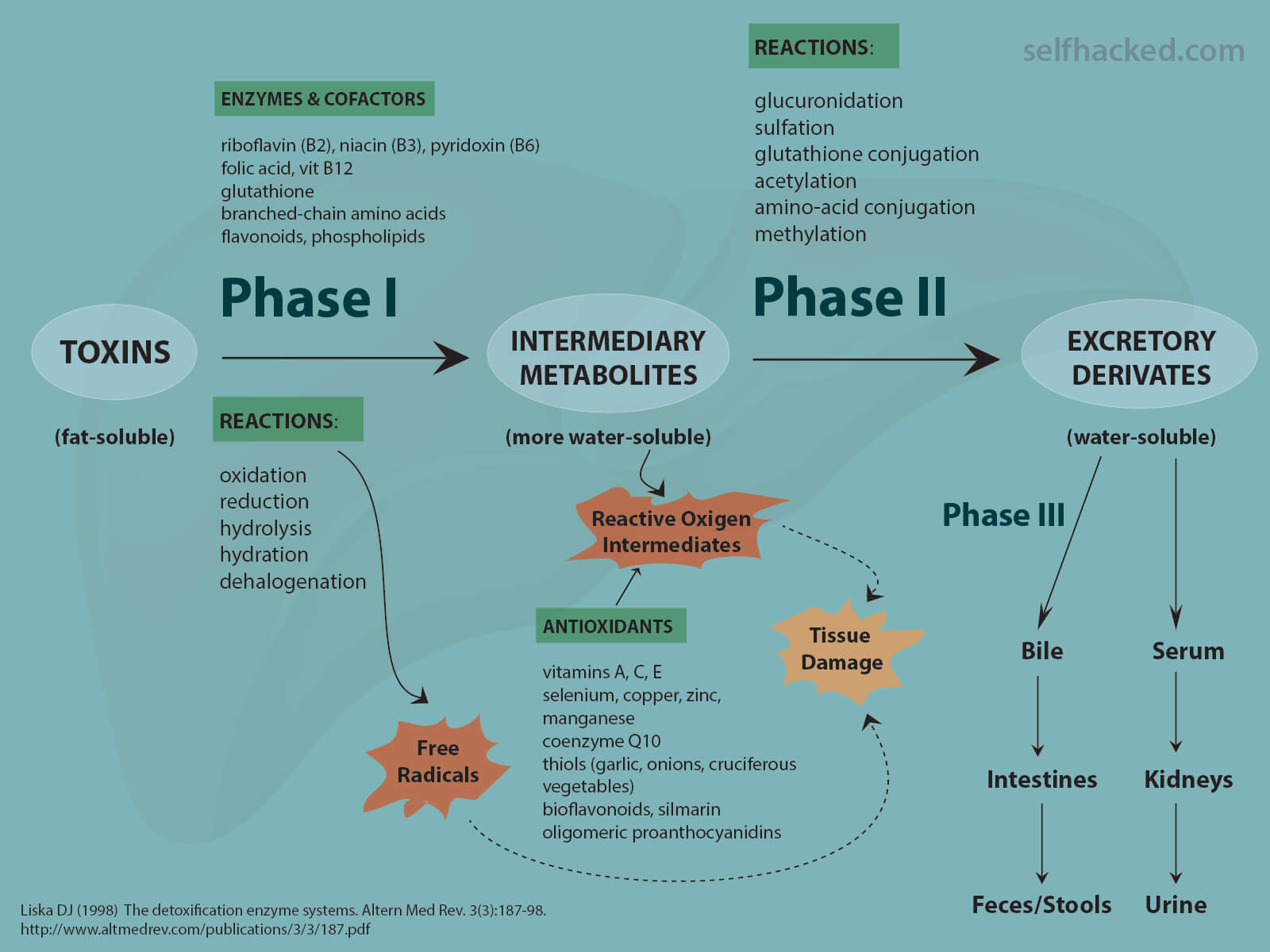 The human body has an amazingly efficient detoxification system, mostly located in the liver. In healthy people, these detoxification processes are in balance, and most of the time function well. However, some diseases, vitamin deficiency, exposure to tobacco smoke, alcohol, and drugs may upset the balance between detoxification enzymes. This post will focus on phase I: the first step to removing toxins from the body. We’ve also compiled a list of natural factors that may increase or decrease the activity of CYPs, a big family of phase I enzymes.

Modern life is based on the use of chemicals. The current count of individual substances is now approaching 100 million, and humans and other species are exposed to a great number of them [1].

Our bodies process and remove these foreign chemicals (xenobiotics) thanks to our efficient detoxification mechanisms. These mechanisms also deal with metabolic products such as excess hormones (endobiotics).

Xenobiotic metabolism usually converts fat-soluble compounds into more water-soluble derivatives that can be easily eliminated from the body [1].

“Enzymes of detoxification” are a big family of enzymes that participate in altering xenobiotics (i.e. foreign compounds), so as to make them either more readily excretable or less pharmacologically active [2].

The detoxification process can be roughly divided into three phases [3]: 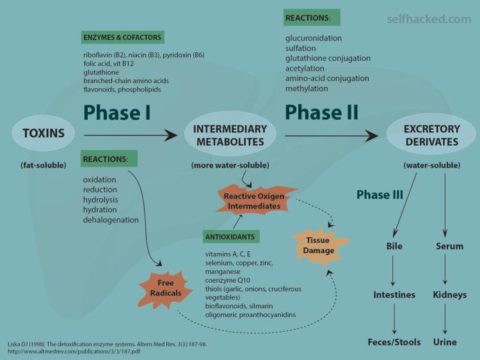 Phases I, II, and III must work in unison for the proper removal of unwanted toxins, drugs, and excess hormones.

These enzymes have broad substrate ranges. They are relatively more concentrated at major points of entry to either the body (liver, lung, intestinal mucosa) or a specific organ (the choroid plexus for the brain). Many also appear to be inducible, i.e. the body responds to exposure to a certain toxin by producing more of the enzyme that degrades it [2].

The liver is the primary detoxification organ, as it filters blood coming directly from the intestines and prepares toxins for excretion from the body [1].

Significant amounts of detoxification also occur in the intestine, kidney, lungs, and brain, with phase I, II, and III reactions occurring throughout the rest of the body to a lesser degree [1].

The enzymes of detoxification are slow compared to other enzymes, but they are present in very large amounts. For example, Phase II glutathione transferases represent 10% of the total protein in the liver [2].

Phase I Detoxification: The First Step

Phase I reactions include oxidation, reduction, hydrolysis and cyclization [4].

Through their unique oxidative chemistry, cytochrome P450 monooxygenases (CYPs) catalyze the elimination of most drugs and toxins from the human body [9].

The Human Genome Project identified 57 human CYPs [4]. However, about 12 hepatic CYPs are responsible for the metabolism of the majority of drugs and other xenobiotics (approximately 93% of the drug metabolism) [1, 4].

Note that although CYPs are detoxification enzymes, these reactions often convert less toxic molecules into more toxic active products. That is where the phase II detoxification steps in.

For example, CYP1A1 can activate some carcinogens [11, 12] while CYP2E1 can activate several liver toxins and contribute to alcoholic liver damage [13].

We differ in our CYPs

More than 2,000 mutations in CYP genes have been described, and certain single nucleotide polymorphisms (SNPs) have been shown to have a large impact on CYP activity [4].

Genetic polymorphisms, which were shown to depend on ethnicity, play a major role in the function of CYPs (especially CYP2D6, CYP2C19, CYP2C9, CYP2B6, CYP3A5, and CYP2A6), and lead to distinct pharmacogenetic phenotypes termed as poor, intermediate, extensive, and ultrarapid metabolizers [14].

Individuals in a population can be stratified according to metabolic ratios of particular CYPs. For example, the most frequent phenotype of CYP2D6 is extensive-metabolizer (78.8%). In other words, 78.8% of us are extensive metabolizers. This group is followed by intermediate- (12.1%), poor (7.6%) and ultra-rapid metabolizers (1.5%) [4].

Research suggests that, for example, a CYP2D6 poor metabolizer should not be administered codeine since the drug would have no effect. Conversely, a CYP2D6 ultra-rapid metabolizer would likely suffer side effects from a normal dosage [4].

In one study, a polymorphism in CYP2C19, CYP2C192, was associated with a 30% increased risk of major adverse cardiovascular events during treatment with clopidogrel. On the other hand, CYP2C1917 was linked with an increased risk of bleeding during clopidogrel therapy [4].

Nonetheless, more clinical research is needed before doctors can modify drug dosage based on each person’s CYP activity. 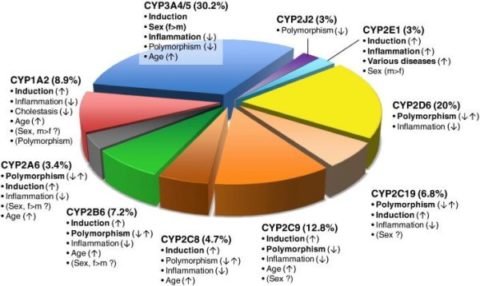 The figure above shows the proportion of drugs metabolized by CYP enzymes. Important variability factors are indicated by bold type with possible directions of influence indicated by arrows. Factors of controversial significance are shown in parentheses [15].

Sex: Most clinical studies indicate that women metabolize drugs more quickly than men. This is particularly the case with the major drug-metabolizing CYP3A4. Analyses have shown ~2-fold higher levels of CYP3A4 protein in female compared to male liver tissue [15].

Age: Studies in the human liver suggest a modest increase in expression and activity of most CYPs during life, particularly CYP2C9 [15].

Disease: Evidence suggests that disease states generally have a negative effect on drug metabolism capacity. During infection, inflammation, and cancer, circulating proinflammatory cytokines – such as IL-1β, TNF-α, and IL-6 – seem to lead to severe downregulation of many drug-metabolizing enzymes [15].

Diet: According to limited research, protein deficiency inhibits, while protein-rich diet increases CYP activity [18]. A high-carbohydrate diet was shown to decrease CYP activity in one older study, but present-day studies would need to confirm this link [19].

On the other hand, a diet high in saturated fats was suggested to activate CYP2E1, the enzyme that was shown to be upregulated in diabetes [17].

A Word of Caution

It’s one of the reasons why supplement-drug interactions can be dangerous and, in rare cases, even life-threatening. Remember, CYP enzymes metabolize most drugs.

Theoretically, all substances that lower CYP activity may slow the metabolism of drugs and increase their blood levels. This may lead to an increased risk of toxicity or serious side effects.

On the other hand, substances that increase CYP activity may speed up the metabolism and removal of drugs. This can reduce the drug’s blood levels and make it less effective.

Always consult your doctor before supplementing or making any major changes to your diet or lifestyle. It’s important to let them know about all drugs and supplements you are using or considering.

Additionally, have in mind that detox supplements have not been approved by the FDA for medical use. Supplements generally lack solid clinical research. Regulations set manufacturing standards for them but don’t guarantee that they’re safe or effective. Speak with your doctor before supplementing.

Herbs, Foods, and Other Compounds

Many of the effects described below have only been studied in animals or cells. For nutrients lacking clinical data, CYP interactions in humans are unknown.

Note that many foods appear to act as both inducers and inhibitors of CYP enzymes, based on their concentration or composition (curcumin/turmeric, black tea/theaflavins, soybean) [32]. while other foods increase particular CYP enzymes while decreasing others.

It is also important to know that elevated Phase I activity is not always a good thing. As Phase I enzymes produce toxic and carcinogenic compounds, you want them to be in balance with Phase II enzymes.

These receptor interactions are highly experimental and proper human data are lacking: