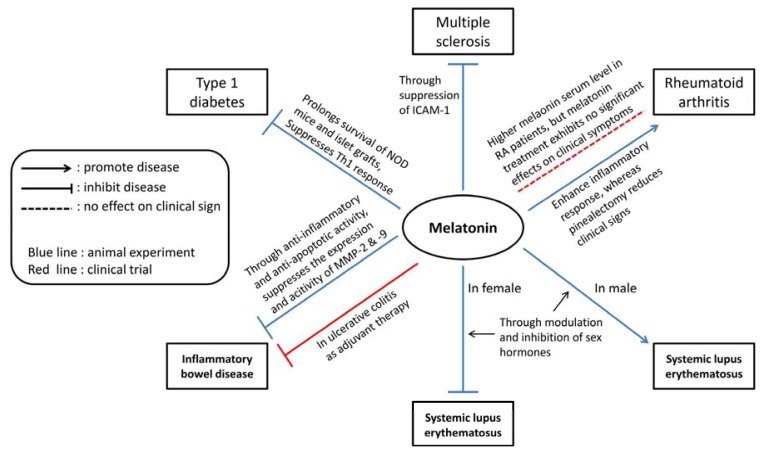 Melatonin plays many important roles in the immune system and inflammation control. Scientists have observed abnormalities in melatonin function in a range of autoimmune conditions. Read on to learn more about the effects of melatonin on immunity and inflammation and discover the potential side effects of supplementation.

Please note: the beneficial roles of melatonin as a naturally occurring hormone may not imply the same benefits of melatonin supplementation.

Melatonin receptors are present in a wide variety of immune cells [1]. 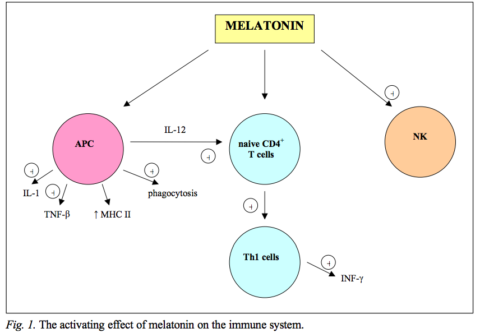 Melatonin plays an important role in the immune system. The membranes of immune cells such as CD4+ T cells, CD8+ T cells, and B cells all have melatonin receptors [2].

Melatonin can either activate or suppress immune cells [2].

Th1 cells play a key role in the development of inflammatory responses. They help with the production of proinflammatory cytokines like IFN-y and IL-2 [1].

Depending on its concentration, melatonin promotes both Th1 and Th2 responses. In mice, low doses of melatonin increased Th1 cytokine levels. In contrast, high doses decreased the pro-inflammatory cytokines [1, 3].

According to preliminary research, melatonin blocks the release of the following cytokines and inflammatory substances: 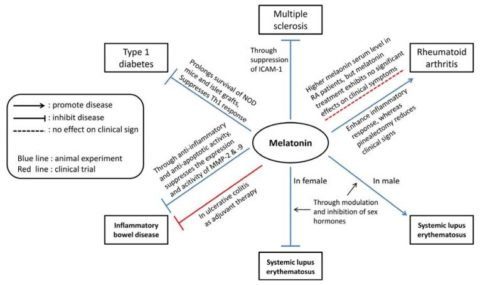 Connection Between Melatonin and the Immune System

In non-obese diabetic mice (an animal model of type 1 diabetes), chronic administration of melatonin increased survival and delayed the onset of diabetes [7].

Type 1 diabetes is a Th1-cell-dominant disease, while melatonin shifts the immune response toward Th2 cells [2].

By reducing TNF-α and IFN-γ production, melatonin may protect against β cell destruction [2].

Surgical transplantation of pancreatic islet grafts (cluster of cells) that produce insulin is a potential therapy for type 1 diabetes. However, the immune system might attack or reject the transplants. Melatonin might be able to prolong graft survival [2].

In diabetic mice, melatonin administration decreased Th1 cells and increased anti-inflammatory IL-1o cytokines. This inhibits the autoimmune response to the islet transplants. On average, the islet grafts survived for 17 days with melatonin treatment in comparison to 7 days in untreated mice [8].

Multiple sclerosis (MS) is a disease that affects the central nervous system. Immune cells wrongly attack the neurons’ myelin sheaths. This causes pain, fatigue, weaknesses, and may even cause vision loss [2].

Multiple sclerosis patients excrete an abnormal amount of melatonin metabolites in the urine at night. This indicates a dysregulation of melatonin production [2].

Melatonin deficiency plays an important role in the fluctuation of multiple sclerosis symptoms, fatigue, and mood disorders in patients [9].

Th17 cells also contribute to multiple sclerosis. Melatonin suppresses Th17 cells, which may help stop the progression of the disease [10].

In rats with MS, oral melatonin administration significantly reduced paralysis severity. These effects were due to the suppression of intracellular adhesion molecule-1 production in the spinal cord [11].

Crohn’s disease and ulcerative colitis are referred to as inflammatory bowel disease (IBD). Characteristics of IBD include the accumulation of immune cells in the intestinal tissues and inflammation in the intestines [2].

The immune cells that accumulate in the intestinal tissues include B cells, T cells, neutrophils, macrophages, and dendritic cells. Activation of these cells causes inflammation and increases proinflammatory cytokine levels [2].

However, the same study found that long-term administration of melatonin worsened colitis symptoms and caused intestinal cell death in mice [13].

Melatonin administration may help treat animal models of lupus. However, its effects may depend on the timing of administration and the gender of the subject [1, 16].

However, in the same study, melatonin treatment worsened lupus symptoms in male mice. It increased inflammatory cytokines and autoantibodies [18].

When melatonin reduces testosterone, it increases pro-inflammatory cytokines. This might be the cause of melatonin’s negative effects in male mice [19].

In one study, 75 patients either received 10 mg of melatonin (considered a high dose) at night or a placebo for six months. Melatonin increased ESR and neopterin, which are indicators of inflammation [21].

However, there was no significant difference in rheumatoid arthritis symptoms and proinflammatory cytokine levels in melatonin and control groups [21].

In one study, researchers surgically removed the pineal gland, which produces melatonin, in mice with RA. These mice had significantly reduced levels of IL-1β and IL-6 in their blood and brains, which indicated lower inflammation [22].

Melatonin supplements are generally safe and well-tolerated. Oral supplementation of melatonin at 240 mg and injections at 500 mg are possibly safe for healthy individuals [24, 25].

The most important thing to remember about melatonin supplementation is the timing. Inappropriate timing of melatonin administration can cause hormonal problems, daytime sleepiness, and desensitization of melatonin receptors [27].

Administration throughout the day may also contribute to bipolar disorder and depression symptoms [26].

Additionally, melatonin activators (like Ramelteon or Agomelatine) should not be used in patients with liver failure, kidney failure, alcohol addiction, or high fat levels [28].

Melatonin and bright light are known to improve the mood and symptoms of Alzheimer’s patients. However, without the additional bright light, it may have a negative effect on the mood of such patients. It may also lead to an increase in aggressive behavior [29].

Due to potential drug interactions, caution and medical supervision are warranted before combining melatonin with [30, 31, 32, 33, 34]:

9 Beneficial Effects of Oxytocin + 39 Ways to Increase it