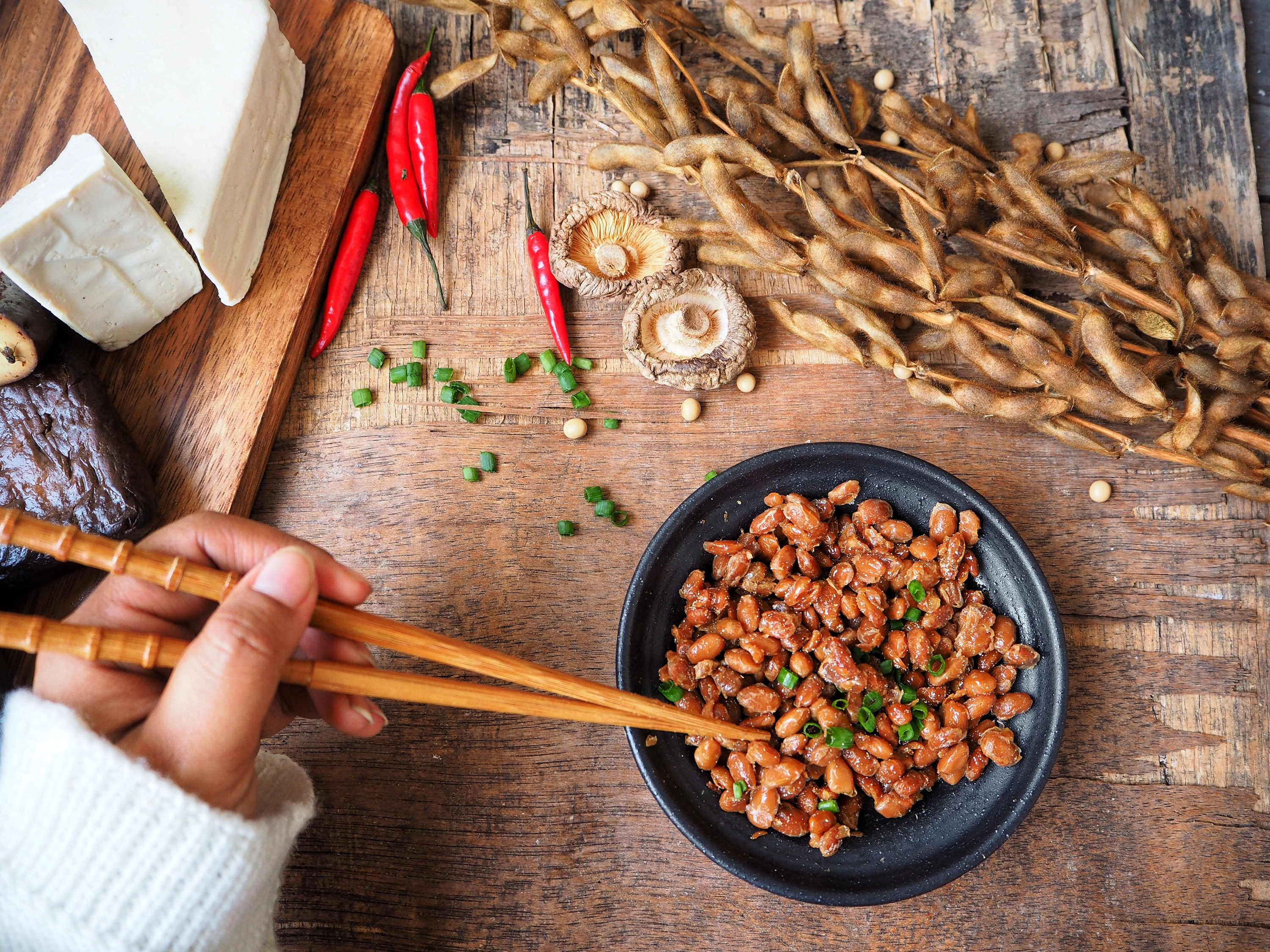 Nattokinase is an enzyme present in nattō, a traditional fermented Japanese food. It may help dissolve blood clots, which gives it therapeutic potential in heart disease. Read on to learn more about the health benefits of nattokinase.

Nattokinase, also known as natto extract (subtilisin NAT or orokinase) is an enzyme in nattō, a fermented soybean product. It is produced when the soybeans are cooked and later fermented by adding the bacteria, Bacillus subtilis natto [1].

It was discovered and extracted from nattō in 1987 when nattō was found to dissolve artificial fibrin (an insoluble protein involved in the formation of a blood clot). It has the highest anti-clotting (fibrinolytic) activity compared to other enzymes, making it a promising avenue for research in patients with heart disease [2].

Another advantage is that it can be either be consumed as a dietary supplement or orally administered [3].

Nattokinase has been extensively studied in Japan, Korea, and China. However, only recently has this enzyme been recognized for its powerful clot-dissolving properties in Western medicine [4].

Despite its name, nattokinase is not a kinase enzyme but instead belongs to the serine protease family of enzymes, which work to break down other proteins. The mechanisms of action studied in animals or human cells, are as follows. In cell studies, nattokinase [1, 5, 6]:

Nattokinase supplements have not been approved by the FDA for medical use. Supplements generally lack solid clinical research. Regulations set manufacturing standards for them but don’t guarantee that they’re safe or effective. Speak with your doctor before supplementing.

In 2 clinical trials, one with 79 and the other with 86 subjects with high blood pressure, the group which received a dose of nattokinase once a day for 8 weeks had reduced blood pressure (systolic and diastolic) compared to the placebo group. One of the studies found the reduction in blood pressure was more significant in male subjects [7, 8].

Nattokinase inhibits the angiotensin-converting enzyme, which causes narrowing of blood vessels. Inhibiting this enzyme may be involved in reducing blood pressure [9].

Nattokinase has the potential to benefit patients with thrombosis (formation of a blood clot inside a blood vessel).

In a study of 12 healthy adult males, a single dose of nattokinase degraded fibrin and decreased levels of coagulation factors, which are involved in blood clotting. Its effect lasted for a long time (over 8 hours) compared to other enzymes (tissue plasminogen activator, urokinase) [11].

In rats, its clot-dissolving activity was stronger than that of plasmin or elastase [12].

In rats with thrombosis, nattokinase decreased blood clots better than the saltwater solution. In addition, a high-dose of nattokinase was as effective in reducing blood clots as a known anti-clotting agent (vermis kinase) [13].

In rats, a high dose of nattokinase fully inhibited thrombus formation. This was similar to the effects of aspirin, a well-known blood thinner. Nevertheless, the lack of adverse effects associated with its consumption suggests that it could be an effective treatment for improving blood flow [6].

Blood clots were experimentally induced in dogs. Oral consumption of nattokinase dissolved the blood clots and restored normal blood flow in only 5 hours [14].

Researchers are currently investigating whether nattokinase has other health benefits. The potential benefits in this section have produced positive results in at least one clinical trial, but these studies are small, contradictory, or otherwise limited. Talk to your doctor before supplementing with nattokinase for any reason.

Daily nattokinase supplementation was remarkably better at reducing plaque size (36.6% plaque reduction) that causes hardening of the arteries (atherosclerosis) compared to statin treatment (11.5% plaque reduction) in 82 patients. The mechanisms by which it reduces cholesterol levels and decreases plaque size that results in the prevention of artery hardening may be different from each other [16].

High von Willebrand Factor (vWF, a mediator released by damaged blood vessels that increases the risk of forming clots) levels are associated with the risk of stroke [18].

In a study of 79 hypertensive patients, vWF was reduced by 15% in the group who took nattokinase, compared to the placebo group that had no consistent change throughout the 8 weeks. However, vWF levels didn’t decrease in males who consumed the supplement. This suggests a gender-specific effect of nattokinase in reducing vWF levels [7].

No clinical evidence supports the use of nattokinase for any of the conditions listed in this section. Below is a summary of the existing animal and cell-based research, which should guide further investigational efforts. However, the studies listed below should not be interpreted as supportive of any health benefit.

In cells, it also degrades amyloid fibrils, which are protein aggregates commonly found in cases of Alzheimer’s disease [20].

In cells, nattokinase efficiently degraded parts of gliadin, a component of gluten. Hence, it may be a potential new treatment for intolerance to gliadin, known as celiac disease [21].

Many benefits of nattokinase were studied in cells or animals. Even though the findings were significant, these benefits may or may not apply to humans. For that reason, more studies with humans are needed.

There is no safe and effective dose of nattokinase because no sufficiently powered study has been conducted to find one. That being said, multiple clinical studies have produced beneficial results using a variety of doses.

Nattokinase activity is measured in FU, the number of fibrinolytic units (FU).

Based on human studies, 2,000 FU has produced the greatest cardiovascular and antithrombotic benefits [7, 22, 23].

In Combination with Other Supplements

There is not sufficient evidence to recommend nattokinase in combination with any other supplements. To avoid unexpected interactions, talk to your doctor before using nattokinase.

It’s important to consider that red yeast rice itself may show these results, but that possibility was not explored in this study since it did not have a group of red yeast rice only.

Taking nattokinase with red yeast rice can also reduce uric acid and thus, it may be helpful in reducing inflammation, gout, and kidney stones [17].

Nattokinase is considered generally safe to consume as food. This is based on a lack of reported side effects from human clinical trials and the fact that it has been a part of the Japanese diet for thousands of years [7, 10, 25].

Further human studies are needed to fully establish a safety profile. Talk to your doctor before supplementing to avoid adverse events and unexpected interactions.

Nattokinase binds to heparin, a glycosaminoglycan used as an anticoagulant drug. Depending on the length of the heparin chain, nattokinase can interfere with heparin’s functions. It can also bind to other glycosaminoglycans [26].

Since nattokinase may cause blood thinning, it should not be paired with other blood thinning agents such as aspirin or warfarin. This can increase the risk of brain hemorrhage in patients who have small vessel disease [27].

There is also a risk of clotting mechanical heart valves if nattokinase is substituted for warfarin [28].

Blood Tests
4.6
24
Why High Homocysteine is Bad + Should You Decrease It?
Conditions
1
19 Hacks for Living With Lupus
Supplements (other)
3
CBD Oil for Arthritis: Does It Work & How Can You Use It?