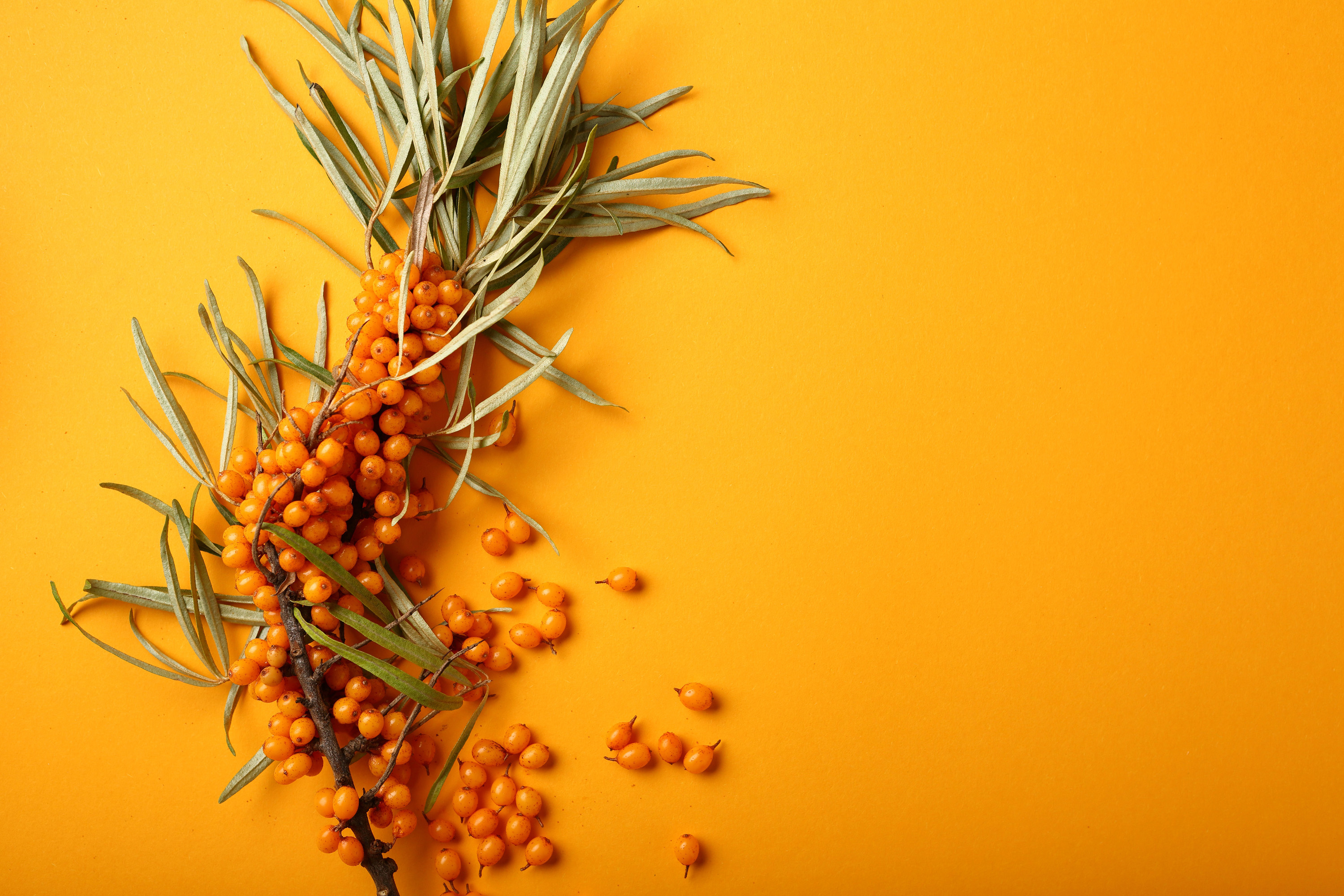 A common plant used in traditional Chinese medicine, as well as in jams for its sweet flavor, sea buckthorn (Hippophae rhamnoides) is a thorny, berry-filled bush found in Central Asia and Europe. Thanks to its antioxidant and anti-inflammatory compounds, it has potential applications such as promoting skin health, improving dry eye syndrome, and preventing heart disease. Read on to discover the potential benefits of using this plant in your diet and as an extract.

What Is Sea Buckthorn?

Sea buckthorn (Hippophae rhamnoides) is a berry-filled bush from Europe and Central Asia that has long been used in traditional medicine to prevent aging, promote heart health, and clear up the skin.

Although the evidence is limited, preliminary results suggest that some of these benefits could be backed by science. The high abundance of antioxidant chemicals, vitamins, and flavonoids may be responsible for its effects.

Flavonoids have a high free radical scavenging activity, which contributes to sea buckthorn’s protection against oxidative stress. This may help with wounds, ulcers, inflammation, and stress-induced conditions [6].

The following purported benefits are only supported by limited, low-quality clinical studies and animal and cell-based research. There is insufficient evidence to support the use of sea buckthorn for any of the below-listed uses until larger, more robust clinical trials are conducted. Remember to speak with a doctor before taking sea buckthorn supplements and never use them as a replacement for approved medical therapies.

In a clinical trial on 151 burn patients, soaking their bandages with sea buckthorn increased pain relief and sped up skin regrowth around the wound [8].

In a small trial on 12 healthy people, an oral sea buckthorn berry extract quickly increased the mobilization of stem cells involved in tissue repair and regeneration [9].

3) Reducing the Riks of Heart Disease

In a small trial on 23 healthy men, sea buckthorn extract lowered blood fat levels after a meal. Its high fiber and polyphenol content were considered responsible for this effect [15].

However, sea buckthorn berry extract increased blood levels of flavonoids (quercetin, kaempferol, and isorhamnetin) but had no effect on blood fats in 2 trials on over 200 healthy people [17, 18].

In rats fed a high-sugar diet, the extract lowered blood pressure and reduced heart damage through its antioxidant activity [19, 20].

Oral sea buckthorn oil prevented platelets from clumping together, possibly reducing the risk of heart disease from blood clots, in a small trial on 12 people [5].

In a clinical trial on 86 people, oral sea buckthorn oil fixed cold weather-induced dry eye symptoms by reversing the high level of particle concentrations on the tear film in the eye [21].

However, another trial on 100 people found that the oil had no effect on the fatty acid proportion of this tissue. The authors proposed that the improvements due to sea buckthorn oil might be due to its effects on inflammation and eyelid (meibomian) gland development [7].

The fatty acids in sea buckthorn seed and pulp oils reduced stress-induced dry eyes in mice by increasing tear secretion, with pulp oil having a much stronger effect [22].

In a clinical trial on 120 children with indigestion (functional dyspepsia), a treatment with sea buckthorn extract improved appetite (by increasing the levels of leptin and neuropeptide Y), and increased stomach emptying and digestive function better than a drug for stomach and bowel motility (domperidone). This resulted in their increased growth and development [23].

In a clinical trial on 50 people with liver cirrhosis, sea buckthorn extract reduced tissue scar (measured as blood levels of laminin, hyaluronic acid, and type III and IV collagen) and improved liver function (measured as total bile acids) in 30 of the patients [24].

In mice with liver cirrhosis, sea buckthorn extract also reduced the severity of the disease. Seed oil was more effective than berry oil [25].

In chickens poisoned with the toxin aflatoxin B1, sea buckthorn berry oil prevented the buildup of the toxin in the liver and reduced markers of inflammation, cell death, and cancer (COX-2, Bcl-2, and p53) [26].

In a pilot study on 28 people with kidney disease (idiopathic nephrotic syndrome), an herbal preparation with sea buckthorn (as an add-on to conventional therapy) improved symptoms of swelling, lack of appetite, and low urination, as well as reducing inflammatory cytokines in the blood and proteins in the urine after 3 months [27].

In Japanese quails, sea buckthorn leaf powder protected kidney tissues from the damage caused by the toxin ochratoxin A [28].

In a clinical trial on over 200 elderly people (both healthy and with Alzheimer’s disease), a formulation with the extracts of sea buckthorn leaves and berries, Bacopa monnieri plants, and Dioscorea bulbifera bulbils improved word recall, attention span, mood, and inflammatory and oxidative markers [29].

In a clinical trial on over 100 postmenopausal women with vaginal dryness, itching, or burning, oral sea buckthorn oil improved the symptoms by protecting the vaginal lining from thinning [31].

In a small trial on 18 healthy people, sea buckthorn berries reduced and delayed blood glucose and insulin spikes after a meal with added sugar [32].

In a clinical trial on over 250 healthy volunteers, sea buckthorn berry extract reduced the levels of an inflammatory marker (CRP) [34].

In rats with arthritis, an injected dose of sea buckthorn extracts greatly reduced the amount of swelling, inflammation, and immune cell proliferation in the joints [35].

In a clinical trial on 30 children with type 1 diabetes, a dietary supplement with sea buckthorn and blueberry slightly improved their antioxidant status (by increasing glutathione peroxidase activity) [38].

No clinical evidence supports the use of sea buckthorn for any of the conditions listed in this section. Below is a summary of the existing animal and cell-based research, which should guide further investigational efforts. However, the studies should not be interpreted as supportive of any health benefit.

In another rat study, sea buckthorn bark extract accelerated the repair of the stomach lining. It also reduced the size and severity of ulcer damage compared to the control group [42].

In horses, sea buckthorn berry and pulp extract only prevented ulcers in those housed in stalls and fed intermittently [43].

RH-3, a constituent of sea buckthorn extract, protected rats against whole-body radiation. The extract led to an 82% survival rate (compared to a 0% survival rate in the control group) [44].

Sea buckthorn extract boosted chicks’ immune systems and decreased the effects of a toxin that suppresses the immune system (T-2). Fiber glucomannan combined with sea buckthorn had an additive effect [47].

Note, however, that these are very preliminary results that haven’t been replicated in humans and even in animals. Further research is needed to determine if sea buckthorn may be of any use against the infections caused by these microorganisms.

Below, we will discuss some preliminary research on sea buckthorn’s potential anticancer effects. It’s still in the animal and cell stage and further clinical studies have yet to determine if its extracts may be useful in cancer therapies.

Do not under any circumstances attempt to replace conventional cancer therapies with white sea buckthorn or any other supplements. If you want to use it as a supportive measure, talk to your doctor to avoid any unexpected interactions.

In mice, sea buckthorn berry extract blocked the growth of tumors in the stomachs and skin of mice. It promoted the activity of anticancer proteins that limit abnormal cell growth and promote cell death [51].

Sea buckthorn juice slowed tumor growth in mice organs and extended their lifespans from an average of 195 days to 270 days [52].

Sea buckthorn juice reduced the number of genetic abnormalities caused by the chemotherapeutic drug cisplatin in both mice sperm and bone marrow cells [53].

Keep in mind that the safety profile of sea buckthorn is relatively unknown, given the lack of well-designed clinical studies. The list of side effects below is not a definite one and you should consult your doctor about other potential side effects based on your health condition and possible drug or supplement interactions.

The use of sea buckthorn may slow blood clotting and should, therefore, be avoided in patients with cuts, deep injuries, or with a scheduled surgical procedure [5].

Chronic use of sea buckthorn may cause yellow staining of the skin, as seen in the case of a 45-year-old that used the product regularly for 6 months [54].

Not enough evidence is available for the use of sea buckthorn as a medicine during pregnancy. Use caution or contact your doctor and be wary of any hypersensitivities or allergies you might experience while consuming the extract of this plant.

The berries can be bought in their pure form. They can also be made into juice, which is filtered to produce oil. The berries contain many of the antioxidants of the plant [1, 55].

The leaves contain many flavonoids and can be made into a tea [1, 55].

The seeds can be made into highly concentrated oil. This oil is an ingredient of many cosmetic products like skin cream and soap [1, 55].

The opinions expressed in this section are solely those of sea buckthorn users, who may or may not have medical or scientific training. Their reviews do not represent the opinions of SelfHacked. SelfHacked does not endorse any specific product, service, or treatment.

Most people used sea buckthorn products for their purported benefits on skin health. They often reported that the supplements helped clear, soften, and tone the skin.

Other users reported an improved overall feeling of wellbeing.

In some cases, the users complained that sea buckthorn extract didn’t work for them.