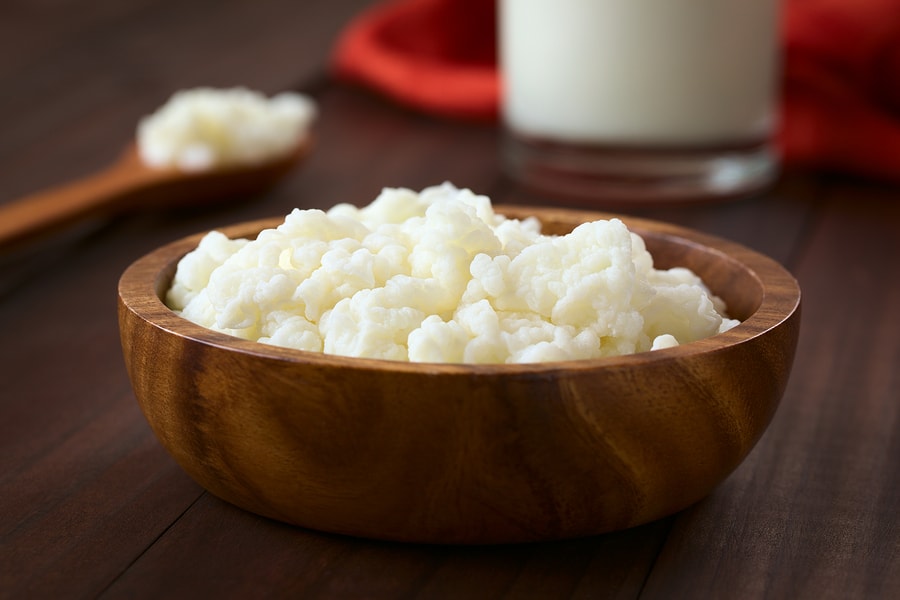 Kefir is a probiotic drink made by the fermentation of milk or water with kefir grains containing yeasts and bacteria. It may help modulate the gut flora and relieve constipation. Read on to learn more.

Kefir is a fermented beverage made with milk and kefir grains, originally from the Caucasus mountains between Asia and Europe. The word “kefir” originates from the Turkish word “keyif,” which means “feeling good” [1].

Kefir grains contain several species of bacteria and yeasts. They are small, yellowish-white in color with the appearance of miniature cauliflowers [2].

Kefir is best known as a probiotic, which helps digestion [3].

However, kefir is under investigation for a number of other potential benefits, including:

How To Make Kefir?

Traditionally, kefir is made by adding kefir grains (which contain microbial cultures) to cow’s milk. It is also made by using other types of milk, such as goat, sheep, donkey, soy, rice, or coconut [13, 28].

It is fairly easy to make milk kefir at home by following the steps below [30]:

The kefir grains can either be stored in the fridge for later use or can be used directly to make more milk kefir.

Kefir’s taste depends on the milk used, but it is usually slightly sour and creamy.

The nutritional value of kefir varies depending on the milk or water used, kefir grains, and the way it is produced and stored. A cup of low-fat milk kefir is around 110 calories.

Since kefir grains come in different varieties, their components may vary from country to country and from grain to grain. Kefir can contain numerous probiotic bacteria and yeasts [36, 3].

Kefir grains may contain a variety of bacteria, including:

The yeasts in kefir grains may include:

Researchers have investigated the effect of kefir and its probiotic bacteria in cell studies. They have observed a number of effects on the immune system, gut flora, and fat metabolism.

Kefir’s effects on gut bacteria include:

Kefir’s effects on weight and metabolism include:

Kefir is considered very safe for most people to consume as food, but it has not been approved for any health purpose or medical claim. If your immune system is compromised for any reason, talk to your doctor before drinking kefir.

In a study on 82 patients, kefir and triple antibiotic therapy (amoxicillin, clarithromycin, and lansoprazole) were more effective in killing Helicobacter pylori, which causes stomach infections and ulcers, than the antibiotics alone [65].

In 76 children with gut infections, bifidokefir (kefir containing Bifidobacterium bifidum) restored the gut bifidobacteria in 73.4% and lactobacilli in 82% of patients to their normal levels within 7 days [7].

In mice, kefir increased the number of bacteria that are beneficial for gut health (lactic acid bacteria). It also reduced harmful bacteria (Enterobacteriaceae and Clostridia) [62].

Kefir prevented the growth of Campylobacter jejuni in chicks, one of the most common causes of food poisoning [66].

Kefir protected mice against a gut infection caused by the parasite, Giardia intestinalis [67].

In mice, kefir reduced gut inflammation by increasing immune defense (boosting immunoglobulin A antibodies) and reducing inflammation (by increasing IL-10 and decreasing IFN-γ and IL-1β). Thus, it could be used to combat gut infections [68, 69].

In fact, the bacteria and yeasts in kefir stopped bacterial growth that causes gut infections, including Escherichia coli, Salmonella, and Bacillus cereus [70].

One major issue with probiotics is that stomach acid kills some strains before they can reach the intestines, rendering them inactive. But the probiotics from kefir were able to survive in a stomach-like acidic environment [38].

In a pilot study on 20 adults with constipation, kefir increased the frequency and consistency of stools, reduced the use of laxatives, and improved bowel movements when consumed for 4 weeks [6].

In 42 adults with mental and physical disabilities, 2g of kefir (lyophilized) for 12 weeks provided complete relief from constipation in 9 participants and reduced symptoms in most. Kefir could be used as a safe remedy to prevent constipation [74].

Kefir can also increase digestive enzymes. It helped to break down and digest proteins in rats [75].

The following purported benefits are only supported by limited, low-quality clinical studies. There is insufficient evidence to support the use of kefir for any of the below-listed uses. Kefir is considered very safe for the majority of people, but it should never be used to replace something your doctor recommends or prescribes.

In a study of 15 adults with lactose intolerance, kefir improved lactose digestion and tolerance as well as yogurt did. It also reduced bloating and stomach pain. Raspberry-flavored kefir has a weaker effect than the unflavored kefir [9].

A beverage made of eggshell and milk kefir had less lactose and more calcium than regular milk. Thus, milk kefir could be easier to digest by lactose-intolerant people – both because of the lower lactose content and the beneficial probiotics [79].

The fermentation process in milk kefir decreases the lactose content in the milk, which makes it easier to digest. Kefir made with soy or coconut milk, or even water, is lactose-free [30, 28, 13].

In mice with high cholesterol, kefir decreased fat buildup in the arteries. This reduces the risk of clogged, hardened arteries (atherosclerosis) [84].

In a 6-month pilot study, kefir consumption increased the hip bone density, the blood levels of parathyroid hormone (PTH), and calcium in 40 patients with osteoporosis [24].

In a study of 60 patients with type 2 diabetes, milk kefir decreased hemoglobin A1c (HbA1C), and glucose blood levels. Hence, it could be added to the diet to help with diabetes [25].

In one study on mice with diabetes, a combination of soy and goat milk kefir reduced blood glucose levels and increased antioxidant enzymes (glutathione). In fact, the combination has a stronger effect than kefir made just from soy or goat milk. Goat milk-soy kefir may also increase the activity of the pancreas to improve glucose control [87].

In 22 healthy adults, kefir blocked the growth of Streptococcus mutans, a bacteria that causes tooth decay, as effectively as the typical fluoride rinse [88, 89].

No clinical evidence supports the use of kefir for any of the conditions listed in this section. Below is a summary of the existing animal and cell-based research, which should guide further investigational efforts. However, the studies listed below should not be interpreted as supportive of any health benefit.

Kefir peptides reduced the inflammatory compounds (TNF-α, IL-6, and IL-1β), which were elevated in mice with non-alcoholic fatty liver disease [64].

A 70% kefir gel sped up the wound healing and protected the skin connective tissue in rats infected with the bacteria Staphylococcus aureus. This bacteria is one of the most common causes of skin infections [5].

In fact, the effects of Kefir on reducing inflammation and boosting gut immunity cannot be isolated from its ability to combat allergies. Kefir shifts the immune response from Th2- to Th1-dominant, which is key in reducing allergic response [4].

Microorganisms in kefir grains stop the growth of the following bacteria:

Kefir’s effects on cancer cells in the lab include:

Most studies investigating the benefits of kefir are performed on animals and cells, while the human studies included a small number of participants.

More human studies are needed to confirm its effectiveness.

Although both kefir and yogurt are probiotics with many health benefits, there are some differences and similarities between them.

More studies have investigated the potential benefits of yogurt than kefir for bone health [125, 126].

Although yogurt is beneficial for gut health and the immune system, kefir has been more effective in improving gut microbiota, fighting infections, and boosting immune function [130, 131].

Yogurt improved memory and brain function in men. No studies have yet examined the effects of kefir on the brain, except for one study in which kefir improved sleep in chemotherapy patients [132, 106].

Kefir consumption may cause [9]:

However, most participants did not report any side effects [4].

Make sure your kefir is adequately fermented before you consume it. Although well-fermented milk kefir reduces lactose intolerance, you may wish to avoid dairy kefir altogether if you are lactose intolerant. Rather, you can choose kefir made from soy, coconut, or other non-dairy sources [79].

Since kefir balances the immune response, it should be used cautiously with immunosuppressive drugs, including [136]:

Although kefir may help balance the gut microbiome during chemotherapy, it should be taken cautiously. Some lactic acid bacteria and bifidobacteria in kefir are resistant to chemotherapy drugs. Other strains in kefir may be killed by chemotherapy [137, 138, 139].

Kefir may contain small amounts of alcohol (0.5%, similar to non-alcoholic beer). People who take Disulfiram for alcohol dependence may want to avoid it. Concurrent use could cause adverse effects, such as nausea, vomiting, headaches, and heart problems [140].

When kefir drinks are prepared industrially, the fermentation processes are generally safe with a very low risk of contamination [141].

Too much washing or improper processing can change the microbiota of the kefir grains and cause contamination by harmful bacterial species (Bacillus or Micrococcus) [142, 143].

If you aren’t used to consuming fermented foods and drinks, you may want to start with a small amount (about 100 mL) and then increase the amount once your body adjusts to drinking it.

However, some users reported side effects such as infections, rash, constipation, sore throat, and nausea when using kefir.

One user felt that kefir did not help with his lactose intolerance.