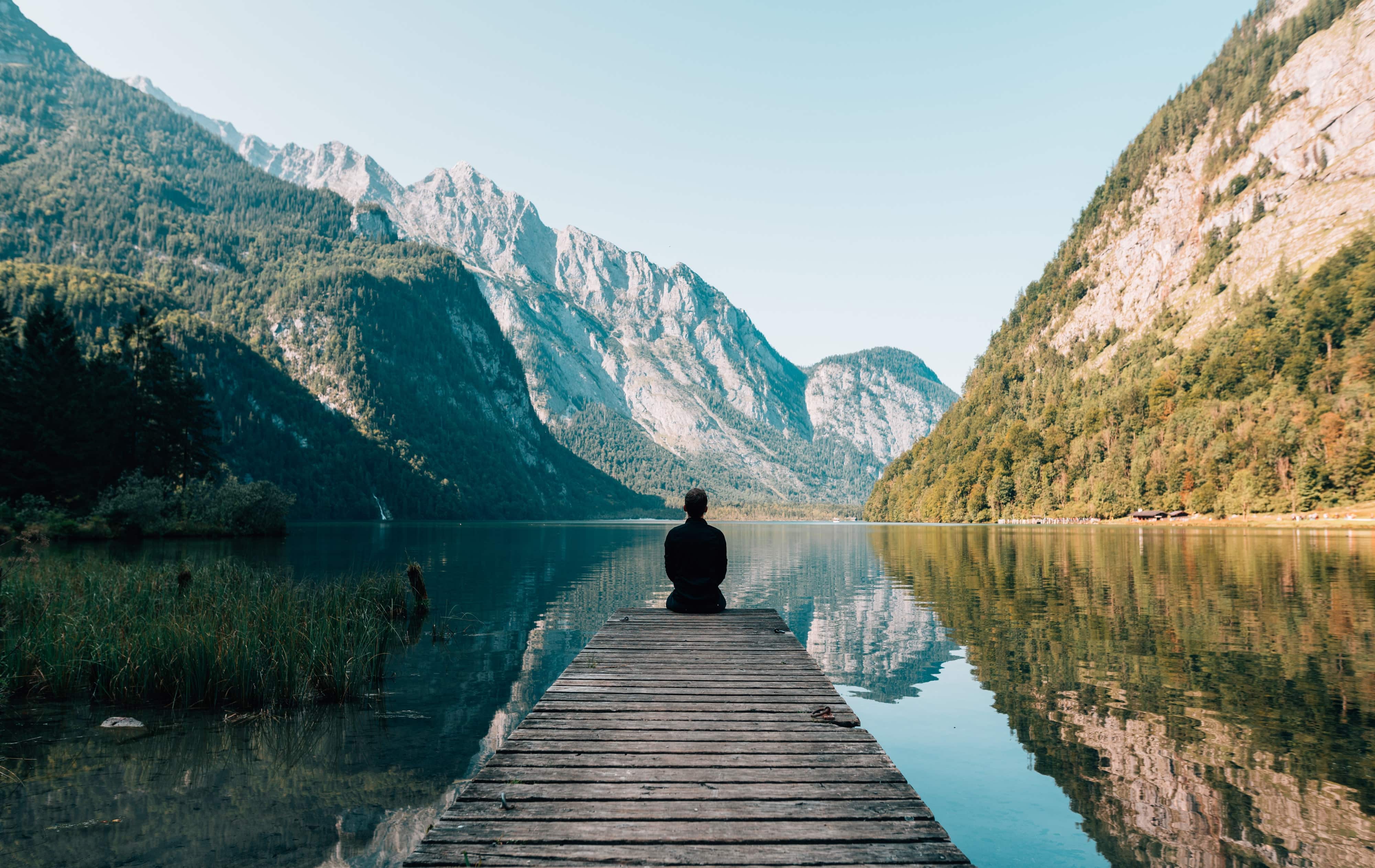 Scientists believe that GABA might be the mind’s natural calming signal. It’s thought to help people get good sleep, relax, and wind down. Read on for a deep dive into the science of GABA, its function, receptors, and whether GABA supplements are worth the hype.

GABA is the main inhibitory neurotransmitter in the brain, which means that it functions as the mind’s brakes. It slows down and stops the firing of brain cells and brings the mind to a state of relaxation and calmness [1].

GABA counters the main excitatory neurotransmitter, glutamate. The brain has a smart way to balance activation and relaxation, noise and silence, yin and yang. It does so through glutamate and GABA [1].

We can think of GABA and glutamate in the brain as if on a scale:

As always, balance is key. On the extreme side, studies suggest too much glutamate can cause seizures and mania. But an overly stimulated GABA system, such as from high doses of drugs like Valium, can cause extreme sedation and even coma. In fact, some general anesthetics are hypothesized to bring about a state of deep unconsciousness by enhancing GABA [2, 3, 4].

One theory suggests that when GABA and glutamate are in harmony, the brain can function optimally [5, 6, 7, 8].

However, many factors can throw this balance off. In our modern, urban world and fast lifestyles, GABA might often take the toll.

Some studies suggest that when the mind is constantly activated, under stress, or anxious, glutamate increases, GABA levels drop, and so does stress resilience. Have in mind that these are complex scientific theories, and GABA is just one part of the equation [5, 6, 7, 8].

Researchers believe that GABA reduces the rate at which neurons fire, which is important for normal, healthy, daily functioning. But it may be especially relevant when neurons in certain parts of the brain become too excited, which has been linked with anxiety, headaches, muscle tension, chronic pain, and Parkinson’s disease symptoms [9, 10].

It’s questionable how GABA acts on cognition since it seems to be relaxing, not stimulating. On the other hand, we know that people cannot focus when stressed and anxious. Poor cognition is one of the main symptoms of mental health disorders like schizophrenia and anxiety [11, 12].

Other scientists believe GABA might be a sort of peace-promoting neurotransmitter, since some studies have linked its activity with better emotional intelligence, easier socialization, and increased empathy. These links are still inconclusive, however [13, 14].

“Calming” GABA should be in balance with “exciting” glutamate for optimal brain and mental health, limited studies suggest.

How the Brain Produces GABA

Many parts of the brain are naturally high in GABA. The concentrations of GABA in some brain regions are > 1000 times higher than of other neurotransmitters in any other part of the brain [15].

Once GABA is made, it’s released to achieve its effects. Afterward, neurons quickly take GABA back inside to be stored and used again next time. Neurons seem to selfishly store GABA, where its amounts are 200x higher than outside the cells, in the brain’s bloodstream [15].

GABA is higher in some brain areas than in others. It seems to be concentrated in the amygdala, which is activated in response to perceived danger.

What’s the difference between them and why does it matter?

Scientists suspect that GABA-A activation does not have the same effects as GABA-B activation in the brain. GABA-enhancing drugs often target one receptor subtype more – such as to induce rapid relaxation and sleepiness (GABA-A) [17].

Examples of substances that activate GABA-A are alcohol, benzodiazepines like Valium, general anesthetics, and kava [23, 24, 1].

GABA-A receptors are fast-acting and likely induce relaxation and sleep.

GABA-B are slow-acting and more complex. When activated, the wakefulness-boosting cAMP stops being produced. Some researchers posit that this may be a reason why GABA may help with sleep in the long-term [1, 25].

Based on the available research, GABA-B activity may be important for [26]:

Some researchers think that GABA-B activation may be less sedative and less hypnotic. They hypothesize it might be beneficial for cognition and memory, since some drugs that activate GABA-B like Phenibut are nootropics, but more high-quality human studies are needed [31, 32].

Baclofen and phenibut both activate GABA-B. They are being researched for muscle spasms, anxiety, and addictions. Phenibut is not approved in the US [33, 34].

GABA Supplements: Do They Work?

GABA supplements are widely available and found in large health and grocery stores. However, GABA supplementation probably does not affect GABA levels in the brain because GABA can’t cross the blood-brain barrier [35].

In theory, these supplements may affect GABA in the gut, circulation, and nerves, but these effects have not been proven and little is known about how fast GABA is metabolized.

Many people are claiming to have used Pharma-GABA and experienced beneficial effects.

Asian manufacturers claim that this form of GABA, produced through a fermentation process using a strain of lactic acid bacteria, is superior to other GABA supplements. They state that pharma-GABA is “pure” and that it can cross the blood-brain barrier.

Pharma-GABA has been approved by the FDA as a food ingredient–not as a dietary supplement-and it is quite expensive [36].

However, no evidence exists to show that Pharma-GABA (or any other GABA) can cross into the brain.

Studies using brain imaging would need to determine this, and none have been carried out to this date. Theoretically, PharmaGABA might have indirect effects – via the gut and nerves along the gut-brain axis – but this has not been proven either [36].

Despite popular claims, there’s no evidence to suggest that any GABA-containing supplements can penetrate the blood-brain barrier.

If your goal is to increase GABA to improve your stress-related issues – including those of insomnia or anxiety – it’s important to talk to your doctor, especially your mental health is significantly impacting your daily life.

Remember that the existing evidence does not suggest that low brain GABA causes cognitive or mental health problems. Complex disorders like anxiety always involve multiple possible factors – including brain chemistry, environment, health status, and genetics – that may vary from one person to another.

Additionally, changes in brain chemistry are not something that people can change on their own with the approaches listed in this article. Instead, the factors listed here are meant to reduce daily stress and support overall mental health and well-being.

Therefore, you may try the additional strategies listed below if you and your doctor determine that they could be appropriate. Read through the approaches outlined here and discuss them with your doctor before trying them out. None of these strategies should ever be done in place of what your doctor recommends or prescribes.

You may also want to read through this post that focuses just on factors that may increase GABA.

If stress, anxiety, or other issues are significantly impacting your life, it’s important to talk to a doctor. GABA supplements should never replace approved medical therapies.

Other Factors that May Increase GABA

No clinical evidence supports the approaches listed below to increase brain GABA.

Below is a summary of the existing animal and cell-based research, which should guide further investigational efforts. However, the studies listed below should not be interpreted as supportive of any health effect.

Make sure to speak with your doctor before taking any supplements. Let them know about any prescription or over-the-counter medication you may be taking, including vitamins and herbal supplements.

Remember that dietary supplements have not been approved by the FDA for medical use. Supplements generally lack solid clinical research. Regulations set manufacturing standards for them but don’t guarantee that they’re safe or effective.

Herbs like magnolia bark and valerian have been suggested to increase GABA based on animal experiments, but human data are lacking.

A couple of synthetic drugs have been made by modifying GABA and enabling it to cross the blood-brain barrier. They should only be used with a prescription in countries in which they have been approved.

New brain imaging technology recently made it possible to measure neurotransmitter levels in the brain. However, this technology is still new and more studies need to clarify all the scenarios in which GABA levels are low and the brain regions involved.

This article focused on GABA receptors, their function, and the issues marketed GABA supplements face. Aside from the research outlined in this post, other studies focused on how fluctuations in brain GABA might impact health.

GABA functions as the brain’s main calming neurotransmitter. Like yin and yang, GABA is always in harmony with glutamate. GABA relaxes and glutamate excites brain cells. According to one theory, a balance of these two neurotransmitters contributes to brain health and emotional balance.

GABA acts through its receptors: GABA-A and GABA-B. The former are fast-acting and likely responisible for relaxation, while the latter might ease muscle tension and make people more empathic.

Although GABA supplements have become increasingly popular, evidence is lacking to suggest any form of GABA can cross into the brain. Until proper clinical trials come out, the use of these supplements remains unproven.