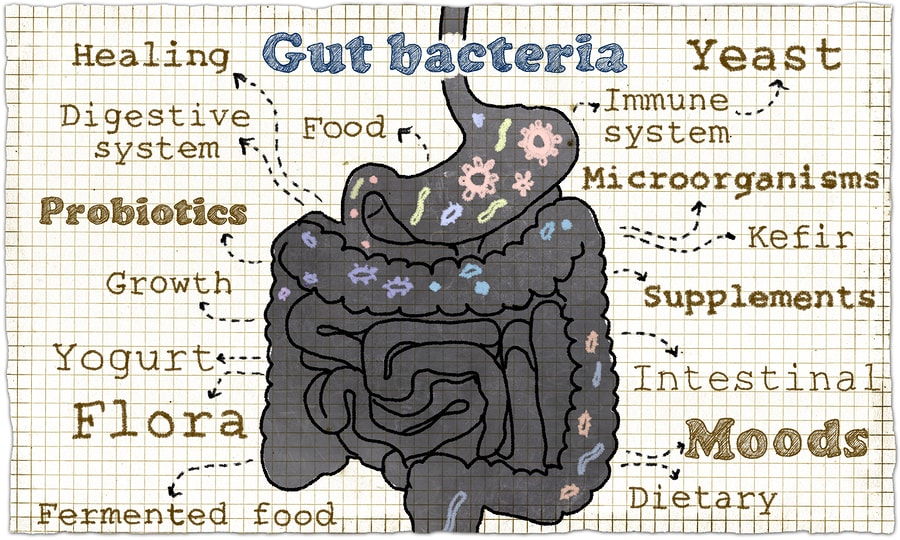 We share our bodies with our gut microbes. They can make us thin or fat, healthy or sick, happy or depressed. That is why many researchers and doctors believe that is important to keep our microbiome well balanced. Read on to learn about the many factors that can affect the human gut flora.

Our gut microbiome is extremely important. The bacteria we carry have various roles in our bodies and affect our lives in a multitude of ways. That is why it’s important to keep them in balance. In this post, we review the various factors that have an impact on our gut bacteria.

To learn more about the human gut microbiome and how it shapes our bodies and our minds, check out this post:

Factors that Affect the Gut Microbiome

What we eat has a great effect on our gut bacteria. If the good bacteria species in foods or supplements do not have the appropriate fuels or conditions to grow in your gut, they may not colonize. Therefore, your diet has a larger effect on the gut microbiota composition than probiotic supplementation [1].

The western diet is high in red meat, animal fat, and sugar and low in fiber. This tends to promote the growth of Bacteroides [5].

Prevotella are the most abundant bacteria in most vegetarians [5].

One study investigated what would happen when people ate either plant- or animal-based diets exclusively for 5 days. Their bacteria changed within the first day. However, bacteria also reverted to the original state 2 days after the diet was over [6, 7].

Prebiotics are non-digestible plant fibers (complex carbohydrates) that nourish the gut flora. They [9]:

Prebiotics include oligo- and polysaccharides, inulin, resistant starch, and pectin.

Prebiotics promote the growth of beneficial bacteria, such as Bifidobacteria and Lactobacilli in humans [10, 11, 12, 13, 14].

They also help restore gut microbiota after a course of antibiotics or illness [33, 34].

Foods that May Improve Gut Microbiota

Foods that May Have Negative Effects on Gut Bacteria

Stress can disturb gut microbiota, and this can, in turn, cause various disorders and diseases.

A study addressed the effects of stress on pregnancy (measured as self-reported stress, elevated cortisol levels or both). Of the 56 infants observed in the study, those born to mothers who were stressed during pregnancy had disturbed gut microbiota. They had more harmful bacteria, and lower levels of ‘good bacteria’, such as lactic acid bacteria and Bifidobacteria. They were also more prone to gut disorders and allergic reactions [70].

A similar situation was found in animals, where stress in pregnancy altered the gut microbiota of the offspring [71, 72, 73].

Exercise may increase the number of ‘good’ bacteria and enrich gut microbial diversity [75].

A study showed that elite rugby players (40 subjects) had richer gut microbiota compared to carefully chosen non-athletic controls (46 subjects). In particular, there was a greater diversity of Firmicutes (including the beneficial Faecalibacterium prausnitzii) [76].

A high abundance of Prevotella (≥2.5%) was associated with the duration of exercise during an average week in 33 cyclists [79].

Interestingly, early-life exercise in rats was more beneficial compared to exercise in adulthood [75].

While low-intensity exercise has been found to be beneficial, some researchers believe that endurance exercise may have a negative effect [75].

Military-type training had a negative impact on gut microbiota and increased gut inflammation in 73 young soldiers [81].

Nine people had increased Firmicutes/Bacteroidetes ratio after two days of partial sleep deprivation. Sleep deprivation caused a shift in gut bacteria associated with metabolic disturbances (that can lead to metabolic syndrome and diabetes) [82].

Shift work increases the risk of obesity, metabolic syndrome, and type 2 diabetes, and perturbations in gut bacteria are one of the main suspects in this relationship [85].

Antibiotics are used to treat or prevent infection. However, they can cause unintended damage by depleting beneficial gut bacteria [88].

Antibiotics can dramatically decrease the richness of the gut community [1].

In some cases, after prolonged antibiotic treatment, full restoration of the gut microbiota is no longer possible [88].

A 7-day therapy with clindamycin, which has a strong and broad activity, decreased the diversity of Bacteroides in 4 subjects, compared to another 4 people who didn’t take the drug. The diversity was not restored to its original level even two years after therapy [89].

These effects can also be transferred to the next generation. In a study of 606 infants, depleted microbiota was found in infants born to mothers treated with antibiotics [90].

Furthermore, certain ‘bad bacteria‘ may take advantage of the disturbance caused by antibiotics and multiply [88].

To minimize the risk of gut dysbiosis, it is best to use narrow-spectrum antibiotics whenever possible [88].

Finally, in some conditions where gut microbiota is already disturbed, antibiotics can actually help. They can restore gut microbial balance by decreasing ‘bad bacteria’. For example, in two studies of a total of 211 IBS patients, rifampin resolved the overgrowth of bad bacteria [91, 92].

The overuse of PPIs shifts the gut microbiome towards a less healthy state. It may increase the risk of gut infections. PPIs also seems to favor Streptococcal growth – these are harmful bacteria that may cause ulcers [93].

In a study of 1815 individuals, 211 PPI users had lower bacterial diversity and 20% of their bacteria was significantly altered compared to non-users [94].

NSAIDs cause small intestine damage and ulcers. The damage may be worse in those with imbalanced gut bacteria.

In a DB-RCT with 20 healthy volunteers, probiotics decreased NSAID-induced gut damage, presumably by improving the composition of gut bacteria [95].

Metformin is a drug that improves type 2 diabetes symptoms. It increases beneficial bacteria such as A. muciniphila (a butyrate-producer) and Lactobacilli [96, 97].

However, a study of 199 diabetic patients showed that metformin also increased Escherichia, which can be harmful [98].

When people stopped smoking, their gut microbiota changed once again. Basically, their microbiota became more similar to that of obese people. This may partly explain the weight gain which happens after smoking cessation [100, 101].

Mice exposed to airborne pollution had an altered gut microbiome. They had decreased butyrate levels and developed acute and chronic gut inflammation [104].

A meta-analysis of 22 studies and a total of 562 patients showed that gastric bypass surgery changes gut microbiota. After the surgery, it resembles the microbiota of leaner people [106].

However, there are also possible side effects. A study of 51 patients showed that gastric bypass surgery increased TMAO by two-fold [107]. TMAO is a bacterial product that increases the risk of heart disease.

Fecal microbiota transplantation is a relatively new procedure. It transfers gut bacteria from a healthy person into a patient with a disease/disorder. The goal is to completely restore a healthy gut microbiome [88].

There is a limited number of studies but the results so far are promising.

This procedure has been successful in 15 out of 16 patients with a Clostridium difficile infection [108].

Promising results were also observed in IBD. According to a meta-analysis of 9 studies, 22% of patients with ulcerative colitis and 60% of patients with Crohn’s disease were symptom-free after the procedure [88].

People in different parts of the world have different bacteria [4]. However, most of these differences can be attributed to their diets.

Eubacterium dominates in Russia. Russian people, in general, have more bacteria that can degrade resistant starch [109, 113].

Japanese people have more Bifidobacteria and Clostridium. They also have gut bacteria that can break down carbohydrates from algae. These are not found in other people [109, 114, 115].

People from Burkina Faso eat a high-fiber diet. According to one study, they may have four times more butyrate and propionate compared than Europeans [116].

Hadza nomadic tribes of Tanzania have less inflammatory factors in their gut microbiota than Italians [117].

Isolated Amerindians, who had no previous contact with Western people, have the highest diversity of gut bacteria ever reported [118].

People living in rural environments tend to have richer (and healthier) microbiota. This is also mostly diet-related [119].

A study following 24 newborns, showed that infants delivered by C-section had depleted microbiota. They had lower Bacteroidetes compared to vaginally delivered children (24 children) [121].

A study in 60 children showed that the differences in microbiota between vaginally and C-section delivered babies persist up to 7 years of age [123].

Finally, in a study of 606 infants, formula-fed infants had lower Bifidobacteria compared to breastfed infants [90].

People with older siblings have higher gut microbial diversity in early childhood (a study of 114 infants) [124].

These infections can cause long–term changes in gut bacteria, that persist long after the infection has been cleared [126].

Post-infection gut dysbiosis can result in other disorders, such as IBS or insulin resistance.

The composition of our gut bacteria is sex-specific, and gender differences in gut bacteria tend to emerge during puberty [133].

In mice, gut microbiota undergoes a change in males but not in females. Castrating mice during puberty eliminates sex differences in adult mice. This shows the role of testosterone in organizing gut microbiota [134].