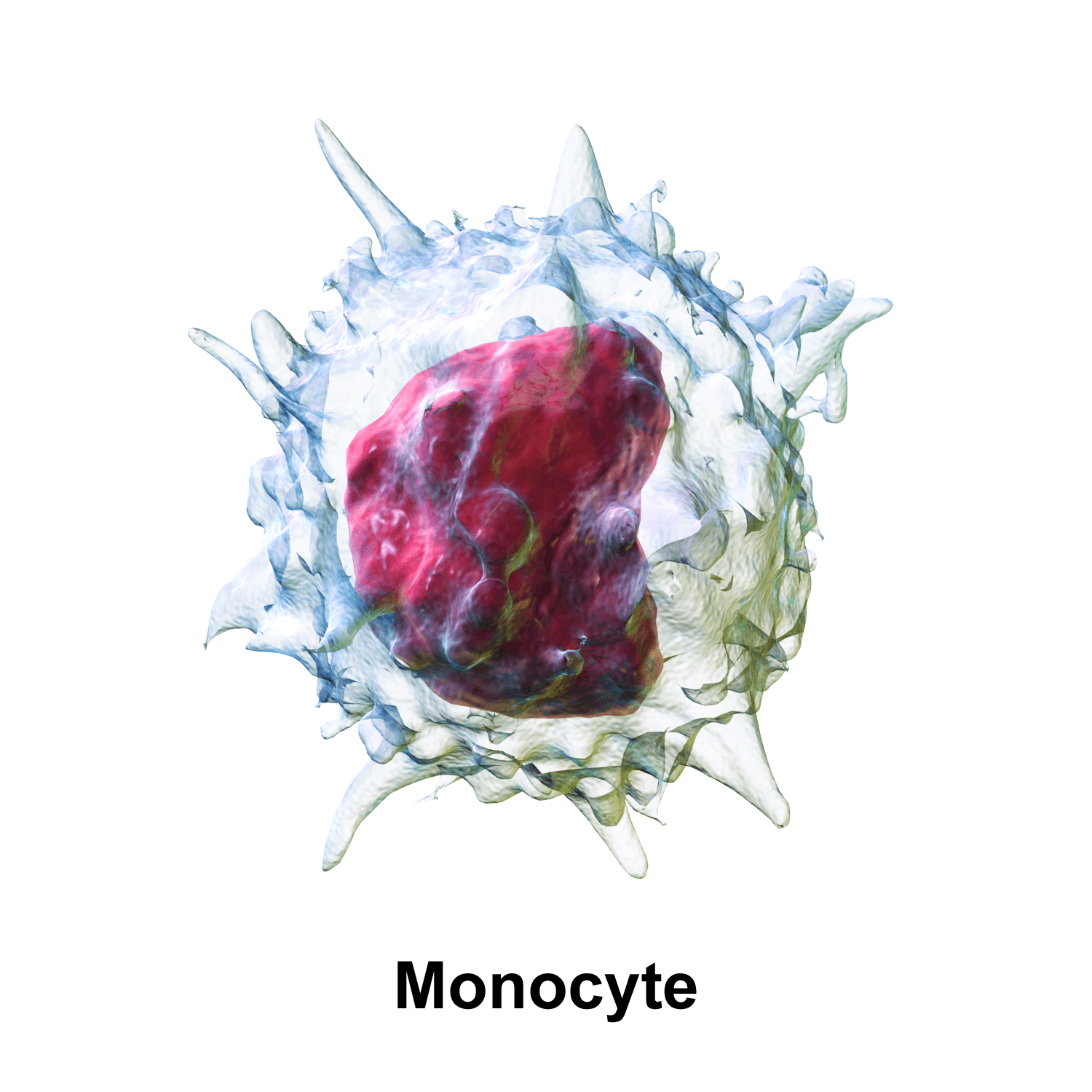 Monocytes are the largest of all white blood cells and play an important role in the defense against germs and in inflammation. What do high levels mean? What factors can decrease them? Learn more here.

Monocytosis is a condition in which the number of monocytes circulating in the blood is increased to more than 0.8×109/L in adults.

Causes shown here are commonly associated with this symptom. Work with your doctor or other health care professional for an accurate diagnosis.

Monocytosis most commonly occurs during and after chronic inflammation or infection [24].

However,several other conditions can also be associated with monocytosis, such as heart disease, depression, diabetes, and obesity [25, 26, 27].

The conditions most commonly associated with high monocyte levels are:

High monocyte levels may also be linked to:

Few symptoms are considered to be caused by monocytosis itself. Instead, according to many researchers, symptoms arise from the diseases associated with monocytosis [26]. These symptoms include:

The main causes of high monocytes (monocytosis) are chronic inflammation and infections. Symptoms depend on the cause and may include fever, pain, and swelling.

How Are High Monocytes Linked to Health?

Monocytes and macrophages are involved in the development and worsening of atherosclerosis (hardening of the arteries) that can lead to heart disease and stroke [37].

Monocytes accumulate in blood vessels and contribute to the development and rupture of atherosclerotic plaques that block blood vessels [38, 39, 40].

As atherosclerosis progresses, the number of monocytes in the blood tends to rise [41].

Atherosclerosis, heart disease, and stroke are associated with increased monocyte and macrophage levels in the blood.

A clinical study found no link between diabetes and the number of circulating white blood cells, but monocytes were significantly more numerous in people with complications of diabetes [42].

Some researchers believe that monocytes may be responsible for harmful inflammatory complications in diabetes. Studies have shown that monocytes secrete TNF-alpha, IL-6, and IL-1 in both type 1 and type 2 diabetic patients; these proinflammatory molecules are thought to promote blood vessel diseases (like atherosclerosis) [43, 44, 45, 46, 47, 48].

In a separate study of elderly Korean men and women, monocytosis was associated with an increased risk of cardiovascular and cancer-related death [24].

This connection has not been researched well enough to state for certain that monocytosis can predict mortality rate. However, current research has largely supported the association [25, 24, 26].

Several hormones have been associated with increased monocytes.

Testosterone injections increased the number of monocytes, granulocytes, and large lymphocytes in mice [54].

Monocytosis is a condition that requires diagnosis and treatment by a medical professional. Talk to your doctor before attempting any strategies to decrease monocyte count.

Regular exercise is anti-inflammatory. In one study, monocytes significantly decreased after a six-week course of moderate-intensity cycling in overweight women who hadn’t been regularly exercising.

In obese people, weight loss was accompanied by a significant reduction in monocyte and neutrophil counts. The decrease in circulating monocytes correlated with better insulin sensitivity [21].

Regular consumption of omega-3 fatty acids—found in oily fish such as mackerel and salmon or fish oil supplements—may protect against atherosclerosis and heart disease [56].

People taking fish oil supplements were less likely to have inflammation in the blood vessel walls caused by monocytes. This effect was not as pronounced in people already taking medication to treat peripheral artery disease [57].

Some research suggests that the Mediterranean diet could reduce inflammation caused by monocytes [58, 59].

The Mediterranean diet is comprised of foods such as seeds, nuts, vegetables, fruits, whole grains, and monounsaturated fats from olive oil.

Alcohol influences monocyte function. In one study, the monocytes of people who drank a moderate amount of alcohol were less active, even after only a single drink. Monocytes exposed directly to alcohol also had a reduced inflammatory response to proinflammatory compounds [60, 61].

We do not recommend increasing your alcohol intake for the purpose of curtailing inflammation. Talk to your doctor about more appropriate anti-inflammatory strategies.

You can lower your monocytes and inflammation by keeping your weight in check, exercising regularly, and following a Mediterranean-like diet.

Other Factors That Decrease Monocytes

According to one study, estrogen (and possibly also progesterone) decreases monocyte count by preventing monocytes from reproducing. This mechanism could explain why cell-mediated immunity appears to drop during pregnancy [64].

Infliximab is an immune-suppressing drug prescribed for the treatment of inflammatory diseases such as Crohn’s, ulcerative colitis, and rheumatoid arthritis [65, 66, 67].

Estrogen, progesterone, cortisol, and new immune-supressing drugs lower inflammation and reduce monocytes. Do not under any circumstances take prescription medication without a doctor’s supervision.

The conditions most commonly linked to high monocytes (monocytosis) are chronic infections and inflammation. In turn, having too many monocytes may worsen inflammation and clog your blood vessels. Strategies that may be of interest to people with high monocytes include regular exercise, weight loss, and a Mediterranean-style diet.

What is Transferrin + High & Low Levels