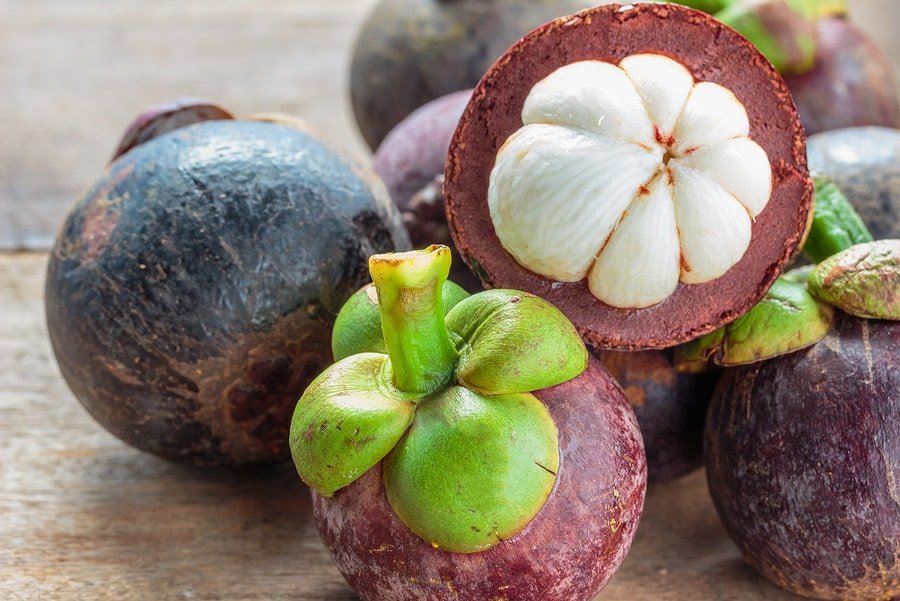 Mangosteen is a fruit rich in antioxidant compounds. Preliminary research suggests it may help with gum disease, diabetes, and skin conditions, as well as to lose weight. Read on to learn more about its potential benefits.

The mangosteen (Garcinia mangostana) is a small purple tree fruit grown in Southeast Asia. In the 19th century, the mangosteen was given the nickname “the queen of fruits,” due to a rumor that they had been particularly sought by Queen Victoria [1].

Fresh mangosteen fruit has been commonly enjoyed for its flavor in Asia for centuries, and the fruit is beginning to gain popularity in the West as well [2].

There are unique nutritional benefits being studied from chemicals extracted from the mangosteen fruit’s rind.

The product Meratrim, of which mangosteen extract is one component, has been used in some studies of weight loss and is a patented extract [3, 4].

In a clinical trial on 25 people with gum disease, a gel with 4% mangosteen fruit reduced bleeding, plaque buildup, and the salivary count of one of the microbes responsible for the disease (Treponema denticola). Another mangosteen gel had similar effects when used as an add-on to periodontal treatment in another trial on 31 people [5, 6].

Although the results are promising, the evidence is limited to support the use of mangosteen in people with gum disease. Larger, more robust clinical trials are required to confirm its effectiveness.

Raw mangosteen outperforms some of the best natural antioxidants. The evaluation of the antioxidant capacity for common supplements based on a standardized test on oxygen radical absorbance capacity (ORAC) is determined and reviewed periodically by the USDA.

Both the peel and the flesh contain multiple antioxidant compounds such as phenolic acids, anthocyanins, xanthones (especially alpha-mangostin), and tannins [9, 10].

In a clinical trial on 60 healthy people, the daily consumption of a mangosteen drink improved the antioxidant status of the blood by 15%. Another trial on 20 healthy people given a xanthone-rich mangosteen liquid product found similar results and identified alpha-mangostin, vitamin B2 and vitamin B5 as the main bioavailable compounds [11, 12].

An extract obtained from mangosteen flesh showed antioxidant activity in test tubes and blood cells, and was well tolerated by 11 healthy volunteers [13].

Again, the results are promising but 3 small clinical trials are insufficient evidence to attest to the antioxidant effects of mangosteen in humans. More studies on larger populations are needed to validate these preliminary findings.

In a clinical trial on 60 healthy people, the daily intake of a mangosteen drink reduced an inflammatory marker (CRP) by 46%. Mangosteen products also reduced this biomarker in 2 other trials on 56 healthy and 122 obese people [11, 14, 15].

A mangosteen extract standardized for alpha-mangostin activated the SIRT1 pathway, which is known to limit inflammation by reducing the production of the major inflammatory hub NF-kB [16, 17].

Mangosteen extract is also an AMPK activator, which may help reduce inflammation [18, 19].

All in all, mangosteen seems to lower the inflammatory marker CRP but there is insufficient evidence to conclude that it may help people with inflammatory issues. More clinical trials are needed to determine its potential therapeutic application.

In a clinical trial on 20 healthy, middle-aged women, an antioxidant cream with the extracts of mangosteen, green and white tea, and pomegranate improved age-related skin roughness [20].

Nanoparticles loaded with alpha-mangosteen improved acne after applying them on the skin for 4 weeks in a small trial on 10 people [21].

A single clinical trial and some research in animals and cells cannot be considered sufficient evidence to back the antidiabetic effects of mangosteen. Further clinical research is warranted.

The AMPK activation caused by mangosteen extract may assist in weight loss [18].

On the other hand, activation of the 5HT2A receptor in the hypothalamus is also associated with reduced appetite, whereas blocking it may contribute to obesity. The chemical component alpha-mangostin can block the activation of this receptor and may theoretically cause an increased appetite [28, 17].

However, mangosteen extract alone failed to alleviate fatigue during physical exercise in a small trial on 12 healthy people [30].

Two small trials with opposite conclusions are clearly insufficient to support this use of mangosteen. More clinical trials are needed to shed some light on this potential benefit.

No clinical evidence supports the use of mangosteen for any of the conditions listed in this section. Below is a summary of the existing animal and cell-based research, which should guide further investigational efforts. However, the studies should not be interpreted as supportive of any health benefit.

In another study on brain cells, the extract normalized currents in the brain and prevented cell death [35].

A xanthone isolated from mangosteen (garcinone D) promoted brain cell regeneration by stimulating the proliferation of a type of stem cells that develop into brain cells [36].

Almost all of the studies conducted are with animals. The few clinical trials were often small and had low quality. Mangosteen may have a similar health profile to consuming blueberries or other fruits with a similar composition, but research is lacking. Larger, more robust clinical trials are needed to confirm all potential benefits.

Bilberry vs. Blueberry: What Is the Difference?