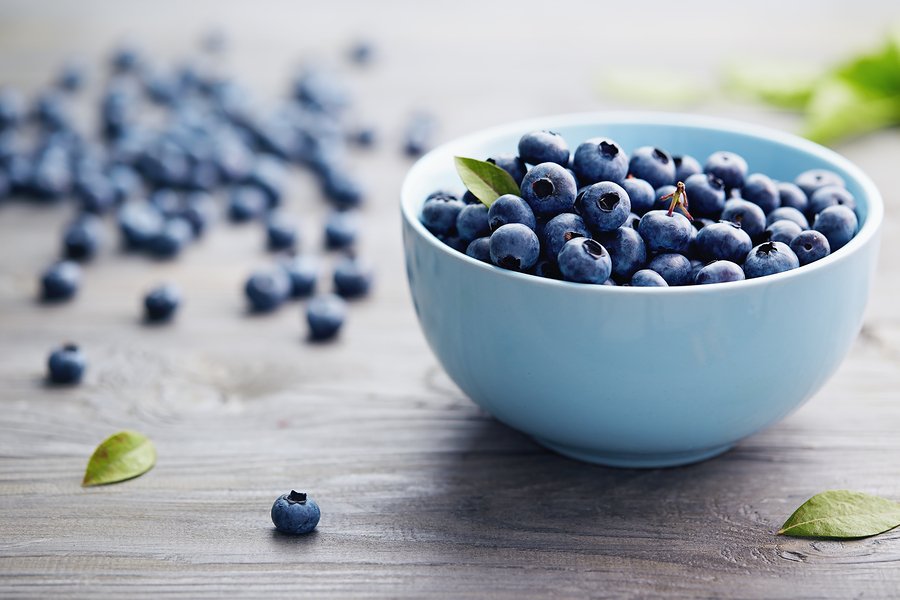 Blueberries are enjoyed all around the world for their sweet taste and nutritional benefits. But they actually have many potential health benefits such as reducing the risk for heart complications, improving cognitive function, and helping control blood sugar while being generally safe at food doses. Read below to learn more about these fruits and how they may improve your health.

Blueberries contain compounds that are beneficial to human health, which include phenolic acids and various types of flavonoids [3, 1, 4].

Anthocyanins are a type of flavonoids with potential antioxidant, anticancer, and anti-obesity properties [8].

However, anthocyanins are very unstable under normal physical conditions and, as a result, are not easily absorbed by the body. Only a small percentage (0.5%-1%) of anthocyanins from food reach the bloodstream [9, 10].

Most health benefits of blueberries are caused by anthocyanins directly in the gut or by traveling to the liver, where they are broken down into metabolites (methylated, sulfated, or glucuronidated conjugates) or just reach the bloodstream unchanged [8].

Other phytochemicals contained in blueberries include flavopiridol, ellagic acid, anethole, and resveratrol. These chemicals have been shown to have cancer-preventive effects [13, 14].

Blueberries are also a good source of vitamin C. 100 g of blueberries contain 10 mg of vitamin C which is about 1/3 of the daily recommended intake [15].

Anthocyanins have multiple beneficial and protective effects on the body, especially for the prevention of oxidation or damage to biological structures like fats, proteins, and nucleic acids [16].

Anthocyanins produce a wide range of colors in plant tissues. They neutralize the potentially harmful effects of free radicals in the body [17].

Anthocyanins can be directly incorporated into lining cells, protecting them from oxidative damage [18, 19].

Similarly, blueberry juice (500 mL/day) reduced the impairment in short-term memory and selective and divided attention caused by general anesthesia in a clinical trial on 26 people [25].

A berry beverage with blueberries, blackcurrant, elderberries, lingonberries, strawberries, and tomatoes had similar effects on working memory in a clinical trial on 40 healthy elderly people [27].

All in all, limited evidence suggests that blueberries may improve some cognitive areas in both healthy people and those with cognitive impairment. Further research should establish how to use them therapeutically.

In a clinical trial on 32 healthy people, consuming blueberries during an exercise period increased the levels of “good” cholesterol (HDL) [38].

Blueberry polyphenols have antioxidant properties, which may protect against heart disease [39].

In a clinical trial on 48 people with metabolic syndrome, dietary blueberries reduced the levels of oxidized LDL and an oxidative stress marker (MDA). This suggests blueberries may help prevent clogged arteries [41].

In a clinical trial on 16 young cigarette smokers, blueberry consumption helped counteract the increased blood pressure caused by smoking. In another trial on 24 people, blueberry intake improved blood vessel function in both smokers and non-smokers but had no effect on blood pressure [45, 46].

Again, limited evidence suggests that blueberries may help prevent heart disease by lowering blood cholesterol and improving blood vessel function. You may discuss with your doctor if including them in your diet may help. However, remember that you should never take blueberries in place of what your doctor recommends or prescribes.

Consumption of blueberries may lower the risk of developing type 2 diabetes [49].

In a small trial on 17 healthy people, blueberry consumption had no effect on glucose metabolism but did increase the levels of a protein that controls insulin secretion by the pancreas (pancreatic polypeptide) [51].

In another trial on 30 diabetic children, a supplement with blueberries and sea buckthorn improved their antioxidant status and reduced a marker of poor blood sugar control (glycated hemoglobin) [55].

Anthocyanins stimulate the secretion of GLP-1 in the gut upon food ingestion, which then acts on the pancreas to secrete insulin [57].

In cell-based studies, blueberry extracts showed both insulin-like properties and protection from glucose toxicity. These extracts also enhance the growth and regeneration of beta cells in the pancreas, which is responsible for the secretion of insulin [58].

To sum up, limited evidence suggests that blueberries may improve blood sugar control and protect from oxidative damage that may lead to health complications. You may use them for this purpose if your doctor determines that they may help as a complementary strategy. Never take blueberries as a replacement for the antidiabetic medication prescribed by your doctor.

In another trial on over 200 young people with arthritis of unknown cause (juvenile idiopathic arthritis), drinking 50 mL blueberry juice per day enhanced the therapeutic effects of the immunosuppressant etanercept [60].

Although the results are promising, 2 clinical trials cannot be considered sufficient evidence to claim for certain that blueberries improve arthritis. Further clinical research is needed to confirm these preliminary findings.

In 2 small trials on 21 young adults and 50 children (aged 7-10), a flavonoid-rich blueberry drink increased their propensity to experience positive emotions and interact with others in a positive way [6].

In another trial on 41 pregnant women, a supplement with blueberry juice and the amino acids tryptophan and tyrosine reduced vulnerability to sadness during the peak of the postpartum blues (3-5 days after giving birth) [61].

In a clinical trial on 20 type 2 diabetic women aged 55+ years, blueberry extract and C-xyloside application to the skin for 12 weeks resulted in significant improvement in skin firmness, wrinkles, and hydration [62].

In another trial on 62 women aged 45-73, an oral supplement with blueberries, pycnogenol, vitamins, and minerals improved skin elasticity and roughness after a 12-week treatment [63].

The natural aging process forms skin wrinkles due to an excessive amount of reactive oxygen species [64, 65].

These reactive oxygen species produce an accumulation of advanced glycation end products that slow down the growth of skin cells while increasing cell death [66, 67, 64].

No clinical evidence supports the use of blueberries for any of the conditions listed in this section. Below is a summary of the existing animal and cell-based research, which should guide further investigational efforts. However, the studies should not be interpreted as supportive of any health benefit.

The following essential nutrients present in blueberries are important for maintaining bone health [72, 2, 73]:

Blueberries (resveratrol) can activate the Sirt1 gene (anti-aging in cells), preventing bone loss due to aging [75].

Fruits such as blueberries with a high fiber content increase satiety and decrease fat storage [78].

Also, blueberries are rich in anthocyanins, which have beneficial effects on obesity and related metabolic complications [79].

Blueberry husks supplemented with probiotics (B. infantis, L. gasseri, and L. plantarum) had anti-inflammatory effects in the gut of rats with colitis better than either the husks or the probiotics alone [84, 85].

The husks suppressed inflammatory responses by decreasing inflammatory cytokines and macrophage activity and alleviated symptoms such as bleeding and pain, while the probiotics. Their polyphenols also have antimicrobial effects on harmful bacteria (Enterobacteriaceae) linked to inflammatory bowel disease [84, 85].

Supplementation with probiotics suppresses the growth of harmful bacteria and restores the healthy composition and function of the gut [86].

The buildup of heavy metals such as arsenic, cadmium, lead, and mercury in the body is toxic because they produce oxidative stress and affect essential functions [87].

Studies in test tubes found that blueberry anthocyanins can chelate aluminum, iron, copper, and other metals [20, 88, 89].

Mice fed with blueberry extracts exhibited less buildup of cadmium in the liver, resulting in a reduced toxicity [90].

Blueberries contain polyphenols and resveratrol, which can help increase longevity and decrease the adverse effects associated with aging, as seen in studies in worms [91].

Blueberries are also rich in proanthocyanidins (polyphenols), which have heart-protective effects and extend lifespan [92, 93, 94].

The polyphenols from blueberries reduce oxidative stress caused by reactive oxygen species and prolong the aging process of cells [91, 95].

Blueberries have been shown to activate genes involved in anti-aging and decreasing brain function decline [96]:

However, a study in healthy male mice found that blueberries extracts did not significantly increase lifespan [98].

Below, we will discuss some preliminary research on the potential anticancer effects of blueberries. It’s still in the animal and cell stage and further clinical studies have yet to determine if this fruit is useful in cancer therapies.

Do not under any circumstances attempt to replace conventional cancer therapies with blueberries or any other foods or supplements. If you want to use them as a supportive measure, talk to your doctor to avoid any unexpected interactions.

Blueberries may help prevent cancer due to effects like anti-inflammation, antioxidation, inhibition of cancer growth, and increased cell death (apoptosis) in cancer cells [99].

Gallic acid from blueberries stopped the spread of cancer cells from the main tumor to other parts of the body by stopping transmission and inducing cell death in mice [100].

Blueberries slowed colorectal tumor progression in male but not in female rats [102].

Side Effects and Contraindications

While blueberries are generally safe when consumed at normal food doses, their overconsumption may:

Additionally, blueberries have some constituents with the potential to cause adverse effects. These include:

Anthocyanins from blueberries can alter the expression of many genes involved in fat breakdown [114].

Other genes that may be affected by blueberry consumption include: