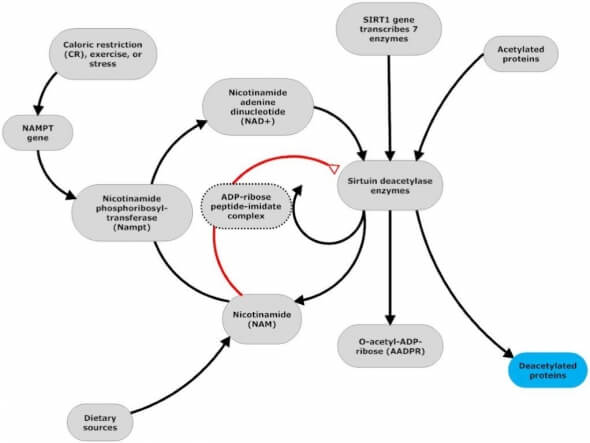 Nicotinamide Riboside is a precursor to nicotinamide adenine dinucleotide, a compound with many purported benefits. Since it activates sirtuins, people claim it has anti-aging properties. Others use it to support a healthy circadian rhythm. Scientists have explored its effects on generating energy in mitochondrial-dense tissues like muscle, brain, and liver. Read more below to get a clear picture of its effects.

What is Nicotinamide Riboside?

Nicotinamide Riboside (NR) is a nucleoside made out of niacinamide and ribose. It is a form of Vitamin B3, which is also called niacin or nicotinic acid [1].

Nicotinamide Riboside supplements have not been approved by the FDA for medical use. Supplements generally lack solid clinical research. Regulations set manufacturing standards for them but don’t guarantee that they’re safe or effective. Speak with your doctor before supplementing.

Nicotinamide riboside is a precursor to nicotinamide adenine dinucleotide (NAD), which means it is needed to make NAD+. Most of NR’s purported health benefits are claimed to be a result of its formation of NAD+, though no clinical research supports such claims [4].

By carrying and letting go of electrons, NAD+ is necessary for energy creation in the mitochondria. (Watch this 2-minute video to learn how this works.) Therefore, NAD+ is important for mitochondrial health.

NR supplementation is hypothesized to increase NAD+, which then activates the following enzymes [5]:

Proponents say that NR supplementation supports tissues that heavily rely on mitochondria for energy, including the nervous system, the liver, the heart, and the muscles. Yet, their theories are purely theoretical and no valid studies support them.

Researchers believe NR might increase NAD+ regardless of NAMPT activity, which may help mitigate the aging effects of poor circadian rhythm entrainment in animals [7].

In one study of 40 obese, sedentary men with high blood fats, nicotinamide riboside did not improve total or LDL cholesterol compared to placebo after 12 weeks [8].

In a small preliminary study of healthy middle-aged and older adults, nicotinamide riboside increased NAD+ levels, which is thought to help lower blood pressure. It also tended to lower blood pressure, but this was uncertain since it isn’t a measure the researchers were primarly interested in [10].

We can’t draw any reliable conclusions about the effects of nicotineamide riboside on blood pressure from this study. Follow-up trials are needed [10].

No clinical evidence supports the use of nicotinamide riboside for any of the conditions listed in this section.

Below is a summary of the existing animal and cell-based research that should guide further investigational efforts. However, the studies listed below should not be interpreted as supportive of any health benefit.

Human data on the effects of NR on muscle function are lacking.

Mitochondrial myopathy is a disease where the mitochondria in muscle cells are damaged. It can cause muscle weakness and other problems [11].

In mice, supplementation of NR (400mg/kg) increased NAD+ levels in muscles, which increased their energy use and metabolism [1].

Scientists are also looking at the effects of NR on stimulated mitochondrial unfolded protein response, which theoretically may protect against mitochondrial disease [12].

The antioxidant potential of NR in humans remains to be investigated.

NR reduced the negative effects of high levels of oxidative stress in mice [13].

Low levels of NAD+ synthesis are hypothesized to cause DNA damage. NR supplementation increases NAD+ levels. Some researchers consider NR may help protect against DNA damage, oxidative damage, and tumor progression, but research is lacking to support this theory [14].

However, the effects of NR on diabetic symptoms in humans are not known.

According to some yet unconfirmed theories, proper NAD metabolism may help protect the brain. Scientists are exploring whether NR protects the nerve cells in the brain by activating the SIRT3 [17] and PGC1a [18] pathways and delaying axonal degeneration [19].

NR improved cognitive function and slowed the progression of Alzheimer’s disease in mice given for 3 months. These findings cannot be extrapolated to humans [20].

One research team studied how the oral administration of NR increases NAD in animals. They suggest its properties may help protect the liver. NR stopped fat accumulation, lowered oxidative stress, prevented inflammation, and improved insulin sensitivity in the liver of mice, but additional animal studies and clinical evidence are lacking [21].

Some scientists are exploring the potential anti-aging effects of NR in cells and animals. However, no clinical data to date suggests that NR has any longevity-promoting effects in humans, despite some widespread marketing claims.

Research teams investigating whether NR increases the amount of NAD in the body. They think this might, theoretically, help reprogram dysfunctional cells and increase longevity in mammals. Still, such theories remain unproven [23].

Some sources cite an animal study that no valid conclusions can be drawn from. In the study, NR induced the mitochondrial unfolded protein response and synthesis of prohibitin proteins. This was said to “rejuvenated stem cells” in aged mice. Their findings have yet to be replicated and confirmed [23].

In clinical trials, no serious adverse effects were reported in patients taking nicotinamide riboside in doses up to 1000 mg twice daily for up to 12 weeks.

In mice, NR supplementation worsens exercise performance. They had a lower physical performance compared to the control group [24].

Is Nicotinamide Riboside Right For You?

Nicotinamide levels may be influenced by genes. SelfDecode can help you determine how your genetic variations might be linked to your nicotinamide levels and general health. We now offer our own testing kit for users in the United States, but accept many other testing kits.

Check out your SNPs:

NAD(+) level decrease in aged mice and humans, which some scientists think is a result of lower NAMPT. Have in mind that these theories have not been verified in humans [21].

How to Use Black Seed Oil + Side Effects, Dosage, Reviews