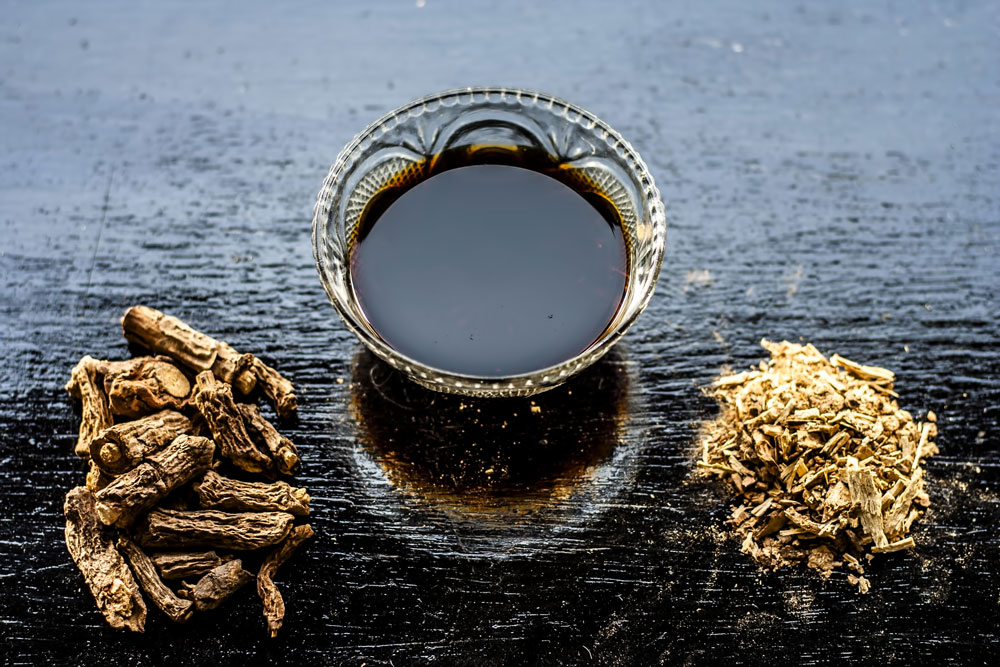 The root of a tropical plant we associate with the 19th-century Western sarsaparilla drink has a long history of use in traditional medicine. The root can also be brewed as a tea or taken as an extract. Find out about the preparations of this herb that were lost in time and how to safely use it.

Plant Definition & Its Many Varieties

Sarsaparilla is the common name of a climbing plant genus called Smilax. Sarsaparillas grow well in warm and tropical regions, especially Mexico, Honduras, Jamaica, and parts of the United States. Some varieties thrive in Southeast Asia and Australia. The main species are [1+]:

The first European explorers introduced the plant to Europe in the 16th century. They considered it a safer alternative to mercury, which was used back then for syphilis.

Note: It’s important not to confuse true sarsaparilla with other plants also called sarsaparilla such as Indian (Hemidesmus indicus) and wild (Aralia nudicaulis) sarsaparilla. Although their roots are also used in traditional medicine, these plants are not even related to sarsaparilla and their compositions are totally different [2, 3].

True sarsaparilla comes in many varieties, most of which grow in North and Central America. All belong to the Smilax genus and shouldn’t be confused with wild sarsaparilla, an entirely different plant.

In the 19th and early 20th century, sarsaparilla was used to “purify blood,” reduce water retention, and promote sweating. Additionally, it was considered a remedy for [4]

Chinaroot – the sarsaparilla most commonly used in China – has been used since the 1960s for some similar indications. It was also thought to clear vaginal and sexually transmitted infections, as well as tuberculosis and scabies. Aside from these, the root was used to improve [1+]:

Sarsaparilla is also considered an aphrodisiac and sexual stimulant in China [14].

In other countries such as Thailand, Korea, and Sri Lanka, chinaroot is used to reduce inflammation, improve blood vessel health, and help with kidney and liver diseases. Its use in folk medicine even spans some serious conditions such as blood poisoning, cancer, and AIDS [1+].

Many of these traditional uses remain, however, scientifically unproven.

Up until the last century, sarsaparilla root was taken as a remedy for swelling, arthritis, and to promote sweating, among its other traditional uses. Yet, no large-scale clinical studies have proved its benefits.

The belowground parts (roots and underground stems) of sarsaparilla are most commonly used. Their main active components are:

The berries contain high amounts of carotenoids, including lycopene and beta-carotene, while the leaves are rich in phenolic antioxidants [21, 22, 23, 24].

Since it’s the main active component, sarsaparilla remedies used in traditional Chinese medicine are standardized to an astilbin content of at least 0.45% [1+].

Sarsaparilla is described as a strong anti-inflammatory in some studies. Scientists think this might explain its traditional use for conditions such as rheumatoid arthritis, psoriasis, and skin allergies, but the evidence is inconclusive.

Its active components block inflammatory proteins (such as NF-kB and PI3K/AKT) and activate the anti-inflammatory AMPK–PPARgamma in cells and animals [25, 26, 27, 28, 29, 30].

Scientists are also investigating whether sarsaparilla reduces the production and development of immune cells (including T cells, neutrophils, Th17, CD4+, CD8+, and macrophages), kills some of them, and prevents them from reaching the epicenters of inflammation [30, 35, 33, 36, 28].

But that’s not all.

Its compounds (especially astilbin) seem to reduce free radicals by blocking the enzymes that promote their buildup and activating detox enzymes that neutralize them (such as SOD, CAT, and glutathione peroxidase) [37+, 38, 39, 40, 41, 42].

Phenolics in sarsaparilla are thought to fight free radicals and reduce inflammation, but more research is needed.

To sum it up, scientists think that sarsaparilla may block some key pathways in the body that raise inflammation and oxidative stress while boosting detoxification. A synergy of these effects may account for its overall wellness benefits in animals.

However, whether sarsaparilla acts by the same mechanisms in humans is unknown. Additional research is needed.

An Indigenous Brew Lost in Time

Sarsaparilla is also the name of a soft drink that became very popular in the US during the 19th century. It is often associated with Wild West saloons in popular culture.

The main ingredients were Honduran or Mexican sarsaparilla root, sassafras root bark, and other herbs such as licorice and anise.

Sarsaparilla was very popular due to the belief that it could improve skin diseases, arthritis, and high blood pressure. However, one of the herbs in this mix turned out to carry serious risks.

Sassafras contains a compound (safrole) that was discovered to cause liver damage and cancer. In the 1960s, the FDA banned sassafras altogether. And at the time, coke drinks became increasingly popular. As a result, sarsaparilla drinks quickly became a thing of the past [43, 44].

The legendary soft drink of Wild West saloons was made from sarsaparilla, sassafras (now banned), and other aromatic herbs like licorice and anise.
Get the Regimen of A Top Biohacker

Most people describe the sugary-sweet taste of sarsaparilla similar to root beer. Several other herbs mixed into the beverage give it a bold, medicinal flavor. Some find it stronger than root beer and slightly less sweet.

Numerous microbreweries in the US make sarsaparilla nowadays, while it’s even more popular in the UK and in parts of Asia and Australia. Ultimately, the taste will depend on the brand, country of origin, and exact ingredients.

Have in mind that some brands add artificial flavors and may not contain sarsaparilla at all.

For example, soft drinks with artificial flavors that mimic the taste of sarsaparilla are popular in countries such as the Philippines, Taiwan, Malaysia, and Australia. They are often sold under the brand name “Sarsi.”

In the UK, sarsaparilla drinks became a legacy of the 19th to 20th-century temperance movement against alcohol consumption.

A different sarsaparilla ritual is practiced in Japan: people drink a tea containing chinaroot and other herbs (Toso-shu) on the morning of January 1st based on the belief that it will prevent diseases in the family [45].

The taste of sarsaparilla tea is described as sweet and similar to cream soda and soft drinks.

Sarsaparilla naturally has a sugary-sweet taste, but “sarsaparilla soft drinks” produced in some parts of the world nowadays contain only artificial flavors.

It’s commonly believed that sarsaparilla and root beer are identical. But there are some important differences between the two. For one, root beer doesn’t contain sarsaparilla root.

Root beer is a carbonated, most often non-alcoholic drink inspired by beverages prepared by North American indigenous people. First marketed in the 19th century, it was originally made with sassafras root bark, licorice root, wintergreen leaves, vanilla bean, ginger root, and other flavors. It was developed as an alternative for those who didn’t like the taste of sarsaparilla.

But unlike most sarsaparilla drinks, root beer could maintain a similar taste even after sassafras was banned. Nowadays, many commercial brands of root beer contain artificial sassafras flavoring or safrole-free sassafras extract for a more “authentic” taste.

Sarsaparilla was never an ingredient in root beer. Both the sarsaparilla drink and root beer originally contained aromatic herbs and the now-banned sassafras, but root beer managed to retain a similar taste.

Sarsaparilla is normally taken by mouth. The most common supplement forms are:

Creams containing sarsaparilla are also available for skin conditions such as psoriasis, acne, and allergies.

Due to the lack of clinical trials using sarsaparilla alone and the fact that it’s not approved by the FDA for any conditions, supplement manufacturers and users have established unofficial dosing guidelines based on trial and error.

Typical doses are 0.3-2 g/day of powdered root and half a teaspoon of tincture 2x/day. For commercial supplements and creams, it’s important to discuss their use with a doctor, read the instructions carefully, and start with a low dose to test for side effects.

How to Make Sarsaparilla Tea

A homemade tea claimed to improve cough and fever can be brewed from the powdered or chopped root.

You can purchase sarsaparilla root powder or ready-to-use tea bags. Alternatively, you can buy dried roots and finely chop them yourself.

To prepare the tea:

Certain people used sarsaparilla supplements for psoriasis, infections, obesity, and high blood pressure. Most were satisfied with the results.

Others, however, used sarsaparilla for muscle building, erectile dysfunction, and hot flashes – all of which are unproven. Expectedly, a few reported that it didn’t work.

A lot of users took in sarsaparilla supplements for Lyme disease and reported satisfactory results. Although the effects of sarsaparilla on this condition haven’t been studied, symptoms similar to Lyme disease – an overactivation of the immune system, inflammation, and pain – have traditionally been improved with sarsaparilla.

Side effects were very rare. Only one person reported feeling jittery after taking the supplement and another one developed an allergic reaction.

The drink was normally appreciated for its moderately sweet taste with hints of licorice, vanilla, wintergreen, and caramel. Depending on the brand, some users complained about unbalanced flavors, excessive carbonation, and high price.

Sarsaparilla is a tropical plant used in traditional medicine – especially in North America and Southeast Asia. Its root was also the main ingredient of a 19th-century drink similar to root beer that is no longer so popular but can still be found in some countries.

Sarsaparilla supplements are available as pills, tinctures, powdered roots, and creams. You can make a tasty tea from the chopped or powdered roots.