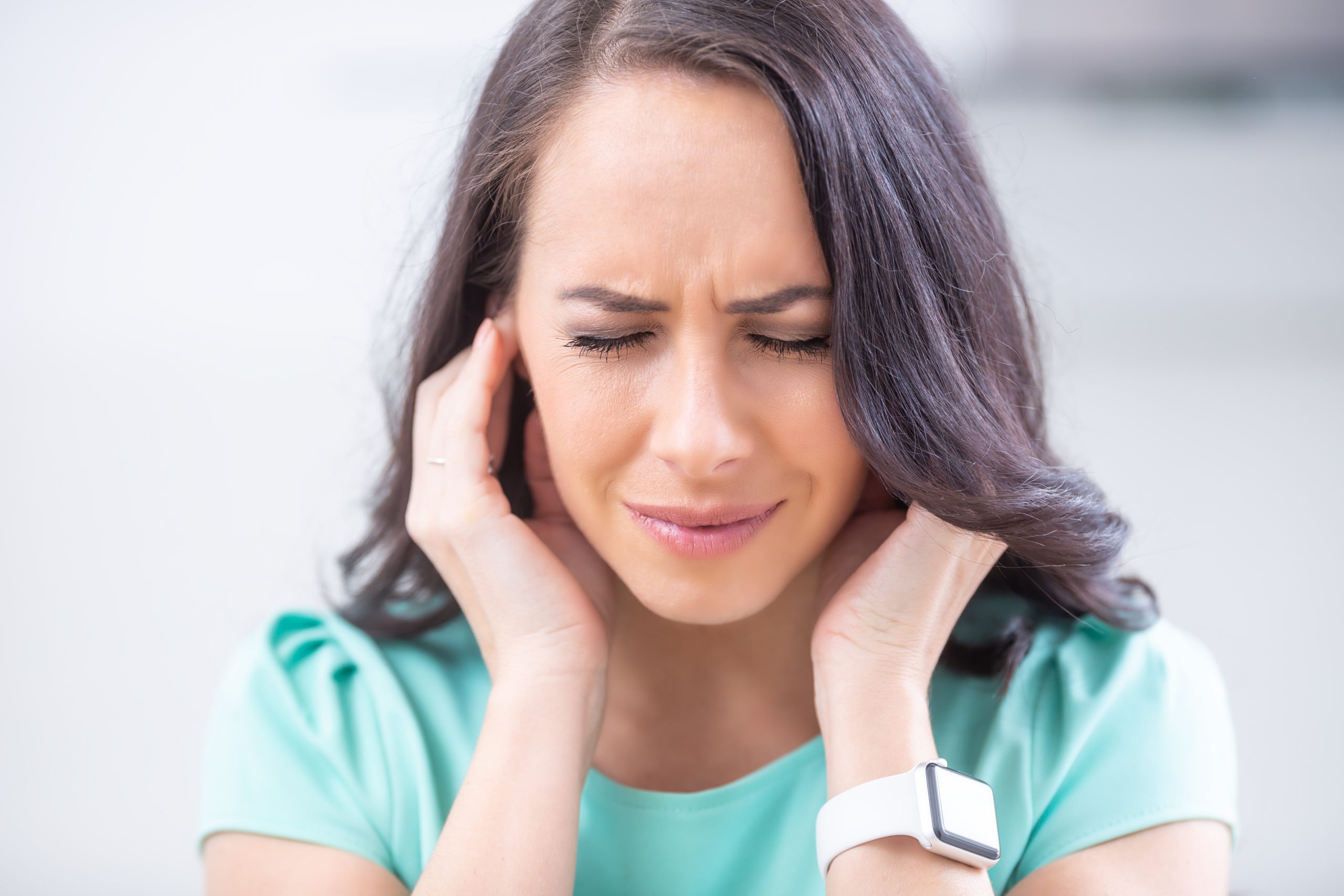 In the following sections, we’ll outline complementary approaches that may help your tinnitus. If you have tinnitus, the below strategies are not meant to replace your standard medical treatment. Make sure to consult with your doctor before making any significant changes to your day-to-day routine.

Loud noise is a major cause of tinnitus because it damages the hair cells of the inner ear (acoustic trauma). People with occupational exposure to noise — such as factory and construction workers, musicians, and soldiers — are at a particularly high risk of tinnitus. Listening to music at very high volume is a common risk factor in young people [1, 2, 3, 4].

Reducing your exposure to occupational noise (by wearing protective equipment) and extremely loud music (by wearing ear plugs and turning down the volume) can help prevent tinnitus.

Chronic tinnitus can have very negative psychological effects. It has been associated with anxiety, depression, worse overall wellbeing, and reduced cognitive functioning (especially in attention) [5].

Cognitive-behavioral therapy has been shown to effectively improve mood and quality of life in people with tinnitus, although evidence of its sustained benefits at 6-12 months of follow-up is lacking. Self-help, and internet-delivered interventions seem to be as effective as face-to-face therapy [6, 7, 8, 9].

Its combination with mindfulness meditation further helped reduce negative emotions in a few clinical trials. In some of them, the participants even reported reduced tinnitus severity and loudness [10, 11, 12, 13, 14, 15].

Transcranial magnetic stimulation (TMS) is a non-invasive procedure that uses magnetic fields to stimulate brain cells. A meta-analysis found that TMS can improve the symptoms and quality of life in people with chronic tinnitus, as well as preventing its return over time. This procedure is relatively safe and well-tolerated according to another meta-analysis [16, 17].

Transcranial direct current stimulation (tDCS) is another procedure that delivers weak electric current to the scalp. Two meta-analyses came to opposite conclusions regarding its effectiveness for tinnitus loudness. However, the second one did find this technique effective to reduce distress in people with chronic tinnitus [18, 19].

Transcutaneous Electrical Nerve Stimulation (TENS) is a non-invasive method of stimulating nerves by applying electricity to the surface of the skin.

Several studies have successfully used TENS on areas close to the ear to improve tinnitus severity. This method was most effective in people with low-frequency tinnitus and mild hearing loss in one of the studies [20, 21, 22, 23, 24, 25].

Despite the way it is often depicted in the popular media, hypnosis is actually a real phenomenon that some mental health professionals use to address certain problems. It’s defined as a state of focused attention and reduced awareness of the environment that enhances the ability to respond to suggestions [31].

A few clinical trials show that different modalities of hypnosis may reduce tinnitus severity and distress [32, 33, 34, 35, 36].

A meta-analysis suggested that acupuncture may offer some subjective benefits to the treatment of tinnitus, but there was high heterogeneity in the studies included: Chinese studies reported positive results more frequently and used more appropriate acupuncture points and sessions, but were often poorly designed and had higher risk of bias than studies in English [37].

Myth: there’s nothing you can do with tinnitus, you just have to live with the ringing in your ears.

The truth is, you can make changes that will help you decrease or diminish your tinnitus, and the answer lies within your DNA.

Our Tinnitus DNA Wellness Report analyzes over 420,000 genetic variants to help you understand the effects of your genes on tinnitus. Get personalized health recommendations and find out which strategies can help you live a quieter and less stressful life.

Severe tinnitus is often associated with emotional stress symptoms, which in turn worsens quality of life in people living with this condition. Some studies even suggest that stress can be a causative factor for tinnitus [38].

In a study, people suffering from tinnitus had higher blood levels of the stress hormones 5-hydroxyindoleacetic acid and norepinephrine [39].

We recommend addressing sources of stress in your life, either by taking up a stress-busting hobby (such as yoga or meditation) or seeking professional help.

Although a cause-and-effect relationship hasn’t been clearly established, a meta-analysis of 20 observational studies found an association between smoking and tinnitus [40].

A large-scale study associated regular (at least once per month during a year) marijuana use with an increased incidence of tinnitus. However, there was no correlation between marijuana use and tinnitus severity. Moreover, the authors speculated that psychosocial factors (e.g., using marijuana to self-medicate for tinnitus) could, in part, explain this association [41].

In 3 small clinical trials, yoga reduced subjective symptoms of tinnitus and improved distress. However, it was less effective than cognitive-behavioral therapy [42, 43, 44].

Two studies found that tinnitus was more common among people with low blood vitamin B12 levels [45, 46].

Conversely, a high dietary intake of this vitamin reduced the odds of developing tinnitus in another study [47].

Reduced intake of proteins has been associated with tinnitus. Conversely, people who ate more proteins and fish had a reduced incidence of this condition in 2 studies [49, 47, 50].

High dietary intake of fats was associated with increased odds of tinnitus in a study. Similarly, people with tinnitus and high blood fat levels showed reduced tinnitus severity after following a low-cholesterol diet for 24 months [51, 52].

In elderly patients with tinnitus, melatonin levels are very low. This may indicate that melatonin is connected with normal ear activity [53].

In line with this, melatonin helped reduce tinnitus severity and improved quality of life and sleep quality in several clinical trials. Moreover, this hormone was more effective than the antidepressant sertraline and a mixture of antioxidants [54, 55, 56, 57, 58, 59, 60, 61].

Melatonin seems to help by reducing both oxidative damage to hair cells of the inner ear and the excessive neurotransmission of glutamate [62].

Intravenous vinpocetine (Cavinton) reduced tinnitus severity in 4 clinical trials. Unfortunately we cannot critically analyze most of the studies because only one of them has been translated into English [65, 66, 67, 68].

In a preliminary clinical trial on people with tinnitus and vitamin B12 deficiency, intramuscular injection of this vitamin during 6 weeks reduced tinnitus severity. However, oral supplementation was ineffective in another trial [70, 46].

The results of the studies testing Ginkgo biloba extract for tinnitus are mixed. While 4 studies found it improved this condition (one found it comparable to the drug pentoxifylline), 4 found it ineffective [71, 72, 73, 74, 75, 76, 77, 78].

Nevertheless, two meta-analyses concluded that Ginkgo biloba is probably of little help in the treatment of tinnitus [79, 80].

Tinnitus and hearing loss have been associated with lower levels of zinc in the blood. However, the most recent study found no relationship when zinc status was adjusted for age, sex, and hearing loss [81, 82, 83, 84].

In a small clinical trial, zinc supplementation reduced the severity of tinnitus in 82% of patients. Zinc was also effective in another trial on people with tinnitus and noise-induced hearing loss. However, most trials found zinc supplementation ineffective. Indeed, a meta-analysis couldn’t find sufficient evidence to claim that zinc improves tinnitus symptoms [81, 85, 86, 87, 88, 89, 81, 90].

Myth: there’s nothing you can do with tinnitus, you just have to live with the ringing in your ears.

The truth is, you can make changes that will help you decrease or diminish your tinnitus, and the answer lies within your DNA.

Our Tinnitus DNA Wellness Report analyzes over 420,000 genetic variants to help you understand the effects of your genes on tinnitus. Get personalized health recommendations and find out which strategies can help you live a quieter and less stressful life.