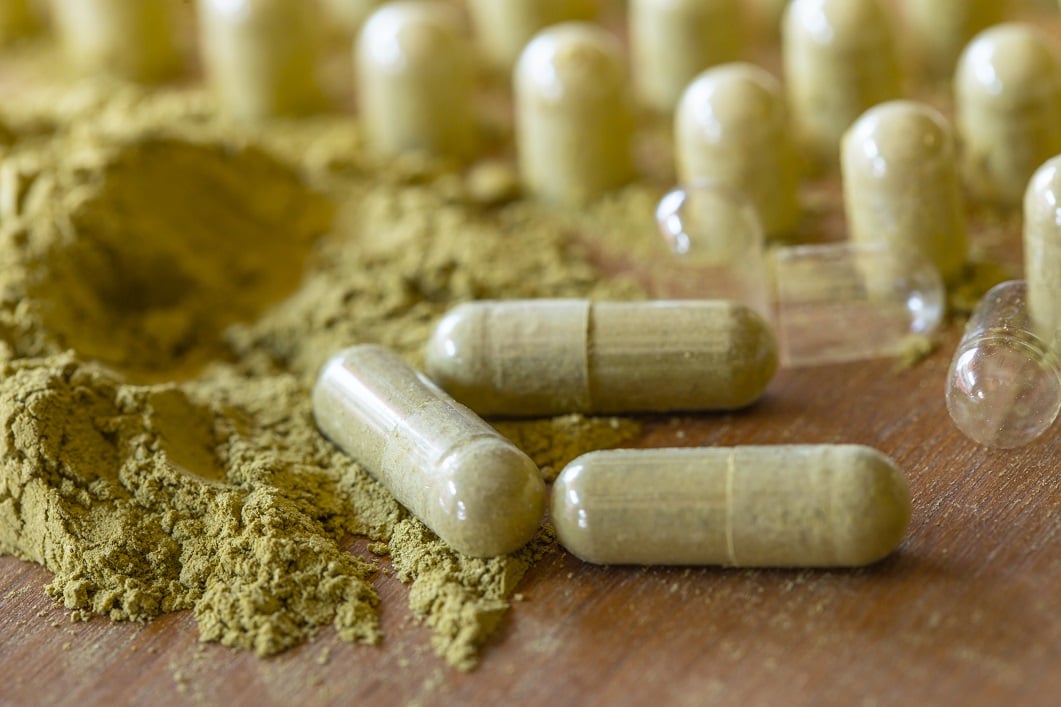 Andrographis paniculata is an Ayurvedic plant known as the “king of bitters.” People traditionally use it to fight infections and the common cold. But did you know that scientists are researching whether it can enhance cognitive abilities and skin collagen formation? Learn about the science behind this herb.

Andrographis Paniculata, known as the “King of Bitters,” is traditionally used in Ayurveda and Chinese Medicine.

Andrographis supplements have not been approved by the FDA for medical use. Supplements generally lack solid clinical research. Regulations set manufacturing standards for them but don’t guarantee that they’re safe or effective. Speak with your doctor before supplementing.

Andrographolide (a diterpenoid) is the most bioactive and most extensively studied compound [3, 4].

The leaves are traditionally used more than the rest of the plant and contain anywhere from 0.5% and 6% Andrographolide content [5, 2].

Both the herb as a whole and its specific extracts have been partially researched [2].

According to the research, some symptoms may improve within 2, but it usually takes 4-5 days before most symptoms resolve [7].

A couple of studies suggest the Kan Jang herbal combination improves cold symptoms in children better than echinacea. According to other studies, the same product might help prevent colds in adults [9].

Kan Jang was safe and improved symptoms in children with the common cold. It performed better than Echinacea: the group receiving Kan Jang had less congestion and nasal secretion [13].

Scientists are investigating the effects of andrographolide specifically as a preventative against cigarette smoke-induced lung injury in cells [14].

Andrographis (6 grams daily) may be comparable to acetaminophen (Tylenol) for reducing fever and sore throat associated with pharyngotonsillitis after 3 and 7 days of supplementation [15].

Some side effects were noticed in ~20% of the group, although minimal [10].

In one study, 1,200 mg of Andrographis for 4 days reduced measured symptoms of pharyngotonsillitis by the 2nd day [10].

In the same study, the group taking the 1,800 mg dose had relatively higher mucosal healing rate over the 1,200mg and placebo groups [18].

However, andrographis did not affect remission rates, when compared to placebo [18].

Scientists are also exploring the effects of andrographis on colitis in mice. It is also being researched for enhancing small intestinal digestion and absorption of carbohydrates by activating intestinal disaccharidases (maltase, sucrase, lactase), but human data to back up these potential effects are lacking [17, 19].

The following purported benefits are only supported by limited, low-quality clinical studies. More research is needed to rate andrographis for all the below-listed uses.

Remember to speak with a doctor before taking andrographis supplements. Andrographis should never be used as a replacement for approved medical therapies.

There is insufficient evidence to support the use of andrographis for arthritis.

Despite the lack of evidence, andrographis is viewed as a “natural complement” against rheumatoid arthritis in traditional medicine [20].

In one study, andrographis is associated with a reduction of rheumatoid factors IgA and C4 but the clinical significance of its effects remained unclear [20].

However, other studies show that andrographis does not appear to reduce pain significantly. It only slightly reduced the number and intensity of swollen joints in patients with rheumatoid arthritis in one study [20].

Scientists are investigating the effects of Andrographis as an add-on to an anti-arthritic drug (etoricoxib) in rats. Human data on this interaction is lacking [21].

More evidence is needed to support the use of andrographis for high triglycerides.

Yet, andrographis is traditionally used in patients with moderately high levels of blood triglycerides (hypertriglyceridemia) [22].

A lower dose of andrographis, standardized to contain andrographolide 72 mg did not affect lipid levels [22].

No clinical evidence supports the use of andrographis for any of the conditions listed in this section.

Below is a summary of the existing animal, and cell-based research that should guide further investigational efforts. However, the studies listed below should not be interpreted as supportive of any health benefit.

Scientists are investigating the effects of andrographis on the following microbes in dishes:

The effects of andrographis on these microbes in humans are unknown. Remember that cell culture work often doesn’t translate to living beings.

Mice given a Salmonella vaccine in conjunction with Andrographis had an enhanced Salmonella-specific antibody response [33].

Folk healers have used andrographis in people with Weil’s disease (a relative of Leprosy). They say the results were comparable with antibiotic treatment (Nitrofurantoin), but proper human trials are lacking to support their claims [26].

The effects of andrographis on cognition in humans are unknown.
In mice, andrographis has shown to lower chronic brain inflammation [34].

Mice with induced acute inflammation had higher survival rates taking Andrographis, but human and other animal studies are lacking [34].

The effects of andrographis on glucose, insulin, and liver health in humans are unknown.

In diabetic rats, andrographolide improved hyperglycemia and insulin deficiency and reduced liver damage from some chemicals and drugs (carbon tetrachloride and acetaminophen) [35, 37, 38].

Other researchers aim to determine the effects of a water extract of Andrographis on liver antioxidant defense systems (SOD, Catalase, glutathione) and lactate dehydrogenase [26, 6].

Andrographis has not been shown to prevent or treat cancer.

Some scientists investigated its effects in cells. However, many substances have anti-cancer effects in cells, including downright toxic chemicals like bleach. This doesn’t mean that they have any medical value. On the contrary, most substances (natural or synthetic) that are researched in cancer cells fail to pass further animal studies or clinical trials due to a lack of safety or efficacy.

With this in mind, research is exploring whether andrographis affects the following pathways and cancer cells:

The effects of andrographis on cancer in humans are completely unknown.

In one low-quality study conducted in Thailand in 1995, Andrographis (1,000 mg twice daily for 5 days) following kidney stone treatment helped reduce the presence of pus, blood, and protein in the urine. However, these findings were never replicated and should be interpreted with serious caution [51].

According to a non-peer-reviewed article from a doctor in Saudi Arabia, ten cases of viper bites were reportedly improved in 3 – 5 days by a compound formula that had Andrographis as the chief constituent. However, no solid data backs up his claims [26].

The standard dose of Andrographis basic root extract ranges widely from 20 – 6,000 mg, although the 2,000 – 6,000 range is typical for fighting the common cold.

Andrographis seems to be largely bound to plasma proteins (55%), which means that only a limited amount is likely to enter the cells [52].

Andrographis is relatively well tolerated, with typically few side effects. A few studies have noted up to 20% of people taking andrographis reported side effects, which were mostly minimal [53, 12, 10].

However, one study involving HIV patients reported dose-related toxicity such as headaches, fatigue, rash, nausea, diarrhea, pruritus, and allergic reactions (dosing 5-10 mg/kg). The trial was interrupted mid-way due to adverse events including an anaphylactic reaction in one patient [54].

Andrographis blocked platelet aggregation in cells and animals. Although the effects of andrographis on platelets in humans are not known, theoretically, this herb may increase the risk of bleeding in patients with bleeding disorders. Caution is advised.

Andrographis may be an immunostimulant. Therefore, theoretically, it may worsen autoimmune diseases by stimulating immune activity. Caution is advised in patients with autoimmune diseases such as multiple sclerosis, systemic lupus erythematosus (SLE), psoriasis, rheumatoid arthritis (RA), or others.

Feeding sun-dried Andrographis powder to female mice at a dose of 2 g/kg/day for 6 weeks, then mating them with untreated males of proven fertility, inhibited pregnancy in 100% of the tested animals [56].

It has also been reported that the administration of Andrographis resulted in abortion in pregnant rabbits. Moreover, the herb is reported to suppress the growth of the human placental chorionic cells (in vitro) [57, 58].

The effects of andrographis on fertility and reproduction in humans are not known. Theoretically, this herb may increase the risk of infertility in women trying to conceive. Caution is advised.

Due to the lack of safety data and concerning animal studies, pregnant and breastfeeding women should strictly avoid andrographis.

Andrographis has shown to reduce Male fertility in Winstar rats [59].

Dry leaf powder of Andrographis dosed at 20 mg/day for 60 days caused sperm production to stop, and generally altered the health of the male reproductive organs [60].

Administration of 50 mg/kg andrographolide to male mice once daily up to 8 weeks had no significant effects on sperm quality. During week four, blood testosterone levels actually increased compared to controls [61].

Rats given up to 1,000 mg/day Andrographis (10.9% Andrographolide), for 60 days prior to mating and 21 days during mating, found total sperm count and sperm motility were unaffected, and fertility was comparable to the untreated control group [63].

Due to the conflicting data and lack of human safety research, men trying to conceive should avoid andrographis.