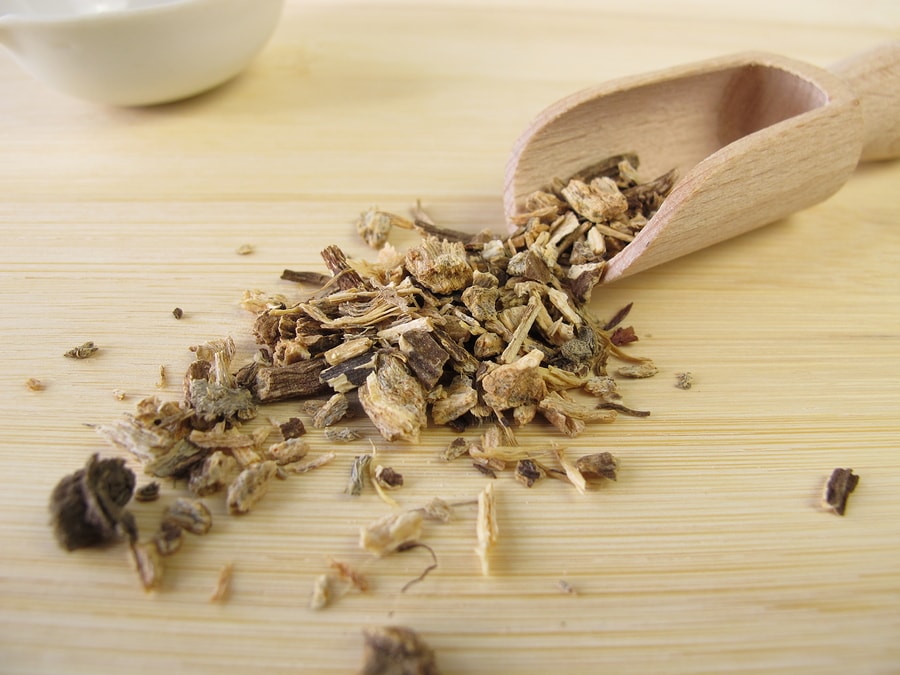 Echinacea is a widely used herbal supplement that is taken to boost the immune system. IT is one of the more promising traditional remedies for the common cold, and it has other potential applications in skin health and anxiety. Read on to learn about all the ways echinacea might improve your health.

Echinacea is a group of plant species. There are 9 species belonging to the echinacea subfamily. Extracts from these species have largely been used in traditional medicine to treat blood poisoning, bacterial infections, and the common cold [1].

Although they belong to the same subfamily, each species of echinacea has a particular set of molecules with biological activity. Different growing conditions, time of harvest, drying, and storage conditions also change the quantity of the active compounds in each plant [2, 3].

Some of the active compounds in echinacea include:

Echinacea has various effects on the immune system. The mechanism of action in humans is not completely understood.

In mice injected with echinacea for 3 weeks, the antioxidant activity (SOD) of blood was increased [7].

Antigen-presenting cells are white blood cells that contribute to the immune system by recognizing foreign molecules. Dendritic cells are one such type of cell, and they require activation to function. After they are activated, they can produce pro and anti-inflammatory molecules called cytokines.

Macrophages are a type of white blood cell. They “eat” (phagocytose) foreign substances and dead cells in our blood. When activated in response to inflammatory signals or bacteria, they release inflammatory molecules called cytokines [10].

Two types of active components of echinacea, alkamides and polysaccharides, may have specific effects on macrophages.

Echinacea has antiviral activity against viruses that have membranes. These include:

In dog cells infected with the influenza viruses, echinacea treatment prevented the virus from entering the cell by blocking viral receptors (hemagglutinin and neuraminidase) [21, 22].

Alkamides from echinacea extracts inhibit the enzymes cyclooxygenases 1 and 2 [9, 23].

Echinacea is considered very safe, but supplements have not been approved by the FDA for medical use and generally lack solid clinical research. Regulations set manufacturing standards for them but don’t guarantee that they’re safe or effective. Speak with your doctor before supplementing.

Echinacea is perhaps best-known as a traditional remedy for the common cold.

In a study of 282 patients, echinacea taken at the first symptom of a cold reduced the severity of the symptoms [27].

Different clinical trials on the use of echinacea indicate that echinacea may either help or have no effect on the treatment of colds [28, 29, 30].

A meta-analysis found that echinacea extracts prevented colds and shortened their duration by an average of 1.4 days [29].

When studying the effects of rhinovirus colds in humans, which is the most common virus responsible for colds, echinacea helped prevent the symptoms of the common cold [28].

A different meta-analysis found some extracts have no clinically relevant effect in the prevention of colds [30].

The positive effects of echinacea extracts on cold symptoms likely derive from its anti-inflammatory activity on the airway [31].

The following purported benefits are only supported by limited, low-quality clinical studies. There is insufficient evidence to support the use of echinacea for any of the below-listed uses. Remember to speak with a doctor before taking echinacea supplements, and never use them in place of something your doctor recommends or prescribes.

In a study of 6 adults treated for 3 days, echinacea extract reduced inflammation and increased the production of molecules (IFN-alpha) that fight infection [32].

Echinacea inhibited inflammatory molecules (IL- 6, IL-8) after viral infection in lung cells. In a model of the human airway, treatment with echinacea reduced mucus in the lungs (reduction in mucopolysaccharide and mucin) [34, 35].

In mouse white blood cells, echinacea affected antibody (immunoglobulin) production in contradictory ways. Although some studies indicated that antibodies are increased, others have reported that echinacea has no effect or can even decrease antibodies [36, 37, 7].

In 49 patients, treatment with echinacea for 3 months helped improve the symptoms of atopic dermatitis (redness and swelling) [38].

In cells, echinacea inhibited collagen breakdown by free radicals. It also aided in wound healing (cicatrizing) after topical application in rats. This is attributed to its antioxidant activity and ability to reduce skin irritation (inhibition of hyaluronidase) [39, 40].

Echinacea can aid in the treatment of acne by inhibiting the growth of the bacteria P. acnes and limiting inflammation [41].

This might result from the ability of echinacea to bind to the CB2 cannabinoid receptor [44].

No clinical evidence supports the use of echinacea for any of the conditions listed in this section. Below is a summary of the existing animal and cell-based research, which should guide further investigational efforts. However, the studies listed below should not be interpreted as supportive of any health benefit.

Echinacea extracts had an anti-inflammatory effect in rats after both topical and oral use [2, 45].

Echinacea decreases inflammation through the inhibition of pro-inflammatory molecules and by binding to the cannabinoid receptor (see Mechanism for more details). This does not necessarily help fight infections but can help reduce the symptoms of infection.

These effects might also result from the ability of echinacea to inhibit cyclooxygenase, an enzyme that helps in the formation of inflammatory molecules (prostaglandins, thromboxane, and levuloglandins). Cyclooxygenase is the target of many non-steroidal anti-inflammatory drugs (NSAIDs), such as aspirin and ibuprofen [46].

In multiple cell studies, echinacea had antiviral activity against herpes simplex, rhinoviruses, human, avian, and swine influenza viruses. Echinacea is not effective against viruses once they have entered the cell [21, 35].

In dog kidney cells, echinacea extract also prevented the influenza A virus from binding to cells, preventing the virus from entering [47].

Echinacea extract decreased the severity of influenza infection in mice [18].

Echinacea displayed its effects mainly in viruses with membranes (such as herpes simplex, influenza, and coronaviruses), probably through its ability to interact with membranes and block hemagglutinin and neuraminidase receptors.

This effect might be derived from the ability of echinacea to damage the fungal cell wall [20].

Obesity can increase insulin resistance, resulting in lower amounts of glucose entering the cells and higher glucose levels in the blood. Over time this can lead to type 2 diabetes [50].

Echinacea extracts increased the activity of insulin in mouse fat cells, resulting in increased glucose uptake. This is caused by the activation of PPAR-gamma. Therefore, echinacea might be useful for the treatment of insulin resistance related to obesity or type 2 diabetes [50, 51].

Echinacea extract inhibits the TRPV1 receptor, a receptor that influences our perception of pain and reduces inflammation. It also inhibits cyclooxygenase enzymes, which are the target of many non-steroidal anti-inflammatory drugs (NSAIDs) that relieve pain [52, 9].

Echinacea extract had antidepressant effects in rats and increased the stimulating effects of L-DOPA (an amino acid that is transformed into dopamine) [6].

Echinacea inhibits the growth of cancerous colon and pancreas cells [53, 54].

Echinacea also prevented the death of normal cells that were treated with chemotherapy, resulting in the death of only cancerous cells [55].

However, many substances have anti-cancer effects in cells, including downright toxic chemicals like bleach. This doesn’t mean that they have any medical value. On the contrary, most substances (natural or synthetic) that are researched in cancer cells fail to pass further animal studies or clinical trials due to a lack of safety or efficacy.

Three species of echinacea are generally used for human consumption:

The roots of the 3 species are used, either fresh or dried. Typically, the flowers, leaves, and stems of E. purpurea are used too [2].

Commercially available products can be found in different formulations:

They might include the whole plant, only roots or the flowers, leaves, and stems.

Depending on the extraction conditions and part of the plant used, the active chemicals can vary amongst different echinacea formulations [56].

According to data from clinical trials, side effects from echinacea consumption are rare. The common adverse reactions seen include rash and mild stomach problems such as nausea and stomach aches [2, 30].

Allergic reactions may occur, especially in people allergic to other plants of the same family (such as chamomile) [2].

Due to the effects of echinacea on immune function, people with autoimmune or systemic diseases like tuberculosis, multiple sclerosis, or AIDS should not use echinacea. This also applies to patients taking immunosuppressants [2].

To avoid adverse effects or unexpected interactions, talk to your doctor before using significant quantities of echinacea. If you experience an allergic reaction or serious side effects, seek medical attention immediately.

Despite the multiple biological activities of echinacea, many of the benefits have not yet been proven in humans.

The concentration of biologically active compounds in echinacea varies between species and even between individual plants [2].

Alkamides from echinacea extracts are biologically available, meaning that they enter the bloodstream and can act internally. Other chemical compounds found in echinacea (caffeic acid derivatives, polysaccharides) have not been studied for their biological availability and it is not known if they reach the blood after oral uptake [2].

Echinacea affects the activity of enzymes responsible for breaking down drugs and potentially toxic compounds. These include:

This could induce toxic blood concentrations of certain drugs such as (S)-warfarin and theophylline. It could also increase the availability of drugs that are broken down by the enzyme CYP3A4 such as verapamil, cyclosporine, and tacrolimus [61].