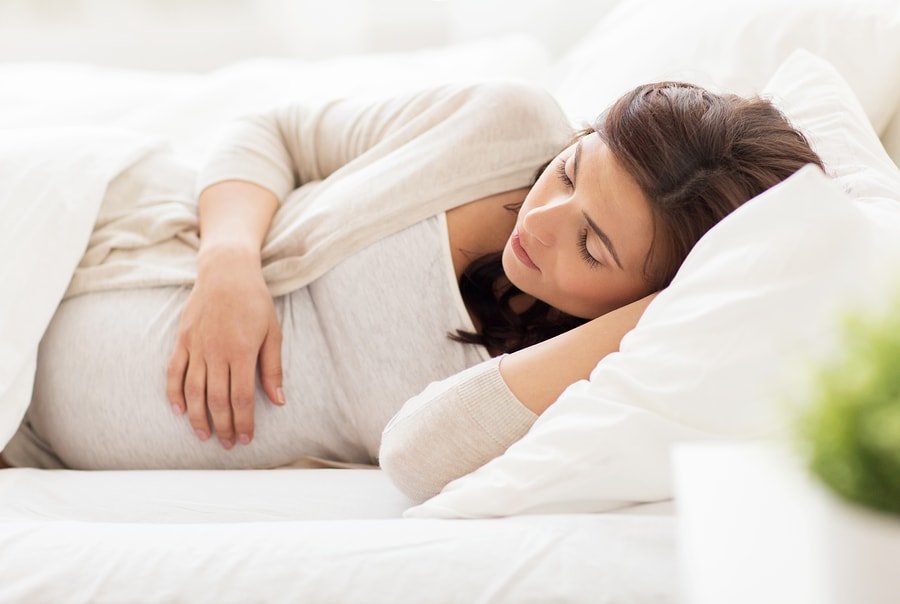 If you and your partner have been experiencing struggles when trying to conceive, or you have PCOS, or just curious about your reproductive health, you might have come across the term Anti-Mullerian Hormone. Keep reading to learn more about this hormone and its health effects.

What Is Anti-Mullerian Hormone?

Anti-Mullerian Hormone (AMH), or Mullerian inhibiting substance, is a protein. The preantral and small antral follicles (maturing eggs and their surrounding cells) produce AMH. The name comes from the discovery of Mullerian ducts, structures that continuously divide and replicate to form the female reproductive system [1].

The primary purpose of AMH in women is to inhibit FSH and follicular growth [2].

Throughout a woman’s life, eggs leave the primordial follicular pool (first stage of a follicle) into a growing pool where they fully mature. The majority of the eggs in the growing pool are eventually lost [3]. 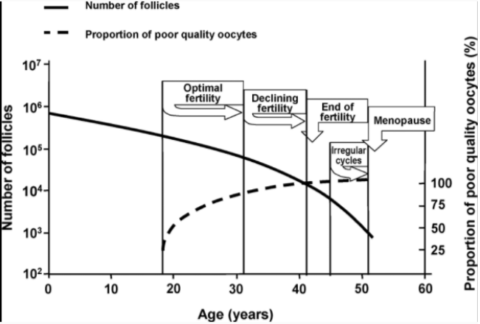 At birth, there are around 1-2 million primordial follicles in the body. At menarche (first menstruation), about 300,000 to 400,000 remain. Afterward, the numbers continue to decline and there are only less than 1000 left by menopause [4].

However, the FSH hormone rescues one of these follicles to become the dominant follicle. This process is continuous throughout life until menopause hits. AMH helps inhibit the recruitment of follicles in the growing pool, consequently preventing their permanent loss [3].

A decreased AMH has shown a faster rate of depletion for primordial follicles. This has been associated with earlier menopause [3].

The follicles also require specific thresholds of FSH to ensure growth to the preovulatory stage. Low AMH increases sensitivity to FSH, which makes the follicles susceptible to continued growth and ovulation [3].

As a woman ages, she releases more and more primordial follicles, accordingly reducing AMH levels. In clinical settings, AMH levels are measured to determine the period of fertility of a woman [2].

In men, AMH is produced by Sertoli cells in the testes. During the fetal stages, AMH inhibits the development of female reproductive organs and is also responsible for testicular development [5].

In the first few days after birth, AMH levels are low but gradually increase after the first week. The rate rapidly increases during the first month reaching an apex at 6 months of age, immediately followed by a slow decrease throughout childhood [5].

You can request that your doctor test your AMH levels. FSH and estradiol are also part of the routine check, but since they fluctuate with every cycle, they are not accurate markers of ovarian reserve [2].

Premature ovarian failure (POF) is the loss of reproductive or hormonal function in the ovaries. Also known as premature menopause, POF is typically caused by chromosomal defects. An individual with POF has very low (possibly undetectable) AMH levels [2].

Endometriosis occurs when the uterine lining grows outside of the uterus. This disorder is often comorbid with premature menopause. Patients with endometriosis exhibit AMH depletion at a rate much faster than healthy women [7].

Cancer patients who have gone through extensive exposure to chemotherapy and radiotherapy are much more prone to losing eggs faster than normal, which is reflected by low AMH levels [2].

AMH testing can be especially useful in this situation if measured before the treatment. It has immense clinical implications because can help assess risk for infertility and predict chemotherapy-related risk in regard to future fertility [2].

This syndrome is a hormonal disorder that is common among women of reproductive age. These women have an above-average concentration of male hormones (androgens) and an increased number of antral follicles [9].

Antral follicle count is one of the diagnostic criteria for PCOS. AMH has a positive association with the number of early antral follicles in both healthy women and women with PCOS. Although the exact cause for high AMH production in PCOS is unknown, androgen production can cause AMH levels to rise [10].

AMH is also correlated with other PCOS symptoms, including oligomenorrhea (infrequent periods), amenorrhea (absence of periods), and insulin resistance. Thus, AMH may also contribute to PCOS [11].

Only the granulosa cells produce AMH and contribute to its function. Because of how location-specific the hormone is, it is a good indicator of potential tumors in these cells. Abnormally high levels of AMH are associated with granulosa cell tumors [3].

AMH levels may also be used in the diagnosis of a potential return of an ovarian granulosa cell tumor [12].

Mutations in the AMH gene can result in irregular AMH production and defects in the AMH receptors. These factors result in people with “male” XY chromosomes developing female reproductive organs. Patients with Persistent Mullerian Duct Syndrome have undetectable levels of AMH [5].

Congenital Hypogonadotropic Hypogonadism is a condition in which the male testes produce little to none sex hormones. It leads to a decreased number of Sertoli cells and consequently low levels of AMH [5].

Measurable levels of AMH in young boys with cryptorchidism indicate undescended testicles, while undetectable levels indicate the presence of ovaries or a sexual ambiguity, a condition in which the infant’s external genitals don’t appear to be strictly male or female [13].

Health conditions associated with cryptorchidism include [14]:

Klinefelter syndrome is a chromosomal ailment that results from 2 or more X chromosomes in a male. In males with this condition, Sertoli cells function steadily decays resulting in undetectable levels of AMH [15].

Monorchidism is a condition in which the affected patient has only one descended testicle. This results in fewer functioning Sertoli cells and lower AMH levels [15].

The reason AMH is popularly used as a testing mechanism for sex function disorders in young males is that it is much more sensitive and location-specific than other hormones [5].

High AMH levels possibly affect Androgen Insensitivity Syndrome (AIS). Males with AIS have androgen (male hormones) deficiency or defects in androgen signaling (transmission), which results in female or ambiguous genitalia. High levels of AMH are considered when a patient is diagnosed with AIS [5].

Varicocele is a disorder in which the veins in the scrotum get bigger and causes blood to drain from the testicles. Prepubertal boys with this syndrome have high AMH levels. This can cause abnormal testes function and infertility [5].

Ovarian reserve involves the quality and quantity of the follicles and eggs that a woman has. Both characteristics are crucial for a woman’s reproductive potential [16].

The specificity and sensitivity of AMH make it a go-to for determining the number of functioning egg cells left in a woman’s ovaries. Women with the following clinical conditions may be at risk for an abnormally reduced supply of eggs [17, 18]:

Ovarian reserve testing allows for tailored fertility treatment plans. Predicting the age of menopause at a young age is also useful to preserve fertility in those who are higher at risk for certain conditions [17].

Traditionally, hormones such as FSH, estradiol, and inhibin B are measured during the early stages of the follicular phase to determine a woman’s egg supply; their concentrations are affected by different phases of the menstrual cycle. AMH is much more constant between puberty and menopause and can be used as an accurate measure at any time of the year [19].

AMH testing in women with cancer can also help determine their ovarian reserve [17].

IVF is an assisted reproductive technology in which the egg and sperm meet outside of the body in a petri dish [20].

In IVF, because the premature follicles secrete AMH, higher levels of AMH are predictive of a higher number of ovarian follicles (egg cells) [21].

In IVF, FSH stimulants are administered to a patient as part of the procedure. These stimulants pose the risk of an excessive response from the patient.

Ovarian hyperstimulation can cause [22]:

A meta-analysis indicated that AMH could be used to predict response to IVF treatment [17].

3) Other Diseases and Conditions

Testing AMH levels can also help determine whether someone has reproductive conditions.

AMH levels can be used to determine and recognize various conditions including [23]:

Relative to other markers used for ovarian reserve testing, AMH has few limitations. However, normal fluctuations, medication and contraceptives, and surgeries can all contribute to differences in AMH levels [8].

There is also no international standardization among different procedures that test for AMH (assays). Different ranges define normal, high, and low AMH concentrations from test to test. In clinical practices, it is imperative to use the same test as the one used in a reference population study to have accurate results [24].

Additionally, once pregnancy begins, AMH is not useful in determining the ability of the embryo to survive successfully [25].

There are also controversies regarding the usefulness of AMH testing and reproduction. In a study of 49 women over the age of 40, AMH levels did not affect potential pregnancy. Both women with normal AMH and extremely low AMH (less than 0.4 ng/ml) were able to become pregnant [26].

In a study of 81 women, overweight women with PCOS had an increase in AMH levels when they were prescribed Orlistat (an anti-obesity weight loss drug) along with diet and physical exercise [27].

Lifestyle choices can affect AMH levels in women. Daily smoking has a negative association with AMH levels in a cross-sectional study of 2,320 women. However, these changes are reversible. Women who quit smoking saw their AMH levels return to normal [31].

Other factors that can decrease AMH levels [32]: