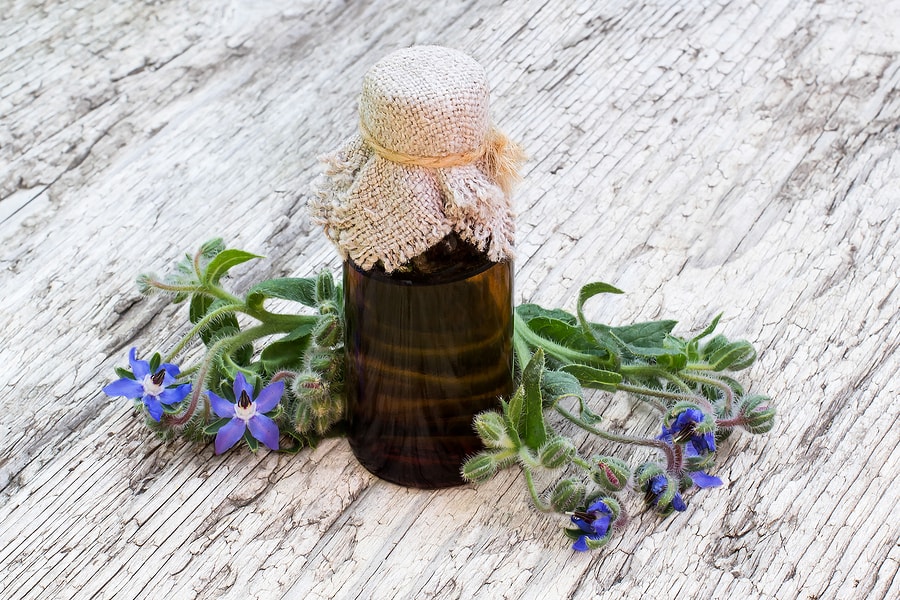 Borage is a flowering herb full of fatty acids and antioxidants. Its oil has shown promise for premature infant growth, heart health, arthritis, and skin health. Read on to learn more.

Borage (Borago officinalis), also known as the Star Flower, is an herb native to parts of Asia, North Africa, and Europe [1].

Borage has been used since ancient times in Iranian traditional medicine as a tranquilizer. In the modern day, its oil is being researched as a potential aid in arthritis and respiratory distress [2].

The herb is an excellent source of Gamma-Linolenic Acid (GLA), the compound responsible for many of the healing powers of borage. GLA helps maintain animal cell membranes’ structure and function. It is the precursor to many vital active compounds and hormones (prostaglandins, thromboxanes, and leukotrienes) [2].

Borage leaves had high antioxidant activity when in hot water. Borage had high levels of tannins, flavonoids, and phenols. These compounds increase antioxidant capacity, which may protect against DNA damage and harmful mutations [7].

In one study of 38 participants, the subjects drank borage twice daily for 2 weeks. The total amount of antioxidants in their blood samples increased. This study attributed the herb’s ability to combat oxidative stress largely in its key antioxidants [17].

Borage oil supplements have not been approved by the FDA for medical use and generally lack solid clinical research. Regulations set manufacturing standards for them but don’t guarantee that they’re safe or effective. Speak with your doctor before supplementing.

In a study of 238 premature infants, the infants were given borage and fish oil supplements for 9 months after birth. They had benefits in overall growth and development. However, there was no significant difference between the 2 groups in regards to brain development [18].

In an 8-week study of 59 subjects, a combination of oils from borage and echium reduced total and LDL (bad) cholesterol. The oil also increased HDL (good) cholesterol levels and lessened the severity of type 2 diabetes in the short term [19].

In a 28-day study of 30 men, the participants had their heart response to stress tested. Those given borage oil supplement experienced lower blood pressure and heart rate and better performance under stress [20].

In mice, borage oil treatment protected against heart failure and heart attacks. Unlike other drugs and anti-inflammatory medicine, borage oil did not leave deformations or scars in heart tissue [21].

A borage oil diet in mice also reduced plaque buildup in the arteries that lead to coronary heart disease. The high amount of fatty acids in the oil reinforce cell membranes and blood, which is associated with improved heart health [22].

In an 18-month study of 150 participants, the participants who took borage seed oil capsules had fewer rheumatoid arthritis symptoms [23].

A GLA-rich diet reduced acute and chronic (long-term) inflammation in rats with arthritis [27].

Borage oil contains high levels of omega-6 fats that are vital to the proper structure and function of the skin barrier [28].

In another study of 32 children with eczema, wearing undershirts coated with borage oil for 2 weeks improved their skin barriers. They also had relief from itch [30].

About 2 g of borage oil supplements a day increased skin hydration and reduced skin roughness and scaling in a study of 45 healthy women with sensitive and dry skin [31].

However, another study of borage oil supplements found no improvement to atopic dermatitis in 160 patients [32].

The following purported benefits are only supported by limited, low-quality clinical studies. There is insufficient evidence to support the use of borage oil for any of the below-listed uses. Remember to speak with a doctor before taking borage supplements or using topical borage creams, and never use them in place of something your doctor recommends or prescribes.

In mice with an induced-brain decline, borage extract treatment helped maintain their brain function. Borage constituents reduced oxidative stress in the brain and therefore may be used for the treatment of memory impairment and Alzheimer’s disease [36].

Ingesting 5 mL of borage extract 3 times daily for 1-month improved symptoms of coughing, shortness of breath, mucus production, and airway narrowing in a study of 38 patients with moderate asthma. In addition, asthmatic flare-ups and trips to the emergency room decreased significantly over the course of the study [38].

In a study of 50 obese subjects, consuming 5 g of borage oil daily for 33 months of borage oil helped formerly obese individuals reduce the amount of weight that they gained back [39].

No clinical evidence supports the use of borage for any of the conditions listed in this section. Below is a summary of the existing animal and cell-based research, which should guide further investigational efforts. However, the studies listed below should not be interpreted as supportive of any health benefit.

Osteoporosis is the weakening of bone and loss of bone density. As bones become more brittle, one becomes more susceptible to breaks and injury.

Borage extract stopped the growth of Staphylococcus, the virus that causes staph infection [44].

In a study of 72 subjects, individuals that regularly consumed borage developed stomach cancer at one third the rate of those who didn’t [45].

In another study, small silver compounds from borage leaf extract reduced cancer cell growth, though cell studies are not useful when attempting to determine whether borage supplements are of any use to cancer patients [48].

Studies on borage should be taken with caution due to the minimal amount of human trials reported. There are not many publications on the side effects of long-term use.

Commonly reported side effects include [33]:

Borage may induce labor and harm fetal growth or cause abortion. Pregnant women should avoid borage [49].

Borage supplements may negatively interact with anticonvulsants in elderly patients [50].

To avoid adverse effects and unexpected interactions, talk to your doctor before using borage oil.

There is no safe and effective dose of borage seed oil because no sufficiently powered study has been conducted to find one. However, most studies used less than 2,000 mg a day [23].

Many users report that borage improves skin appearances and clears the redness and itch of eczema. Additionally, improvements in inflammation have also been reported.

Women note relief from PMS and menopause symptoms provided by taking borage. However, scientific studies have not shown any effect on PMS symptoms [51].

Other users state that they did not see any health benefits at all.

Homeopathic Belladonna: What is it & Does it Work?

What are Capers Good For? 10 Potential Benefits + Nutrition