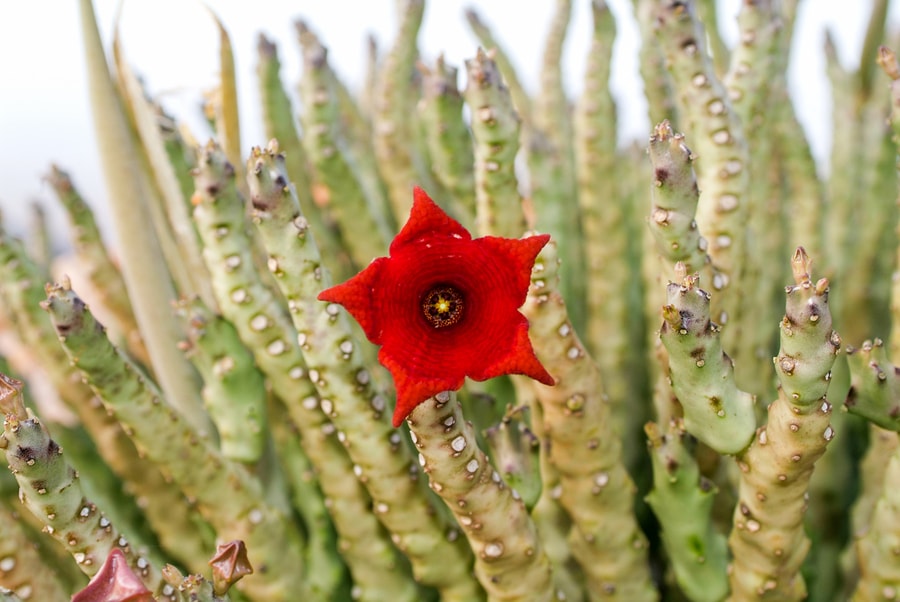 For centuries, Caralluma fimbriata has been used in India as a hunger and thirst blocker. Although the extract is mainly used for weight control, recent studies have revealed other potential benefits such as its antioxidant, energy-boosting, and glucose-lowering activities. Read on to learn about the health benefits of Caralluma fimbriata, how it works, and potential side effects.

What is Caralluma fimbriata?

Caralluma fimbriata (also known as Caralluma adscendens var. fimbriata) is a cactus-like plant belonging to the Apocynaceae family. It is native to India and Africa and highly abundant.

In India, it has been used for centuries in times of famine and long hunts to reduce appetite and thirst. The plant is typically eaten raw or cooked with spices, as well as preserved in chutneys and pickles [1].

Caralluma fimbriata is a very popular solution for bodyweight control. Commercial examples of weight loss capsules containing its extract include [2]:

The composition analysis of the stems, leaves, flowers, and fruits (aerial) of Caralluma fimbriata revealed the following elements:

Caralluma fimbriata has a remarkably high concentration of fiber, which is an essential component of digestive health.

The key active compounds in the Caralluma plant family include [4]:

Natural Sources and Forms of Supplementation

Caralluma fimbriata is traditionally eaten raw, cooked, with spices, or preserved in chutneys and pickles [3].

Currently, there are several supplements containing Caralluma fimbriata extract on the market. In combination with a suitable diet, they are claimed to help lose weight.

Although the mechanisms by which Caralluma fimbriata’s pregnane glycosides work are not fully understood, these compounds have been suggested to:

Effect of pregnane glycosides on the formation of fatty acids [2].

Caralluma fimbriata has been reported to reduce blood glucose levels by [8, 9]:

Due to the scarcity of clinical studies, Caralluma fimbriata is not approved by the FDA for medical use. Nevertheless, preliminary research suggests there might be some benefits.

Caralluma fimbriata has high amounts of fiber (15%) and is a good source of this plant component when eaten as a vegetable [3].

Fiber has several health benefits, such as increasing the digestive transit, facilitating nutrient uptake and digestion, and protecting from diseases [10].

Because Caralluma fimbriata supplements may contain lower fiber amounts and their standard dose is only 1 gram per day, their contribution to the digestive system may be irrelevant.

In another trial on 50 overweight people, the same amount taken for 60 days reduced waist perimeter and appetite. However, the extract had little or no effect on body weight and fat, hip perimeter, and energy intake [1].

However, Caralluma fimbriata extract was ineffective at reducing weight or appetite in another trial on 89 overweight people [12].

The Prader-Willi Syndrome is a hereditary disease causing excessive appetite, learning disability, and short height. In a clinical trial on 15 children with this syndrome, 1 gram of Caralluma fimbriata extract per day for 4 weeks reduced appetite and food intake [13].

In rats fed a normal diet, dietary Caralluma fimbriata extract increased food and water intake. Regardless, the rats lost weight. The extract was thought to interfere with the absorption of fats and sugars, thus preventing weight gain [16].

Caralluma fimbriata extract blocked the growth of fat cells. This effect was seen most at high doses (over 100 μg/ml) [17].

Caralluma fimbriata could also help release energy in the form of ATP if it were effectively proven to promote fat burning. However, only two of the trials suggest the extract may help lower body fat (based on the slight reduction of the waist and hip perimeter) [1, 11, 18].

In rats fed a high-calorie diet, Caralluma fimbriata extract increased the activity of the enzyme creatine kinase in muscles. This enzyme transforms ATP to phosphocreatine, which is then transported to tissues with higher energy demands. By activating this enzyme, Caralluma fimbriata may enhance the efficient use and transport of energy [9, 19, 20].

All in all, the evidence to suggest that Caralluma fimbriata helps lose weight and boost energy is insufficient. There are only 4 small clinical studies and they produced mixed results. Importantly, some of the studies could be biased because they were funded by the company selling the extract used (Gencor Pacific Group) and the results of the most reliable one were negative.

Researchers are investigating other health effects of Caralluma fimbriata. However, these preliminary results have only been obtained in animals and cells, and may not be the same in humans.

High-calorie diets cause oxidative stress and cell damage. Caralluma fimbriata extract had the following protective effects in the testicles, kidneys, and liver of rats [22, 23, 15]:

Caralluma fimbriata extract protected the testicles, kidney, and liver from the effects of a high-fat diet. In testes, it prevented the following abnormalities in testes [22]:

In the kidneys, Caralluma fimbriata prevented the following symptoms of kidney failure [23]:

Because it increases the availability of ATP, Caralluma fimbriata extract may help gain lean muscle weight through exercising [25].

In rats fed a high-calorie diet, the intake of Caralluma fimbriata extract restored normal muscle appearance, with the absence of injuries and fat accumulation [9].

In a study in mice, the extract of Caralluma fimbriata improved object recognition and spatial memory. It also reduced anxiety (elevated maze test) [26].

The extract of Caralluma fimbriata killed the bacteria Escherichia coli, Bacillus subtilis, and Staphylococcus aureus, the fungi Aspergillus niger and Candida albicans, and the worm Pheretima posthuma in plate studies [27, 28].

Its efficiency against the fungi and the worm was comparable to that of the standard drugs miconazole nitrate and piperazine citrate, respectively [28].

It’s important to note, however, that these are very preliminary results that have not yet been studied in humans or even in animals. Further research should determine if Caralluma fimbriata is effective against infections caused by these organisms.

Caralluma fimbriata extract hasn’t been proven to treat or prevent cancer and only killed colon cancer cells in a study [29].

However, many substances – including downright toxic chemicals like bleach – have anti-cancer effects in cells. This doesn’t mean that they have any medical value. On the contrary, most substances (natural or synthetic) that are researched in cancer cells fail to pass further animal studies or clinical trials due to a lack of safety or efficacy.

Most of the health claims above described have only been tested in cell and animal studies. Studies with humans are therefore needed to confirm the benefits of Caralluma fimbriata [9, 22, 23, 24].

New clinical trials with more patients are needed to confirm the potential benefits of Caralluma fimbriata in weight control [30, 31, 11, 1].

It should be noted that several of the studies included were performed by companies manufacturing or funding the manufacture of Caralluma fimbriata [32].

Keep in mind that Caralluma fimbriata is an insufficiently researched supplement with a relatively unknown safety profile. The list of side effects below is, therefore, not a definite one. You should consult your doctor about other potential side effects based on your health condition and possible drug or supplement interactions.

In a study with 50 overweight people, 24% experienced one or more of the following side effects [1]:

The symptoms were mild and disappeared within a week.

In another study on 89 overweight people, 2-12% of the subjects suffered from one or more of the following symptoms [12]:

However, the frequency of people experiencing these effects was similar in the test and the placebo groups.

The research on Caralluma fimbriata is limited and no interactions with drugs have been described so far. Further clinical research may identify new interactions and contraindications.

Insufficient research has been done on the effects of Caralluma fimbriata extract intake during pregnancy and breastfeeding, so it is recommended not to use it with these conditions.

Because Caralluma fimbriata is not approved by the FDA for any conditions, there is no official dose. Supplement manufacturers and users have established unofficial guidelines based on trial and error.

Based on a safety study and the historical use of this plant in India without any reported adverse effects, Caralluma fimbriata extract was assigned the Generally Recognized As Safe (GRAS) status in 2006. However, it’s important to note that no long-term safety studies have been carried out [2].

The opinions expressed in this section are solely those of Caralluma fimbriata users who may or may not have medical or scientific training. Their reviews do not represent the opinions of SelfHacked. SelfHacked does not endorse any specific product, service, or treatment.

A number of users reported that the daily use of Caralluma fimbriata reduced appetite within a week or two of use. Reported weight loss was, however, mild.

Other users said that it did not reduce appetite but did improve energy levels. Some people experienced improvements in portion control and snacking. Others said cravings for sweets were not affected.

One user finished the entire bottle without seeing any benefits in weight at all.