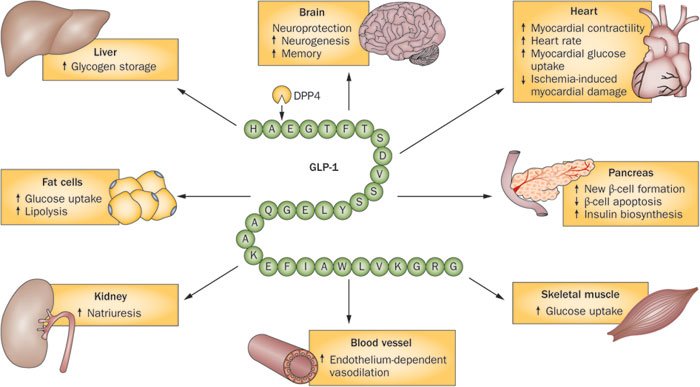 Scientists think that glucagon-like peptide 1 (GLP-1) helps the body release insulin and keep blood sugar in check. Discover the science behind this hormone and whether certain natural factors can increase it.

Disclaimer: The aim of this post is to describe the scientific findings related to GLP-1. It includes some information about the clinical use of GLP-1 agonists as anti-diabetic medications. Please discuss your medications and symptoms with your doctor.

Researchers describe Glucagon-Like Peptide-1 (GLP-1) as both a neuropeptide and an incretin [1].

A neuropeptide is a peptide compound that has an effect on the nervous system. An incretin is a metabolic hormone that reduces glucose levels in the blood after meals.

Note that GLP-1 is not the only hormone that affects blood sugar regulation and insulin production.

Many other important enzymes like DPP-4, hormones – such as glucagon, growth hormone, epinephrine, cortisol, sex hormones, and thyroid hormones – and other pathways also impact blood sugar and insulin balance.

Plus, blood sugar control can involve many other possible factors – including blood chemistry, environment, health status, and genetics – that may vary from one person to another.

GLP-1 has received widespread scientific attention due to its involvement in insulin and blood sugar control. That’s how a new class of medications was born, which are called GLP-1 agonists. These medications are typically given as injections (with the exception of semaglutide) [1].

Doctors may prescribe GLP-1 agonists to people with type 2 diabetes who have poor blood sugar control and are taking anti-diabetic therapy by mouth.

Side effects of GLP-1 agonists include weight loss and nausea [2].

GLP-1 agonists have been associated with asymptomatic pancreatitis and pancreatic cancer in limited studies, but this association is still being studied [3].

DPP-4 inhibitors are another class of anti-diabetic drugs. They reduce the activity of an enzyme called DPP-4, which deactivates GLP-1 and another incretin called insulinotropic polypeptide (GIP). Both GLP-1 and GIP are released after meals to reduce blood sugar [4].

Thus, these drugs support glucose balance and GLP-1 activity in the body. DPP-4 inhibitors include:

If you have diabetes, your doctor will discuss your medication options with you in detail, including the potential use of GLP-1 agonists or DPP-4 inhibitors.

GLP-1 seems to delay stomach emptying, which slows down glucose spikes and makes it easier for the body to maintain blood sugar levels right after a meal [10].

In animals with diabetes, GLP-1 agonists improve the function of insulin-producing beta cells in the pancreas. Scientists think that these drugs have the potential to regenerate pancreatic cells, but this hasn’t been proven in humans [11, 12].

Before GLP-1 agonists were discovered, scientists explored the effects of unchanged GLP-1 injections in diabetics [14].

However, GLP-1 has a very short half-life of about 1.5 minutes and is rapidly suppressed by an enzyme called dipeptidyl peptidase-4 (DPP-4). GLP-1 agonists were developed to overcome these issues and achieve long-term sugar control [16, 14].

Some scientists hypothesize that GLP-1 decreases appetite by acting on specific areas in the brain. One side effect of GLP-1 agonists is weight loss, which is usually desired in patients with type 2 diabetes. However, GLP-1’s effects on weight haven’t been properly verified in humans without diabetes [1].

In fasted rats, GLP-1 appeared to produce a feeling of satiety. The authors posited that GLP-1 in the hypothalamus reduces food intake [17].

One animal experiment used chocolate milk to tempt animals. They suggested that GLP-1 reduces the excitement of eating food–called the anticipatory food reward, which may result in a decrease in appetite and motivation toward food [18].

GLP-1 in mentioned in our post about hormones implicated in weight control.

We can’t apply animal findings to humans, so we have yet to see if this hormone really reduces appetite and weight in people who struggle with obesity.

Many substances that are initially claimed to cause weight loss in animals fail further clinical research.

Let’s remember leptin was initially called an “obesity wonder drug” based on animal experiments. Well, it turned out that leptin actually better fits the nickname “fat hormone” and we’re still in the dark as to what it exactly does in the human body. GLP-1 obesity research might face a similar fate.

A study on rats suggested that GLP-1R in the hippocampus enhanced learning and memory. According to one unproven hypothesis, GLP-1 might be involved in protecting the brain from seizures and neuronal damage. If proven true, this would add to our knowledge about the gut-brain connection [19].

A GLP-1 agonist and anti-diabetic drug, exenatide, is also being researched in neurogenerative disorders. Given to 45 patients with Parkinson’s disease, exenatide seemed to improve motor and cognitive symptoms compared to the control. Side effects were weight loss and nausea. Large-scale studies are needed [2].

Some scientists have proposed that the potentially protective properties of GLP-1 agonists should also be researched in Alzheimer’s disease [20].

In lab animals, GLP-1 seems to improve mood and anxiety. It is hypothesized to activate orexin, which increases wakefulness. However, the impact of GLP-1 on mood and wakefulness in humans is unknown [21].

GLP-1 may also be involved in some potentially detrimental pathways. In some animal studies, GLP-1 appeared to increase the stress response and anxiety [22, 21].

Another animal experiment suggested that GLP-1 and GLP-1R may be responsible for increased blood pressure and heart rate in response to stress. The authors believe that this may be connected to maintaining energy balance [23].

Factors that May Increase GLP-1

If you’re struggling with obesity or high blood sugar, it’s important to schedule a visit with your doctor.

He or she should diagnose, treat, and monitor any underlying conditions causing your symptoms.

It’s uncertain whether any natural factors can increase GLP-1. Some of the complementary approaches listed below may help support metabolic and overall health.

That said, you may try them if you and your doctor determine that they could be appropriate.

Remember that none of them should ever be done in place of what your doctor recommends or prescribes.

Have in mind that the above-listed factors are experimental. They aren’t backed up by solid science and their impact on GLP-1 in humans is still unknown.