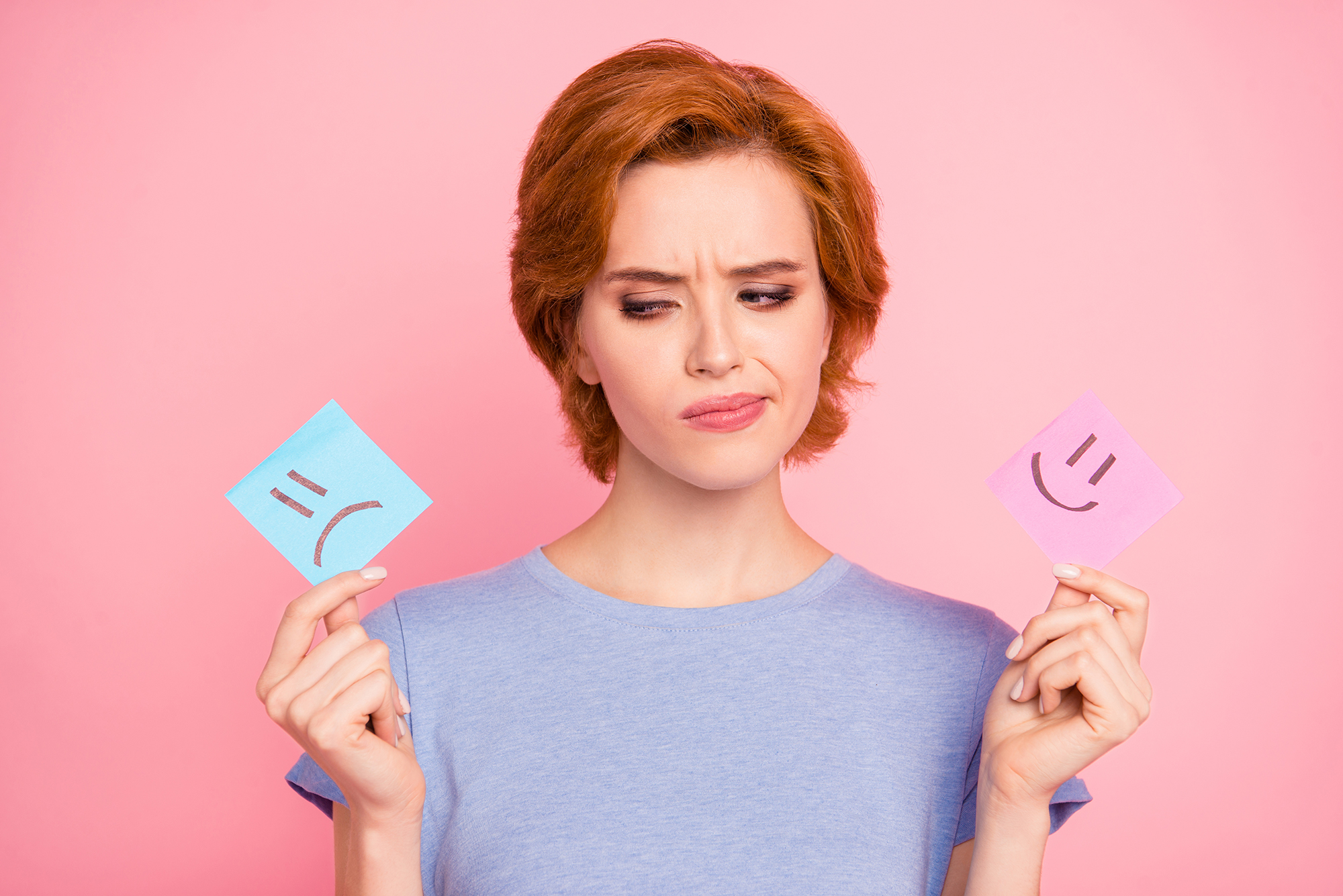 Certain species of probiotics have improved mood, reduced stress, and even increased cognitive function in human studies. How does it work, and what are the limitations? Find out here.

There is an intriguing connection between the gut flora and the brain, which scientists have yet to fully unravel. In the meantime, some intriguing evidence suggests that beneficial probiotic species can improve mood, reduce stress, and even make it easier to fall asleep. In this post, we’ll explore the research behind these potential benefits; remember to talk to your doctor before starting a new probiotic.

The vast number of microorganisms in our intestines may have a major impact on our state of mind [1]. Gut microorganisms are able to produce and deliver such neuroactive substances as serotonin and gamma-aminobutyric acid (GABA) [1].

One study found an inverse association between constipation and feelings of calmness, elatedness, and agreeableness, i.e. frequent constipation was associated with a poorer mood state. A probiotic multivitamin compound significantly improved the general condition of participants, with a 41% improvement in stress, a 29% decrease in the prevalence of infection and a 91% reduction in GI discomfort [3].

In another study, probiotic yogurt improved the mood of those with an initially poor mood [1].

Consuming a probiotic yogurt or a multispecies probiotic capsule for six weeks had beneficial effects on the mental health biomarkers of petrochemical workers [1].

L. casei lowered academic-stress-induced increases in cortisol and the incidence of physical symptoms in student volunteers [4].

Similarly, when L. casei was administered to medical students undertaking an authorized nationwide examination to test their response to stress, this bacterium increased serotonin levels, lowered the rate of subjects experiencing common abdominal and cold symptoms, and decreased the total number of days students experienced these symptoms [5].

Some probiotics may reduce stress by decreasing cortisol and increasing serotonin.

One study found a correlation between human microbiota and depression. Probiotics significantly decreased depression scores in both healthy individuals and patients with major depressive disorder under 60 years of age [1].

L. helveticus and B. longum reduced depression in healthy volunteers who regularly took these probiotics [1].

A mix of L. acidophilus, L. casei and B. bifidum decreased depression, and in addition lowered insulin levels, insulin resistance, and hs-CRP, and increased glutathione levels in patients with major depressive disorder [7].

B. infantis, L. helveticus and L. rhamnosus each improved symptoms of depression in rats [1, 8].

Chronic administration of B. infantis appears to protect rats from depressive symptoms caused by stress induced through maternal separation [9].

Disrupted human gut flora composition has been linked to depressive states, and some probiotic species may improve symptoms of depression.

L. helveticus and B. longum decreased anxiety and anger/hostility in human volunteers [10].

Infecting healthy mice with pathogenic bacteria stimulates anxiety behaviors within hours of infection suggesting that changes in the gut microbiota can very quickly induce biochemical changes in the brain [3].

Probiotic treatment with L. helveticus improved anxiety-like behavior in rats [8, 11], and prevented the negative effect of Western-style diet on anxiety and memory in mice [12].

Daily voluntary wheel-running and sleep rhythmicity became intensified in mice when heat-killed L. brevis was added to the diet [20].

Gut probiotics play a major role in the bidirectional communication between the gut and the brain [1], referred to as the “microbiota-gut-brain” axis. It is now generally accepted that the composition of the microbiota can affect behavior and modulate cognitive function in ageing people [13].

In one study of 60 Alzheimer’s patients, milk containing a blend of probiotics positively affected cognition after 12 weeks [21].

According to animal studies, some probiotics may improve both spatial and non-spatial memory [22]. The administration of probiotics considerably improved the impaired spatial memory and efficiently reversed deteriorated brain in diabetic rats [23, 13].

Germ-free mice display deficits in non-spatial and working memory. Also, mice that were exposed to gut bacterial infection and stress exhibited memory deficits, while probiotic treatment 7 days before and during the infection prevented cognitive dysfunction [13].

L. plantarum improved learning and memory in rats with vascular dementia, by acting as a blood pressure-lowering and neuroprotective agent [26].

The composition of the gut flora affects cognition and behavior in ageing humans, and probiotic supplements improved cognitive function in Alzheimer’s patients. The benefit of probiotics to healthy humans is unknown.

There is a potential role for intestinal microorganisms in the complex pathophysiology of autism spectrum disorder (ASD). Treatment of an autism mouse model with probiotics ameliorated ASD-related traits [13].

In an animal model of social deficits in offspring, L. reuteri was found to be 9X lower. Supplementing with it increased oxytocin levels and significantly improved sociability and preference for social novelty in mice offspring [29].

Daily administration of B. longum reduced signs and symptoms of a model of schizophrenia in mice, decreased the resting level of plasma corticosterone and the ratio of kynurenine to tryptophan [30].

B. breve and C. butyricum increase BDNF in rats and mice, respectively [31].

In humans, the gut flora and brain interact in surprising ways. Dysregulated gut flora can result in stress, anxiety, and depression, and certain probiotic supplements have improved mood and reduced markers of mental illness in clinical trials.

In humans, probiotics have been linked with improved mood, better sleep, and reduced stress. In Alzheimer’s patients, a probiotic blend even improved cognitive function.